While most of society is shut down, many people who are staying at home have channeled their unexpected free time into reading, baking, watching movies and starting new hobbies.

Professors and staff at St. Edward’s are carving out moments to read for pleasure or catch up on Netflix. We asked them what they’re focusing on when they’re not working (or watching Tiger King or playing Animal Crossing). Here are their recommendations.

If you want to get far, far away from it all

“I’ve been watching Star Trek: Picard (and am excited for Season 3 of Discovery) and Frozen 2 (with the toddler). Also trying to learn ‘Let it Go’ on the piano, with limited success so far.” —Katy Goldey, assistant professor of Psychology and Behavioral Neuroscience

“I have read A LOT in the past month, with a heavy tilt toward fantasy and escapist lit. Recommend The Starless Sea by Erin Morgenstern for something that will take you far away and take a very long time (500+ pages) to do so.” —Nicole Hill, IT client engagement and content strategist

“I just finished my advance copy of Age of Empyre, the final book in Legends of the First Empire fantasy series by Michael Sullivan. Stayed up way past my bedtime to finish last night...couldn’t help myself. If you like fantasy novels at all, I highly, highly recommend anything by Michael Sullivan.” —Jessica Boyette-Davis, associate professor of Behavioral Neuroscience

“I am enjoying The Mirror and the Light, the final book in Hilary Mantel’s Wolf Hall trilogy about Tudor England. It’s dense, and I only make through a few pages a night, but it’s beautifully written.” —Mity Myhr, Professor of History 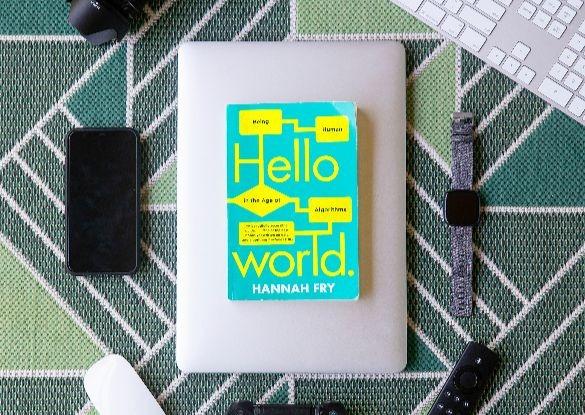 Every year, St. Edward’s chooses a Common Theme that all freshmen read and discuss in Freshman Seminars. Along with your classmates, you’ll attend events and programming around the theme. For fall 2020, we're excited to announce the selection: Hello World: Being Human in the Age of Algorithms by Hannah Fry.

“The Common Theme gives me a connection with other people, especially as a freshman. It’s an easy conversation starter,” Alexia Avalos ’23, a Video Game Development major.

If you want to be productive

“I’ve been reading the books piling up on my nightstand, including Hello World: Being Human in the Age of Algorithms by Hannah Fry, the common text for the next academic year. It looks at how computer algorithms are shaping fields like medicine and criminal justice and influencing the choices available to humans.” —Erin Demse, associate registrar

“I’ve discovered several new podcasts, including Overdue, which features two New York Public Library librarians tackling books that you always meant to read but never did. NPR Life Kit is a great way to engage with current events in a productive way. I’ve also been spending time on Duolingo, both refreshing my Spanish and, with my husband, starting German to prepare for our dream trip to Germany after all this is over. My great-grandparents were German immigrants, and my grandfather spoke a little German, so it also feels like re-connecting with him a bit.” —Nicole Hill, IT client engagement and content strategist

“I’m reading too many news articles for most people’s anxiety levels, since I teach Health Communication. I’m also collecting articles about the controversy about the public wearing protective face masks, which my class discussed in February, for a future article. As a cancer survivor, I was accustomed to wearing masks to protect myself during flu season when getting chemo. At the beginning of the COVID-19 crisis, medical professionals argued that wearing masks could put you at risk because the general public doesn’t know how to use them correctly. Now many governors are trying to convince everyone to wear masks. Is that possible, after the media reported masks don’t help, or could actually harm you? As a communication professional, I find it all fascinating.” —Stephanie Martinez, associate professor of Communication

If you’re interested in art that imitates life, but not too closely

“I just finished Gabriel Garcia Marquez’s Love in the Time of Cholera for a historical feel of people living through plagues.” —Carolyn Palaima, associate director of Sponsored Programs

“I recently finished Margaret Atwood’s Oryx and Crake (although maybe reading a book about a plague-caused apocalypse is not a great idea right now).” —Johanna Jones, product owner in IT Enterprise Information Systems

“Every summer, I reread Man’s Search for Meaning by Viktor Frankl, which provides a bracing perspective from someone who found dignity and agency even in awful circumstances. Thus, it is both humbling and useful. I highly recommend it for any time, but particularly in times when it seems as if we control very little. I might reread it earlier this year.” —Drew Loewe, professor of Writing and Rhetoric

“I’ve been listening to the podcast Terrible, Thanks for Asking, which describes itself as ‘Honest answers to the question, ‘How are you?’” —Liza Manjarrez, associate director of Campus Ministry

“I’m reading American Dirt by Jeanine Cummins, which generated controversy as an Oprah’s Book Club choice. Many people said the author engaged in stereotypes and brownface. It is a work of fiction, but it raised many passionate views on race and authorship in the publishing field. I figure I need to read it if I want to have an opinion about it.” —Stephanie Martinez, associate professor of Communication

If you want to relax

“I’m addicted to a yoga practice for neck and shoulders that director of Wild Basin Barbara Dugelby recommended. It’s from Australia and makes me feel that I have traveled. Great for painful ‘Zoom neck-and-shoulders.’” —Trish Baynham, professor of Biology

“I’ve been watching Gardeners’ World on BritBox — very soothing and therapeutic. And, thanks to a tip from Associate Professor of Biology Lisa Goering, my dogs and I have started watching the ‘Relaxation’ segments on DogTV.” —Lori Peterson, associate professor of Communication

“The lesson of 1941 comedy film Sullivan’s Travels is that, in times of crisis, you need comedy. We rewatched Sullivan’s Travels, and I recommend following it with O Brother, Where Art Thou, whose title is a reference to the earlier film. So I’ve been hitting the NPR book concierge and focusing on funny stuff. One of the books I found, Field Guide to the North American Teenager, is set at a high school in Austin. It’s funny to read about a newcomer adapting to Austin.” —Rebecca Davis, associate vice president for digital learning

If you want to get lost in a good story

“I just finished Broadchurch, which is a great British crime series starring Olivia Colman and David Tennant. Three seasons and absolutely stunning cinematography. I also just got through season 2 of Babylon Berlin, a crime noir show set in 1920s Germany. Entertaining show that contrasts a wonderfully progressive and fun Berlin night life with the rise of Nazism.” —Matthew DeSantis, director for Institutional Assessment