A Different Take on Spring Break

10 Students Share Stories (and Rewards) from Their Alternative Spring Break

At-risk youth in Los Angeles. The children of migrant farmworkers in Kansas. Urban poor in Denver. They’re just a few of the communities that students at St. Edward’s spend time with during Alternative Spring Break (ASB). These one-week experiences give students the opportunity to connect with underrepresented communities across the U.S. and offer a helping hand.

Here, 10 Hilltoppers talk about their recent ASB trips ― what they did, what they learned and what they’ll always remember. Each story is unique, but all have a common thread: the value of service.

I had the most incredible experience leading some fellow Hilltoppers to Mobile to work on a home for the Mitiku family. We were lucky enough to meet Mr. Mitiku, who has lived in Mobile for the past five years. In his home country of Ethiopia, he was a registered nurse. He is now working to attain a nursing degree in the U.S. so he can continue to do what he loves.

Meeting him was a true blessing because it helped connect us to our work. We wanted to produce good work, but the driving force became creating a safe and sturdy home for this family, not just making it aesthetically pleasing. 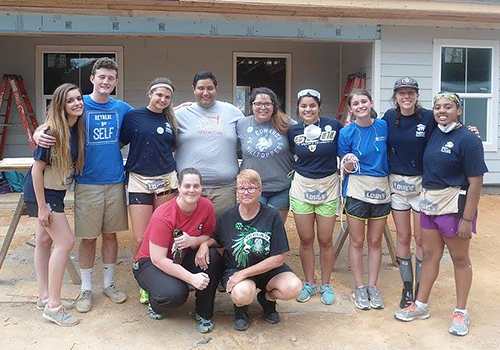 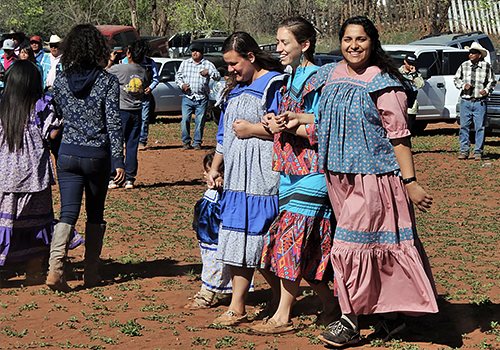 This experience is unlike most because we became completely involved in the customs, spirituality and lives of the community we served, including the social justice issues that affect the Fort Apache Reservation. We visited primary and secondary schools on the reservation and spoke to teachers and principals about issues in education, healthcare and poverty.

We were so moved by the people we met and the community that welcomed us into their culture. One of the best moments was when we were invited to attend a Sunrise Dance. The faith the Apaches have in their beliefs is inspiring. Even among people I had never met before, I can honestly say I felt at home.

Bianca Hernandez ’17, Psychology major
ASB: Urban Immersion Chicago – Chicago, Illinois
Activity: Learned about urban poverty and how it has affected education in the City of Chicago

Our group served at The St. Malachy School, which is for underprivileged and at-risk students, pre-K through 8th grade, in the West Chicago area. When we arrived, the principal told us that the kids at St. Malachy just really need people who will sit down and listen to them.

I was in a kindergarten class for the week, and I could tell how much these children wanted that quality time with each one of us, even if that simply meant sitting next to them during lunch time or holding their hand as they made their way down the hallway. A really fun part of our day was helping during after-school care and being able to be a kid again! 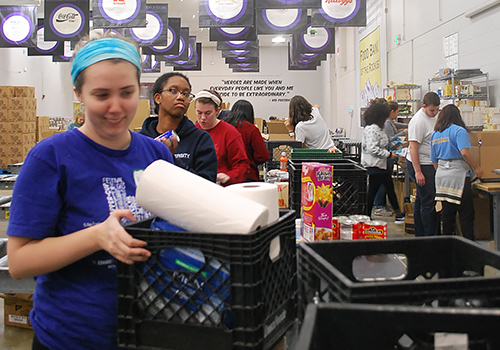 My ASB experience was nothing short of amazing. We challenged ourselves to step out of our comfort zone and into the community around us without judgment and with an open mind. We worked at a food bank, in several day shelters for the homeless, even with Habitat for Humanity.

All of the projects were eye-opening. Seeing thousands of pounds of food that will be given to those who are homeless and realizing that it’s still not enough was stunning. The stereotype of homeless people can just be so wrong. To these people, life happened. They are not on the street by choice, and they are looking for a way out. Thankfully, with the services available to them, a better future is within reach.

I came into this experience wanting to make a difference. What was important to me was the personal connections I might make with the people I was serving, beyond simply doing things for them. We spent several days cleaning, organizing, and cooking meals for Larkin Street Youth, a home for runaway, homeless and displaced youth. We also spent time talking to them and playing board games together.

If I simply said or did one small thing or had one conversation that showed someone who has faced adversity and hardship just a little bit of love and support without judgment, then the whole trip was worth it. It is in these small ways that I believe the greatest impact is often made. 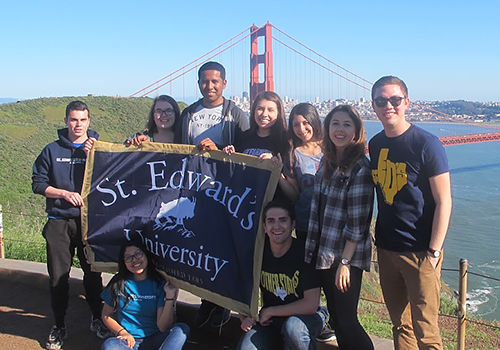 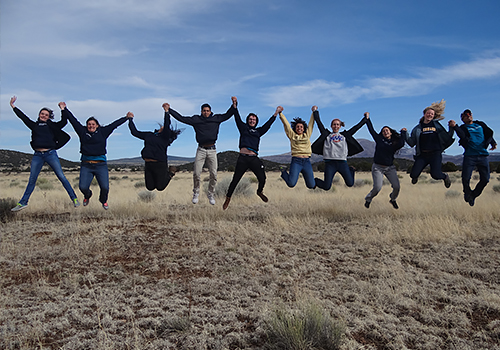 I think the biggest service we provided the guests at Andre House was just talking to them. So often, people experiencing homelessness are ignored, and I think it means a lot to them if you listen to their stories, share in their joys and sorrows, and really be an attentive audience. It all comes back to providing them dignity and respect, which everyone deserves.

A lot of the people I met not only shared themselves with us, but also shared with us what little they had. I remember sitting down to talk to one guest who offered me a water bottle, the only water bottle he had. It has meant so much to me to be able to interact with these people face-to-face.

We learned so much about building a house, from using power tools to understanding the steps of completing a project. We were given lots of autonomy to figure things out on our own and work things out among our group members. We always had a positive attitude because we knew that it was for a great cause, and it was actually really fun!

Having the opportunity to make such a big difference in someone’s life meant a lot to me. The locals were extremely welcoming and grateful to have us there. I think that it gives them hope to see people from around the country coming to help rebuild their community. 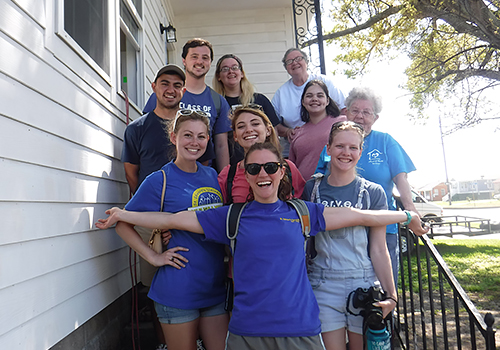 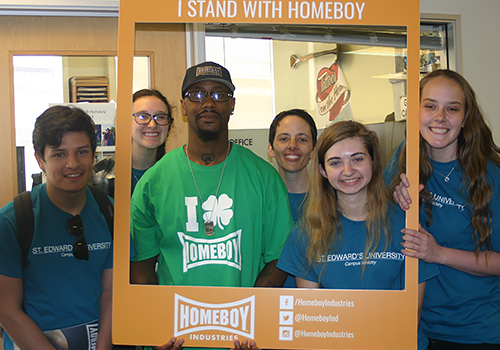 Our group volunteered at Dolores Mission Catholic School, working in the classrooms and helping with Underwings, an after-school program. This was an amazing experience because everyone with the school works so hard to give the children an education. All of the children were very excited to have us there, and it was a great pleasure to work with them.

We also engaged in some service work on Skid Row and made more than 500 hygiene kits for the homeless in the area. We met some amazing people who were very willing to share their stories and experiences with us, and we really had the opportunity to get to know all aspects of the community.

My group's experience was extremely varied from site to site. We worked with three wonderful organizations and were introduced to many more. We learned about the complex issues facing people on both sides of the U.S./Mexico border.

The children and women we met are all so incredibly brave and open to sharing their stories. Even though we were the ones trying to be present and serve the community, they deserve the most credit for making us feel so welcome and inviting us to be a part of their lives, if only for one week. This experience changed my beliefs about the current government response to immigrants and gave me ideas on how the system can improve to acknowledge their basic needs as human beings. 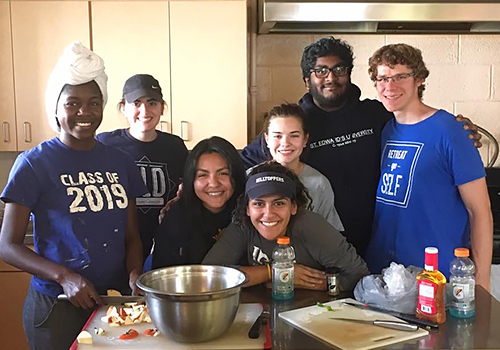 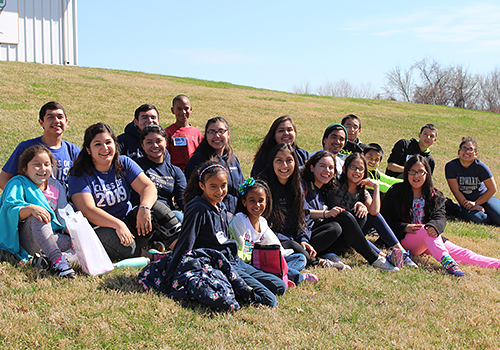 Justin Zuniga ’17, Psychology major
ASB: Si Se Puede – Gerard, Kansas
Activity: Worked with the children of farmworkers in a community dealing with the effects of poverty

Many ASB experiences are in or near a city, but Gerard, Kansas, is made up mostly of crop-fields and cattle. This isolation, along with the removal of our mobile devices, let us focus on our experience on a deep level without outside distractions.

The goal of Si Se Puede is to work with the children of migrant farmworkers, lifting them up with the power of education. We worked with Greenbush, which provides school districts access to educational services that would otherwise be unavailable or unaffordable. The area where we stayed is the most impoverished county in Kansas. This has deeply affected the quality of education there. It made me want to work to fix that problem. If it’s happening there, it’s also happening in other parts of the country.

Camille Saad is a writer for St. Edward's University.