What’s up in the science lab? 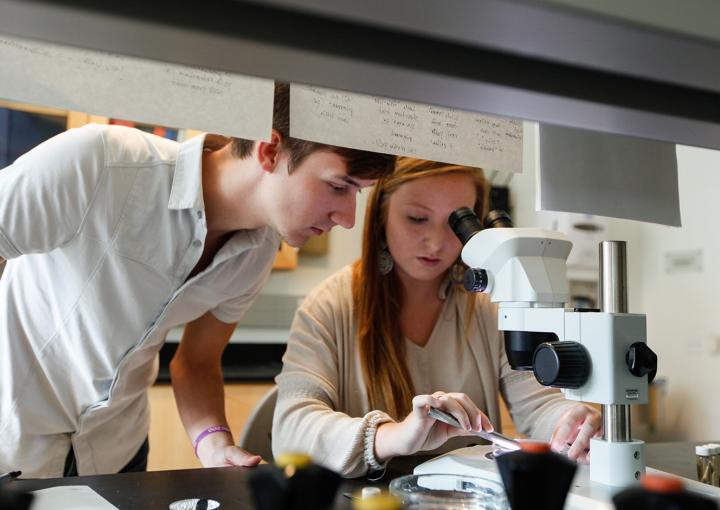 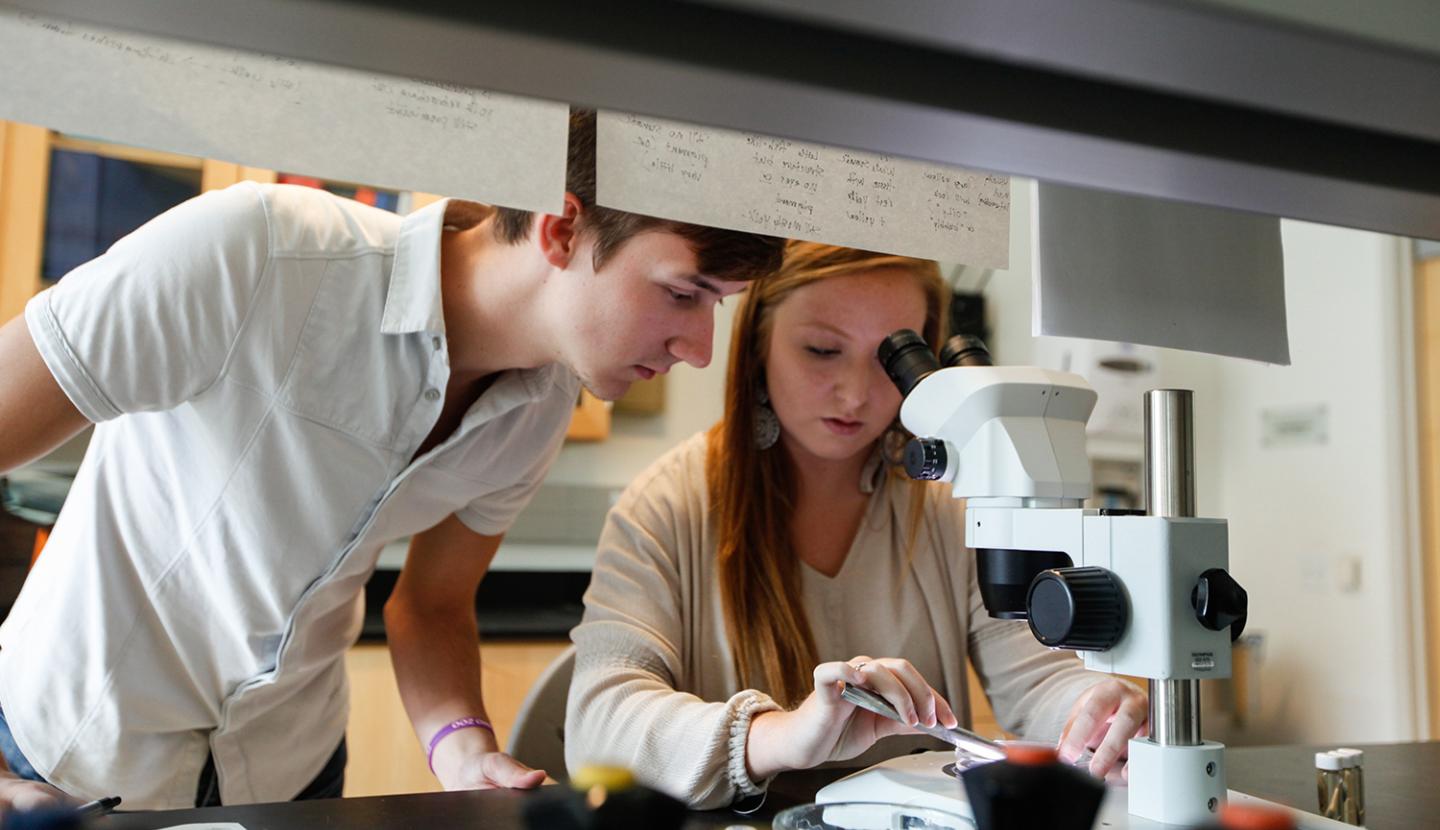 Summer is for sun, sand … and the science lab. Dozens of students at St. Edward’s spent part of their break honing the research skills vital to advancing scientific knowledge — and their careers. Here are 11 of their projects, several of which are continuing in the fall semester. 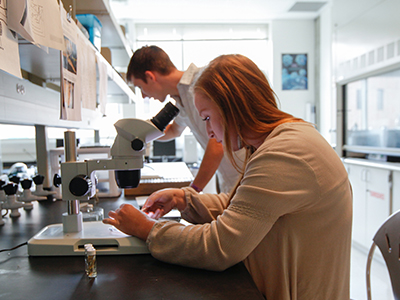 THE PROJECT: Pishner and Matchett put western mosquitofish (Gambusia affinis) into three tanks of water with different concentrations of Imidacloprid, a common ingredient used in insecticides, to replicate how insecticide in freshwater runoff concentrates in streams and lakes. They observed the foraging, mating and aggression behaviors of the fish along with reproductive effects and compared them with fish in a control tank of water without insecticide.

THE BIG PICTURE: Understanding how the insecticide Imidacloprid affects other organisms besides the insects they target.

THE PROJECT: Archey is examining whether cytokine expression — pro- and anti-inflammatory responses in the immune system — is affected by casual use of alcohol or marijuana. Her hypothesis is that binge drinkers will have increased inflammatory responses compared with both recreational marijuana users and abstainers, despite the fact that alcohol is legal and marijuana is not. 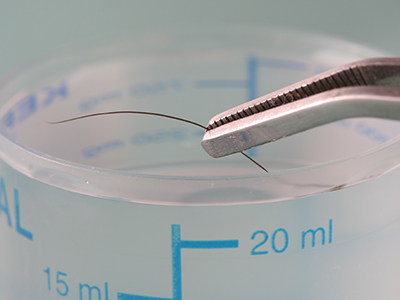 THE PROJECT: Shed pet hair is often found at crime scenes, but it typically isn’t used in investigations because only the hair’s root contains animal-identifying nuclear DNA. Hill is examining whether mitochondrial DNA, which is often present when nuclear DNA is not, could be used to identify the animal — and, by extension, a suspect.

ANOTHER APPLICATION: If Hill’s technique is successful, the research might also be used by pet shows to confirm dogs’ pedigrees.

THE TEAM: Isavannah Reyes ’17, Bioinformatics major, and the protein interaction team in David Baker’s lab at the University of Washington

THE OPPORTUNITY: As part of the Howard Hughes Medical Institute Exceptional Research Opportunities Program, a competitive fellowship that places students in labs across the country, Reyes was placed in a biochemistry lab at UW in Seattle.

THE PROJECT: Reyes studied a protein called TrkA, which has implications in cancer and pain sensitivity, with the goal of improving the process of protein design. She designed an interface — where a protein would bind to another protein — for it from scratch, on a computer. In the future, if the interface were synthesized and did successfully bind to TrkA, this information could be used to improve the design protocol for many other proteins.

THE BIG PICTURE: The protein binder could be used to create drugs that not only stop disease but improve health. 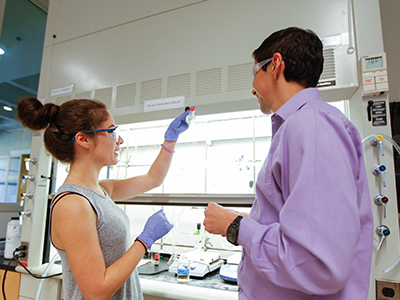 THE PROJECT: The team wanted to understand the workings of the enzyme Nickel ARD, which is associated with hepatitis and prostate cancer. To study Nickel ARD, the team needed to synthesize small molecule  replicas of the enzyme so they could study how structure affects reactivity.

THE BREAKTHROUGH: The two molecules Ivan and Sanchez made have never been synthesized before and are closer to the design of the enzyme than anything that’s been made in a lab.

THE PROJECT: The team wanted to find out whether winning or losing in a competitive situation has an effect on testosterone levels. They administered an online survey gauging subjects’ moods after imagining different win and loss scenarios, and measuring aggressive thought and risk tolerance.

PRELIMINARY RESULTS: “High investment condition,” in which participants cared about the outcome of the win/loss scenario, had the biggest impact on creating positive mood changes. The actual outcome, winning or losing, did not have an impact.

THE NEXT STEP: Measuring testosterone via saliva samples in the lab. 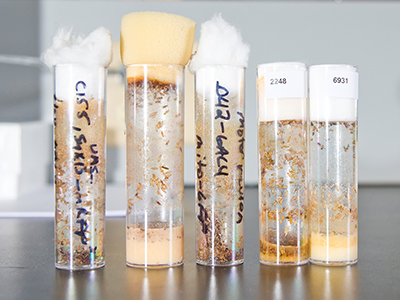 THE PROJECT: The team raised three groups of fruit flies on diets with varying levels of protein, and then compared several indicators of reproductive capacity among females in the groups. Preliminary data suggest that malnourished female fruit flies lay fewer eggs and provide less nutrition for offspring than control groups.

THE BIG PICTURE: The research could one day give insights about nutrition during pregnancy.

THE OPPORTUNITY: As part of a competitive National Science Foundation — funded Research Experience for Undergraduates, Stewart worked in the horticulture department at Michigan State University.

THE PROJECT: Stewart wrote computer programs to analyze plant DNA and determine the function of different parts of the DNA. He found that these previously unknown regions of the DNA were controlling gene expression: regulating how the plant behaves and reacts to environmental stresses. 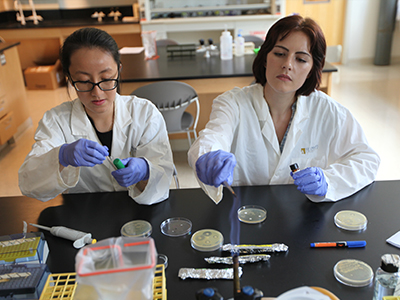 THE PROBLEM: Antibiotics and antibacterials work by killing bacterial cells, but they can target a variety of different parts of the cell — and sometimes scientists don’t know exactly what parts. Meanwhile, bacteria are developing resistance to known antibiotics, resulting in thousands of deaths each year.

IMPLICATIONS: Researchers could eventually compare cells killed by antibiotics whose methods aren’t understood to those whose methods are known, to figure out how the antibiotic works. They can combat antibiotic resistance by finding new pathways in the cell that haven’t yet been targeted by antibiotics. Plant extracts that inhibit bacterial growth could be developed into new antimicrobial drugs to help combat resistant bacteria.

THE PROJECT: Existing research suggests Western society finds a particular waist-to-hip ratio, sometimes called an “hourglass shape,” most attractive in women. The team wants to find out if a “thigh gap” — the space between a woman’s legs, which is trending in pop culture and sometimes leads to unhealthy diet practices — also influences sexual attraction.

PRELIMINARY RESULTS: Men and women of different sexual orientations showed no significant difference in attraction to women with a small thigh gap, though women tend to prefer a slightly larger thigh gap than men. 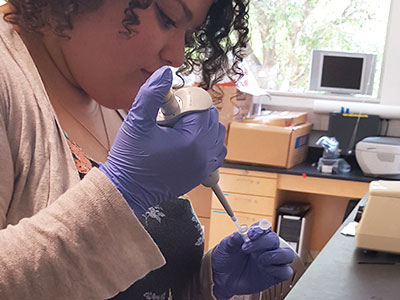 THE PROJECT: The team examined the effectiveness of processing DNA profiles using current and new methods on crime scene-based samples that have been enhanced with chemicals. Specifically, the project compared two DNA processing methods on porous surfaces such as paper and carpet using  Ninhydrin, a chemical enhancer that reacts with amino acids to make evidence like fingerprints or blood more easily visible.

PRELIMINARY RESULTS: The newer DNA processing method, which eliminates a step, is not only faster but yields better results. The use of Ninhydrin at an investigative site does not affect investigators’ ability to obtain a DNA profile.

Visit The Hilltop This Fall