From Panama to the Hilltop

Sending your child to a university can be stressful under the best of circumstances. When that university is nearly 2,000 miles away from your home, and only three students on campus are from your country, many parents would be understandably nervous. But Celia Diaz and Rolando Domingo were confident that their oldest daughter, Aida Domingo ’19, belonged at St. Edward’s.

Both Celia and Rolando went to school outside their home country of Panama, and they wanted Aida to experience living and learning in another country. They appreciate the openness of the American people and the many opportunities students have here, especially in a well-connected city like Austin.

Even though Celia’s four older brothers attended St. Edward’s in the 1960s, she had largely forgotten about the school until she and Rolando met David Bernay at a college fair in Panama City. Bernay, the associate director of Admission at St. Edward’s, explained how St. Edward’s has grown from an all-male institution to a coeducational school with students from all over the world. His enthusiasm convinced the family to explore whether St. Edward’s would be a good fit for Aida.

The more they learned about St. Edward’s, the more they liked it. Intrigued, Rolando offered to host an open house where representatives from St. Edward’s could meet with interested Panamanians — including Rolando and Celia’s family — and answer questions. After spending time with Bernay and his colleagues, Celia and Rolando knew they’d found the right place. 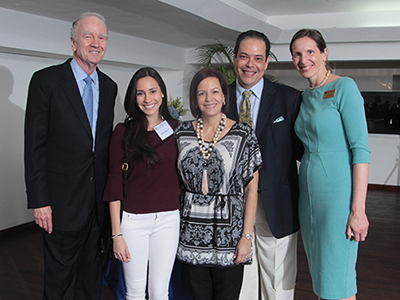 “One of the advantages of living in small countries in Latin America is that, for example, you can have a personal relationship with the head of the school,” Rolando says. “St. Edward’s has that same kind of environment. I love how accessible people are here. You’re not emailing someone without a face. You know the people.”

After Aida enrolled, Celia and Rolando kept spreading the word to their fellow Panamanians. And they’ve continued as ambassadors for St. Edward’s ever since. The largest event they have hosted to date had a guest list of 80 individuals: alumni, families of current students and prospective students, high school counselors and university administrators — including St. Edward’s University President George E. Martin.

“When Dr. Martin gave a speech about how St. Edward’s educates the heart and the mind, it was this ‘wow’ moment — I knew our values were the same,” Celia says.

“People ask me, ‘Why are you promoting the university?’” Rolando adds. “Aida is very happy here. I want to offer this beautiful experience and these advantages to other students.”

As for Aida, she’s thriving in her new home. “I love the huge international community here at St. Edward’s,” she says. “The fact that there is such a large diversity of people and cultures makes it so much easier to make friends.”

4 Smart Reminders for Juniors and Seniors

A Study in Contrasts