Dozens of international representatives gathered at St. Edward’s University in November for a two-day forum on the subject of “Exploring the Religious-Policy/Security Nexus in Responding to Critical Contemporary Religious/Global Challenges.” 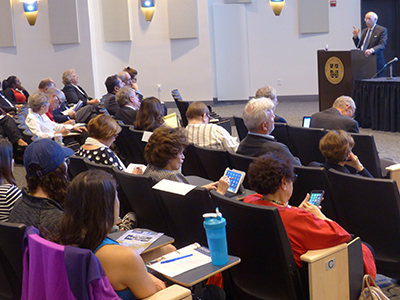 The conference brought academic experts, policy officials, security practitioners and religious leaders from nine countries to the St. Edward’s University campus to share perspectives on collaborating with religious communities to address important security issues and threats. More than 200 university students, faculty, staff and members of the Austin community participated in the discussions with the visiting conference contributors. 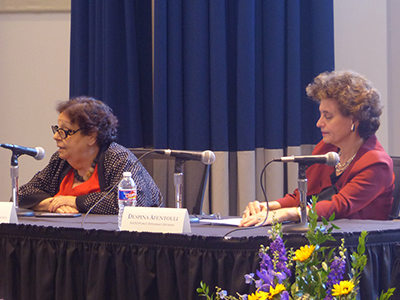 “By facilitating exchanges among experts representing different nations and regions, we hope to strengthen networks of collaboration for addressing the most critical security challenges facing humanity in this century,” said Sharyl Cross, director of the Kozmetsky Center, which serves as a resource for informing the St. Edward’s community and the broader public on critical global topics.

Conference attendees examined complex issues of religion and security from multiple points of view. The wealth of experience and insights they brought produced a significant body of ideas and recommendations to be shared with academic and policy-making communities. 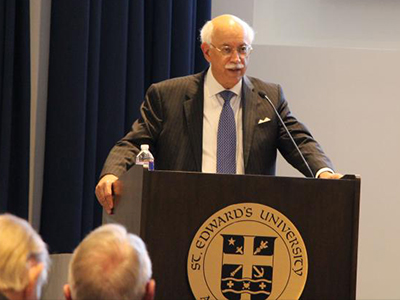 In his keynote presentation, Andrew S. Natsios, director of Scrowcroft Institute of International Affairs and executive professor at George H.W. Bush School of Government, Texas A&M University, framed an over-arching set of issues to prompt the discussions. He warned that the world is entering a period of heightened instability and risk. “Protectionism, isolationism, nativism, religious extremism and ultra-nationalism are growing in all western democracies,” Natsios said. “Understanding the role of religion in the rule of law is imperative as we build new structures of power to support an equitable international order.” 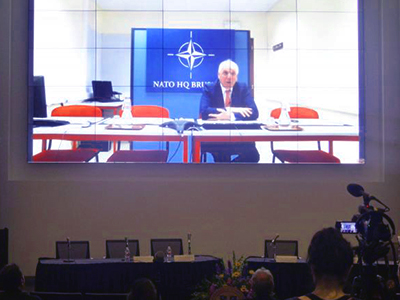 Speaking from NATO Headquarters in Brussels, Jamie Shea, deputy assistant secretary general for Emerging Security Challenges, provided an overview of NATO’s challenges to the East and South, and acknowledged the importance of fostering communication and constructive cooperation with religious actors in addressing the most pressing security issues for the alliance. Shea reflected on the range of issues that must be considered in terms of defining NATO’s responsibilities in countering terrorism, including whether the Alliance should be involved in countering terrorist use of the internet to disseminate their messages or recruit followers. “We [NATO] don’t have the luxury of making a wrong move,” he said.

Shea also expanded on points made by Natsios, reminding participants that the ideals of liberalism, internationalism, freedom and human rights are in the minority in today’s world. “Opening dialogue for understanding across cultures and communities is more necessary than ever,” he said. “We must build mutual trust with local players. 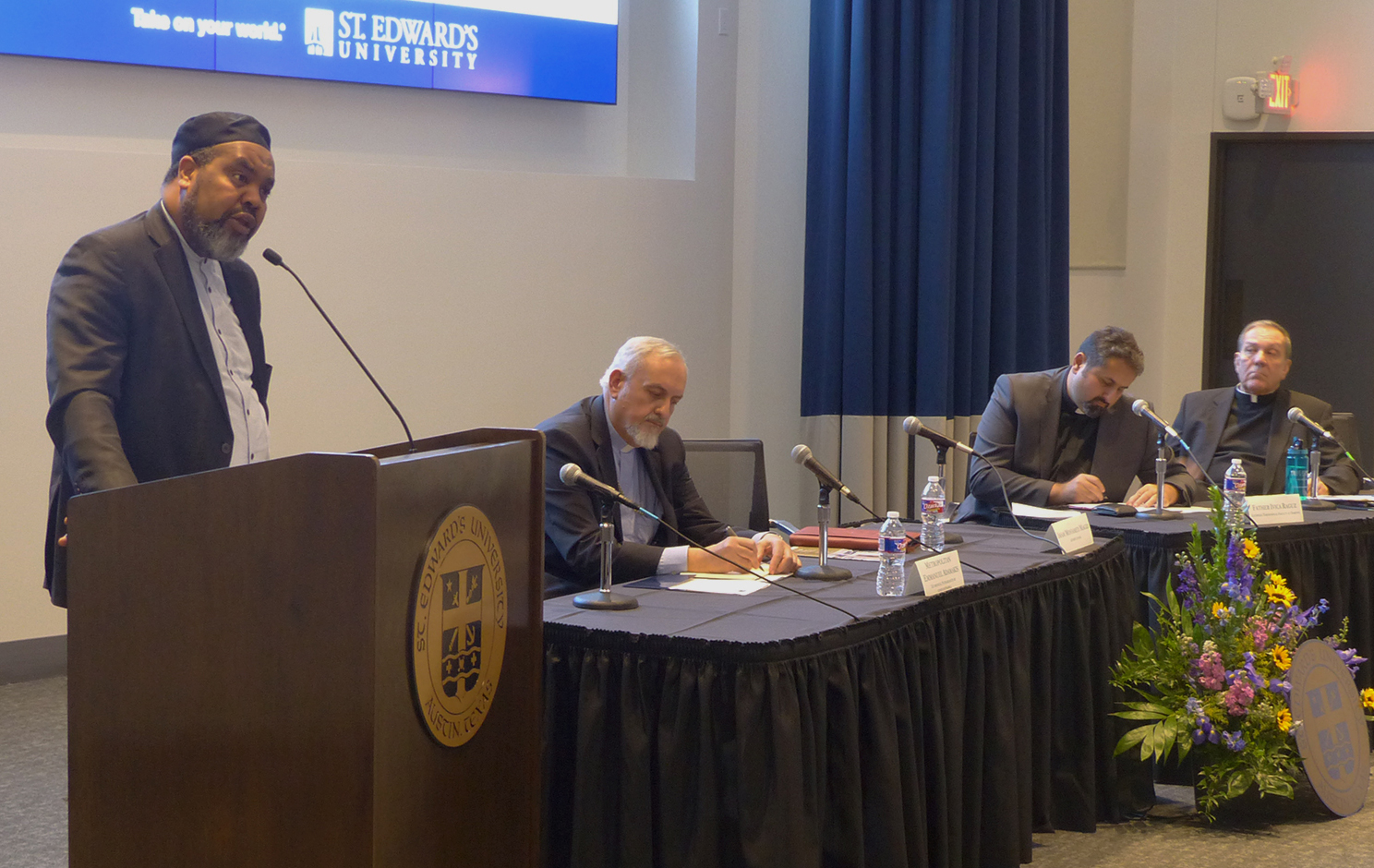 Actions that squander that sense of trust include “the negative ways governments have treated Muslim populations, which fosters skepticism and resistance to collaboration,” said Imam Mohamed Magid, executive Director of the All Dulles Area Muslim Society Center and a program chairman at Harvard University.

Tackling the Causes of Extremism 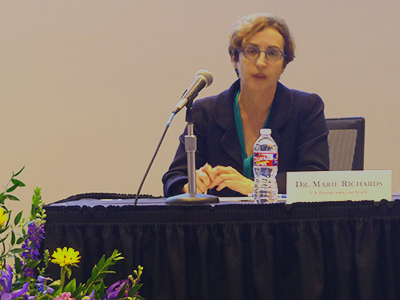 Marie Richards, Deputy Counterterrorism Coordinator for Regional and Multilateral Affairs with the U.S. Department of State offered a perspective on the U.S. government’s role in combating terrorism and violent extremism. Richards pointed to the importance the U.S. government assigns to amplify credible voices as a means for countering terrorism and extremism. “This means supporting women, youth and religious leaders who are trustworthy sources to expose violent extremism and provide positive alternatives,” she said.

Frances Flannery, professor of Religion at James Madison University and a Biblical scholar, addressed the nuclear threat of religious extremists. She focused on radical apocalypticism: a belief that the divine has sent the divine point of view to a small group of righteous extremists who believe that their violence will be vindicated. “Violence against extremists will only reinforce their belief that they are being oppressed,” said Flannery. “To stop extremism, we must address the underlying issues that make desperate people turn to extremism.”

Among those issues is a sense of powerlessness said Chantal de Jonge Oudraat, president of Women in International Security. She emphasized that not all fundamentalist or extremist religions are violent, but there is a correlation: “Fundamentalists and nonviolent extremist groups provide the music to which the violent extremists dance.” And with that dance comes the glorifying of hyper-masculine behavior, which suppresses women and encourages gender segregation. In order to support the Universal Declaration of Human Rights, “religious communities must work out where they stand on gender equality,” she said. 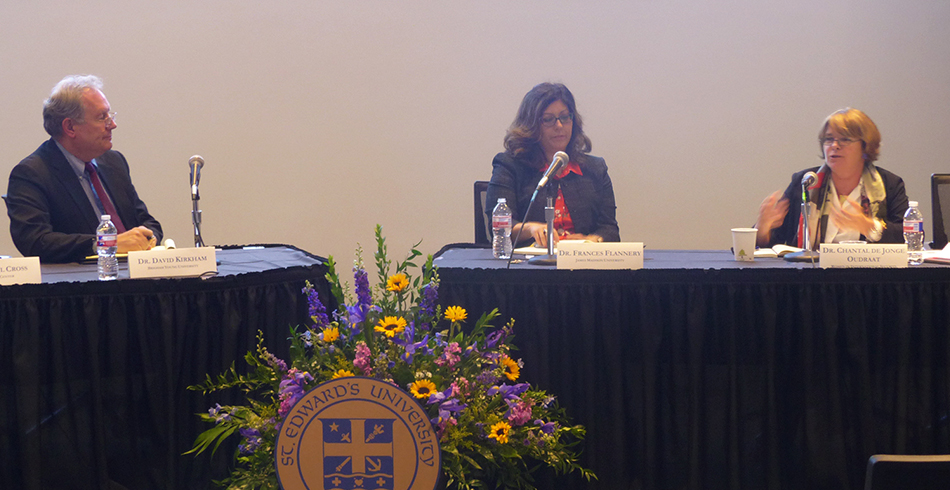 David Kirkham, academic director at Brigham Young University London Centre and an expert on ideological extremism, underscored the importance of conversations that involve a balance of security, religious and human rights communities. “Religious leaders and people of faith need to respect law, and others need to value what religion can contribute to society. Forces that emphasize one without the other are missing out,” he said.

Kirkham’s statement echoed a major point voiced by Cross during the opening session: “The implications of religious influence and identity in pursuing actions in the international community should not be underestimated.” 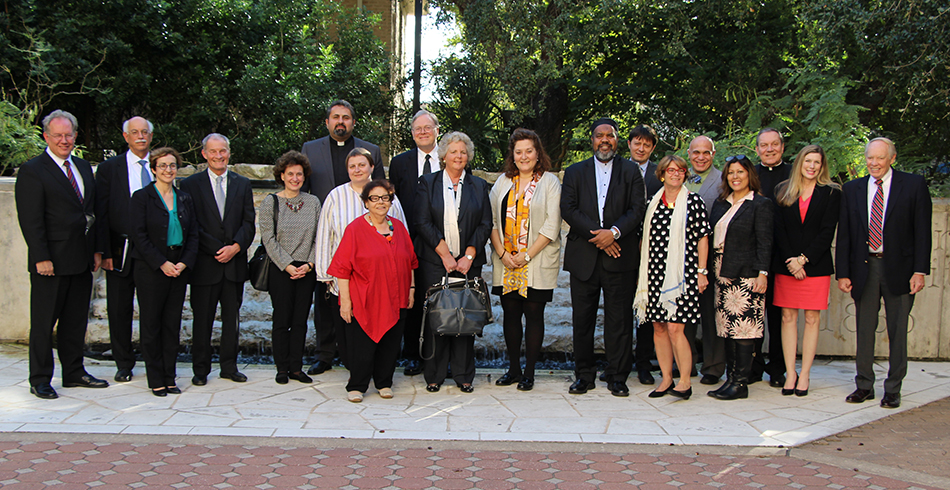 Cross noted that by all accounts, the organizers’ goals for the conference were achieved. “Attendees gained an even greater appreciation of the challenges and urgent need for engaging religious actors in collaborating toward world peace,” she said.

For Global Studies major Rebecca Aaron ’17, the Kozmetsky Center event was a much-appreciated opportunity to take part in a working conference that will contribute to international policy. “The Kozmetsky Center removes the distance between students and global experts,” she says. “Seeing and meeting the people involved in this conference made the issues more personal.”

Learn more about the Kozmetsky Center and the global learning opportunities it provides for students.

Lessons from a World Leader

Only At St. Edward’s