Cabaret is Reimagined on the Hilltop

What brings sultry singers, a can-can kickline, a set consisting (almost exclusively) of 20 chairs, and a girl in a gorilla suit to the Mary Moody Northen Theatre at St. Edward’s?

It’s the Department of Performing Arts Theater Arts program’s production of Cabaret, a musical that remains as relevant today as when it first appeared in 1966. 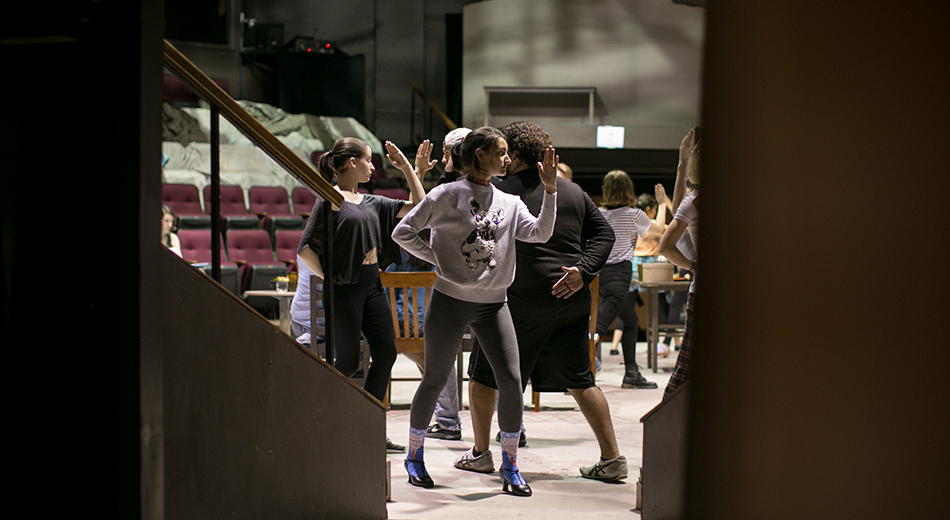 Cabaret is based on a play based on a book, later adapted into a movie. It has seen numerous revivals, each with a slightly different set of songs performed. (The MMNT production follows the song selection from the 1998 revival.) Despite the glittery spectacle of the namesake cabaret itself, the setting is dark: 1930s Berlin, during the rise of the Nazi party. It’s a high-energy classic, but it’s not an easy story — nor is it an easy production to stage. 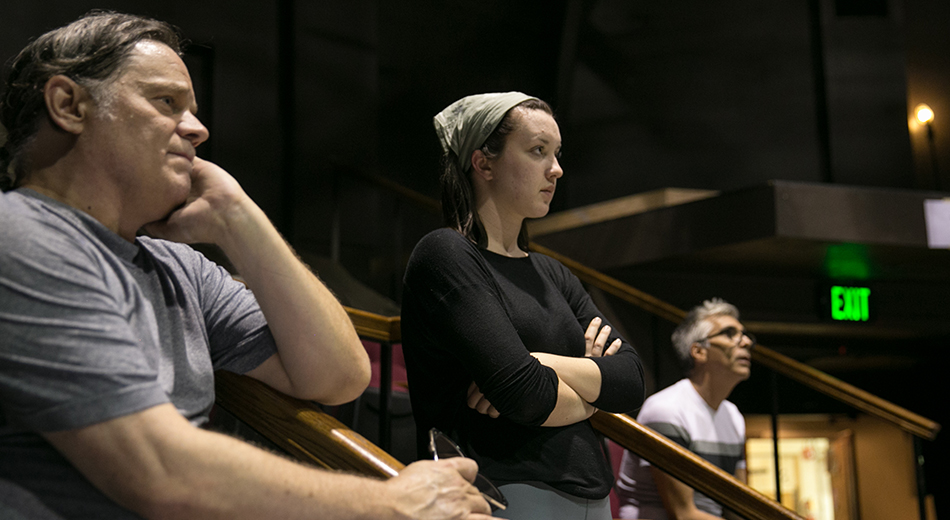 Behind the scenes, Hannah Wilson ’17 is hard at work as the production stage manager. She sits in on every rehearsal, taking notes on everything that happens — she knows where each set piece, costume and actor needs to be at any given moment. 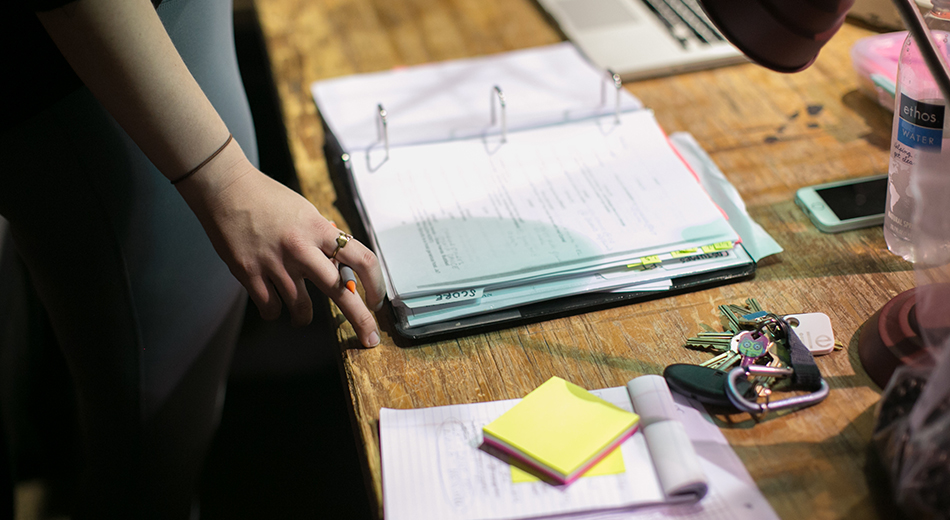 “I call every single light and sound cue,” she says. “For this show, even though the set is simple and minimalistic, we have a lot of things coming from the light grid. I have to give a lot of extra warning for those because it takes time to set everything up.” 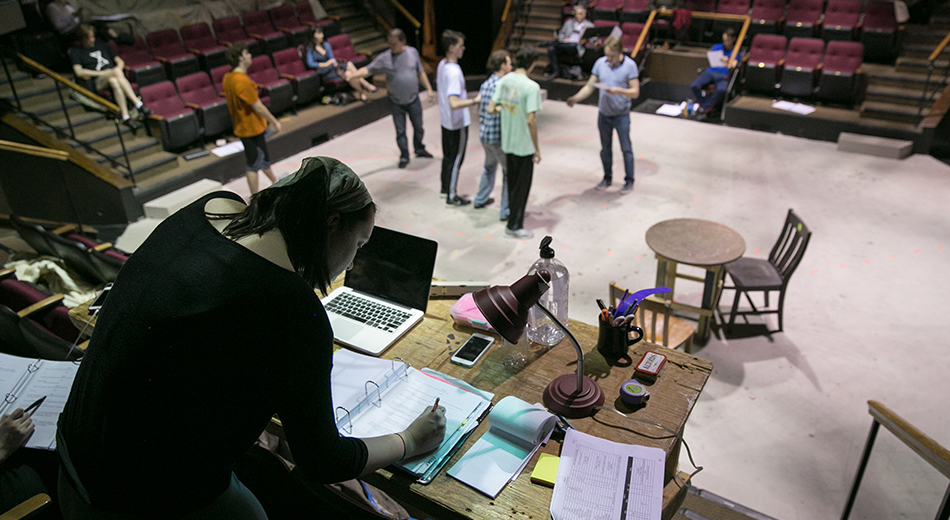 This amount of responsibility usually falls on the shoulders of a working professional, but Wilson has an impressive résumé for a student — she has served as assistant to the director with Austin Opera and
assistant stage manager with Ballet Austin — and she’s not alone. A team of five assistant stage managers helps her keep track of everything, each with their own focus area (costumes, props, etc.). 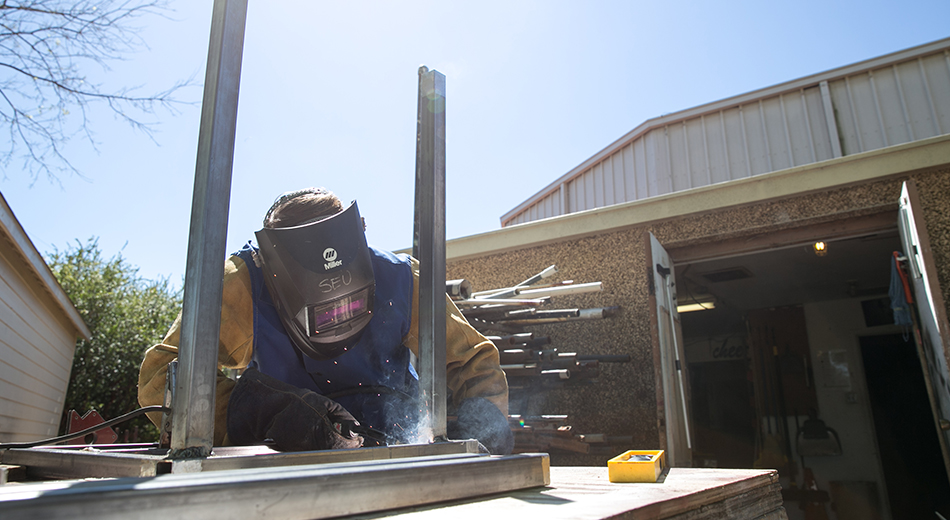 The actual construction of set pieces, costumes and props falls to other team members like Jacob Foster ’18. On previous productions, Foster worked in the costume shop and as a dresser (helping actors with costume changes), but he found his theatrical calling as a scenic artist. And there’s more to it than just the fun of welding and using an array of tools. 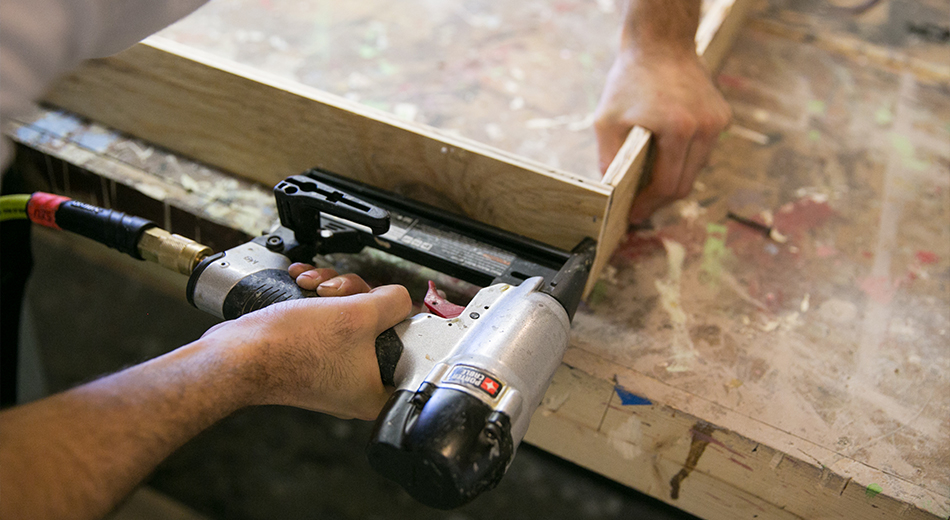 “For me, when I listen to a story, I try to think of images that can further that story and are correct with its meaning,” he says. “It’s so nice to sit back and look at something you’ve done when it’s on stage and people are living in it.” 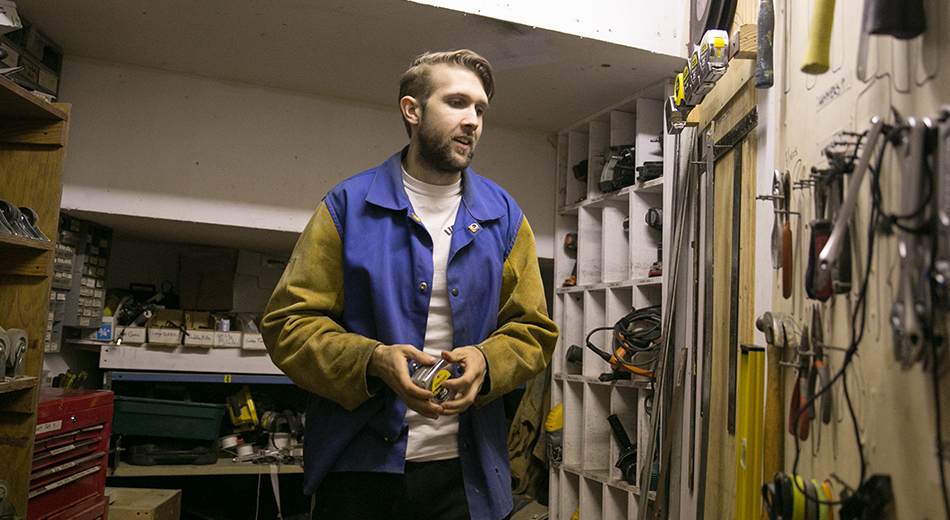 Because the chairs must withstand complicated dance numbers, Foster and his team had to reinforce them all. They'll need to look good and hold steady as they convey a train station, a fruit stand and the cabaret itself. 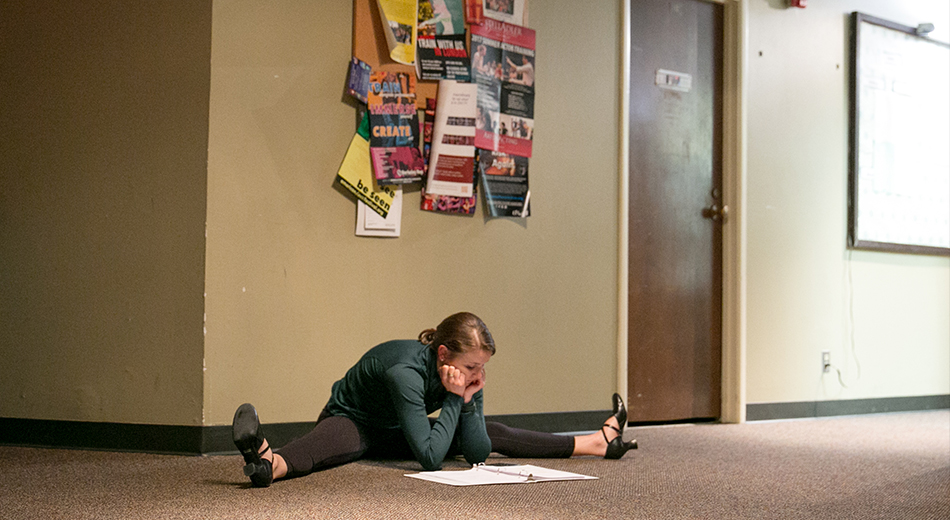 The acting side of things is no walk in the park, either. Every performer must sing and dance without the luxury of a proscenium stage’s back wall — because MMNT is a theater-in-the-round, each moment must be perfectly clear for audience members on all four sides. 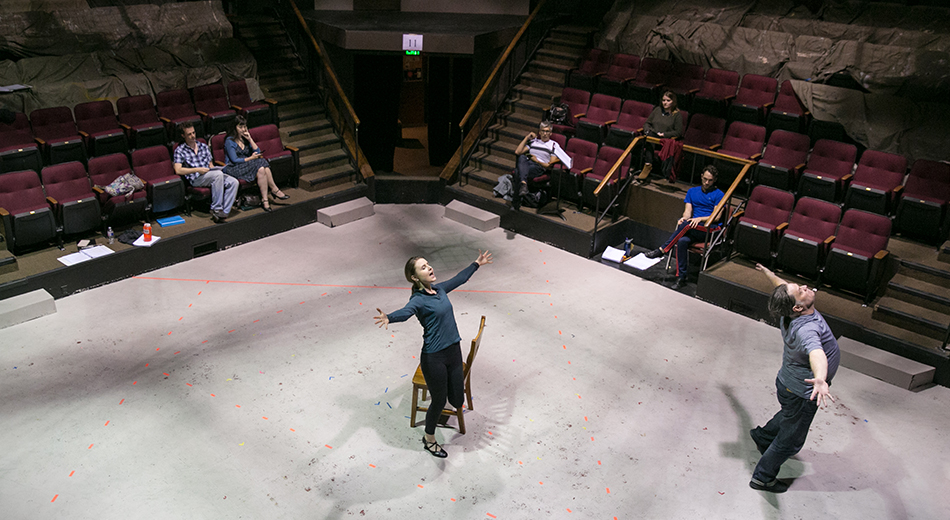 For Emily Ott ’17, the role of Sally Bowles adds another layer of complexity. Ott has always seen herself as more of a Maria from The Sound of Music — a far cry from the seductive, manipulative Sally. After struggling to find a connection, she came to understand Sally as someone making the most of a time with few opportunities for women. 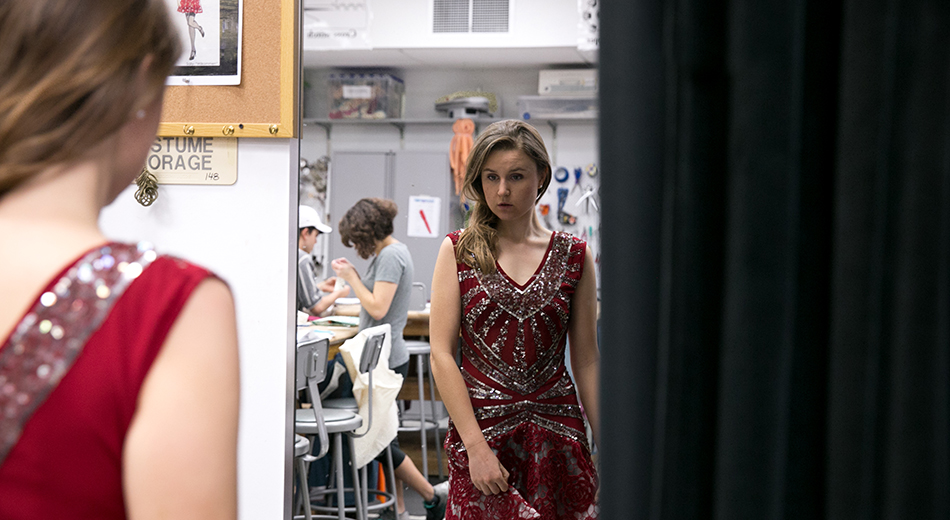 “In theater, it’s never about the words. It’s about how you say the words. There’s so much subtext,” Ott says. “Especially with Sally. She’s so manipulative because all she cares about is getting what she wants. It’s so far removed from me as Emily, but I can see why the decisions she makes are valid and justified in her head.”

For the cast and crew, every day is jam-packed — wake up early, work a part-time job, make it to class, finish homework, squeeze in a few meals on the go and rehearse for hours on end.

And is it worth it? Absolutely. 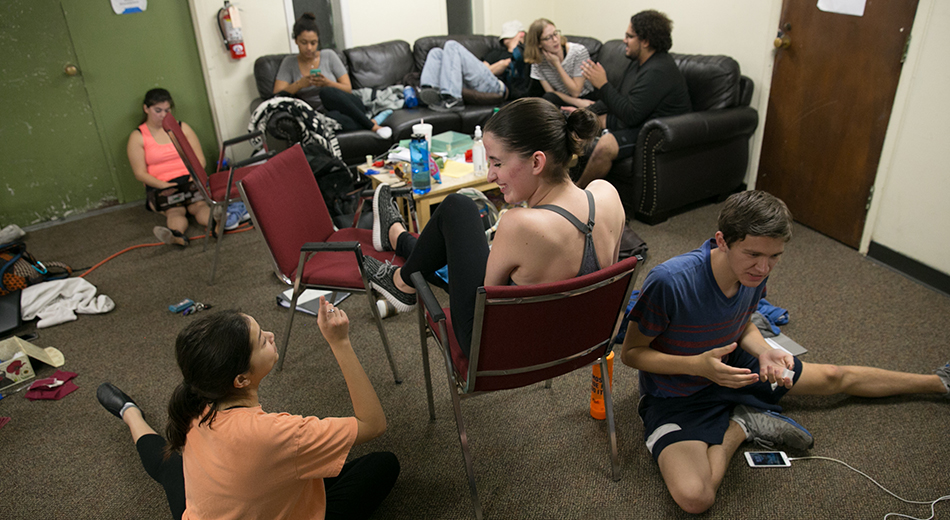 “Everyone who's involved, whether they're sewing or acting or managing, is there because they want to be a part of telling the story,” Wilson says. “I don't think any of us would be doing it if we didn't think that was an important thing.”

Want to see it yourself? Cabaret runs April 6–15, 2017. Purchase tickets and take a peek at next season’s productions at the Mary Moody Northen Theatre.

How to Draw Your Future

Voices of the Massacre Generation