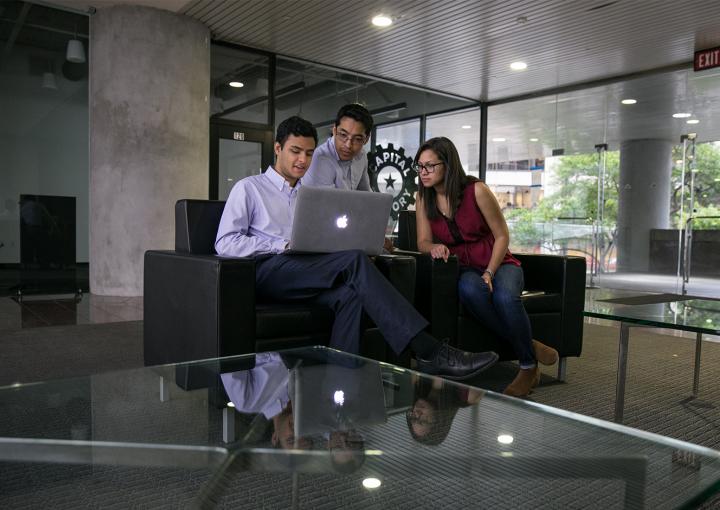 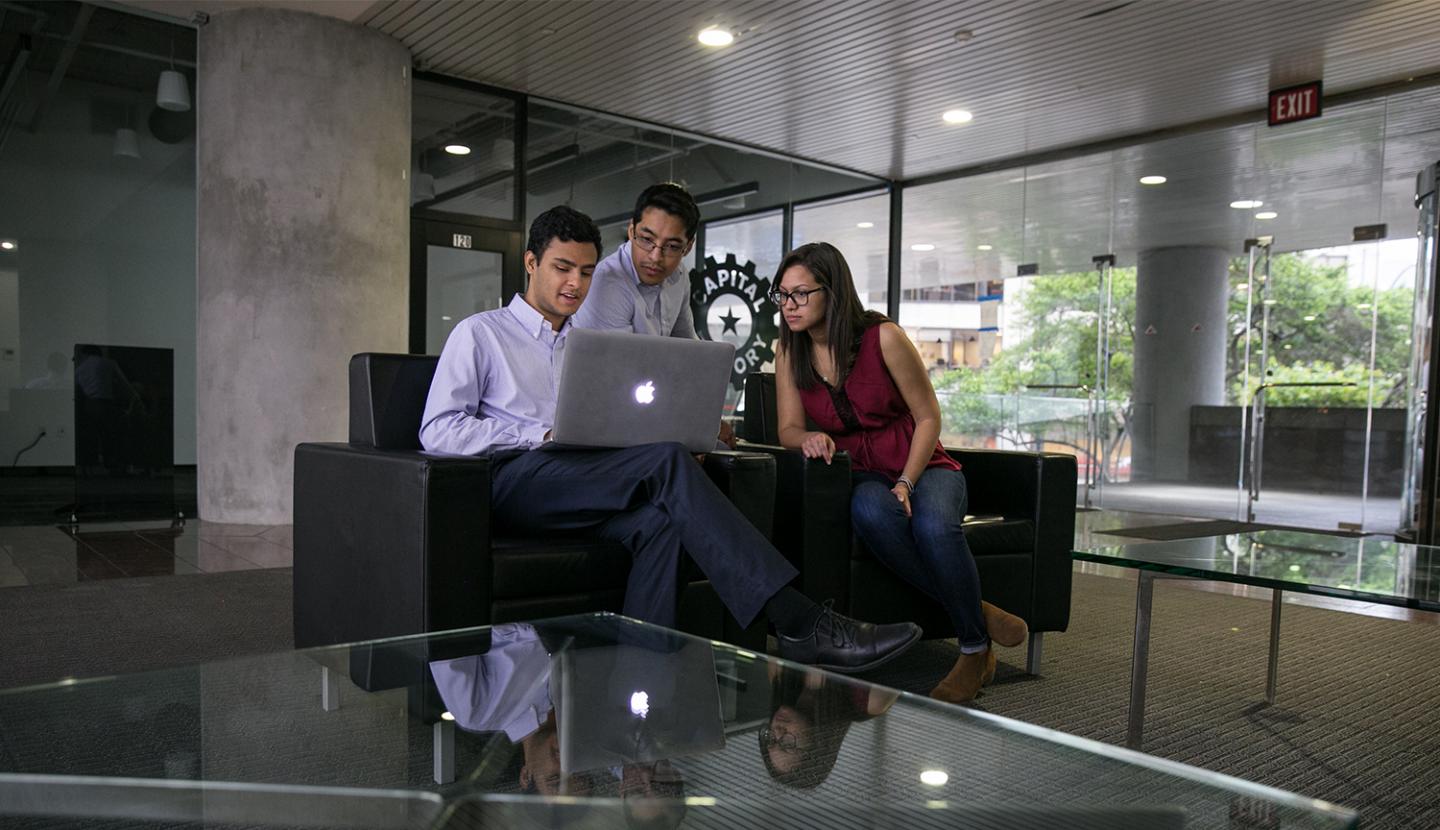 Mexico. China. Germany. Ethiopia. Brazil. The stories of immigrants who come to the United States start in countries on nearly every continent. Their reasons for fleeing their homelands are as diverse as they are — political persecution, poverty, drug violence, domestic abuse. But their goals are similar — safety, freedom, opportunity. And four students at St. Edward’s have teamed up to help. 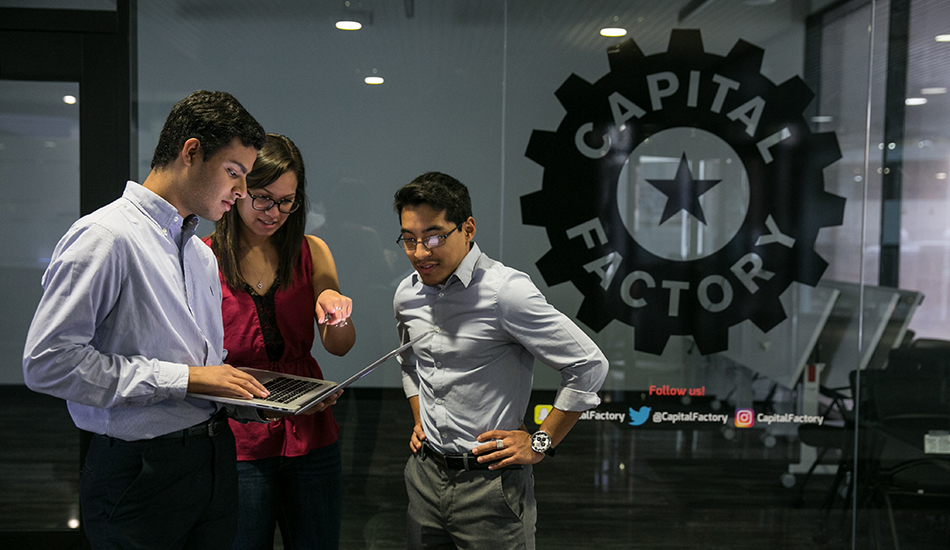 Carlos Alpuche ’18, Ricardo Apanco-Sarabia ’19, Gloria Perez ’17, and Joseph Ramirez ’19 are co-founders of YOUnite, a nonprofit that helps students understand their rights as immigrants. The idea began in July 2016 when Apanco-Sarabia, Alpuche, Perez, Ramirez and two other local college students were chosen for Austin’s first-ever LevelUp Institute. Over 12 weeks, two local entrepreneurs mentored the team of six as they created a start-up to help solve a social problem. 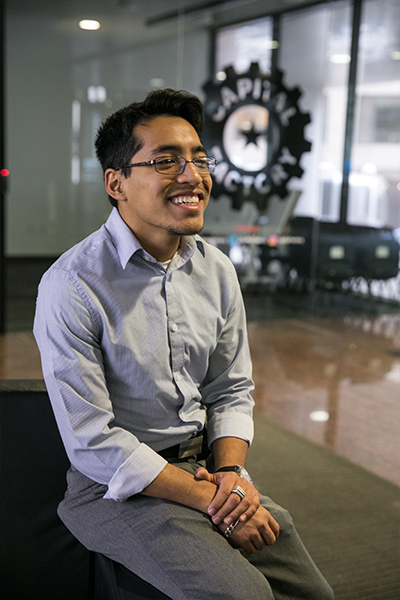 Initially, the group decided to create a web-based toolbox for immigrants looking to apply for DACA, the Deferred Action for Childhood Arrivals program. Created by former President Barack Obama in 2012, DACA protects immigrants from deportation, as long as they arrived in the United States before they turned 16, and allows them to work legally for two years. YOUnite hoped to make the formidable application process “approachable, accessible and easy,” says Apanco-Sarabia. “We wanted to create the TurboTax of DACA,” says Ramirez.

Then Donald Trump won the presidential election, and his promises to halt immigration and curtail services and benefits for immigrants quickly became national policy. As reported by the Austin American-Statesman, CNN and others, his administration began deporting undocumented immigrants, particularly in sanctuary cities like Austin. National advocacy groups like Immigration Equality began recommending that students not apply for DACA because it could bring unwanted attention to their undocumented status.

Soon after the election, YOUnite’s co-founders met in Perez’s apartment to regroup and strategize. They filmed a video and posted it to the group’s Facebook page. “I want to let you know we are all here for you,” Alpuche said in the video. “We need to show [this administration] that no matter what our political stance, we will stand together to find solutions.” 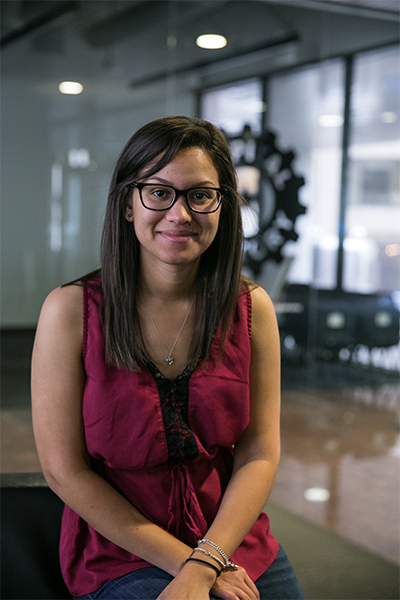 The four months they spent planning YOUnite before the election has helped them adapt their nonprofit model. Ramirez, a Biology major, has interviewed some of Austin’s top entrepreneurs and investors for advice. He has gotten access to those leaders thanks to his internship at Capital Factory, a hub for start-ups that St. Edward’s partners with to provide memberships for just 10 students each year. Accounting major Perez relied on experience from her own internships at Samsung Austin Semiconductor and Upland Software, and she met with the university’s financial aid office to get a better understanding of scholarship options for immigrant students. Alpuche paired knowledge from his Computer Science classes with internship experiences at HomeAway.com and Accenture. And Apanco-Sarabia, an Entrepreneurship major and member of the Delta Sigma Pi business fraternity, helped solidify the business plan.

The co-founders also held two garage sales to raise start-up funds. They finalized a mission and vision, drafted website copy and launched a Facebook page. And they pitched the plan for their social enterprise to potential investors through

the LevelUp Institute and at Breakthrough Austin, a program for low-income first-generation college students that all four have been part of since middle school. 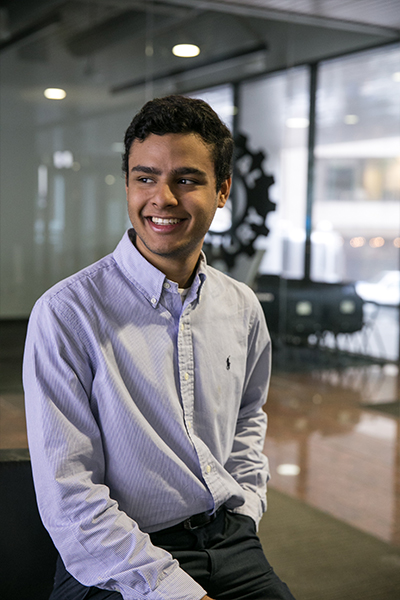 As they refocused YOUnite’s goals, they stepped in to fill one of the immigrant community’s immediate needs: understanding their rights when they face detainment and deportation. Ramirez, who has been involved with another local immigrant advocacy group since high school, has already given more than a dozen “Know Your Rights” presentations at Austin-area schools. He and the YOUnite team plan to broaden the presentation into a conference where immigrants and advocates can share resources and information.

“There are so many different kinds of people out there, and there are things that are unique to every immigrant’s story,” says Perez. “It’s important to recognize your roots and where you come from, but there’s also something unifying about the immigrant experience — there’s comfort knowing someone else faces the same challenges.”

Learning to appreciate different perspectives and work for social justice is a theme all four students know well — it's straight out of the St. Edward's University mission. Perez

drew on it when she volunteered for the Texas Human Rights Project, and Alpuche practices it daily as a Student Government Association senator. Apanco-Sarabia demonstrated at city hall as part of the Immigrants Make America Great Protest. Ramirez serves on President George E. Martin’s Advisory Council on Diversity and Inclusion and is helping plan next year’s Freshman Studies “Immigrant Stories” curriculum. For all four students, making sure “everyone has the possibility of going to college and ensuring that there is no discrimination,” as Ramirez says, is more important than ever.

“We’ll be here fighting,” says Alpuche. “We will stand united.”

Going Big on the Hilltop