See This Student’s #1 Tip for a Great College Experience 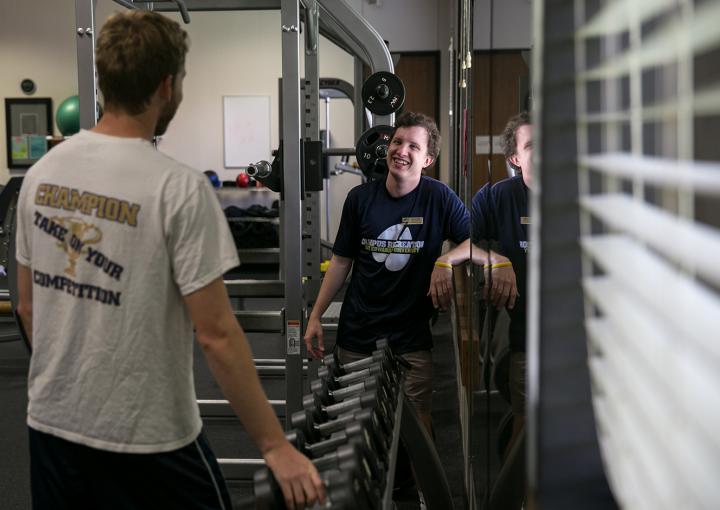 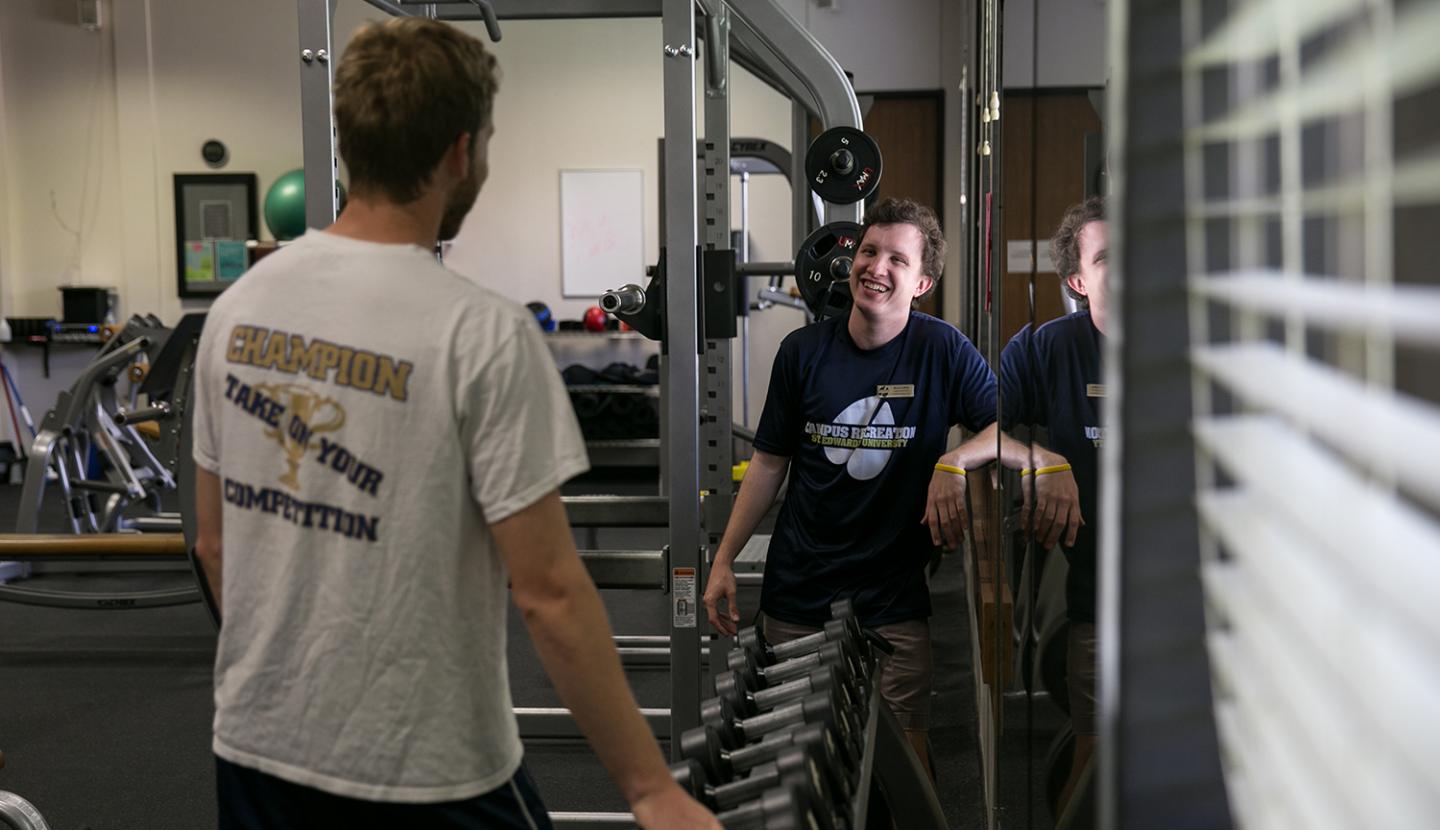 How much did Ben Griffith ’18, the university’s former student body president, pack into a day? Plenty. And we’ll show you. (Lots of photos and a video coming up.) A few summers ago, we tagged along with Griffith from dawn to dusk to document his daily routine. See where he took us and what he says is a must for having the best college experience. Don’t miss Griffith’s video at the end of this page.

It took Griffith transferring to St. Edward’s to figure out how to get the most out of his college experience.

During his second week of school, he attended an Involvement Fair and met Jonathan Edwards ’17, who suggested he apply for a vacant Student Government Association (SGA) senate seat. The next year, Griffith set his sights on the vice presidency.

“I knew I was still going to be involved on campus and that I could run again and be successful,” said Griffith. “I wanted to give back to the St. Edward’s community that has given me so much.”

The following year, during the spring of his junior year, Griffith ran to be student body president — and won. He says his experiences running a campaign taught him patience and how to be comfortable with being uncomfortable.

“If you don’t get involved, you’re not getting the full college experience,” Griffith said. “The university’s mission encourages us to take risks. It may be awkward the first couple of times, but it can turn into one of the best experiences of your life.”

The Communication major spent his summer telling incoming freshmen and transfer students how to get involved as part of the Campus Involvement Team during Orientation and about traditions and Hilltopper spirit as a Herd Leader during Anchors (a weekend full of activities before the fall semester for new freshmen). He also worked part-time on the Recreation and Wellness team, and at Snarf’s Sandwiches in South Austin.

“Coming here and being a part of different student organizations has helped me build skills as a person and a leader,” Griffith said. “I’m excited about the year ahead and can’t wait to see what happens next.” 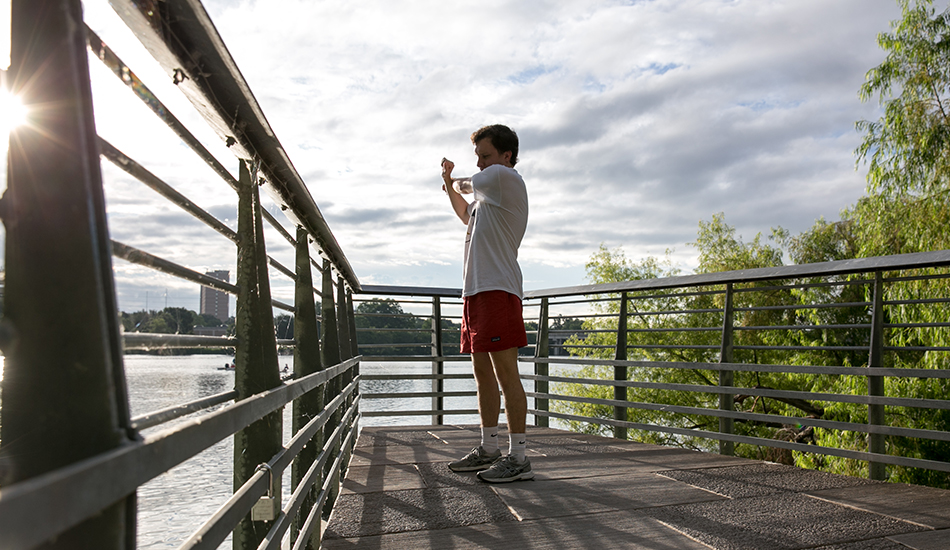 Griffith stretches his arms before starting his morning run at the Ann and Roy Butler Hike-and-Bike Trail and Boardwalk at Lady Bird Lake. 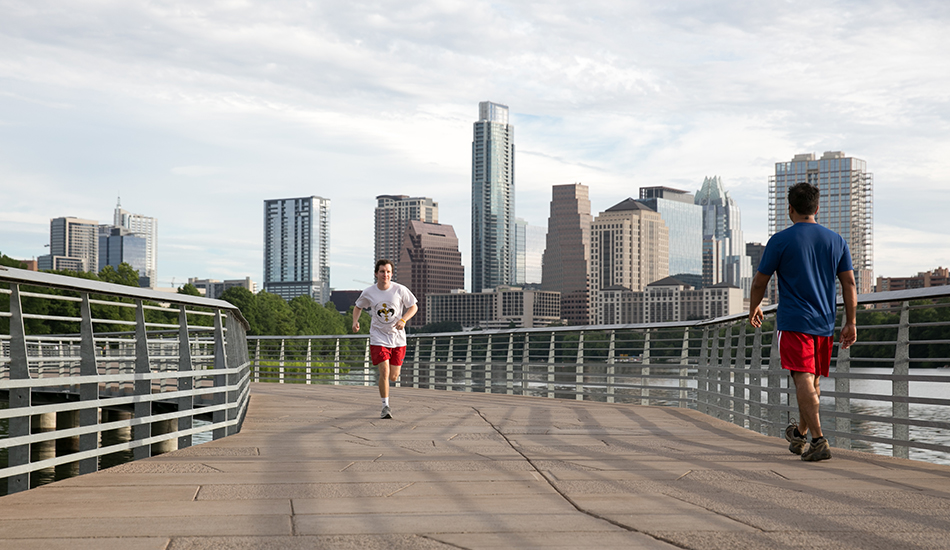 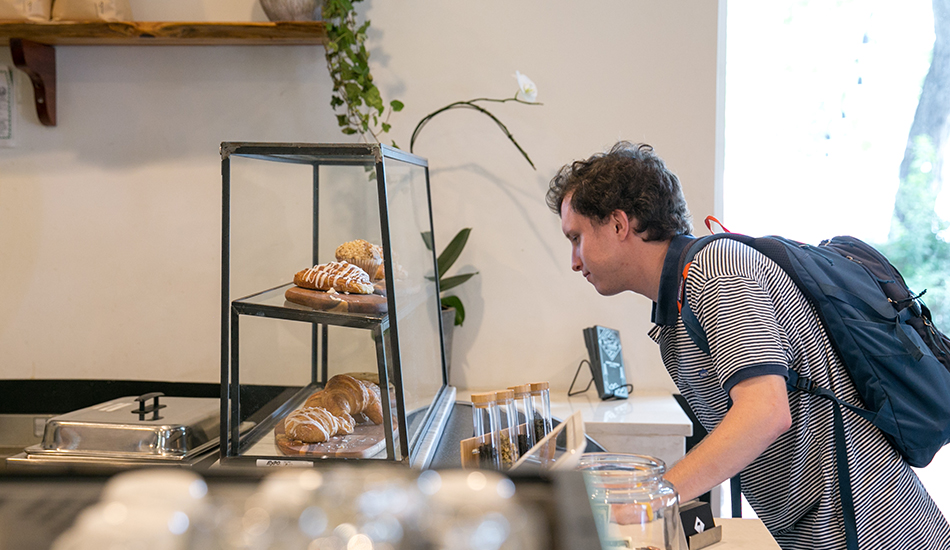 After his morning run, Griffith drops by one of his favorite coffee shops, Seventh Flag Coffee on South 1st Street. “They have a really good pastry selection,” he says. 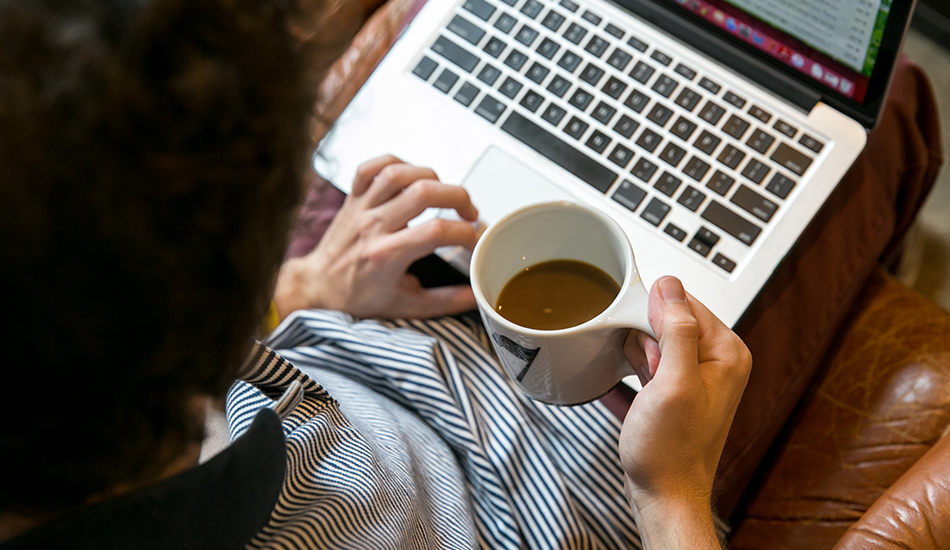 Griffith relaxes with a cup of java at Seventh Flag Coffee as he scrolls through his schedule for the day. 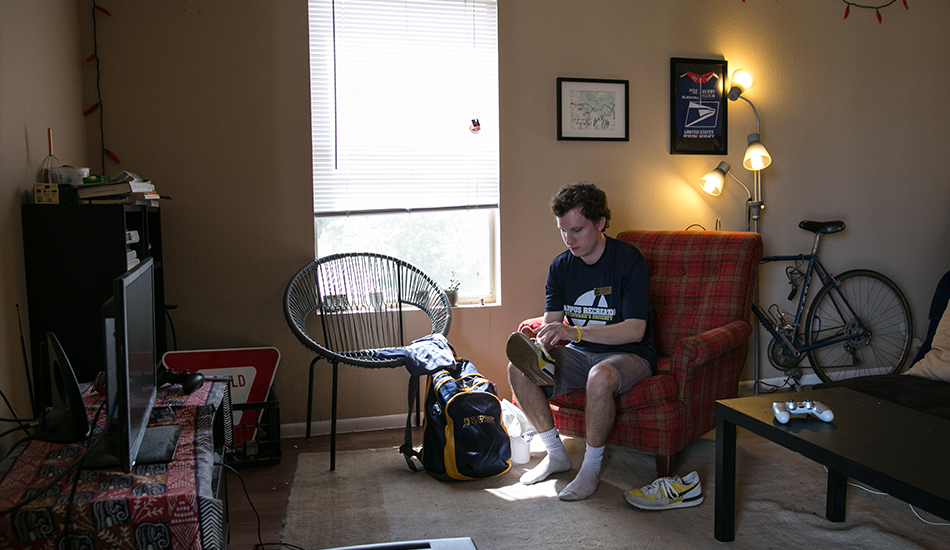 In the off-campus apartment he shared with his younger brother, Sam Griffith ’19, Griffith packs items he'll need for his Orientation and Campus Recreation and Wellness shifts. 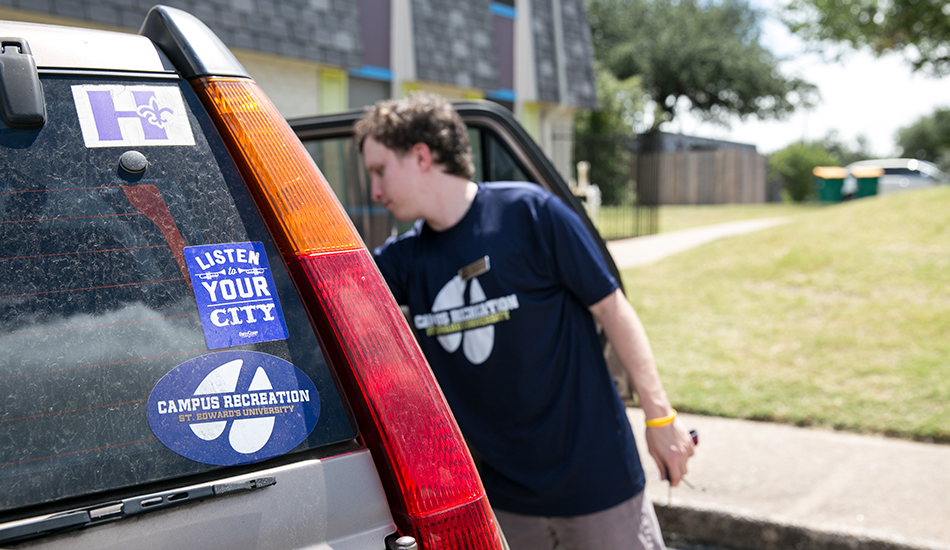 Griffith stows away his backpack before heading to campus to work at Recreation and Wellness and as a Campus Involvement Team leader at Orientation. 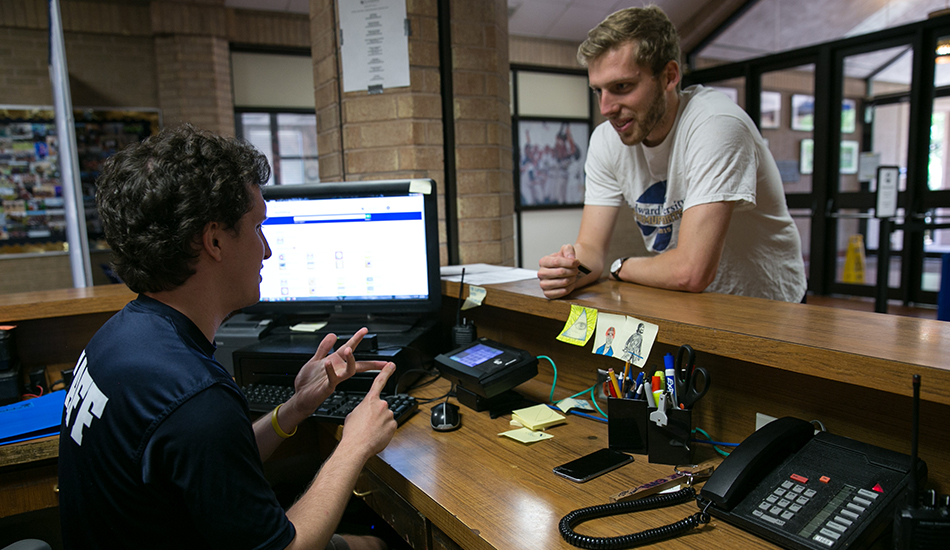 Griffith tells Henry Andrastek ’17 about amenities offered inside the Recreation and Athletics Center while working at the front desk during his Recreation and Wellness shift. 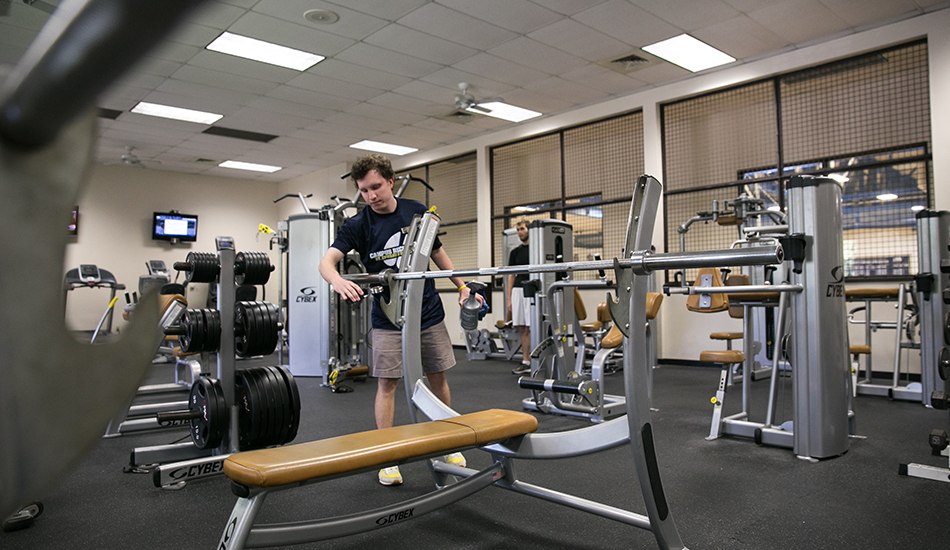 Part of Griffith’s duties while working at Recreation and Wellness include cleaning equipment inside the fitness center at the Recreation and Athletics Center. He’s was also part of their marketing street team. 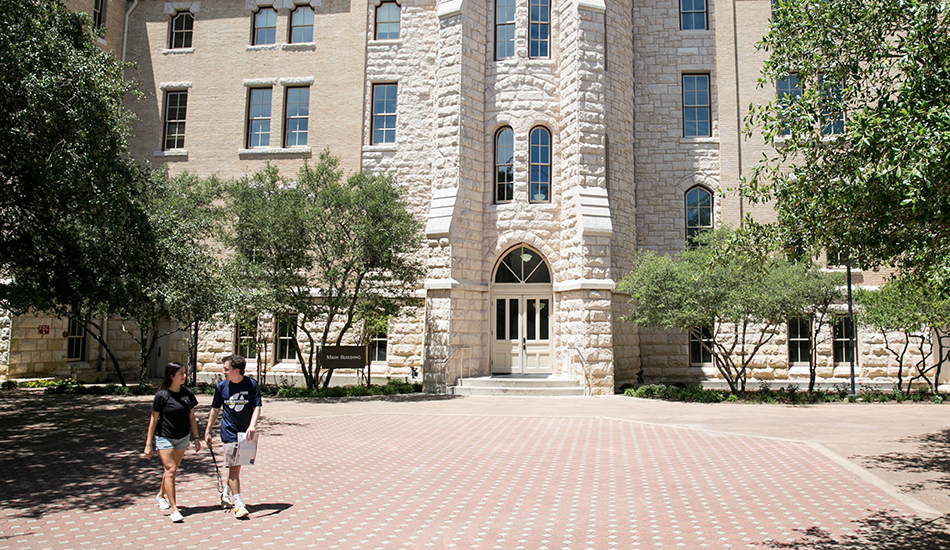 After checking the mail for Recreation and Wellness, Griffith and Sabrina Latigo ’18 chat as they stroll across Ragsdale Plaza. 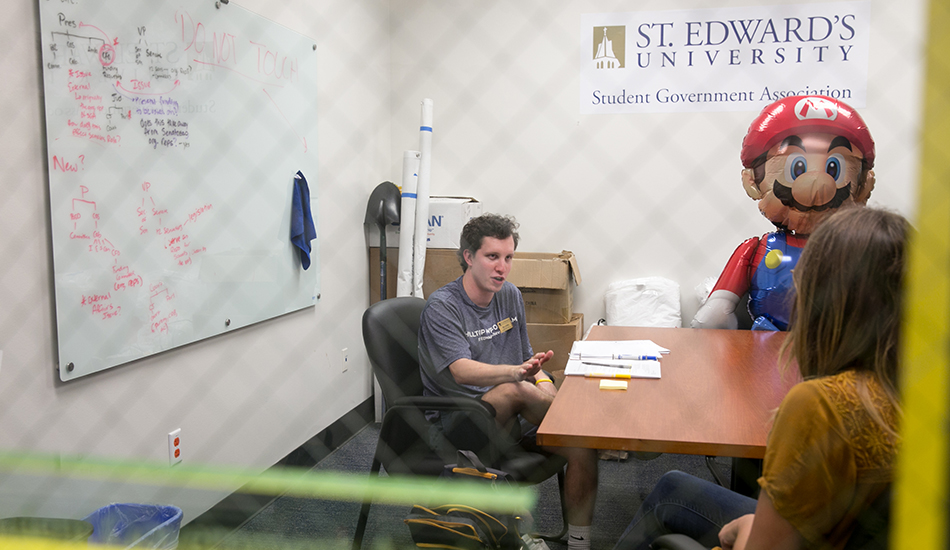 Griffith was the newly elected student body president in 2018. He and students in the Student Government Association met in their office inside Student Life to plan initiatives for the academic year. 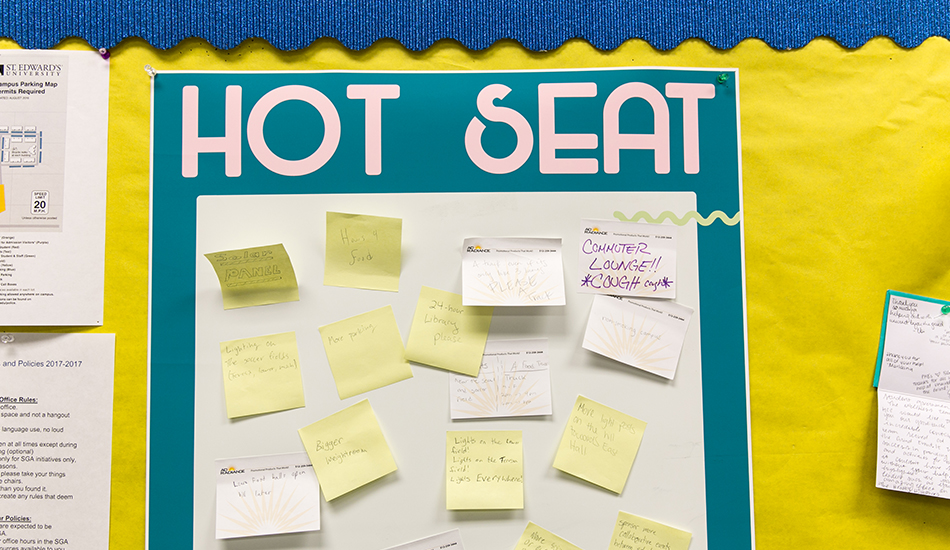 Suggestions from students for improvements on campus cover a section of a bulletin board inside the Student Government Association office. 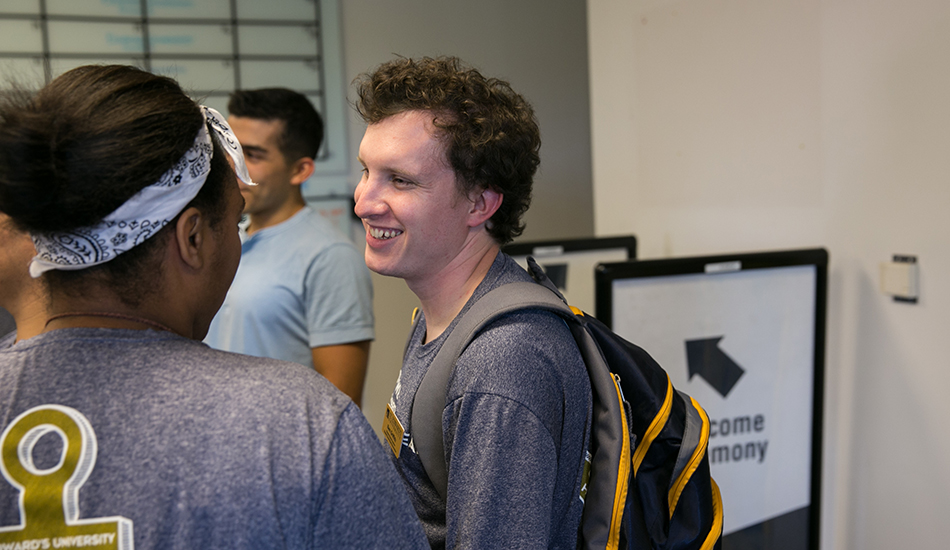 Griffith speaks with a fellow Campus Involvement Team leader inside the Student Life office before heading to Jones Auditorium to meet his group of freshman students. 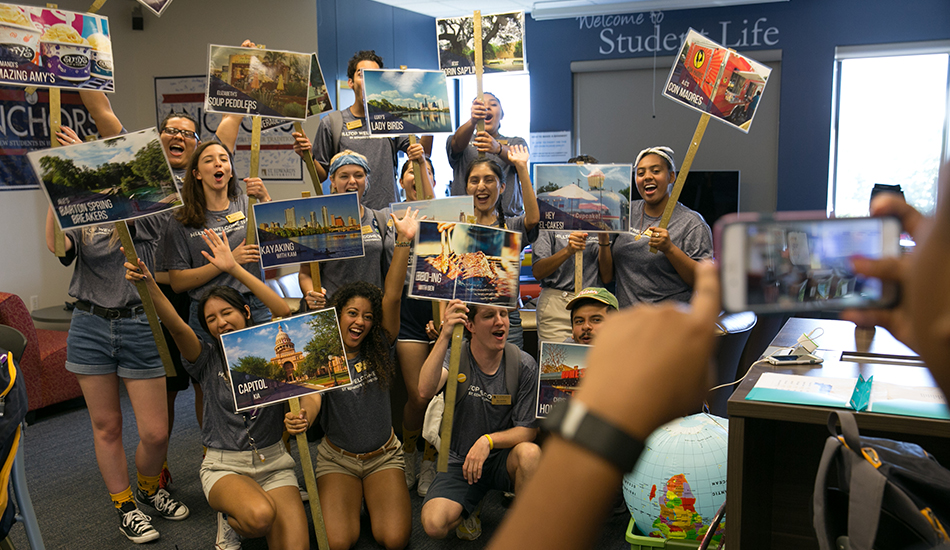 Campus Involvement Team leaders pose for a photo inside the Student Life office while showing off the Austin-themed posters they use during their welcome activities for incoming freshmen and transfer students.

Follow Griffith throughout his busy day in this video.

Holiday Joy Lights Up the Hilltop