6 Hilltop Seniors on the Move

See How Their St. Edward’s Experience Is Taking Them Places 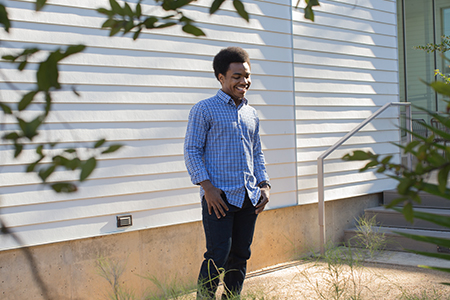 Why he’s a student to watch: With two internships at accounting giant KPMG on his résumé and a third in the works, Singleton flew to Hollywood last summer as one of only 60 students selected for the company’s Future Diversity Leaders Conference. “KPMG believes that the only way to be the best firm is to hire the best people from all backgrounds and cultures. I know I can truly be myself there,” he says. “That’s exactly how I feel at St. Edward’s, too.”

What he’s doing: He is finishing up a BBA and will

return to the hilltop in the fall for one more year to complete a master’s in Accounting through the university’s five-year BBA/MACT dual-degree program. He is also part of the Accounting Club and the National Association of Black Accountants.

Beyond the numbers: Singleton has cleaned up a local park, tended a community garden and repaired houses for the elderly as a volunteer and team leader in Campus Ministry’s S.E.R.V.E. 1 Day program. As part of a Service Break Experience trip, he spent a week helping the poor and homeless at nonprofits in Denver, Colorado. “My trip showed me that sometimes people just want you to listen to their story and show them you care,” he says. “They want to spend time with someone who recognizes that they are human beings.”

Why she is a student to watch: Baker is trilingual — she speaks English, Hungarian and Spanish. In 2016, she taught English to children in Romania with funding from a Summer Academic Excellence Award from St. Edward’s. Last summer, she studied in Chile through a Benjamin A. Gilman International Scholarship from the U.S. Department of State.

On poverty and social justice: Universidad Adolfo Ibáñez, where Baker studied, is one of the most prestigious and affluent in Chile. But just a couple of 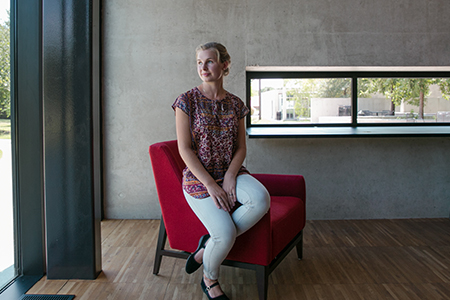 miles away is “a completely different reality,” she says, where people live in illegal shantytowns without access to schools or hospitals. “Seeing the disparity has made me ready to work harder than ever to advocate for social change.” 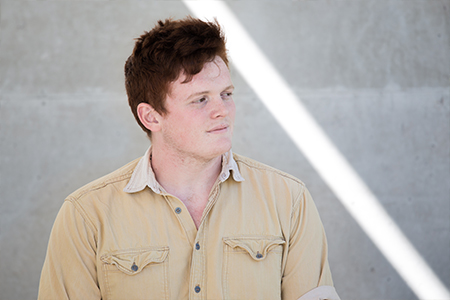 Why he’s a student to watch: Espenan has played on the club rugby team since his freshman year (and captained the team his sophomore year). He has welcomed prospective students as part of Hilltop Hospitality and is a student orientation coordinator. He completed a marketing internship with Emmis Communications and worked as media director for the Laity Lodge Family Camp. Now, he is a videographer for the Hilltop Views student newspaper.

On choosing a major: As a freshman, Espenan had no

idea what to major in before he walked into his Introduction to Communication class with Associate Professor Teri Varner. “She explained how with a comm degree you can do just about anything,” he says. “You learn adaptable skills like problem-solving, thinking about things from different angles, and writing and speaking, so you can adapt to any situation.”

How she’s shaping future generations: Uzcátegui worked with students in an after-school program at St. Elmo Elementary School in Austin to use technology to create personal histories. She says that the project helped her understand her role as an educator. “One of the biggest lessons I learned is that students need more interactive learning and hands-on activities rather than just sitting down and listening,” she says. As a future teacher, Uzcátegui plans to integrate songs and movement into her own classroom one day. 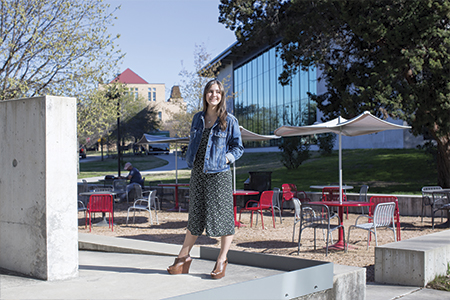 Her story: Uzcátegui created her own personal history to share with the second-graders at St. Elmo: Highlights included her theatrical debut in a preschool play, the day she moved to the United States from Venezuela, the moment she got a puppy, and the discovery of a big envelope in her mailbox from her dream university. “The day I learned about my acceptance to St. Edward’s was one of the happiest days ever.”

What’s next: Uzcátegui spent the spring semester completing her student teaching at Zavala Elementary School in Austin and is applying for preschool, bilingual and life-skills teaching jobs. Eventually, she wants to earn a master’s degree and focus on children with autism spectrum disorder. 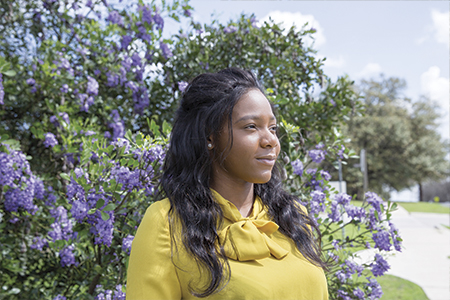 How science and math collide: Akomezogho completed an internship with Assistant Professor of Physics Paul Walter, during which she calculated the weight and drag flow of weather balloon–launching equipment. The weather balloons are used to collect critical meteorological data during major storm systems. Akomezogho’s role helped ensure that the scientists were working with clean data — and getting accurate results.

What’s next: The international student from Gabon,

Africa, is applying to positions at actuarial firms, where she can put her math skills to use, as well as considering a path as a math teacher.

How he set himself up for success: When Fragapane graduates, he’ll have interned with Vida Capital (a hedge fund in Westlake), big-four accounting firm KPMG and the Austin tech company OpenStack. He spent a summer studying abroad in Japan, Malaysia and Thailand and traveled to Australia for his OpenStack internship. On the hilltop, he played club lacrosse, was in the Accounting Club and was part of the Honors Program.

The hilltop network: Fragapane was introduced to 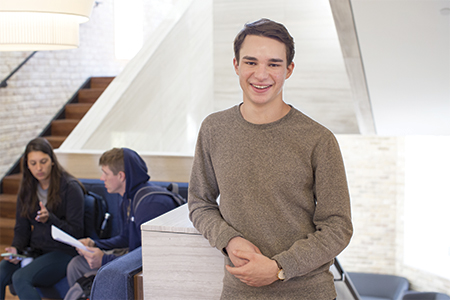 KPMG senior associate Alex Patterson ’14 by Professor of Accounting Louise Single. Patterson had played club lacrosse at St. Edward’s, too, and the pair quickly became friends. “We had mutual experiences and friends to bond over, which is what makes a small school like St. Edward’s so special,” he says. “Alex got me my first interview, helped me go the extra mile and pitched to the partners that I should be offered a full-time position.”

What’s next: That full-time position came through: Fragapane is moving to Houston after graduation to start as an IT Advisory associate at KPMG. He is also a candidate for the Certified Public Accountant exam and plans to finish his certification before the end of the year.

Career Mentorship on the Hilltop