Where Can a Degree from St. Edward’s Take You? Anywhere. 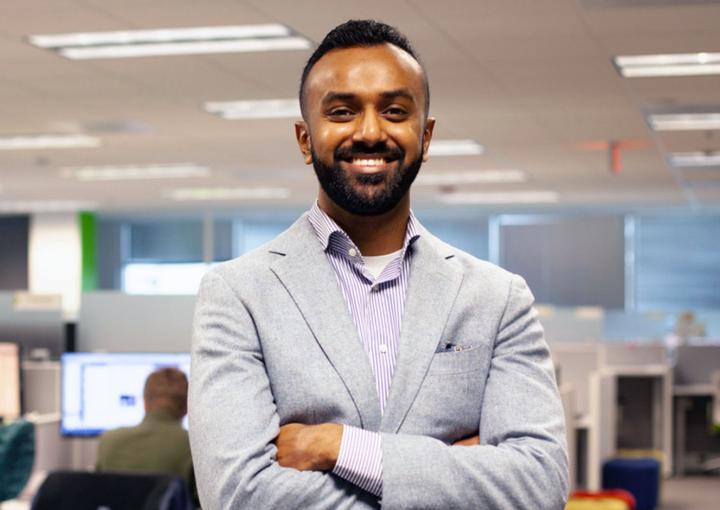 St. Edward’s University counts more than 25,000 alumni around the globe. Among them are teachers, artists, entrepreneurs, elected officials, scientists and advocates for justice. Some are making their mark in the job they started right after graduation. Others have excelled in multiple careers. Still others are gaining recognition for a passion project they started that took on a life of its own. They’re all building on the education they received at St. Edward’s — and the university’s encouragement to pursue their own dream, even one that might seem impossible at first.

Leslie Ward ’01 was named state president for AT&T in Texas, a position in which she works closely with community and business leaders and elected officials to advance the company’s services in the state.

Jessica Martinsen ’18 is the client relations officer for KikuPal, an online platform that lets people fund services for a friend — like house cleaning, meal delivery and Lyft rides — during life events, especially death.

Jay Kuruvilla DMBA ’15 (shown at the top of this page) is a senior UX designer at ResMan, a rapidly growing property management software company based in Dallas. Kuruvilla’s role includes establishing the overall standards and education on UX for the company and building their UX discipline.

After completing the highly selective Goldman Sachs internship, Alicia Jude Olivier ’17 accepted a full-time position as a financial analyst at the multinational firm.

Giovanni Reyes ’12 is the supervisor of ad operations at the Austin American-Statesman daily newspaper.

Justin Murrill ’02, MSOLE ’08 is the head of corporate responsibility at AMD in Austin, a position that includes leading the company’s sustainability efforts.

Dominick Namis ’17 is a partner manager at Facebook’s Austin office, where he helps ad agencies that specialize in healthcare, ecommerce, technology and other fields understand Facebook’s opportunities for their clients. 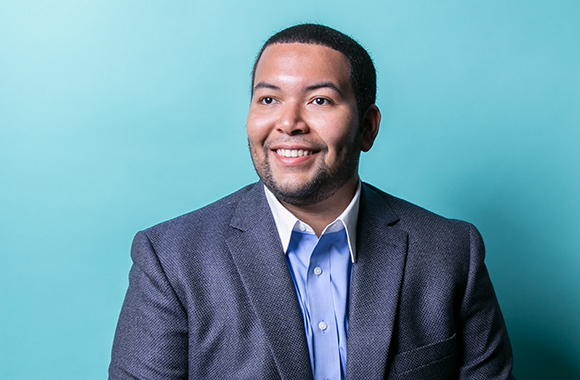 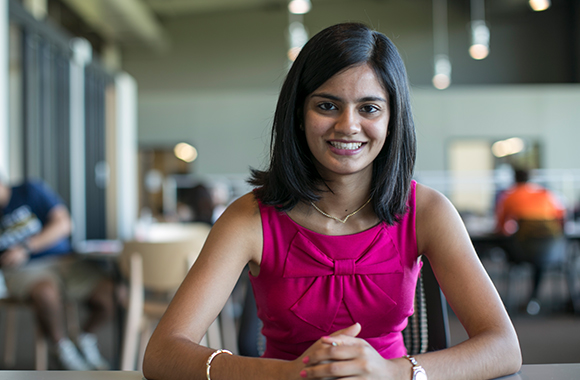 Jana Soares ’15 was featured among the “Best and Brightest MBAs from the Class of 2018” by Poets & Quants, a website that covers graduate business education, and now works as an Associate Product Marketing Manager (APMM) at Google.

Adriana Talancon ’18 is the head of the marketing department at America Trade Corp. in Monterrey, Mexico.

Applying her St. Edward’s education in Graphic Design and her master’s in Educational Technology, Alison Koen ’03 is Amazon’s Learning Continuity program manager for their Global Security Operations department based in Seattle. 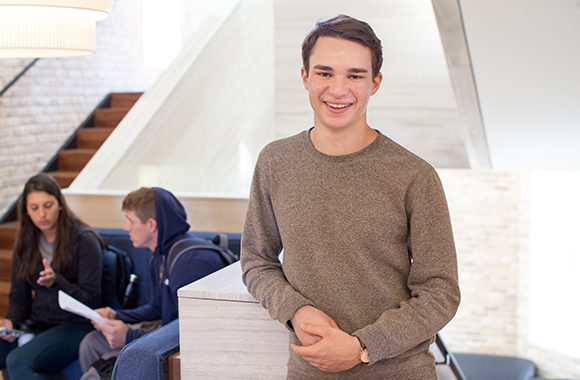 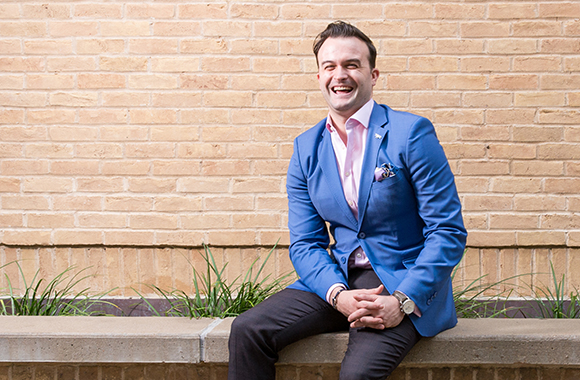 After interning at software company VMware, Sophie Gairo ’17 and Jason Morris ’18 were offered full-time positions there as software engineers. Adrian Leonard ’18 interned in software development at CDK Global and was hired as a software engineer at the conclusion of his internship.

Shelby Cole ’13, an English Writing and Rhetoric major, is associate director of Authentic Campaigns, a Washington, D.C., firm that builds online political campaigns. She is currently working on the 2020 presidential campaign for Kamala Harris, U.S. Senator for California.

As the director of digital marketing for Messina Touring Group (MTG), Jake Nishimura, MBA ’15, is in charge of the digital strategy for the tours of all MTG artists, which include Taylor Swift, Ed Sheeran, Shawn Mendes, George Strait, Kenny Chesney, Eric Church and Blake Shelton.

Andrea Ojeda ’17 won a Fulbright English Teaching Assistantship to Brazil and was one of sixteen finalists for the Rhodes Scholarship in the Texas/Oklahoma region. 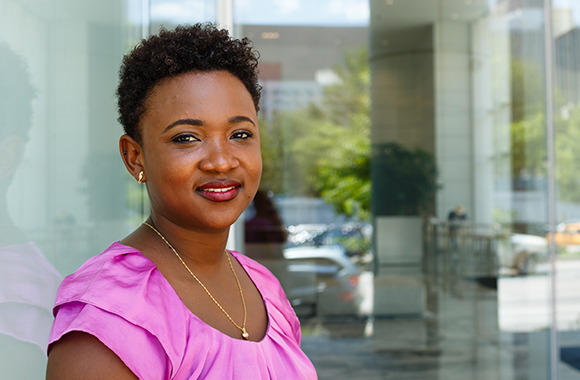 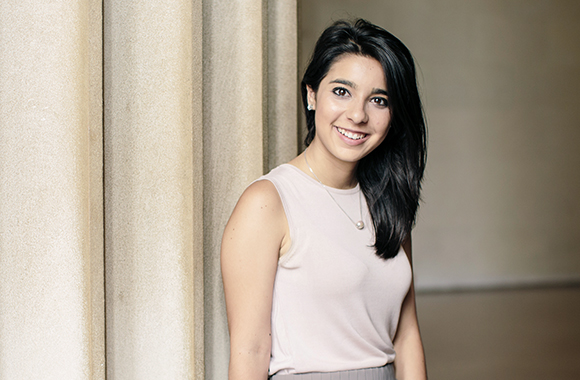 While attending the University of Pennsylvania Law School on a full scholarship, Victoria Ochoa ’15 has written two opinion pieces about the border and immigration in the past year: one for the Texas Tribune and one for the Washington Post.

In addition to being a second-year medical student at the University of North Texas Health Science Center, Texas College of Osteopathic Medicine, Katelyn Tate ’17 co-chaired the 6th Annual Out for Health Conference in February. The statewide conference is dedicated to educating current and future health professionals about the health climate within the LGBTQ community and how to best cater care toward their LGBTQ patients.

After earning her doctorate in Developmental and Psychological Sciences at Stanford University, Victoria Rodriguez ’11 is now a postdoctoral fellow at the University of San Diego. Drawing on the lessons she learned as a first-generation college student, she mentors other first-gen and underrepresented students at USD.

Jenn Hassin ’12, an artist whose work often employs rolled paper or cloth as a medium, is attending the Columbia University School of Arts MFA program in Visual Arts, her first-choice graduate program. Her work has been shown in numerous galleries; she has also performed in The Telling Project, in which veterans share their experiences of military service. 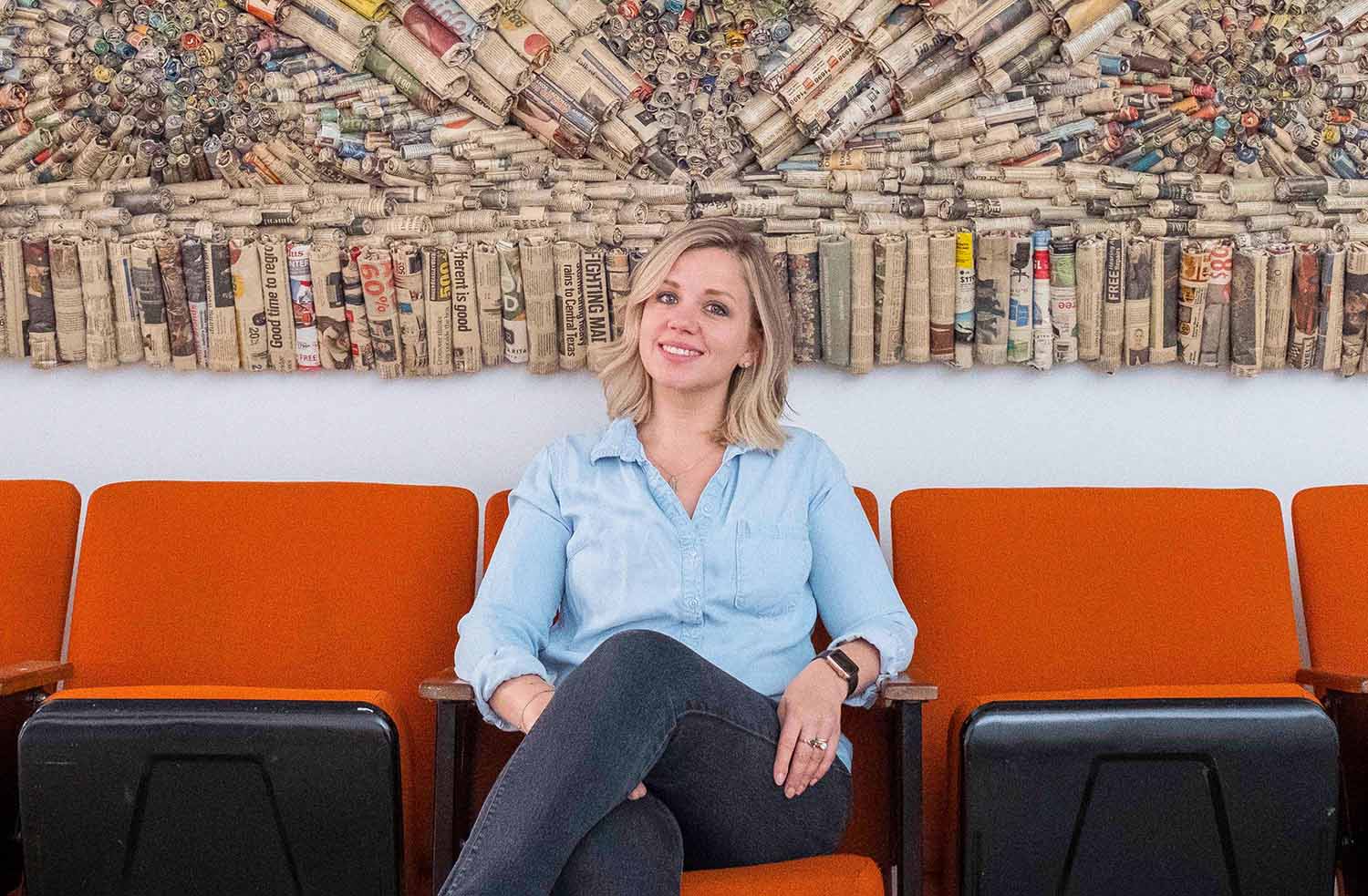 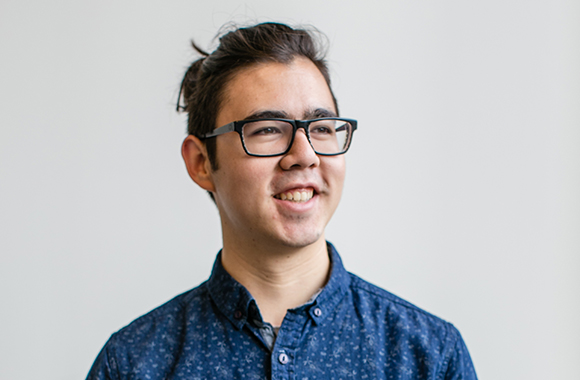 Christopher Tonnu Jackson ’16 is working toward his PhD in Chemistry at the University of California Berkeley. While at St. Edward’s, he conducted research at the Department of Energy’s Stanford Linear Accelerator Center and at NASA, and he served as a student representative at the 2015 Paris Climate talks.

After earning his PhD in Biology at the University of Illinois at Chicago, Leon Venegas ’10 is an associate scientist at MedImmune, which conducts research and development for pharmaceutical company AstraZeneca.

After completing a master’s in Accounting at The Ohio State University — where he was chosen by the Ohio Society of CPAs to serve as director of the Accounting Careers Awareness Program for underrepresented students, a leadership position that came with more than $25,000 in scholarship money — Arnold Gonzalez ’18 accepted an offer of employment from Deloitte.

Matt Wolski ’13 and Max Kunik ’13, who have been friends since their freshman year at St. Edward’s, founded Taster’s Table Club. The company organizes monthly dinner experiences at Austin’s buzziest restaurants, where members get a 6+ course meal with dishes from the daily menu at affordable prices. The club expanded this year to Houston, Portland and the Cleveland-Akron area.

This year’s Forbes “30 Under 30: Manufacturing & Industry” list includes Regina Vatterott ’16, the COO of EllieGrid. The company — which Vatterott and her team launched in 2015 — makes a smart pillbox that reminds users when to take their medications and how many to take. 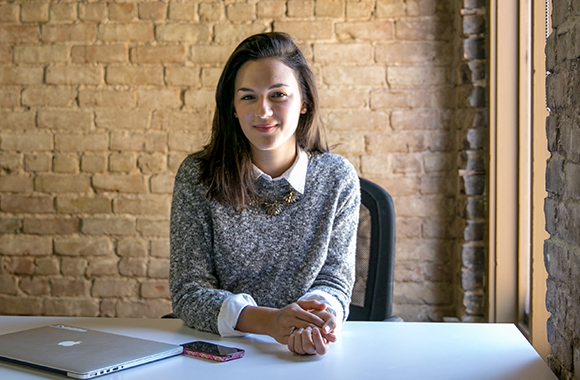 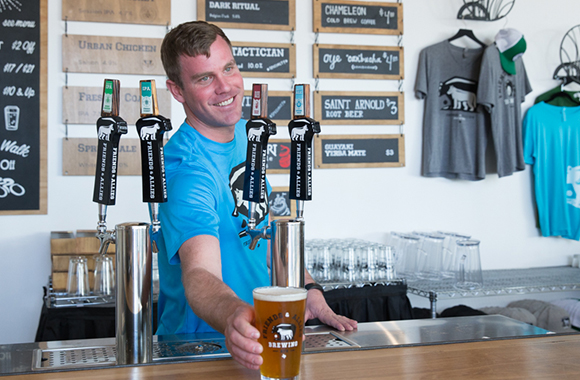 A toast to Ben Sabin ’09, cofounder of Friends & Allies Brewing in Austin, which released the Hilltopper Bock — a seasonal brew that Sabin calls “a tip of the hat to the school that I went to” and its mountain goat mascot. “Bock” is the German word for male goat.

Christina Stoitchkov ’16, MSLC ’18 and her husband just launched Austin Padel Tennis, an indoor space for the racquet sport that originated in Latin America and has over 10 million players worldwide.

Lady Gaga and Michelle Obama are among the celebrities who’ve worn gowns designed by Brandon Maxwell ’08. After spending a month in Marfa last spring creating his Texas-inspired Spring/Summer 2019 collection, he worked with Kia, one of his corporate partners, to facilitate a donation of $100,000 and a luxury SUV by the car company to the Marfa school district. Maxwell recently received the Texas Medal of Arts from the Texas Cultural Trust and is the first person to be honored in the field of fashion. 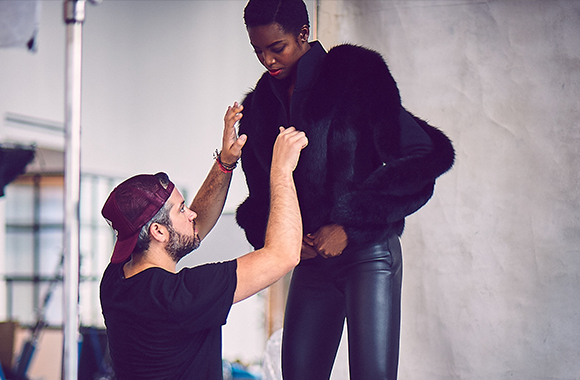 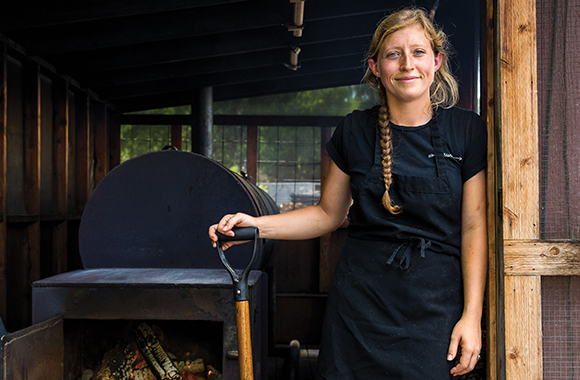 Lauren Welch ’18 is the COO and co-founder of XELPHAhealth, a healthcare solutions company helping advance quality care in resource-constrained environments via machine learning. In 2018, she was named one of Austin Inno’s “25 Under 25.”

Margaret Whitney ’07, an ob-gyn in Austin, teaches medical students and residents as a faculty member in the Department of Women’s Health at Dell Medical School at The University of Texas at Austin.

Mary Gonzalez, MLA ’09, is serving her fourth term in the Texas House as the representative for House District 75, which includes parts of the El Paso area. 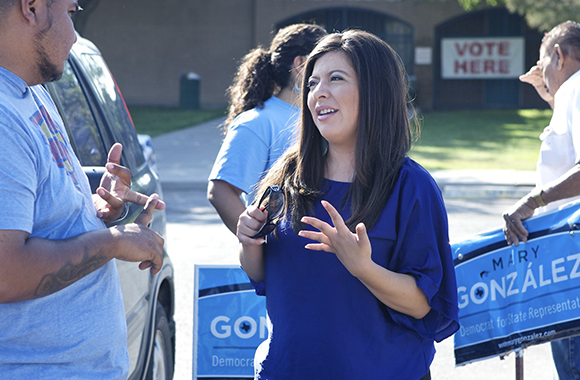 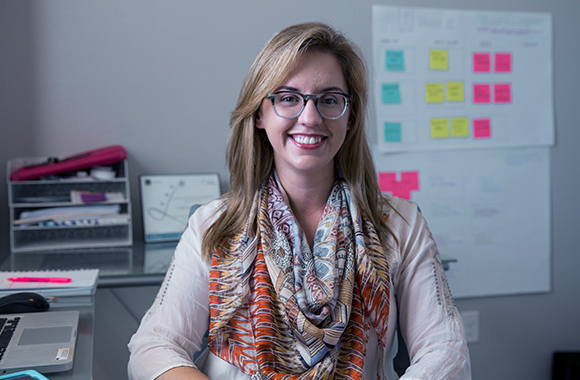 Chelsea Elliott ’12 established the half Helen Foundation, which provides hearing and vision screenings for kids in low-income communities. The nonprofit raised a record breaking $64,100 at Philanthropitch, a fast-paced pitch competition in Austin, plus an addition $5,000 from a foundation in the audience a few weeks later.

Elizabeth Gonzales ’18 is the special events coordinator for Camp For All, a barrier-free camp that works to enrich the lives of children and adults with challenging illnesses or special needs.

Emmy Award-winning broadcast journalist Marlisa Goldsmith ’11 is an anchor/reporter at KTHV-TV in Little Rock, Arkansas, and won a 2018 Robert L. Vann Award of Excellence in the TV Spot News category from the Pittsburgh Black Media Federation.

Sara Ortiz ’09 is immersed in the literary world as program manager for the Beverly Rogers, Carol C. Harter Black Mountain Institute, which publishes award-winning journals including The Believer. 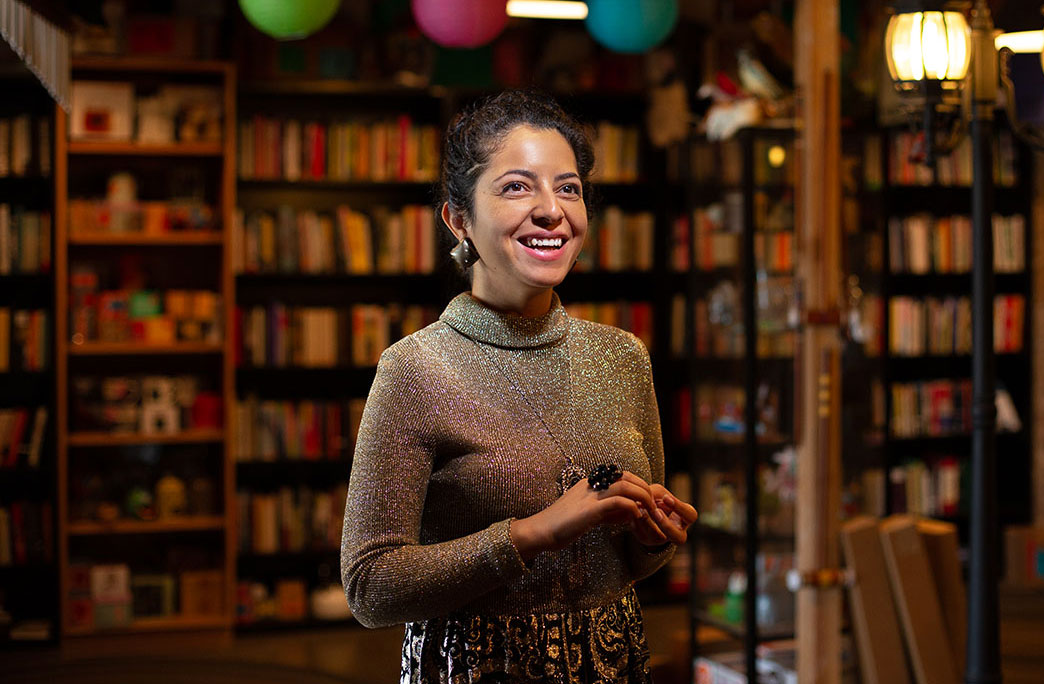 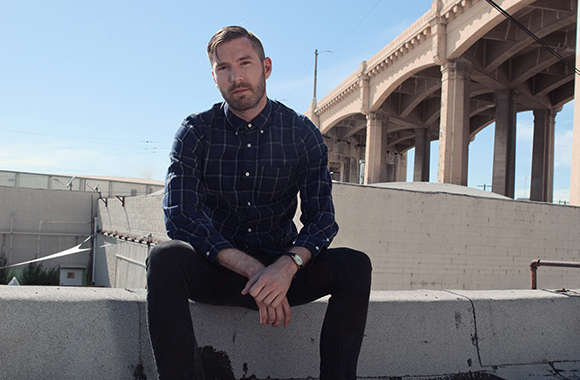 Charles Rogers ’09 is the creator and executive producer of the acclaimed TBS show Search Party as well as the co-writer and director of the feature film Fort Tilden, which won the Grand Jury Award at SXSW in 2014. His short film Men Don't Whisper premiered at Sundance last year, and he has been listed among Variety  magazine’s 10 TV Writers to Watch, Forbes’ “30 Under 30” most influential people in Hollywood and entertainment, and Out magazine’s list of 100 most influential LGBTQ people.

First Tyler Mount ’13 produced a vlog that ran for three years, drew more than 3 million followers and featured appearances by Lin-Manuel Miranda and Gloria Estefan. Then he co-produced Broadway’s Once on This Island, which won a Tony Award for Best Revival of a Musical — making him one of the youngest Tony Award–winning producers in history. 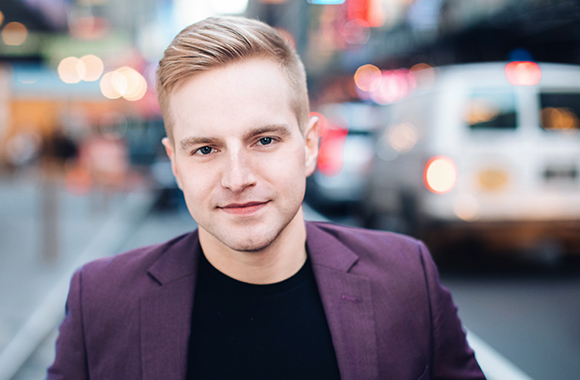 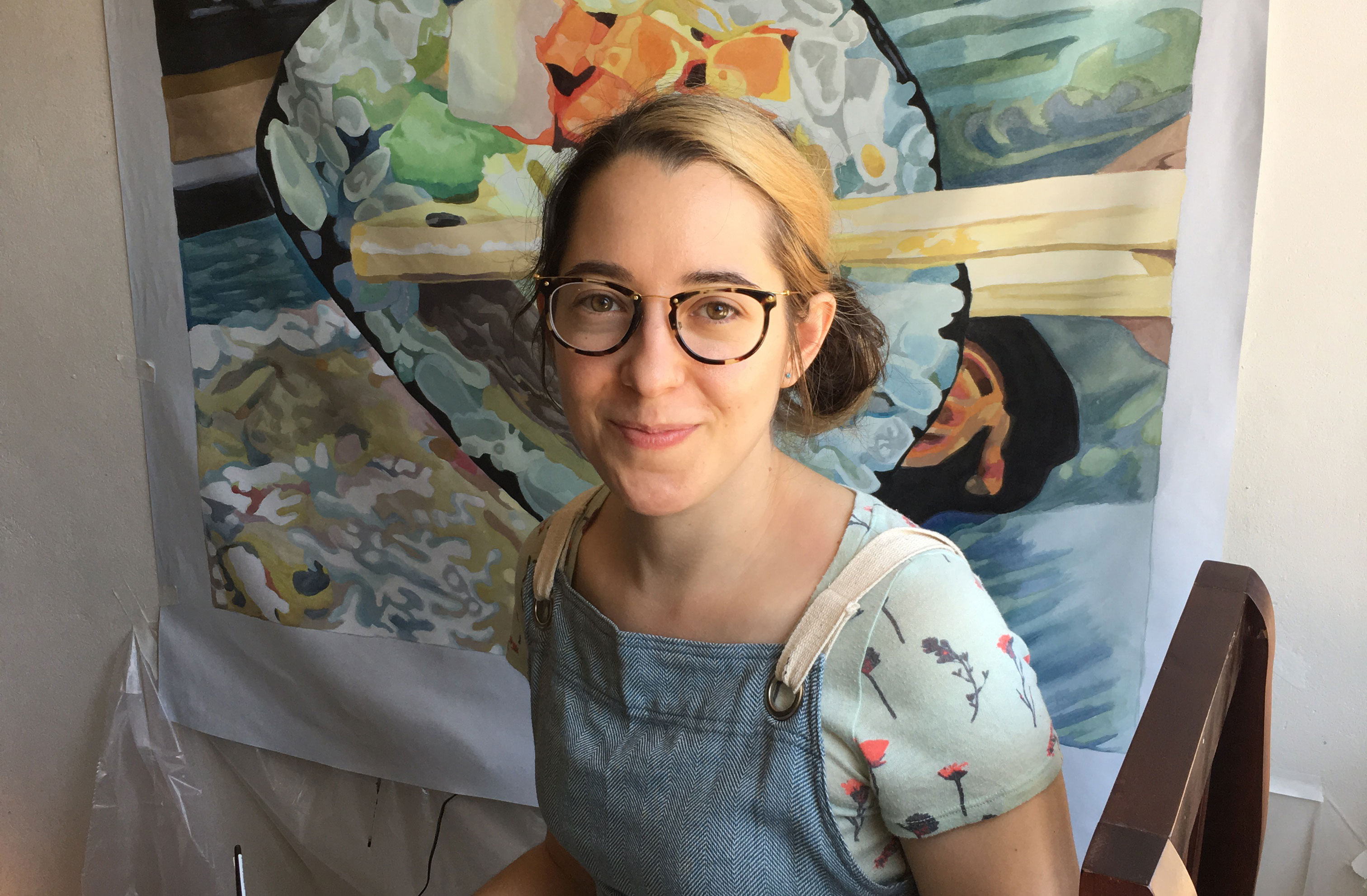 The unstoppable Kaci Beeler ’09 started the American Berserk Theatre in Austin, had a solo show at the campus gallery, was profiled in the Austin Chronicle, wrote and directed the play Killer Girls, and was featured in the film Monday and HBO’s SXSWestworld — all in 2018.

After seven years as the Managing Director of the Fusebox Festival, Brad Carlin ’02 is now a consulting analyst with TRG Arts, which helps creative organizations become more financially sustainable.