The July heat is already oppressive by 7 a.m., when Stella Cunningham ’21 arrives at a site on the banks of Waller Creek in downtown Austin. As rush-hour traffic hums in the background, she walks along the water’s edge, using a handheld device to collect data about the air quality.

After five minutes, Cunningham climbs up to street level, where the city noise is much louder, and repeats the walk in the other direction. She pauses to make sure the data has synched with an app on her smartphone, then heads several blocks north to her next site.

Cunningham’s morning walks are part of her eight-week summer internship with the Nature Conservancy, funded through the Institute for Interdisciplinary Science (i4) at St. Edward’s. The institute was established by a five-year, $1.5 million grant from the National Science Foundation’s Improving Undergraduate STEM Education: Hispanic-Serving Institutions (HSI) Program.

Urban ecologists in the Austin office of the Nature Conservancy are studying the effects of multiple efforts to reintegrate nature throughout the Waller Creek watershed. The creek winds through residential neighborhoods, The University of Texas at Austin, and an urban waterway that winds through downtown before joining Lady Bird Lake. Cunningham and her four teammates collect data about air quality, plants and wildlife along the creek to track and measure changes in this urban ecosystem over time.

Each morning between 7 and 9 a.m., Cunningham visits four sites along the creek to take air-quality measurements along the creek and on an adjacent roadway, so her team can compare the two. She then meets up with her colleagues for the day’s field research, which includes bird counts and surveys of the vegetation and trees along the creek. The students also check wildlife cameras that capture images of animals using the creek — raccoons, possums, birds — and the occasional person.

During one survey, Cunningham’s team encountered someone living in a camp in the creek bed. “Those interactions opened my eyes to different ways people are using the creek, but also to different aspects of city life,” she says. “As a student at St. Edward’s, the social justice dimensions of homelessness are always on my mind.”

Cunningham got interested in fieldwork during a weeklong research experience the summer after her freshman year, when she did vegetation surveys at a park in northwest Austin. A Mathematics major, she is considering a career in data science, which develops methods to analyze large datasets like those generated in environmental field research.

Her team this summer includes environmental science majors from the University of Texas and high school students interning with the Austin Parks and Recreation Department. Cunningham says one of her biggest takeaways is learning how to work with colleagues from different backgrounds. “Being able to use their expertise and collaborate on a diverse team was a great opportunity — not just to learn about myself, but to learn how to work with other people,” she says. 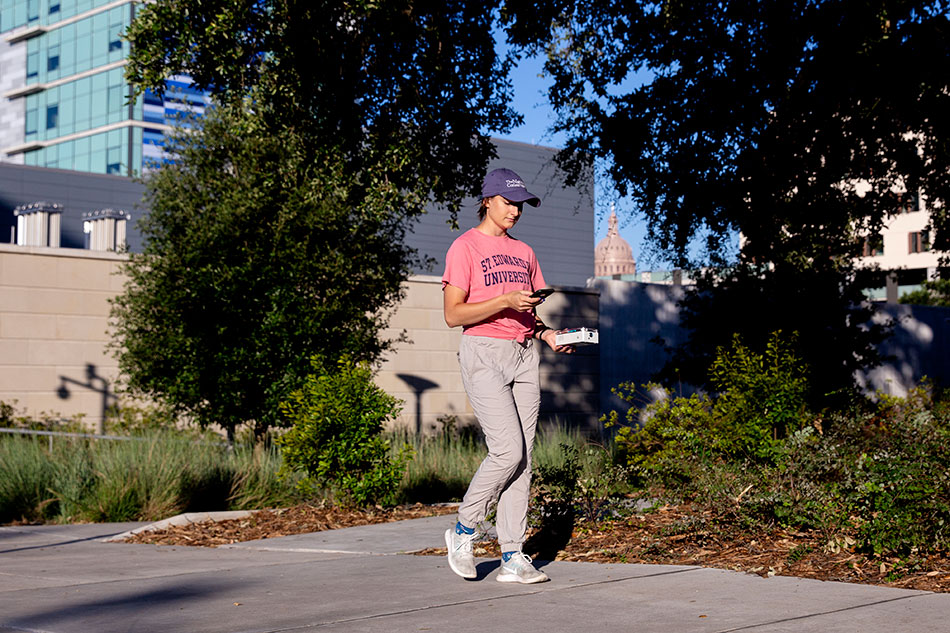 Shortly after 7 am, Cunningham starts the day’s air-quality monitoring by walking along Waller Creek near the Dell Medical School campus downtown. 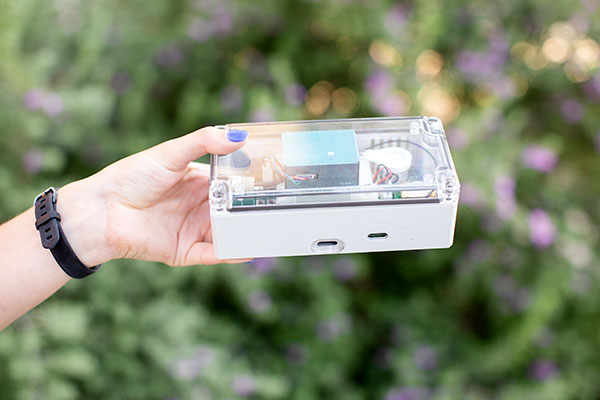 The personal air monitoring device, or PAM, syncs with an app that automatically downloads the data to a spreadsheet Cunningham can process later on her computer. 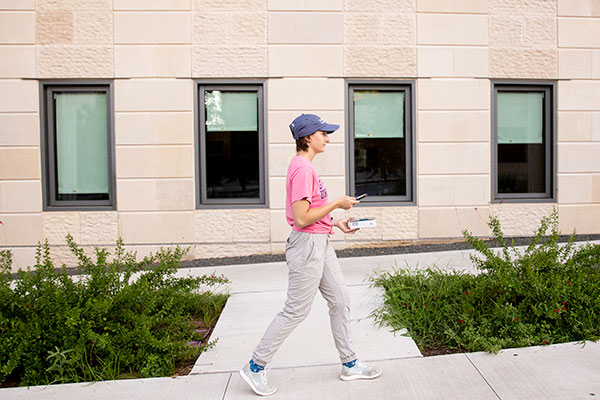 The PAM collects information about the levels of carbon dioxide, carbon monoxide and particulate matter in the air, as well as the temperature, humidity and air pressure. 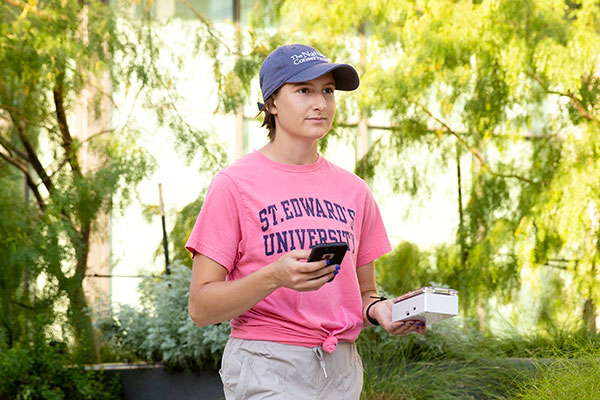 The team’s research measures the impact of restoring urban green spaces on air quality, vegetation, wildlife, and even people who use downtown parks. 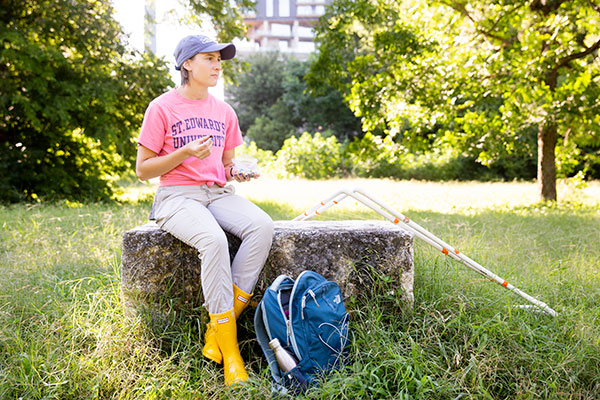 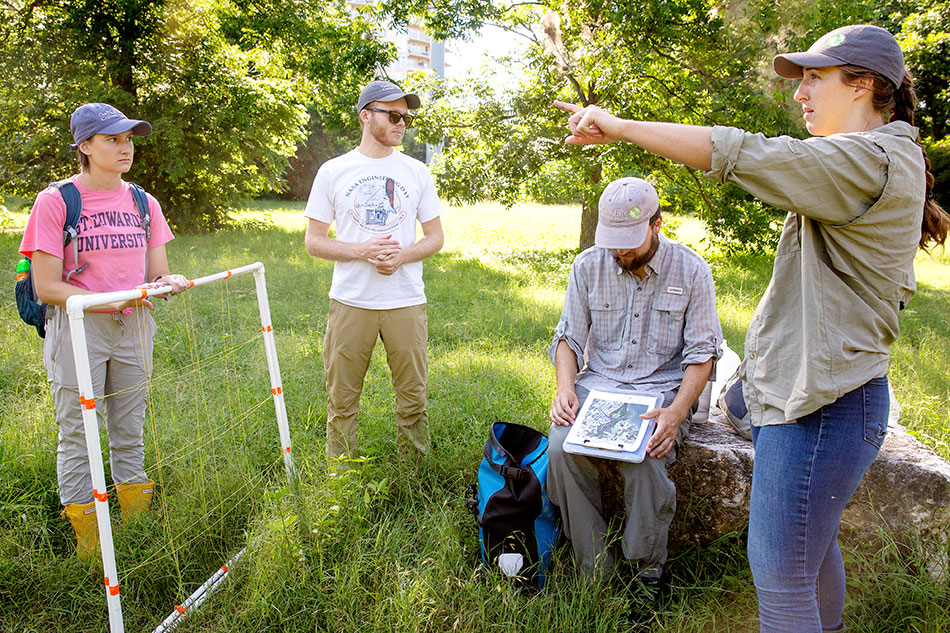 The team uses a quadrat made of PVC pipe to mark off a one-square-meter area for vegetation surveys. 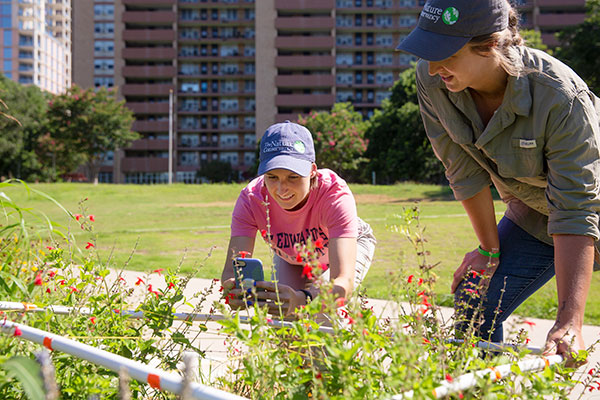 After counting the flowers within the quadrat, Cunningham and her colleagues set out traps to collect bees, flies and wasps for a pollinator count. 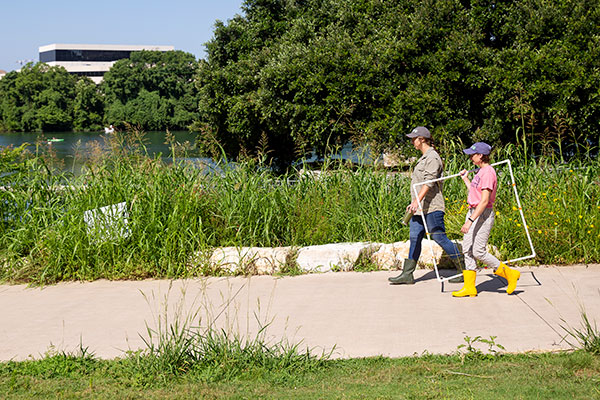 Some sections of the creek have been restored with a biodiverse range of native plants, and the team wants to see whether those “no-mow zones” have more pollinators than areas that are mowed. 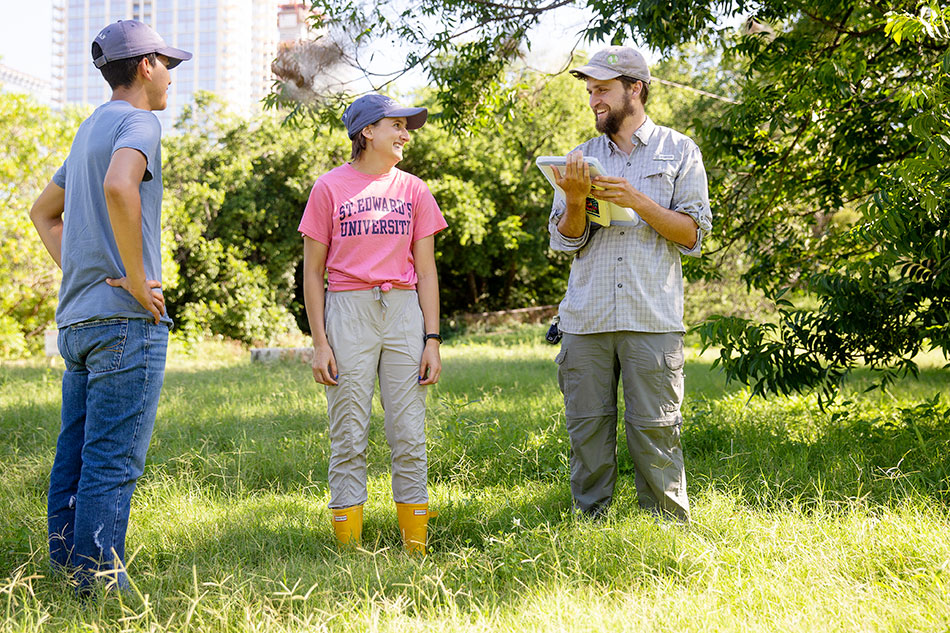 Cunningham says learning to work with teammates from different backgrounds has been one of the best parts of her internship. 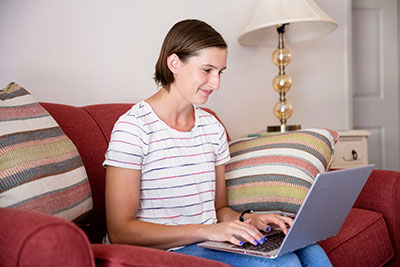 The team wraps up field work by 3 pm. Back at her apartment, Cunningham uses part of the afternoon to go through the day’s air-quality data. 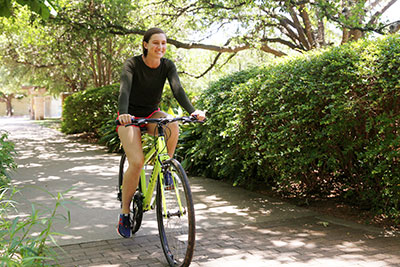 In her free time, Cunningham works out at the gym, takes a yoga class, or rides her bike to Barton Springs. 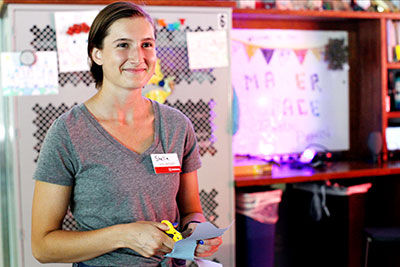 Cunningham volunteers at the Thinkery, a children’s museum, where she helps kids with projects like using craft materials to create their own shadow-puppet show. 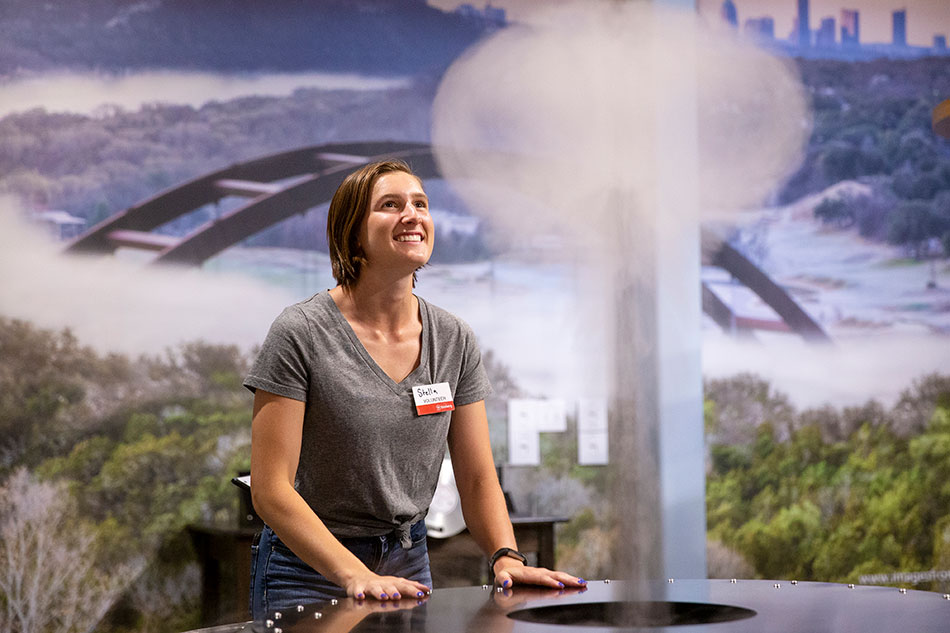 The museum offers hands-on exhibits like “Earth, Wind, Inspire,” which lets kids interact with a representation of a cloud. “Kids have crazy ideas and so much energy, and that playfulness was something I wanted to keep in my schedule by working at the children’s museum,” she says. Cunningham is considering a career in data science, which would connect her interests in environmental research and mathematics.

The Case of the Decomposing Pigs