Behind the Scenes at SXSW with Executive Director and St. Edward's Graduate Mike Shea. 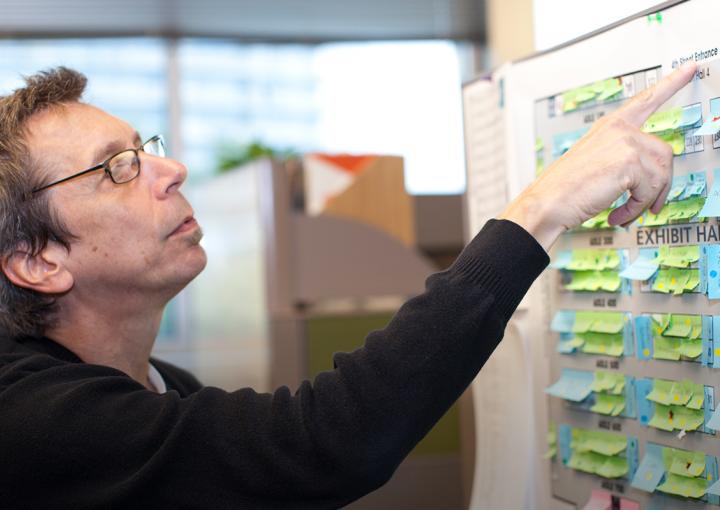 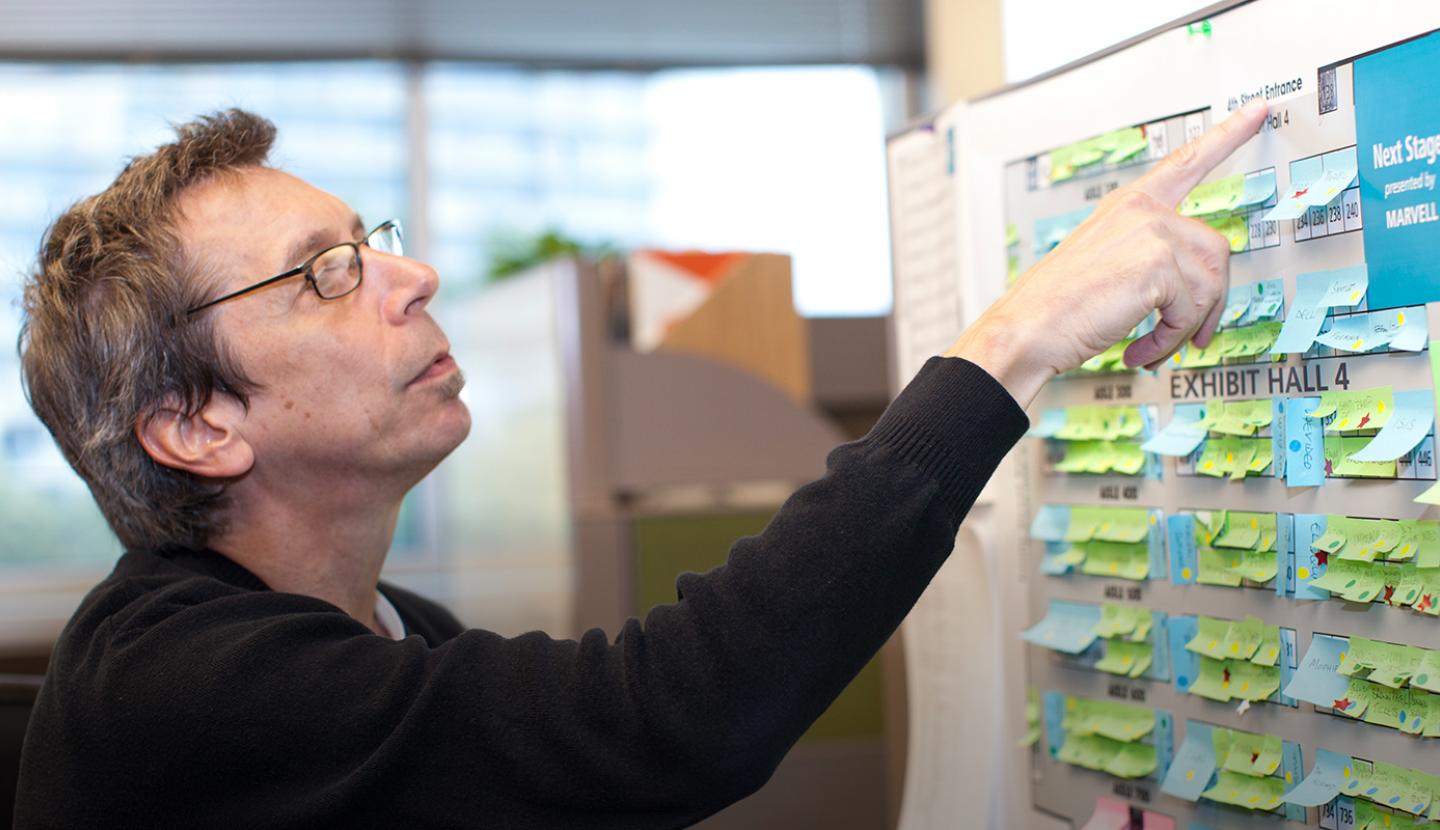 Mike Shea ’89 is executive director of the legendary SXSW festival. St. Edward’s gives you an inside look at Austin’s most famous event — and event planner.

Mike Shea ’89 has handled a canoe along 50 miles of the Brazos River during drenching storms. He has hiked through snow and over frozen streams in the Grand Tetons while watching for bears. And he’s done this all with a handful of teenage boys under his supervision.

But surviving some of nature’s — and the Boy Scouts’ — toughest challenges with his two sons is nothing compared to the feat Shea accomplishes every March when some 60,000 people descend upon Austin for South by Southwest. The annual music, film and interactive conferences and festivals draw a crowd from 70-plus countries and pump more than $190 million into the local economy.

And Shea is in charge of logistics.

“It’s the stuff no one else wants to do,” he says humbly. But without that “stuff” — hotel contracts, meeting spaces, transportation, permits and security, to name a few — SXSW couldn’t happen. Though the events last only 14 days, Shea and his co-directors (along with a full-time staff of 110 or so) spend all year planning and preparing.

All Quiet On The SXSW Front

Shea arrives at work an hour or two before everyone else. While many of the city’s commuters are searching for parking or ordering mango smoothies from the Whole Foods headquarters across the street, he walks through the dark hallways of the SXSW offices, past a gaggle of high-top tables shoved into a corner after a recent launch party, past a wall of films submitted by 5,000 hopeful moviemakers, past an enormous grid outlining the 10 venues used by the interactive portion of the festival alone.

Still hopping from two strong cups of his favorite Third Coast Double French Roast, Shea settles into his office and returns emails and voice-mail messages. He goes over hotel contracts that he’s arranged through 2018 and references a calendar with SXSW dates through 2030. Occasionally, he gets up to stare at the mounted floor-to-ceiling schematics of Auditorium Shores, the Austin Convention Center and the Hilton, all leaning against one wall. These two quiet hours are the only time to prepare for the daily onslaught of meetings, meetings and more meetings.

“As much as I might not want to spend most of my day in meetings,” he says, “the only way to make an event like this happen is to communicate.” On tap for this particular Monday is a 10 a.m. meeting on revamping the housing reservation system, then a 1 p.m. standing meeting with the registration and housing teams, followed by a 2 p.m. web meeting and a 4 p.m. conference call.

On any given day, he might meet with someone from City Hall or the Convention & Visitors Bureau, hotel executives, concert-hall directors, or event planners from around the world, not to mention SXSW’s internal sales, marketing and accounting teams.

After 20 years with SXSW, Shea knows the days of preparatory meetings come to an end all too soon. Time eventually runs out. “The good and bad thing about events is that they’re going to happen, whether you’re ready or not,” he says. “You just kind of ride the tiger once it starts moving.”

Eye Of The Tiger

Shea does more than ride the tiger. He steers, directs and roars back when necessary, all with a calm demeanor and a clear head.

“When considering a new project or element to SXSW, Mike will analyze each different way to approach a potential problem with myriad solutions,” says Darin Klein, SXSW’s comptroller.

“If he were a pro football coach, I’d want him to be the one drawing up all of the Xs and Os.”

Klein remembers a snafu years back when a local hotel overbooked during SXSW. No one realized it until guests from across the globe started hauling their suitcases to the counter to check in. That’s when Shea stepped in.

“I’m not sure how he did it, but there was a problem one day, and the next day it was solved,” says Klein. “That was the last we heard about it.”

Then there was the time Waterloo Park turned into a 10-acre mud puddle thanks to an overflowing Waller Creek just days before concerts scheduled there. Shea and his team decided to cover the park in hay. They called a local farm and asked how much they would need. “The farmer feeds hay to his animals,” says Shea. “He had no idea about blanketing a park.”

For Shea, relying on instinct also means being frugal.

“Frugality gets you through downturns and keeps you prosperous in good times,” Shea says. “Not to get all ‘I’ve seen ’em come, and I’ve seen ’em go’ — but, well, I have. Our cheap ways have helped keep us in business where others have failed.”

He has a system. When deciding whether to spend festival funds, he and his team first brainstorm ways to get what they need for free. If that doesn’t pan out, they list the least expensive options. And if that doesn’t lead to a solution, they discuss if they really need whatever it is they’re considering.

That’s how, one year, in the absence of an appreciable signage budget, laser-printed directional signage glued onto towers of white cardboard boxes ended up all around the convention center. “Did it look grade B? Probably,” says Shea. “Did it get the job done? Absolutely.”

Shea and his fellow directors are committed to neutralizing SXSW’s impact on the environment.

“We’re asking a lot of people to climb on planes and fly here — that’s a lot of jet exhaust, and that’s problematic,” he says. “We try to make everything as sustainable as possible.”

That includes offering solar-powered cell-phone charging, setting up water-bottle refilling stations, collecting 2.34 tons of compost and 5.4 tons of recyclables from Auditorium Shores alone, and arranging for attendees to share 150 bikes — one of the country’s largest free-share bike programs.

Shea initiated meetings with representatives from area hotels so they could share best practices. SXSW encourages sponsors to offer giveaways people actually want — T-shirts, beer, USB drives — instead of fliers that immediately get tossed in the trash. In October, they wrapped up the second annual SXSW Eco, a three day gathering where business, nonprofit and academic experts discuss topics like “Life in the Street: Reclaiming Public Space” and “Digital Strategies for Environmental Guerrillas.”

“Across the United States, the world, every company faces the same challenges of running a sustainable company,” says Shea. “Here, they all go back with something they can use.”

That’s part of the satisfaction for Shea, the reason he gets excited year after year. “The biggest joy is knowing that 60,000 people came to Austin and learned something or had their film picked up or got a record deal or won the app competition,” he says. “Knowing I’m a part of that process is hugely rewarding.”

Another perk? Meeting some of his heroes. Like Bruce Springsteen. Spike Lee. An “extremely nervous” Johnny Cash preparing to give his keynote. Little Richard, “who was just … Little Richard.” (And some who didn’t live up to his expectations: “One presenter was hugely egotistical — wait, I can’t tell that story,” he says.)

“This job is a lot of things. Boring is not one of them,” he says. And it is just a job, albeit a really cool one. “For better or worse, there are challenges every day. What allows me to keep coming back is knowing how to manage my expectations. I do the best I can with what I’ve got,” he says. “At the end of the day, I close down my laptop, get in my car and go home, kiss my wife and kids, and have dinner — that’s what’s important.”

Having a life outside the office has always been a priority. Just before his older son was born, he decided to go back to college (he’d dropped out before moving to Austin). He managed to juggle full-time SXSW responsibilities with a newborn and New College’s intricate portfolio process, where he earned credit for many of his life and work experiences. In just a year and a half, he graduated with a degree in Communications and a minor in English Writing and Rhetoric, all with a second son on the way.

As his boys grew up, he helped lead their South Austin Boy Scouts troop (and protect them from those bears in Wyoming). He reviewed books for Texas Monthly for a decade — for fun. He loves the Boston Celtics and the Red Sox, just as he did growing up in Massachusetts. And for the past 18 years, he’s played in a weekly poker game with a handful of close friends (and Austin notables in their own right, like KUT Music Director Jeff McCord and his old boss, former Texas Monthly editor Evan Smith).

At the poker table and away, “Mike is calm, unflappable — the opposite of reckless,” says Smith. “He’s extraordinarily deliberate and doesn’t like to leave anything to chance.” That’s unfortunate for his poker opponents. But for the thousands who flock to Austin each spring to see what he’s planned for them? It’s like hitting the jackpot.

The History Behind Human Diet