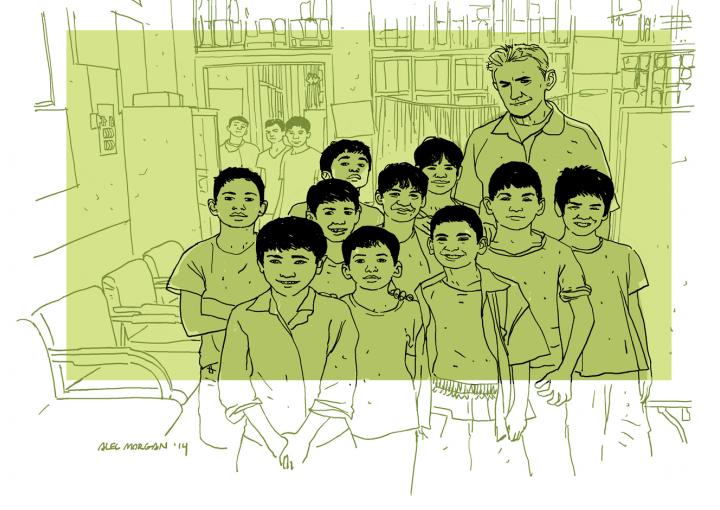 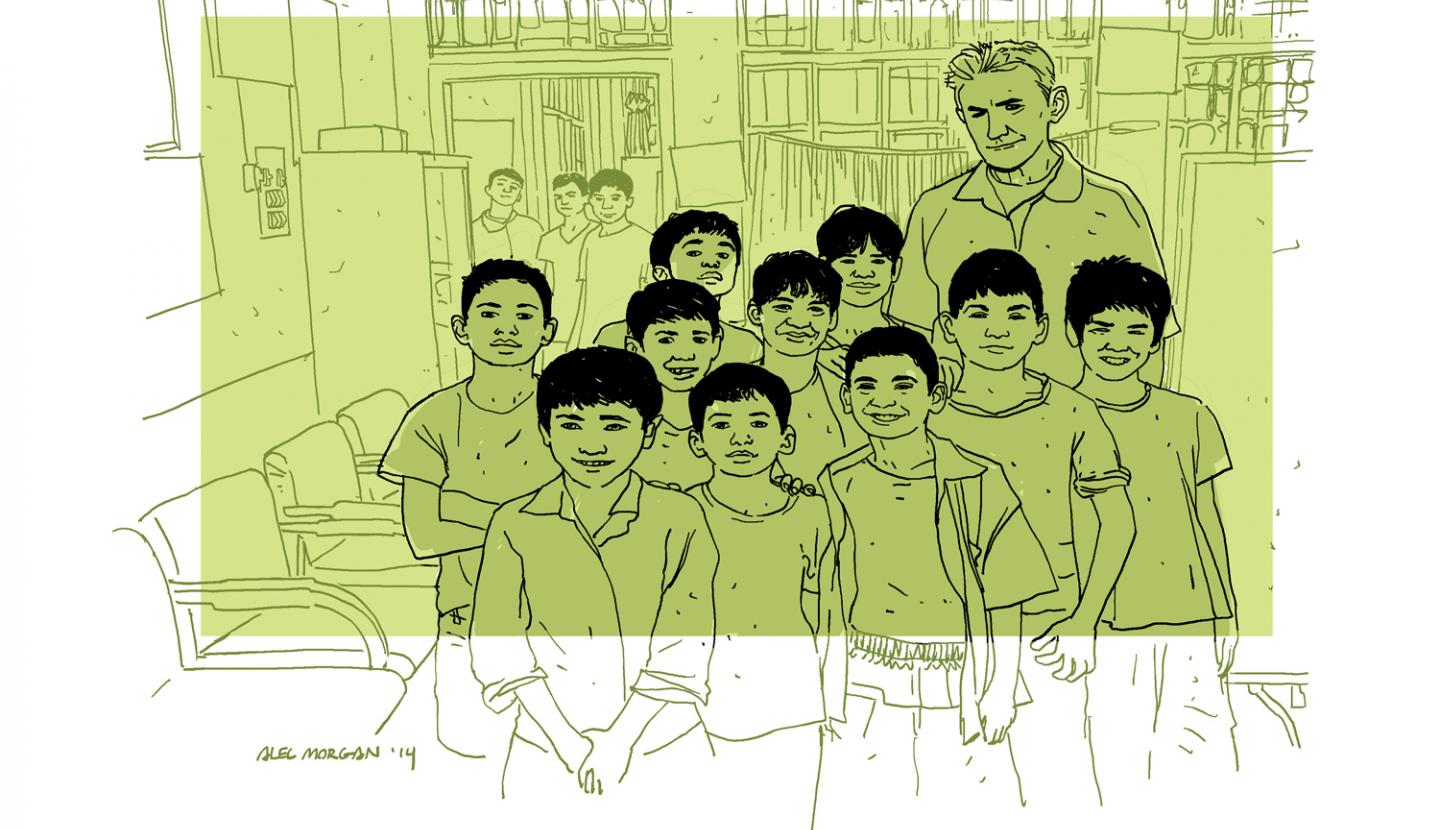 Brother Ronald Drahozal, CSC, ’61 has helped thousands of drug addicts in Bangladesh since opening the country’s first treatment center 26 years ago. Last summer, he introduced 17 students to his work — and to what selfless service really means.

When Mark Spinks ’17 left his hotel in downtown Dhaka, Bangladesh, to explore the city with classmates from St. Edward’s University, he had mastered dhonyobad, the Bengali word for “thank you.” He was prepared for the smothering humidity of monsoon season. And he knew to watch for impatient drivers who would casually clip slow-moving pedestrians.
But the little boy with facial deformities and dirty, shoeless feet, maybe 6 or 7 years old, who approached with outstretched hands startled him. He and his classmates took the boy and the girl he was with inside a corner grocery, communicating primarily with gestures and smiles, and bought milk and snacks for them. It felt good to help, says Spinks.

“Until we realized there were children just like them on every street corner — and we couldn’t help them all.”

Brother Ronald Drahozal, CSC, ’61 is a corn-fed Iowa farm boy who became a Holy Cross Brother in 1958. The septuagenarian can also name every drug available on the streets of Dhaka — and he knows where to get them. Dandy. Yaba. Ganja. Heroin. He rattles off the list as easily as the alphabet.

Drahozal knows these names because, for more than 26 years, he’s worked with the addicts battling their effects. In 1988, the Congregation of Holy Cross opened Bangladesh’s first addiction clinic, with Drahozal as founding director. In 1994, he became executive director of a larger facility on the outskirts of the city. Ashokti Punorbashon Nibash, APON for short, is the only center in the country with dedicated services for child and female addicts, as well as programs for male addicts.

Of Bangladesh’s roughly 6 million drug users, about 14 percent are children — Drahozal has worked with addicts as young as 4 years old. Some don’t know their own names or where they came from, and most have little, if any, contact with their families. Virtually all smoke cigarettes; many have sniffed glue and smoked pot; and by the time they reach Drahozal’s center, many have become addicted to sleeping pills to numb themselves to the routine beatings common in the slums.

“Most people don’t notice these kids; others consider them a nuisance,” says Drahozal. “And those who should protect them beat them like stray dogs and steal what little money they have.”

But when they get to Drahozal, they find something different. Plates of food. Clean clothes. A place to shower and sleep. “I believe they have a basic right to be treated as human beings,” he says. “They deserve life, food, education and medical care — and we seek to relieve their sufferings with loving care, not increase them.”

The idea to add an international trip to the university’s Freshman Studies curriculum grew out of the class’s common theme for Fall 2013 — human rights. Holly Carter, director of the Office of International Education, and Alex Barron, director of Freshman Studies, spent the summer of 2013 brainstorming and researching ideas, projects and locations over lattes in the campus coffeehouse.

“We wanted to expand the conversations that would be happening on campus and take them beyond that first year, beyond campus even,” says Barron. “Holly really laid down a challenge. She said, ‘Instead of thinking about human rights in the developing world, what if we go there and see for ourselves?’”

When Barron pitched the idea to students, Andrea Ojeda ’17 had one reaction: Yes! “This is exactly the reason I came to St. Edward’s — for opportunities to do things I’ve never done before,” says Ojeda. “I wanted the chance to be in a situation where I didn’t know what to expect so I could grow and learn from that.”

So last July, Barron and Carter — along with Ojeda, Spinks and 15 other students — flew to Dhaka to observe programs run by BRAC, a Bangladesh-based nonprofit focused on creating opportunities for the world’s poor. The students had studied the organization and its success during the school year. “There’s a tendency to think that because we’re more advanced in the United States, we’ll be able to go in and help,” says Barron. “We really wanted to turn that preconception on its head and show students how people in the developing world are becoming leaders and problem-solvers in their own communities.”

The group from St. Edward’s visited a school, a maternity clinic, and a convenience store and fabric shop financed by micro-loans — all in Korail, Dhaka’s biggest slum and home to more than 40,000 people. The students also spent time in the countryside observing workshops on sanitation, leadership and legal rights. It was an intense seven days, says Ana Avalos ’17 — “I just resolved myself to learning and listening as much as I could.”

Drahozal was a fresh-faced 25 years old when he arrived in Bangladesh in 1962, one year after finishing his bachelor’s degree in Education from St. Edward’s. He led a spiritual program for seminarians, ran the candidate program for those in Bangladesh who wanted to join Holy Cross, and taught at schools in Dhaka and rural villages. “Slowly, I began to feel something inside telling me that teaching was my plan — and that God had this other plan for me, even though I didn’t know the first thing about drugs or addiction,” he says.
First, he visited Nepal and India to meet with brothers and priests from other congregations who were running rehab centers. “I talked with and listened to addicts; I read and learned everything I could; and then I came back to Dhaka to start a center with almost no resources,” he says. “But through all the struggles and difficulties, I felt I was doing God’s work, and that was success enough.”

Today, Drahozal’s APON center serves some 220 addicts, including 90 children. “We don’t use the word clinic, which indicates the use of a lot of medicine to help or hurt addicts in the process,” he says. “Our aim is behavior change.”

The children’s program at APON accomplishes that change by offering group therapy, basic education classes that prepare students to take the government’s graduation exam, services in four major religions, vocational training in woodworking and candle-making, and daily physical activity like cricket and soccer. The program lasts one year, though some children stay much longer and others choose to return to the streets after just a few weeks.

“No matter how long they are with us, they leave knowing some vocational skills that help them find work, and they can read and write so they will be able to keep learning all their life,” says Drahozal. “They also know what is needed to get off and stay off drugs — and where to find help if they need it.”

On the last day of their week in Dhaka, the group from St. Edward’s had one more stop on their itinerary — a visit to APON. Though not officially affiliated with the BRAC programs the students had spent the week observing, Drahozal had gotten in touch with Carter and Barron and asked about connecting with the students from his alma mater.
Carter and Barron had worked out the logistics with Drahozal well in advance, but on that last evening of the long week, nobody wanted to go. “After a week without much reprieve from the poverty everywhere around us, we were weary,” says Avalos. “We all decided we would go through the center as quickly as possible and not ask any questions. We just wanted to get it done.”

Carsick and cramped, they arrived at APON and tumbled out of the van, right into fresh air and green grass. “Brother Ronald’s place contrasted so completely with the crowded city and the slums,” says Avalos. “It was open, calm and peaceful. Exactly what we needed.”

After touring the grounds and talking with some of the children and staff (many of them recovering addicts), the group from St. Edward’s had biscuits and tea with Drahozal.
Minutes later, two boys came in and sat down across the room. Drahozal went to work. He brought the boys heaping plates of hot food. He spoke to them gently in their native Bengali. He arranged for space in the dormitory and let them know they would have a bed to sleep in that night, and every night for as long as they needed.

“For Brother Ronald, it was an everyday experience. For us, seeing that kind of urgent need, especially in children, was devastating,” says Carter. “But we also got to see how his life’s work is changing lives. He is the most caring, unselfish person I have ever seen in action.”

“It was amazing to see how much comfort the boys drew from Brother Ronald,” says Ojeda. “They felt welcomed, and maybe even loved for once.”

In 1988, when he began working with addicts, Drahozal faced a nearly insurmountable struggle. “All the addicts I knew told me they didn’t know anyone who had gotten off drugs and stayed off. They presumed they would die using drugs,” he says. Today, there are thousands of recovering addicts all over Bangladesh. “I truly know this is God’s work, not mine,” says Drahozal. “The results are amazing — well beyond my abilities, wisdom and knowledge.”

The students felt that power, too. “The van ride back to our hotel couldn’t have been more different from the one to APON. It was magical,” says Avalos. “More than magical — we had hope.” The students talked about “how and when we could come back,” says Ojeda. And they brainstormed ideas like creating and selling a calendar of the children’s artwork and organizing a cadre of volunteers from St. Edward’s.

“We got to see the extent of Holy Cross’ impact on the world and how far their reach is,” says Ojeda. “Brother Ronald really showed us the difference between doing something for someone versus doing something with someone.”

“His passion is a reminder that no matter where we’re from or what we’ve been through, we are all created in God’s image,” says Avalos. “And if you look at the people around you, even a drug-addicted child who has forgotten his own name, you see how grace connects us all.”

Learn more about how students at St. Edward’s are changing lives and enriching their own through service experiences across the Austin community, the United States and the world.

A Different Kind of Spring Break