Professor of Chemistry Eamonn Healy searches for hope for those suffering from Huntington’s disease. 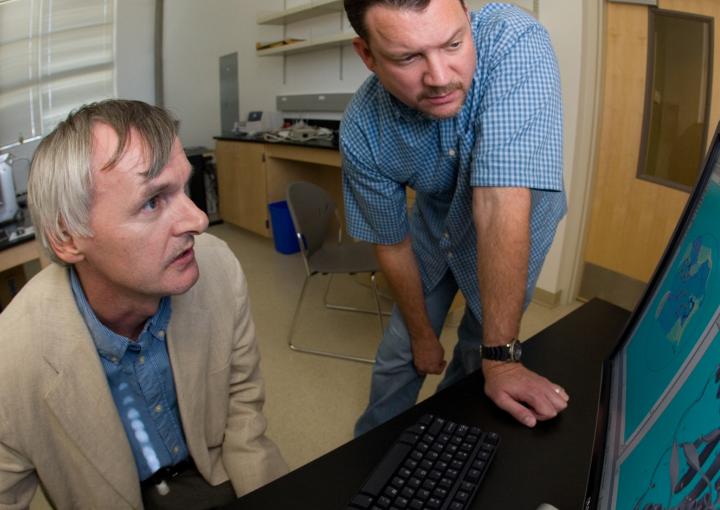 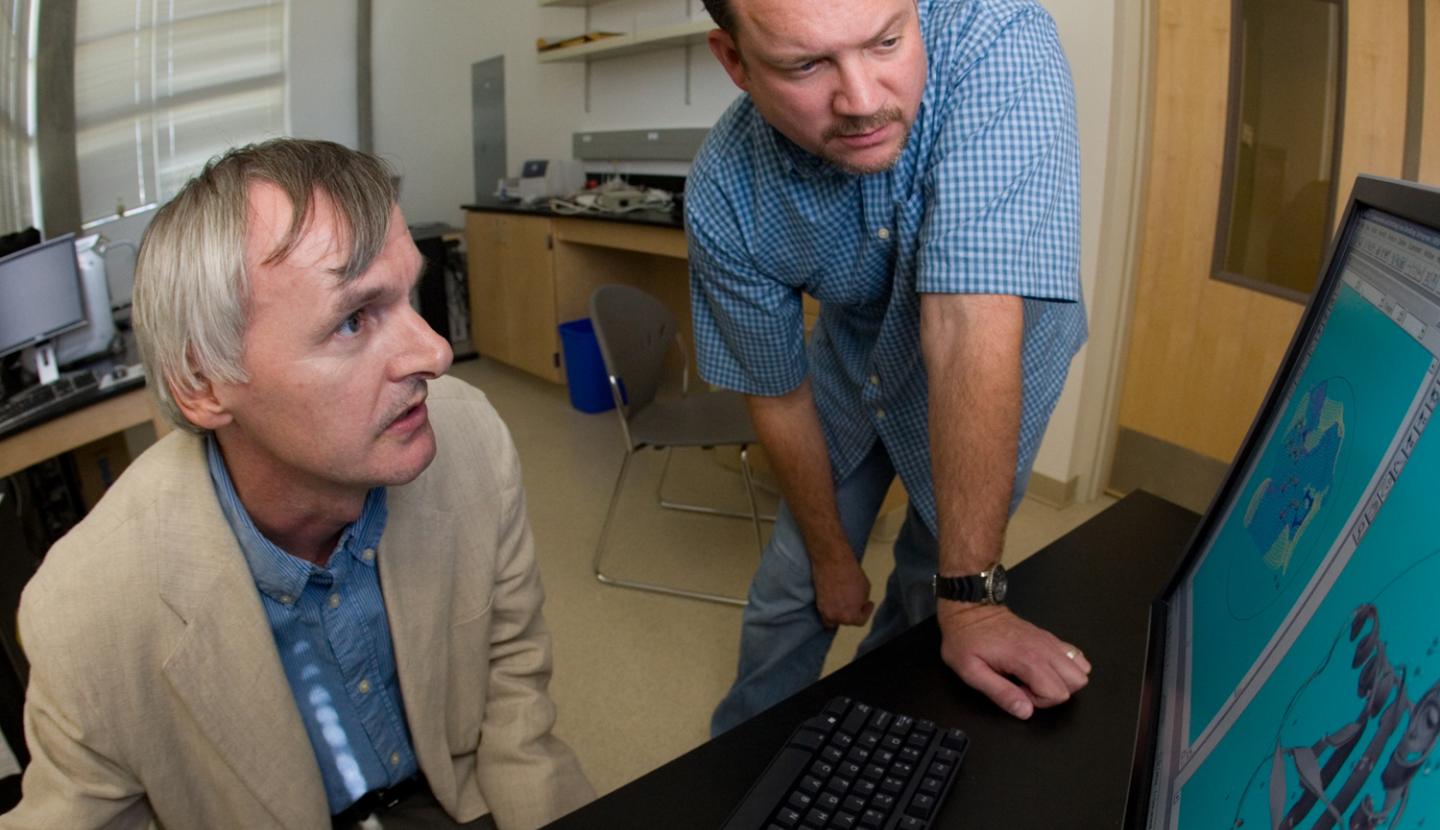 Hundreds of thousands of people are currently affected by incurable and fatal diseases known to scientists as polyglutamine repeat diseases. Huntington’s disease — perhaps most well-known as the disease that took Woody Guthrie’s life — falls into this family and limits an individual’s ability to walk, speak, think and ultimately function.

Professor of Chemistry Eamonn Healy is researching new avenues of treatment for Huntington’s disease. In this Q&A, Healy shares his insights about this family of diseases, his research and what promising new treatments might be on the horizon.

These diseases are caused by a genetic defect, thus people are born with them. For people who carry both copies of the genetic defect, certain proteins are expressed in a way they shouldn’t be. Unfortunately for some and fortunately for others, it depends on how many “repeats” one has. So if the defect — or number of repeats — is lower than a certain threshold, the disease might never develop. But once a certain number of markers is reached in the body, then the disease develops, and eventually, the symptoms begin to manifest.

Huntington’s is considered an autosomal dominant disease, meaning that if one of the parents has the marker, then the child has a 50 percent chance of developing the disease. If both parents have it, the child will definitely develop it. In most cases, these individuals will develop the disease as an adult. It is degenerative and will lead to their death.

Can you explain what protein misfolding means and how it relates to degenerative diseases?

All of the proteins in the human body have a specific shape, and they adopt that shape by folding, like origami. As long as those shapes are normal, then those proteins operate normally. But more importantly, they get broken down after an appropriate time, which is what is supposed to happen in a healthy person.

If a protein misfolds, its shape will be abnormal, and that can affect a number of things. Once they misfold, the proteins can’t be broken down, so those proteins tend to accumulate. They have to be put somewhere. Eventually, they crowd out other components of the cells, and the cells start to breakdown instead of just the proteins breaking down. Thus, we have diseases that are typified by holes, which occur when the cells filled with misshapen proteins start breaking down. When those holes occur in the central nervous system, you get diseases like mad cow disease. For diseases like Huntington’s, the breakdown occurs in the nerves and the nerve cells. These diseases are progressive and debilitating because of the physical destruction of the nerve tissue that occurs.

For Huntington’s, the disease tends to occur in middle adulthood, which is when the proteins have accumulated and the crowding and the breakdown are significant enough to become noticeable.

What are some of the early symptoms that someone is suffering from Huntington’s disease?

The first symptoms tend to be cognitive because we’re talking about the central nervous system. There’s often changes in mood, temperament and behavior. Next, there can be extreme psychological symptoms, which might manifest as schizophrenia. This tends to be followed by physiological symptoms, where someone’s gait or speech becomes impaired. Eventually, these all combine and affect memory. Mental abilities decline and coordinated movement becomes difficult. At that point, the body begins to shut down, and the progress is relatively rapid and the body eventually succumbs to the disease.

Right now, are there any known ways to prevent this type of disease?

For Huntington’s — and for all of these so-called polyglutmaine repeat diseases — there is nothing that can be done other than to try and mitigate the symptoms. In terms of the disease itself the only thing available right now is genetic profiling, which allows individuals with a family history of the disease to find out whether there is a likelihood or if it’s a certainty that they will develop the condition.
Once the condition develops, there is a limited amount that can be done to prevent the symptoms. There are treatments to mitigate the symptoms, but there’s no possible way to treat the disease.

What new treatments do you hope to uncover in your research?

Intellectually, the obvious point of treatment would be to prevent the proteins from misfolding. But we are at the very beginning of understanding how proteins fold — and whether it’s good folding or bad folding. We understand the big picture, but getting the details is more difficult. To put it into perspective, there are tens of thousands of proteins in the human body, and they all fold in different manners.
Eventually, the goal would be to control the folding of the protein. If we could manipulate how the protein folds or come up with a way for the human body to deal with proteins that fold into incorrect shapes, then we’d be on our way to curing Huntington’s.

What’s new and exciting about this line of research?

What we have now is the promise of enlisting the body’s own repair mechanisms in the treatment of these now-untreatable diseases. This parallels recent discoveries in fighting other conditions, such as cancer. Even if we can’t develop drugs and other therapeutics, maybe we can trick the body to do the work for us.

What’s the process of taking the research done at St. Edward’s and moving it into some sort of treatment available to those living with these diseases?

My approach is to model the operation of proteins while at the same time modeling the body’s response to them. Once we get a good understanding of this, we need to probe that hypothesis to prove or disprove it. Associate Professor of Biology Peter King’s immunologic work allows us to test our theories in the lab.

After the theories have been tested, we then take those results and publish them. From our perspective, the most important thing is to get that information out there for drug companies and other researchers who might be looking for another way to think about this disease and potential avenues of treatment.

Right now seems to be a very exciting time for Huntington’s disease research. What have scientists learned that has made this time so productive for new research?

Because of research in modern genetics, molecular biology and modern biochemistry, we are beginning to understand these diseases at the molecular level. This fine-grained analysis — rather than just looking at tissues, organs and cells — allows for a type of research that we could never do before. All of these have combined for massive developments on a scale and in a timeframe that we wouldn’t have been able to achieve as few as 10 or 20 years ago.