See how the cast and crew of the St. Edward's Mary Moody Northen Theatre bring a play to life. 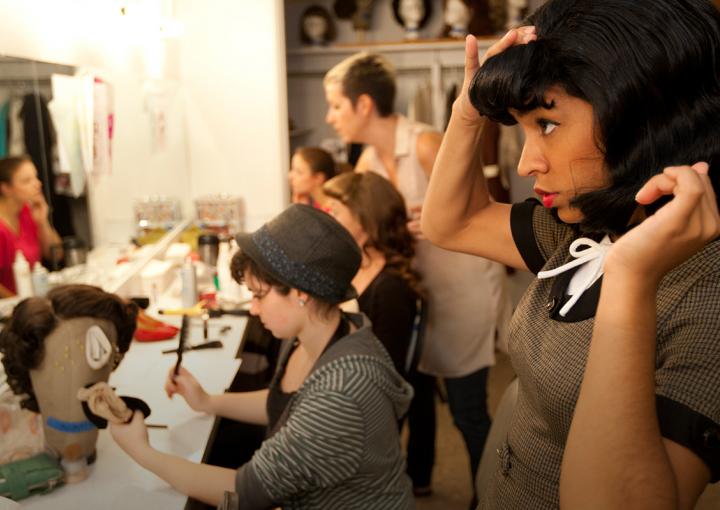 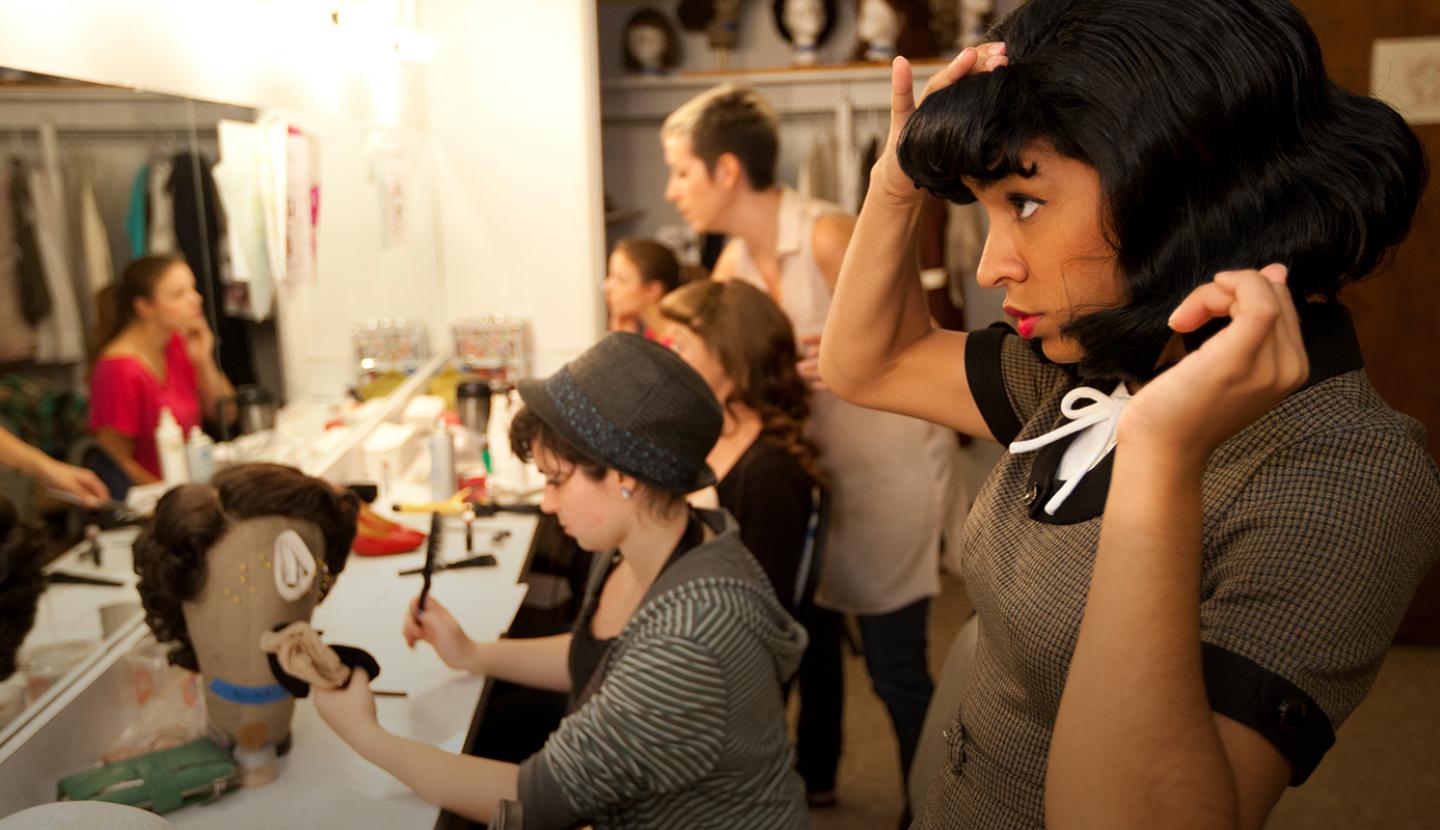 Months before a show opens at Mary Moody Northen Theatre, the work begins. Fake turkeys are constructed, wigs are coifed and scenes are blocked. Here’s how the cast and crew bring a play to life.

On the Mary Moody Northen Theatre stage, four young women sing. Some are in costume, others wear sweatshirts to ward off the cold. The theater is freezing without an audience of warm bodies, but the actors still give it their all until Stage Manager Bill McMillan dismisses them from warm-ups.

It’s the night before the St. Edward’s University theater production of Under Construction opens. For the first time in his stage career, Director David Long is excited instead of nervous before a play. He takes a seat, jumps up and paces to the other side of the theater, like a child waiting for Christmas.

Backstage, the male cast members wait in their dressing room. “Man circle?” someone asks, a long-running St. Edward’s tradition. The actors gather and hold hands. For 30 seconds, they silently focus on the show.

The lights dim. The actors sprint to their positions.

“Places, please, for the top of the show!” shouts McMillan. In the darkness, actors wheel benches and tables into place. The lights reveal a picture-perfect family from the 1950s over Thanksgiving dinner. A bell dings.

Seventy minutes and 22 scenes later, the actors gather around a family dinner table that recalls the first scene, this time with a bucket of fried chicken and paper plates. The lights cut again. “The End” is projected on the viewing screens. Nobody moves.

A clap of thunder, the chorus from “It’s Raining Men” and then the actors laugh, breaking the spell. Long is on his feet again, directing the single unfinished part of the production — curtain call.

At Mary Moody Northen Theatre, students work alongside guest artists from around the country under the University/Resident Theatre Association agreement with the Actors’ Equity Association. This means that when students graduate, many have already earned points toward Actors’ Equity membership, which can give them an edge in auditions. Whether students aspire to act, direct or work behind the scenes, the program prepares them with a well-rounded understanding of theater: They perform, build sets and props, and even work the box office.

Here, we take you behind the scenes of Under Construction, the first production of the theater’s 40th anniversary season. Mary Moody Northen Theatre is a theater-in-the-round without a traditional backstage, but one can still slip behind the metaphorical curtain for a closer look at creating a professional show like this one.

Work on Under Construction began well before the start of the Fall 2012 semester, even earlier than most shows at the Mary Moody Northen Theatre because of the play’s complexity. From scouring thrift shops for costumes to visiting local salvage yards for props like steering wheels (which wound up being built from scratch instead), it’s the groundwork that sets the stage, so to speak, for the actors to come later.

To bring a show to life, actors must be at the top of their game, especially for a demanding show with more than 20 scenes. Catch a glimpse of life for the cast as they prepare to go onstage.

It all comes together the week before opening night: tech rehearsals, dress rehearsals and finally the preview. Running through the whole play gives the team multiple chances to work out the kinks so everything runs smoothly during the first performance.

For the past four decades, Mary Moody Northen Theatre has hosted established and up-and-coming theater professionals, onstage and off. Generations of Hilltoppers who got their start here have gone on to great things in New York, California and around the world.

This year, we’re pulling out all the stops, from Shakespeare to American realism, to celebrate our 40th anniversary. Under Construction may be over, but the season is still going strong. Don’t miss William Shakespeare’s Measure for Measure (Feb. 14–24), Oscar Wilde’s classic The Importance of Being Earnest (April 11–21) or the magical, Tony Award–winning musical The Secret Garden (June 13–30).