With a new film in theaters, Charles Rogers '09 is just getting started 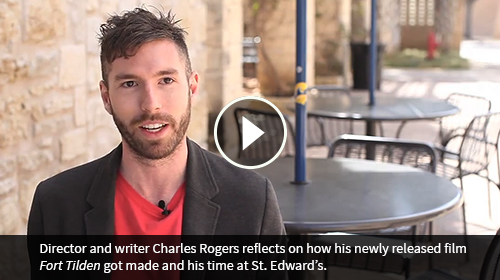 Just over a year ago, Charles Rogers ’09 was sitting in New York City wondering when he should move to Los Angeles for his career. Then Fort Tilden, the feature film he co-wrote and co-directed, won the 2014 South by Southwest Grand Jury Award. We talked with the Communication major about how his life has changed since his indie film took home that big award.

What was the impact of winning the Grand Jury Award?

Right after the festival, Sarah-Violet Bliss [Rogers’ co-writer and co-director on Fort Tilden] and I signed with our agent. We spent 10 days in L.A. on a so-called water-bottle tour, where you meet with producers, managers and directors and drink lots of bottled water. We toured with Fort Tilden at festivals over the summer, and in October, I moved to L.A. That day, I got the call that we had been hired as writers for the Netflix series Wet Hot American Summer: First Day of Camp.

We also wrote for season two on the Amazon series Mozart in the Jungle. Sarah-Violet and I are developing a new project together, and I’m writing a feature film to direct. Fort Tilden will be released theatrically and on video-on-demand in August, and it will be my first feature film to screen in theaters. It’s crazy to think that it’s been one year since South by Southwest and how much has changed.

When did you know you wanted to be a writer?

My parents bought a video camera when I was 6 years old, and I started making movies. I’m an only child, so I entertained myself. Writing was a big part of that. My grandmother was one of my best friends, and we used to make films together. I made this one short film, in which she played a Girl Scout who had come to sell me cookies. When I let her into my house, I discovered she was actually a Bosnian spy.

Fort Tilden is a comedy, and now you’ve written on two comedy TV shows. What’s the most challenging part of writing that genre?

It’s said that writing drama is easy, but writing comedy is hard. I think people who say or think that might not be funny. In some ways, I find it a little harder to write straight drama. One of the most difficult things about comedy, though, is getting excited about a character or a joke that could be taken further, but for the sake of the tone or story, you have to rein it in.

What’s the one thing that’s stuck with you from St. Edward’s?

[Associate Professor of Communication] Marilyn Schultz taught a documentary class. She was a really awesome woman, larger than life. She helped me with my application to graduate school at New York University, and she and [Associate Professor of Religious Studies] Father Lou Brusatti held a mock interview with me. When I told Marilyn I got into NYU, she started crying. [Assistant Professor of Communication] Billy Earnest called me three weeks later and told me Marilyn had passed away. She didn’t need to help me, and she did, even when she was sick.

You’ve said that you think St. Edward’s is a very nurturing place. How did that prepare you for a cutthroat industry like show business?

Show business is very competitive. In fact, that’s kind of all it is. It’s all competition because it’s all rooted in the outcome of the projects. One thing I learned at St. Edward’s is not to compare myself to other people. You kind of have to put blinders on and focus on what you’re working toward, and that’s really served me well.