The Kozmetsky Center of Excellence in Global Finance was created to gather people and resources so as to better understand an increasingly interdependent and interconnected world. The center brings attention to the growing reality that national economies and societies impact one another.

We do this through activities such as:

Our mission is to make an impact far beyond the campus of St. Edward's through interdisciplinary scholarly activities and in international forums. We seek to benefit our students and the broader community by advancing understanding to tackle the challenges of an increasingly integrated world.

Learn more about the Kozmetsky Center, its goals and accomplishments.

The Kozmetsky Center supports student learning in a variety of ways, including holding meetings and discussions with international experts. Our goal is to prepare students to better grasp national and international economic, social and political complexities and their local consequences, and to encourage students to take an active role in shaping society in an increasingly globalized world.

The Kozmetsky Center of Excellence in Global Finance was established through a $3 million gift from Ronya Kozmetsky and her late husband, George. The couple, noted for their philanthropic leadership in Central Texas, established the RGK Foundation in 1966 and since then have awarded grants totaling more than $60 million to support humanitarian concerns in the areas of education, community and medicine/health.

Ronya and George Kozmetsky envisioned a Center of Excellence in Global Finance that would make an impact far beyond the campus of St. Edward's, benefiting not only students at the university — through interdisciplinary scholarly activities on campus and in international forums — but also individuals around the world who will be affected by sustainable financial stability.

Dr. Sharyl Cross was appointed Director of the Kozmetsky Center and Distinguished Professor at St. Edward’s University in 2013.

Dr. Cross' interests and expertise are in global security studies, international relations and comparative politics. Previously, Cross was professor in the College of International & Security Studies at the George C. Marshall European Center for Security Studies in Garmisch-Partenkirchen, Germany. She was director of academics for both the Program in Advanced Security Studies and Senior Executive Seminar, and served in key leadership capacities for the Marshall Center’s strategic outreach engagement initiatives in Russia/Eurasia and South East Europe. Prior to the Marshall Center, Cross was at the United States Air Force Academy where she had been appointed distinguished professor of political science.

Learn more about Dr. Sharyl Cross and former directors of the Kozmetsky Center. 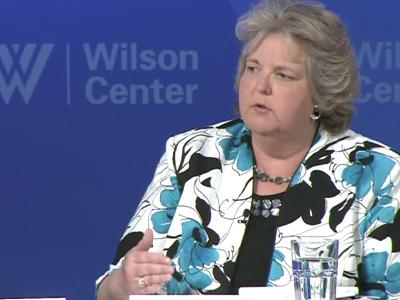 Cross is Panelist for Talks on NATO Expansion

In May, Sharyl Cross, director of the Kozmetsky Center, spoke on a panel at the Wilson Center focused on NATO expansion and European security, which aired on C-SPAN. 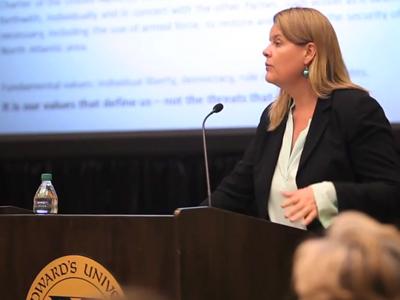 The Kozmetsky Center hosted a presentation given by Mari Skaare, the NATO Secretary General’s Special Representative for Women, Peace and Security. Hear a student, the center’s director and Skaare speak about this experience.

The Kozmetsky Center recently hosted a lecture by Edward J. Williams, a leading expert on border regions and migration throughout the world, who discussed the socio-economic dimensions and human hardships of the migration crisis between the U.S., Mexico and Central America.