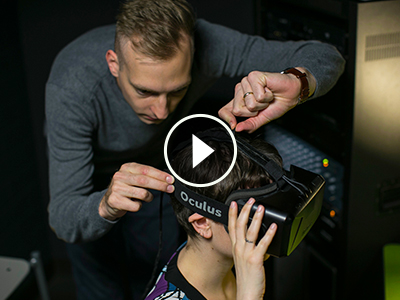 For most people, the Oculus Rift is the coolest new gaming peripheral, the next step in realistic virtual reality — a fun toy with incredible entertainment potential. But for Psychology major Cody Antunez ’14, it was an irresistible opportunity to dig into some serious academic research.

Make no mistake; Antunez likes to have fun, too. He’s a published songwriter, an accomplished musician and and enthusiastic gamer. But he’s also driven by an insatiable craving to learn.

Antunez knew he wanted to conduct research with his mentor, Professor of Psychology Alan Swinkels (the two bonded over a shared love of psychology and music). All they needed was the right subject.

“Our general idea from the start was applying the Oculus Rift outside of gaming,” Antunez says. “I was taking Industrial Psychology (the study of psychology in the workplace) with Professor Swinkels, and I thought, ‘What if the Oculus Rift could be used for workplace training in dangerous environments?’ The device could be a safe training tool for workers on oil rigs, for example. And it would be cheap enough that even small businesses could afford it.”

Antunez took the lead, with Swinkels contributing advice, experimental design and data analysis. For his research purposes, he wanted to demonstrate that the Oculus Rift could be used in an occupational setting. Antunez taught himself the Unity 3D and Unreal Engine 4 development tools and created a simple experience that could test how users responded to instructions within the virtual space.

In a formal test with human subjects — their experiment required approval from the university’s Institutional Review Board — participants were asked to move around in a virtual environment and complete two tasks. The first task briefly showed participants a color-coded key and then instructed them to place colored spheres in the correct bin. The second involved a scavenger hunt of sorts: Participants navigated an environment to find color/number sequences and instructions on where to go next.

In both tasks, participants were timed and checked for accuracy. “It was an exploratory study in the truest sense of the word,” Swinkels says. “Even though some of our hypotheses didn’t pan out, I think we learned a wealth of information about what’s possible with this technology — in an environment you wouldn’t normally think of.” The technology demonstrated promise in the area of workplace safety, but further experiments are needed to determine how it might be used.

“Initially, I came in with all these big ideas,” Antunez says. “I had to chip away and determine what was actually possible. This really expanded my way of thinking about how research is done and how the world works, as well as learning tools I’d never encountered before.”