When students at St. Edward’s University are interested in finding internships at the Texas State Capitol, they always find themselves being directed to one man for guidance. Brother Richard Daly, CSC, is the campus’ resident expert on the world inside the granite walls of the Capitol building. 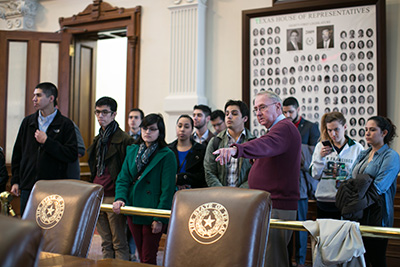 Daly spent 30 years as the lobbyist for the Catholic bishops in Texas. He served as executive director of their organization, the Texas Catholic Conference, for nearly all of his time there. Even though he has left that position, he remains current on the political issues facing the state and is still well-known and respected among those who spend their days working with the Texas Legislature.

Daly’s history at St. Edward’s University extends back more than 50 years. He graduated in 1961 with degrees in history and English. He later returned to the university where he was director of University Relations from 1972 to 1974. He remains an adjunct faculty member to this day and still teaches a class on the legislative process.

Daly often takes his classes and other school groups on tours of the Capitol. Anyone along for the tour can quickly see that Daly knows this building and the people in it well. He stops at offices of elected officials, the House and Senate chambers, historical rooms and paintings to share stories. More often than not, people take the time to say hello to him or flash a smile his way. In politics, a world many perceive as cold and fast-paced, Daly has made his way through kindness and consistency. 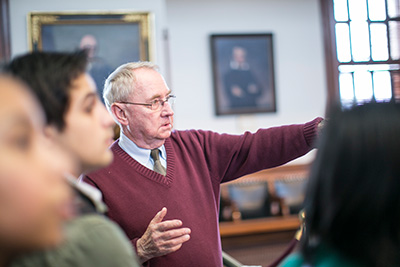 “I was lucky enough to get the Daly Capitol tour twice in my time at school. Seeing how many people he knows there was just awesome, because he really has connected with so many people during his time,” said alumnus Chris Naley who is now working in the Office of University Advancement on campus.

When students are looking for internships, Daly will often meet them in Jo’s Coffee Shop on campus. He arrives on time and always well-dressed. He greets students with a handshake and sits down with a briefcase full of information about various internship opportunities. He also talks about who he knows at each organization and who to talk to when applying. 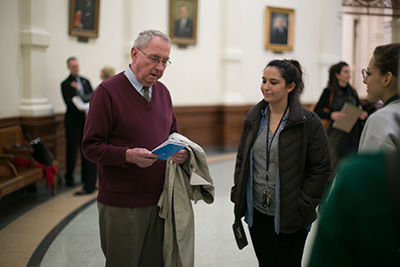 “He goes through the different organizations one by one and knows everything about each of them,” said Colin Stonecipher, senior political science major. “He really takes the time to get to know you and line up your passions with the work.”

Daly’s dedication to his work and his students is exemplified in his unwavering support for the next generation of politicians. After half a century, Daly has given so much to the St. Edward’s community and continues to do so.