Main Building, constructed in 1888 on the highest elevation point on campus, and one of the highest in Travis County, gives spectacular views of the ever-changing Austin skyline. From its vantage point, giant cranes, steel pillars and glass walls of new construction dot the city’s horizon. Main Building has seen, and endured, many changes from its perch on the hilltop.

In 1903 the first Main Building on this campus burnt down to its foundations but was rebuilt that same year. Tragedy struck again in 1922 when a tornado tore through campus, leaving a large hole in the south side of the building. The last major renovation of Main Building, completed in 1986, focused on repairing the structural integrity of the exterior walls and bringing the building up to current city codes.

This summer, the third major restoration effort to the exterior of Main Building began — this time to mend the damages of time. A careful matrix of scaffolding has covered the iconic tower as workers replace stones of the exterior limestone walls, improve drafty windows and make repairs to the building’s red roof.

Perhaps the most exciting part of this phase of restoration is one that won’t be easily seen at first glance. This fall, the original bell in the tower of Main Building will ring again for the first time in more than 25 years. The bell, which is being restored, was made in 1904 at the Henry Stuckstede Bell Foundry Co. in St. Louis, Missouri. Throughout its 126-year history, Main Building has relied on community support and donations to preserve and repair the most loved and recognized landmark on our campus. Over the past year, St. Edward’s has received generous support from 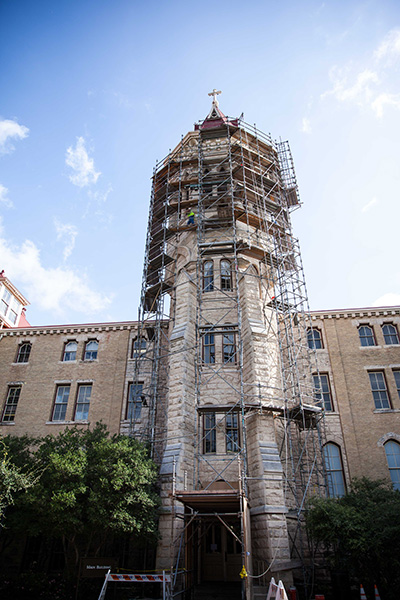 The Fondren Foundation, The Cullen Trust for Higher Education and the Austin Convention and Visitors Bureau Heritage Grant Program, raising more than $1 million of the estimated $6 million to $8 million needed complete the restoration.

For many, Main Building represents the spirit of the St. Edward’s campus. As Holy Cross Brother and former university president Stephen Walsh, CSC, said, “In a very real sense, we can all say that we have left our mark. However hard and durable that stone is, it is soft enough to give way to us. Over the years, the hard edges of the front steps have become rounded and smooth. So when I climb those steps in the morning headed to my office, I am aware as at no other time that I am following in the footsteps of others.”

Main Building is a registered Texas Historic Landmark and is designated a National Historic Site. It was built the same year as the Texas State Capitol building.