AUSTIN, Texas — On behalf of the Board of Trustees, St. Edward’s University is pleased to announce the selection of Montserrat “Montse” Fuentes as its next president.

Fuentes, a native of Spain, will be the first Hispanic president to lead St. Edward’s, representing a significant milestone for the university, which is a Hispanic-Serving Institution and is recognized as 8th in U.S. News & World Report’s Best Regional Universities in the West ranking. She will also become the second female president in the university’s history, a role held by Patricia Hayes from 1984–1998.

Fuentes will assume the role on July 1, 2021, succeeding President George E. Martin, who is retiring in June 2021 after leading the university for 21 years.

After an extensive national search, the university’s Board of Trustees unanimously selected Fuentes because of her deep knowledge of higher education and her shared commitment to social justice and the Holy Cross mission of educating the heart and mind.

“Dr. Fuentes has a dedication to providing world-class scholarship and classroom teaching, an unsurpassed commitment to diversity, equity and inclusion, and a clear vision for the university’s future,” said Steve Shadowen '80, Board of Trustees chair. “She is the right leader to move the university forward in the growing and evolving state of Texas and in the dynamic, global city of Austin.” 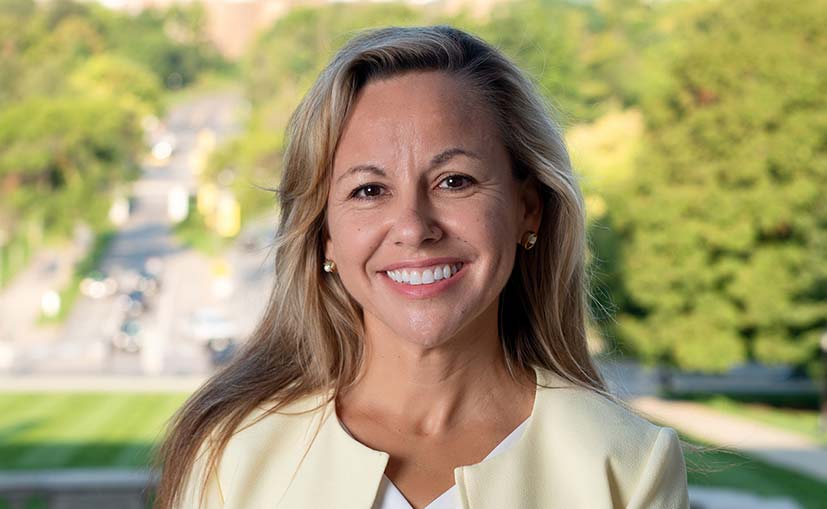 Montserrat Fuentes was named president of St. Edward's University. She will assume the role on July 1, 2021.

Fuentes, an accomplished administrator, professor of Statistics and researcher, was most recently executive vice president and provost for the University of Iowa, where she championed entrepreneurial and real-world training, curricular initiatives, leverage of technology, and civic engagement to enhance student success.

“St. Edward’s is an immensely vibrant institution with boundless opportunities,” she added. “I look forward to helping St. Edward’s reach the next level of excellence, while continuing the university’s commitment to offer a relevant, personalized and transformative educational experience that prepares students to be driven by purpose and to aspire to bring positive change to our world.”

As a first-generation college student who earned a dual degree in math and music, Fuentes shares the university’s dedication to providing a top-notch education for all students. She immigrated to the United States after she was recruited as a graduate student by the University of Chicago, where she earned a PhD in Statistics.

Since then, Fuentes has accrued two decades of experience as a faculty member and administrator. During her role as department head at North Carolina State University, she was named the inaugural Goodnight Distinguished Professor of Statistics, and also served as a director of a National Science Foundation (NSF) research center for atmospheric sciences named STATMOS.

Before becoming executive vice president and provost at the University of Iowa, Fuentes also served as dean of Humanities and Sciences at Virginia Commonwealth University.

As a researcher, her interests include big data, brain imaging analysis, statistics for spatial data, uncertainty analysis, computer models, interdisciplinary applications in neurosciences, environmental and health sciences. Her work addresses scientific and societal problems in brain imaging, weather forecasting, climate change, air pollution and human health effects from pollution, as well as studies of pregnancy and pregnancy outcomes for both the mother and child.

Fuentes’ research has received funding from the NSF, the United States Environmental Protection Agency (EPA), the National Oceanic and Atmospheric Administration (NOAA), among others. Her work has been published in top scientific journals, and she has authored or co-authored numerous book chapters and two books on statistics.

On top of her academic roles, Fuentes has served on committees and advisory boards for the EPA, the National Academy of Sciences and the National Institute of Health, along with other organizations and nonprofits.

Throughout her career, Fuentes has sought to promote diversity, equity and inclusion. In recognition of her efforts, she received the Equity of Women award in 2013 for major contributions to the equity and wellbeing of women at NC State University. She was also selected as the NC State University faculty liaison for the Office for Institutional Equity and Diversity in 2014 to support women and minorities as they manage a successful career in academia with family responsibilities.

The Board of Trustees said they are confident that Fuentes will continue to lead the university on a path toward growth and excellence set by her predecessor President George E. Martin.