Austin, TX (Feb. 14, 2013) – St. Edward’s University today announces a cash gift of $20 million that will provide scholarships for up to 150 students per year. The generous gift, provided by Pat and Bill Munday of Austin, is the largest single gift in the university’s history. 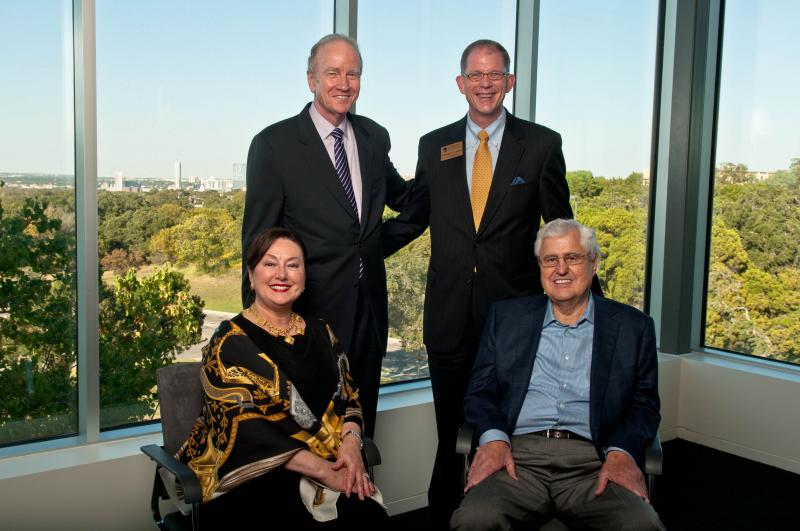 “Through their extraordinary generosity and commitment to providing young men and women educational opportunity, Bill and Pat Munday have made it possible for St. Edward’s to continue its mission of providing talented students access to higher education no matter what their financial circumstances,” said George E. Martin, president of St. Edward’s University.

The $20 million cash gift provides an immediate infusion to the university’s endowment resulting in a 38% growth, and raising the endowment to $76.8 million. The new scholarship awards will be approximately 25% of tuition. It is estimated that between 125 and 150 students annually will benefit from the new scholarship funds.

“In my lifetime, I’ve given away a few dollars,” said Bill Munday of his philanthropic efforts. “Every nickel I’ve ever given to St. Edward’s has been used wisely. With this gift, Pat and I want to make sure that talented and financially needy students have the opportunity for an education.”

Pat Munday’s interest in St. Edward’s stems from her experiences on campus as a student, and from her service as a university trustee. “As donors and friends, this gift is an expression of our steadfast commitment to education for all and not just the privileged few, said Pat Munday. “We believe that St. Edward's students, transformed by their educational experience, are better able to fulfill their potential, meet future life challenges and become socially responsible individuals with the intelligence and character needed to make a difference in the world.”

Pat Munday has given generously of her time by serving as a university trustee beginning in July 2005. In May 2011, she was re-elected to a term that will run through June 30, 2014.

Bill and Pat Munday are the university’s largest donors, having contributed more than $36 million since 2003. The Munday’s commitment to providing scholarships began in 2003, when they provided a $500,000 endowment for scholarships.  In 2004, Pat and Bill Munday made a gift of $385,000, which completed fundraising efforts for the John Brooks Williams Natural Sciences Center–North.  Most recently, in 2011, a gift of $13 million from the Mundays provided funding for a state-of-the-art library and learning center that is scheduled to open in the fall of 2013 and will be named The Munday Library.

Michael Larkin, vice president for University Advancement, has collaborated with the Mundays for nearly 10 years as their desire to support St. Edward’s has developed.  “The generosity of Bill and Pat Munday demonstrates extraordinary trust and commitment to St. Edward’s, and we are honored. Their latest gift at its essence represents the true spirit of philanthropy: a love for humanity coupled with a desire to improve opportunity for those less fortunate.”

Michaela Larson, a Political Science major from Lakewood, Washington, explains how a Munday Scholarship is helping her realize her goals after graduation. “After I graduate, I would love to work with nonprofits to help them obtain funding to keep their programs going. Many of the opportunities I received as a child were made possible by nonprofit organizations. This scholarship gives me a chance to attend a university that will truly help me make a difference in the world. I am willing to work hard, and this generous contribution allows me an equal chance to prove myself both as a student and an individual."

The Munday Scholarship has been awarded more than 160 times since 2003, and there are 51 current scholarship students.

St. Edward’s is a private, liberal arts, Catholic university in the Holy Cross tradition with more than 5,000 students. Located in Austin, Texas, with a network of partner universities around the world, St. Edward’s is a diverse community that offers undergraduate and graduate programs designed to inspire students with a global perspective. St. Edward's University has been recognized for 10 consecutive years as one of "America's Best Colleges" by U.S. News & World Report, and has also been recognized by Forbes and the Center for College Affordability and Productivity.