The Holy Cross Institute sponsors a variety of programs for education, formation and transformation of board members, administrators, faculties and staffs, students and other members of school communities on the rich history, mission and traditions of Holy Cross. Additionally, we provide research into these values and their application in education, teaching and leadership in the present time and into the future. 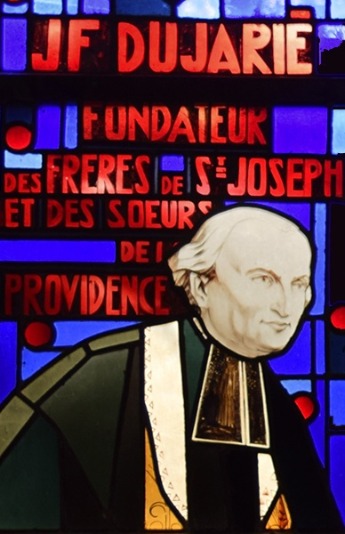 ***Due to last week's extraordinary weather conditions St. Edward's University has canceled both Homecoming and the HCI February 25th webinar.  We hope to reschedule this webinar for sometime later this Spring. ***

Originally a 5-part monthly webinar series, the series continues to expand and will run through the remainder of Spring 2021.  To view the recordings of Webinars 1 thru 5 and beyond, please scroll down and click a webinar title below, or go to the Holy Cross Institute YouTube channel.  The HCI YouTube channel also has recordings from past HCI Convocations and from other events. Please feel free to enjoy these videos at your convenience.

Webinar #1: Early History of the Brothers of Holy Cross

In recognition of the 200th anniversary of the Brothers of St. Joseph, now the Brothers of Holy Cross, the Holy Cross Institute at St. Edward's University sponsored a five-part webinar series featuring Holy Cross Brothers and Priests whose research and lived experiences reflect on this 200 year history.

The first webinar features Br. George Klawitter, C.S.C., who has written extensively on the life of Fr. Jacques Dujarie, founder of the Brothers of St. Joseph, and the mission and ministry of the early Brothers.

Webinar #2: The History of the Congregation of Holy Cross

Webinar #2 in the series features Fr. James Connelly, C.S.C. and his recent work on The History of the Congregation of Holy Cross scheduled published in December 2020 by Notre Dame Press.

Webinar #3: Holy Cross Education in the U.S. and Abroad

December 17, 2020
This webinar features Brother Paul Bednarczyk, C.S.C., Vicar General and First Assistant in the Congregation of Holy Cross, Rome, Italy. Brother Paul shares about the work and ministries of Holy Cross taking place in the 18 countries they serve. This includes parishes, schools, colleges and universities, and social services.

Welcome remarks were provided by St. Edward's University president Dr. George E. Martin, whose vision it was to found the Holy Cross Institute in 2004. Dr. Martin will be retiring at the conclusion of the 2020-21 academic year.  His storied career helped propel St. Edward's University to a place on the U.S. News and World Report Top 10 College or University in the West list, for multiple consecutive years.

Webinar #4: Understanding the Journey of Being a Holy Cross Educator

November 19, 2020, at 3 p.m. CT
Presenters:
Brother Robert Lavelle, C.S.C., Assistant Provincial, C.S.C. Midwest Province;
and a panel of three leaders from Holy Cross schools will share their insights on how Fr. Moreau's vision and the Holy Cross charism is manifested today in our schools.

Sister Ann Lacour, M.S.C., Congregational Leader, Marianites of Holy Cross, shares the history, legacy and continued ministry of the Marianites today, and their special role in continuing the heritage and mission of Holy Cross, as well as insights into how the original sisters developed into three separate groups.

HCI Virtual Convocation 2021 - You Are Invited!

The Holy Cross Institute’s signature event is the annual Convocation which takes place each spring. Going virtual enables many more speakers, more breakout sessions, and participants from around the world.  Replays of some sessions will be available.

A registration and event site is in the works, and a mobile app will also be provide.  Please check back here for additional information in the near future.

Throughout the year, the Holy Cross Institute offers additional programs:

The HCI Executive Director also makes regular visits to school campuses and is available for:

Blessed Basile Moreau, C.S.C., stated that our "union is that great lever in which we can move, direct and sanctify the whole world.”

Moreau embedded the virtues of faith, hope, and zeal in the community he created, a community unique among religious communities of his time and of today. Moreau’s Congregation consisted of priests, brothers, and sisters — clerics and laypeople — and established a tradition of collaboration and mutuality that marks the Congregation and all of its apostolates in a profound way. In any Holy Cross community there is a fundamental, structural need for collaboration among all of its members – its Trustees, its schools and colleges, its departments and faculty, students and staff – a need that creates a familial spirit and unity of purpose that is unmatched elsewhere.

The best known practices of a Holy Cross education stem from a quote by Moreau: “We shall always place education side by side with instruction; the mind will not be cultivated at the expense of the heart.” Thus, a Holy Cross education is about competence in knowledge coupled with highly developed skills that are shaped by the values of the Catholic intellectual tradition, a continuing conversation.

The Constitutions of Holy Cross read: As disciples of Jesus we stand side by side with all people. Like them we are burdened by the same struggles and beset by the same weaknesses; like them we are made new by the same Lord’s love; like them we hope for a world where justice and love prevail. Thus, wherever through its superiors the congregation sends us we go as educators in the faith to those whose lot we share, supporting men and women of grace and goodwill everywhere in their efforts to form communities of the coming kingdom.

Christ was anointed to bring good news to the poor, release for prisoners, sight for the blind, restoration for every broken victim. Our efforts, which are His, reach out to the afflicted and in a preferential way to the poor and the oppressed. We come not just as servants but as their neighbors, to be with them and of them. It is not that we take sides against sinful enemies; before the Lord all of us are sinners and none is an enemy. We stand with the poor and the afflicted because only from there can we appeal as Jesus did for the conversion and the deliverance of all.

The mission is not simple, for the impoverishments we would relieve are not simple. There are networks of privilege, prejudice and power so commonplace that often neither oppressors nor victims are aware of them. We must be aware and also understanding by reason of fellowship with the impoverished and by reason of patient learning. For the kingdom to come in this world, disciples must have the competence to see and the courage to act.

“Hurry then; let us take up this work of resurrection.” —Blessed Basile Moreau, C.S.C.

Fr. Moreau concludes his work on Christian Education with the words above. As Holy Cross educators let us never forget that we are called to be the change that our world so desperately needs. Moreau also quotes the prophet Daniel when talking about the role of Holy Cross educators, “Those who teach justice will shine like the stars in the heavens.”