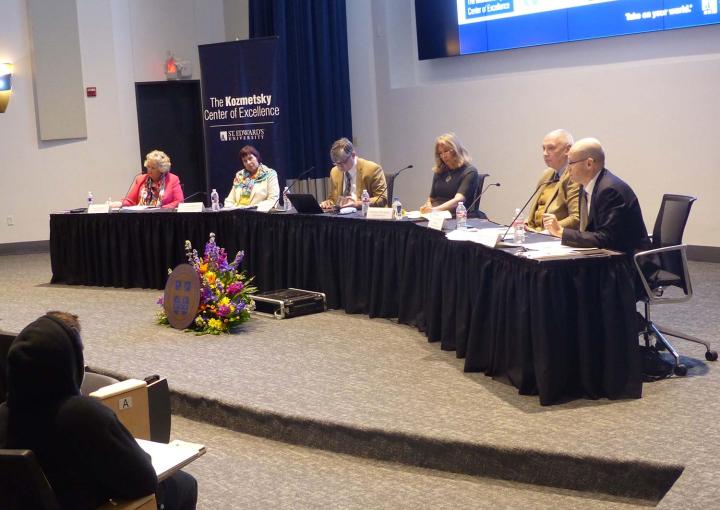 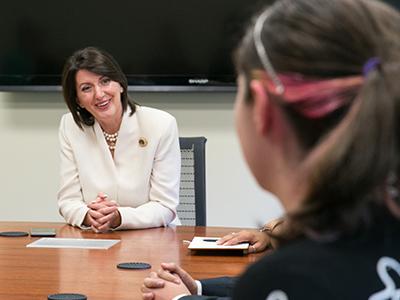 The Kozmetsky Center aims to enrich the intellectual life of St. Edward's University and to serve as a resource for informing the broader public on critical global issues. We facilitate discussions among experts, students, faculty and the broader public in a variety of forums. Past speakers have included American and foreign diplomats, policy makers, university scholars, and leaders of the business, non-profit and cultural communities. We also periodically host short-term resident visiting scholars and practitioners from the United States and around the world to share their expertise and diverse perspectives with the St. Edward’s University community.

The Kozmetsky Center contributes to advancing the mission of St. Edward’s University to educate students from all walks of life and prepare graduates with the tools needed to contribute to a more just world.

The Kozmetsky Center will continue to hold all Spring 2021 programs virtually utilizing ZOOM Webinar and Meeting platforms. Although we look forward to returning to in-person programming hosting our speakers on campus post-pandemic, we are committed during the coming months to strengthening our virtual capabilities allowing for enhanced global expert contributions and international participation in our sessions. We hope to serve as a resource for providing a diversity of local and global academic and professional perspectives and networks in support of the educational experience of St. Edward’s University students during the challenging global pandemic period.

The second session in our series is entitled “COVID-19 Global Pandemic: Comparing Perspectives on National Responses, Geopolitical, Economic & Security Consequences.” These sessions provide contributions from global professionals affiliated with the Kozmetsky Center speakers network to offer country-specific views on the COVID-19 pandemic, including lessons learned and assessments regarding national and world security, economic and societal conditions. 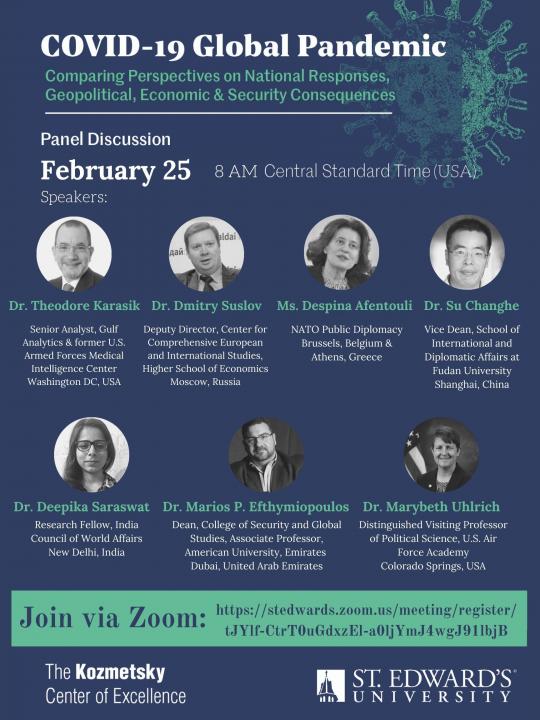 The second session in our series is entitled “ COVID-19 Global Pandemic: Comparing Perspectives on National Responses, Geopolitical, Economic & Security Consequences.” These sessions provide contributions from global professionals affiliated with the Kozmetsky Center speakers network to offer country-specific views on the COVID-19 pandemic, including lessons learned and assessments regarding national and world security, economic and societal conditions.

Impact of COVID19 on Migrant Communities

The Kozmetsky Center is pleased to welcome Dr. Guadalupe Correa-Cabrera to return to speak to the St. Edward’s University community on the topic “Impact of COVID19 on Migrant Communities.” Dr. Guadalupe Correa-Cabrera is Associate Professor at the Schar School of Policy and Government, George Mason University. Her areas of expertise are Mexico-U.S. relations, organized crime, immigration, border security, social movements and human trafficking. Her most recent book is titled Los Zetas Inc.: Criminal Corporations, Energy, and Civil War in Mexico (University of Texas Press, 2017; Spanish version: Planeta, 2018). Professor Correa-Cabrera is co-editor (with Victor Konrad) of the volume titled North American Borders in Comparative Perspective: Re-Bordering Canada, The United States of America and Mexico in the 21st Century (University of Arizona Press, 2020).

Professor Correa-Cabera was the Principal Investigator of a recent research grant to study organized crime and trafficking in persons in Central America and along Mexico’s eastern migration routes, which was supported by the Department of State’s Office to Monitor and Combat Trafficking in Persons. She is currently working on a new book project that analyzes social movements, counterinsurgency tactics and migrant caravans, tentatively titled: The Networks of Mass Migrations, Social Protest and Counterinsurgency: Revising New Social Movement Theories.

Dr. Correa-Cabrera is Global Fellow at the Woodrow Wilson International Center for Scholars, Non-resident Scholar at the Baker Institute’s Center for the United States and Mexico at Rice University and past President of the Association for Borderlands Studies. She holds a PhD, MPhil and MA in political science from The New School for Social Research, and a BA in economics from the Universidad Iberoamericana.

The Kozmetsky Center and the Initiative on Religion, Law and Diplomacy at the Fletcher School of Law and Diplomacy at Tufts University will provide an update on our “Religion-Policy/Security Nexus” multi-year project and will futher discuss “Exploring Religion and Violent Extremism Across Comparative National Contexts:  Motivation, Distortion and Exploitation?” Panelists will share research perspectives and findings on the ways in which texts and teachings of major religious traditions (Islam, Christianity, Buddhism and others) are distorted and exploited to justify extremist political violence. Invited speakers include:

Professor Matthew Feldman, Director Center for the Analysis of the Radical Right, The American University, London.

Dr. Elizabeth Prodromou, Fletcher School of Law and Diplomacy, Tufts University, will join us as co-moderator for the session.

We will host our alumni round-table with Mr. Carlos Balderas ’02, a graduate in Humanities/Communication. Balderas, an Austin native, currently serves as Global Supply Manager for Tesla (Austin) and was previously HUB Program Manager for the Texas Department of Transportation where he was involved in coordinating contracts with Spain and other international partners in support of transportation development in Texas. Balderas will share his perspective with students at St. Edward’s on the importance of developing a diverse internship portfolio in preparing for professional careers in the Austin area and beyond that involve global partners and opportunities.

Ambassador Chapman originally came to Brazil in 1974 when his father’s U.S. company transferred the family to Sao Paulo. He attended Escola Maria Imaculada (Chapel School) where he graduated in 1980. Before joining the Foreign Service, he worked as a commercial banker in New York and Saudi Arabia, and later as a business consultant in Brazil and his hometown of Houston, Texas.

The Kozmetsky Center will host another three-nation student international seminar session in our series devoted to contemporary global issues. The session will be include St. Edward’s University, the Moscow State Institute of International Relations of the Ministry of Foreign Affairs of the Russian Federation (MGIMO) and Friedrich Schiller University in Jena Germany.

For the April 20 session, students of the three universities will gather via ZOOM Webinar for the Austin, USA—Moscow, Russia–Jena, Germany discussion on the recent book What is at Stake Now by former President of the U.S.S.R. Mikhail Gorbachev which focuses on major global challenges affecting all nations, including global warming, wealth inequality, media and information, populist nationalism and more. Students of the three universities are invited to attend the ZOOM Webinar and offer questions and comments for the student panel speakers representing the universities.

We will continue to offer the Council on Foreign Relations (CFR) lecture series during the Spring 2021 semester. The CFR Webinars provide an excellent opportunity for students to engage with subject matter experts as well as to hear perspectives of university student colleagues throughout the nation and world community. The Spring 2021 CFR announcement is attached along with instructions to register for the ZOOM sessions.

This series features short, policy-relevant articles prepared by our U.S. and international speakers based on contributions to St. Edward’s University campus programs. The articles provide a resource for students, academic research, and the policy, private sector and civic communities. Learn more: https://kozmetskycenter.org/briefings/

In addition to our programs, information on virtual global internships, study and seminar opportunities will be posted at the Kozmetsky Center website throughout the academic year.

The Kozmetsky Center looks forward to continuing to support the St. Edward’s University community during this unprecedented period for our campus, the nation and broader global society.