These alumni were recognized for their accomplishments during Homecoming & Family Weekend alongside Athletics Hall of Fame Inductees. 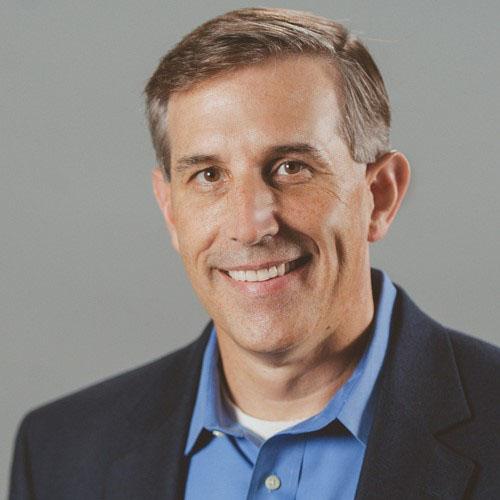 Paul Gerling MBA ’98 deftly used his graduate education at St. Edward’s to forge a career path that now finds him as a senior leader for Comerica Bank. He gives back to today’s Hilltoppers as an adjunct professor, member of The Bill Munday School of Business Advisory Board, and frequent volunteer. He is the 2018 Distinguished Alumni Award recipient, and a model of meaningful success for future generations.

Paul says, “At first, St. Ed’s was just a convenient place to earn an MBA. However, the experience was made so great by both professors and students.  We had a lot of engineers and other professionals in the program who worked at Motorola, 3M, and other industry leaders. They brought a wealth of expertise that broadened our perspective. And professors used a great mix of theory and practice.”

A key element of Paul’s experience – and a turning point for his professional development – was the book Marketing Warfare, which enlightened him about new ways to think creatively and strategically about business and competition. “It taught me to think about possible solutions instead of obvious barriers. This led me into the technology finance industry, where I have benefited greatly from people who are willing to help broaden my perspective and deepen my skill-set.”

Gerling has worked hard for all of his achievements, yet he is quick to acknowledge that many within his circle have provided life-changing support and encouragement – especially his partner in life, Amy, and his family. “I know I made at least one good decision when I married Amy. I am so grateful for the health and happiness of my wife and our sons Thomas and John, who inspire me every day to be a better person,” he says. “My parents, in-laws, siblings and other ‘chosen family’ have supported me through a lot of good and bad. I would be nothing if not for their support and guidance.”

Paul’s position as Senior Vice President and Group Manager for Central Texas Commercial Banking at Comerica has now given him the expertise and leadership skills that he so valued from his professors and peers while he was a graduate student more than twenty years ago. He also gives equal credit to his life experiences for helping him to fulfill his potential. “I really just want to be the best person I can be and give back more than I received,” he says.

“My parents demonstrated this to me first-hand. My wife continues to reinforce this message every day through her actions and her kindness. Involvements in organizations like Boy Scouts (both as a scout and an adult leader) have helped inspire purpose in my life because of the people involved and their passion for excellence. In the end, both career path and life purpose are intertwined. Inspiration comes from those around us, and I have been incredibly fortunate to have known some of the best.”

As St. Edward’s University honors Paul’s life and career achievements with the 2018 Distinguished Alumni Award, we also thank him for being a role model for every member of the Hilltop family. 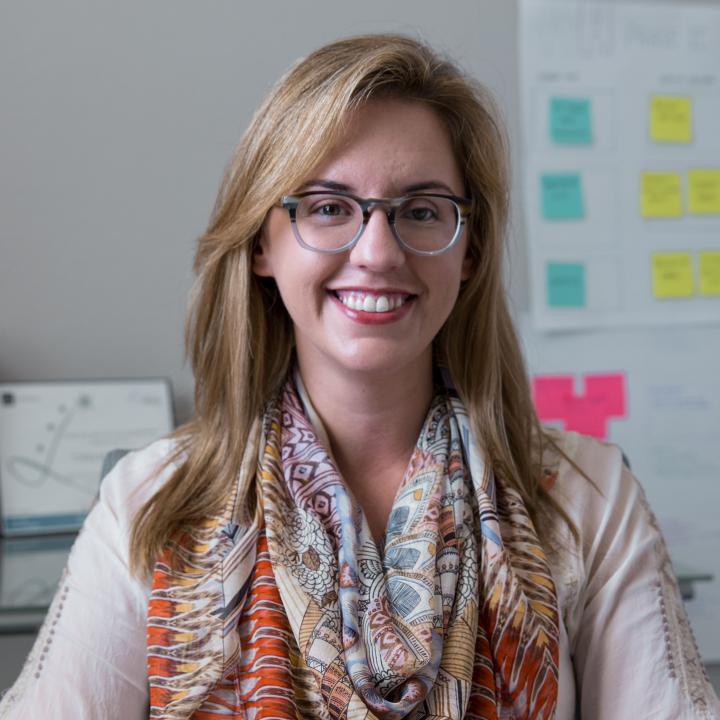 Chelsea Elliott ’12 has earned the 2018 Alumni Achievement Award just six short years after her graduation from St. Edward’s University due to her incredible accomplishments and contributions to the community.

“I started a nonprofit organization to identify and support children with vision and hearing impairments through access to advanced screening technology. I was able to express my care by rallying resources, overcoming obstacles, and meeting people’s needs. I hope to be remembered as a formidable woman who embraced the challenge to take on her world,” she says.

Chelsea’s nonprofit, the half Helen Foundation (hH), has rightly garnered praise from both the public who benefit from advanced screenings, volunteers and teachers who learn to administer the screenings, and legislators and influencers who help put the foundation’s mission to work in local communities.

For example, in Maui, Chelsea says that school-based vision and hearing screenings were basically extinct, except for a few schools where Lions Clubs volunteers conducted them. She flew there to help give children better access to vision and hearing tests. “However, to proceed with any services on the island,” she said, “I had to get the blessing of Lions Club volunteer Leo Polo, who met our proposal with distrust, hesitation and skepticism.”

The St. Edward’s tradition of meeting people where they are is perfectly demonstrated by Chelsea’s approach to the challenge. She says, “I was committed to winning Leo over with kindness and perseverance. I showed up for every screening, trained every Lion on how to use the equipment, and joined them for coffee and discussion afterward. Over time, Leo transformed from a distrusting adversary, to a true champion for hH’s mission. The program we proposed is still in full force in Maui because we were able to influence the minds and attitudes of those who resisted change.”

Elliott’s upbringing has a lot to do with her spirit and determination. “My earliest memories are of my mom praying,” she says. “Praying that I find a way to turn my personal vision and hearing loss into a way to help others and to heal my soul.” When Chelsea enrolled at St. Edward’s, she intended to become a film producer, “until I met Dr. Stephanie Poole-Martinez my junior year.”

Chelsea’s life was transformed when Dr. Martinez encouraged her to write her life’s story down. “She pushed me, with every round of revisions, to feel the hurt I lived when my eye was removed at fifteen years old. That assignment was a turning point for me as a young woman and future leader.” Both Dr. Martinez and her mother remain pivotal to her journey, but especially her mother. “My mom grabbed the torch and has been my right-hand, mentor, and voice of reason in establishing, building and growing half Helen Foundation.”

While Chelsea gives back to the world around her every day, she is also a volunteer for the Austin Alumni Chapter and an advocate for the Holy Cross mission and vision of an improved world through education. When asked about advice for future students, Chelsea shares, “Care. Make time to discover what you truly, deeply, and sincerely care about. Dr. Zanardi taught me that care is the mother of all things, and our motivation for taking action.” 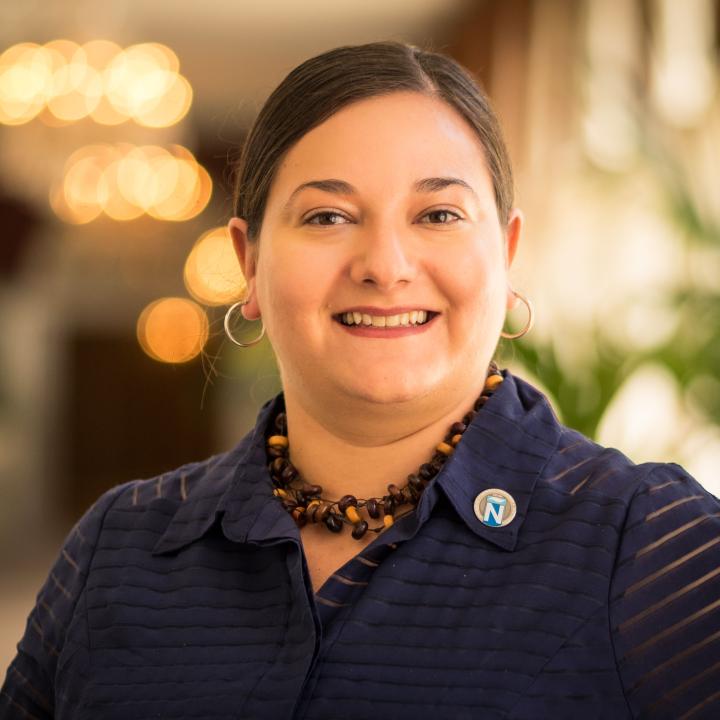 Nancy Flores ’03 believes that her awareness of social justice began at St. Edward’s in many ways. “But,” she says, “My commitment to it has continued long after leaving the Hilltop.” She is the perfect recipient of the 2018 Alumni Service Award. Flores says, “I hope that my service to others – from leading in the community, to mentoring the next generation – reminds people to pay it forward themselves.”

Nancy works as a community affairs reporter for the Austin American-Statesman, a job through which she is able to spotlight stories of underrepresented persons and communities. For example, she recently profiled a low-income, widowed father of four. Her work inspired Austin citizens to donate enough money to move the family into safe housing.

She developed deep proficiency in storytelling, and an uncanny ability to connect with others, as a Hilltopper. “I served as Editor-in-Chief of the Hilltop Views, President of the Communication Society, member of the University Programming Board, Rotaract Club, MECha, and I served in AmeriCorps Community Mentor Program, among other student organizations,” she says.

Nancy first came to St. Edward’s through the College Assistance Migrant Program (CAMP), which provides educational opportunity to students who come from migrant farmworking backgrounds. Her connection to CAMPers is a direct result of her own coming-of-age in a border town. “I’m the daughter of Mexican immigrants, and everything about my identity is marked by the fact that I grew up in a Texas border town,” she says. “My life has been braided with cultural strands that are impossible to untangle, something that gives me a unique vision and approach to everything that I do. Every day I’m inspired by the sacrifices my parents made to leave their home country to create a better future for me and my sisters.”

The inspiration Nancy describes is clearly a driving force in her own volunteerism and advocacy. Since 2012, she has served as President of the CAMP Alumni Association, an affinity group that began after CAMP alumni united to ensure that St. Edward’s CAMPers would continue to receive social, professional, and personal support long after graduation. The CAMP Alumni Association represents more than 2,500 CAMP alumni across the country. Under Nancy’s leadership, it hosts networking, social and community service events. Through events like CAMP Career Day, it is also dedicated to serving current CAMPers.

While Nancy’s life work seeks to end long-standing issues of prejudice and inequity, it is still accurate to call her a pioneer in her own right. She recalls a victory in her fight for Latinx visibility while at St. Edward’s: as a member of the University Programming Board (UPB), she recommended hiring a social justice activist to speak on campus.

Raul Salinas was not a household name for many of her classmates, but Nancy knew that his positions on prisoner-rights -- along with his contributions to Chicano literature -- would bring an undeniable, transformative perspective to the Hilltop campus. “I knew that if I could just get students in the same room with him, they’d be blown away,” she says. “I managed to convince the UPB that he’d not only be a big draw, but one of our biggest author draws of the semester.”

Nancy’s work with faculty and peers created the momentum needed to turn his appearance into a huge success. She says, “This is an important memory. It taught me many lessons that I’d apply later in my professional life – pitching ideas that are important, even if others are dubious. I learned about tenacity, encouraging diversity, and asking for help.” Most importantly, Nancy learned, “to not be afraid of being a trailblazer, no matter how exhausting it may seem.”

And so the 2018 Alumni Service Award will go to a true trailblazer, Nancy Flores ’03. Forever in the university’s record, her legacy will stand as a beacon to others. She hopes future Hilltoppers will remember some key words of advice that she herself received: “Think with the end in mind. Think about what you are striving for, and make an early plan on how to make it happen.” Nancy hopes others will be inspired, as she was, to be bold.