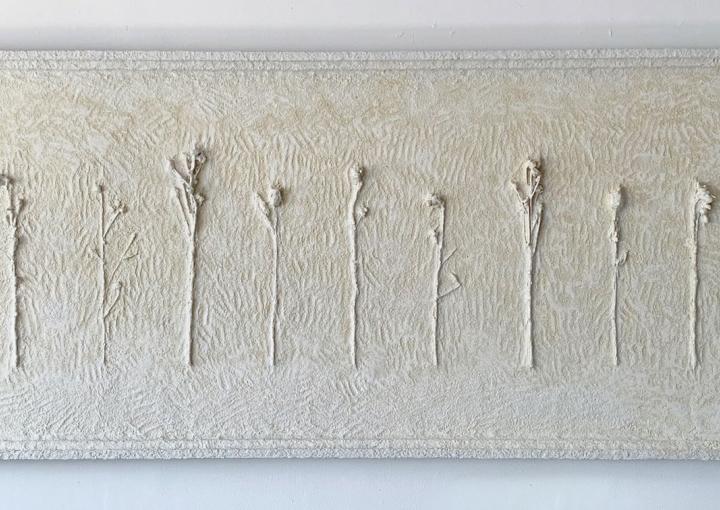 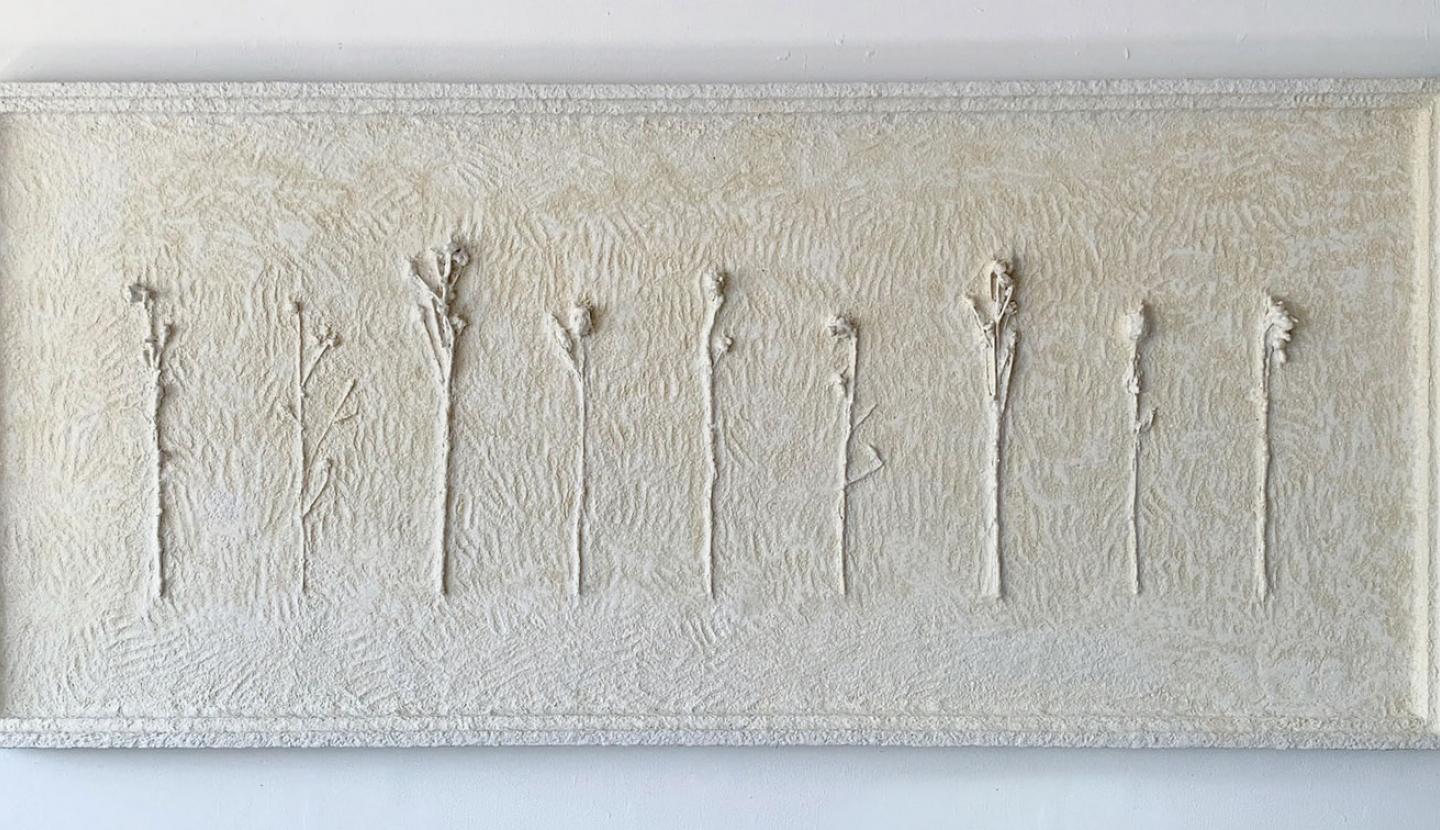 These seven artists attended St. Edward’s across nearly 40 years. They work in different mediums, yet their art is powered by the same deeply human desires: to understand themselves and others, and to leave the world a little bit better than they found it. 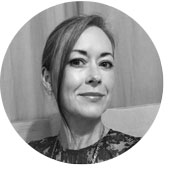 My paintings have a contemplative, pulsating sense of navigating inward — an intentional effect derived from my observations. Focus transitions toward a central beacon of light, and a hypnotic shift follows. As a result, what once seemed an unyielding sense of chaos becomes sculpted into a codified geometric harmony, ushering in a deeper, more insightful space of healing.

Sarah Ferguson ’98 views art as a guiding light for personal reflection and philosophical exploration. Her passion for color was ignited when she studied color theory in Professor Walle Conoly’s design class in the late 1990s. Her series of paintings, Cynosures, embraces the power of color: A cynosure is something that aids in direction or guidance, while itself demanding attention.

Completing each painting takes up to two weeks of meticulous work as she strives for equilibrium between the oppositional forces of rigid geometry and free-flowing color exploration.

Ferguson hopes her paintings invite the viewer into a meditative space, leaving open the possibility to experience one’s own awakening amid all the color and energy. 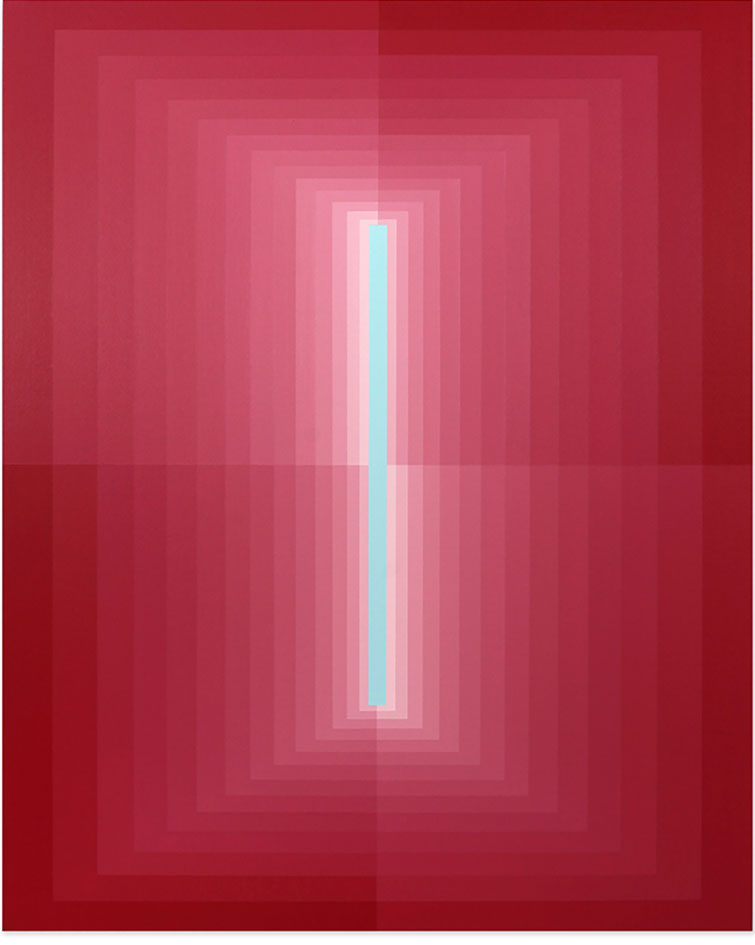 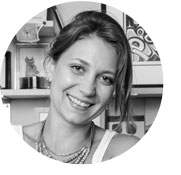 Ever since I first looked at E. coli under a microscope, I’ve been fascinated by its beauty. In my paintings, I strive to create compositions that replicate the tension between patterns found in nature and the human interpretations of those patterns. Also present in my work are issues of social justice. The viral and bacterial forms that cause foodborne and waterborne illnesses may be gorgeously arranged, but they also underline how important the human right to clean water is. While E. coli may be inconveniently hiding in your package of Whole Foods spinach, there are still many communities throughout the world without access to clean water for drinking, food preparation and sanitation. I hope that my work can help to shed a light on the need for change.

Jessica Foster ’15 will tell you without reservation that she has her dream job as an art teacher at Barbara Jordan Elementary School in northeast Austin. That’s true even during the Covid-19 pandemic, when she is teaching art remotely to seven classes per day. Some of her students are learning from home, while others are in school. Kids in class can no longer share crayons and markers, and some students learning from home have no art supplies of their own.

So Foster approached three Austin nonprofits to provide funding for a box of personal art supplies for all 600 children at her elementary school. She also won a $6,000 grant this year to create a public art space for her students and her community. Working with the artist support organization SprATX Ignite, she commissioned four local artists to paint colorful murals on the walls of her school. The goal is to break down barriers between students and art and encourage them to explore their own artistic talents. The murals were unveiled in October 2020, in time for families to admire them as they drove through the art supply pick-up station.

“Kids right now are craving the socialization that comes through art,” Foster says. “I’m honored to be able to provide that.” 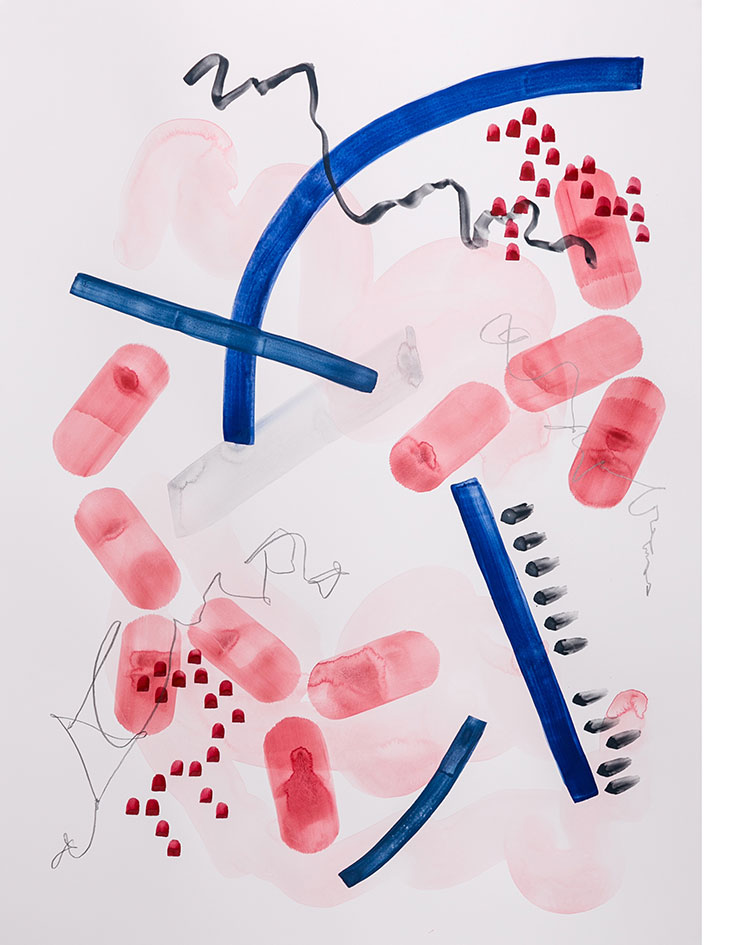 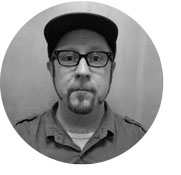 In October 1994, U.S. News & World Report revealed that South Boston, Massachusetts, had the highest concentration of impoverished whites in America. As I researched the area’s history, I found that this closed, blue-collar community still lived in the shadows of the 1970s race riots it endured when the United States government tried to integrate South Boston schools. South Boston was labeled a place that did not take well to outsiders.

As I started photographing, I found that South Boston developed its own identity in its time in exile. The individuals living there turned to the community itself for strength. In the process, they developed a sense of identity and pride that seems to be their own.

My photographic process has always been about documenting people and place to create records of the ordinary and, through that process, finding poetry within the mundane. Creating large-scale panoramic photographs allows me to simultaneously show details and relationships at multiple spatial and perceptual levels.

Dylan Vitone ’01 goes where the work is. As a documentary photographer, he has traveled to Boston, rural Louisiana, Pittsburgh, Miami and Qatar to understand people who are different from himself and learn about the social issues they face. And this year, his work is going to the moon: MoonArk, a conceptual art piece he developed in collaboration with faculty colleagues from Carnegie Mellon University, where he is an associate professor, and James Madison University, will be delivered to the surface of the moon by lunar rover. It will be a cultural mini-museum, left as a gift for future explorers.

But no matter how far he wanders, he stays connected to St. Edward’s. He met his wife, Elaine (Garrison) Vitone ’00, while a student. His father, Joe Vitone, teaches photography in the School of Arts and Humanities. And he credits his professors for making him believe that he could — and should — have an impact in the world. 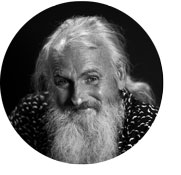 My work is inspired by my travels and the religious paintings in European chapels. I employ gold leaf and egg tempera, classic methods that date back to Byzantine iconographers, to create paintings of biblical characters and scenes that resemble early Renaissance portraits. My work builds on Eurocentric biblical iconography, centering diverse subjects in holy imagery to find deep and lasting value from then until now.

John Cobb ’83 attended St. Edward’s in the early 1980s when Holy Cross Brothers were prevalent on campus. He quietly describes them as important figures in his spiritual development and artistic growth. Several of the brothers served as subjects for his paintings.

His art rewards the patient viewer. In the tradition of medieval artists, his paintings often depict religious themes or Bible stories. But his subjects are very much of this time and place — a janitor he once worked with at the Texas Department of Public Safety, a carpenter, a homeless family on a Texas beach, a disabled relative. Cobb paints them all with care and reverence, a subtle instruction to look for the divine in our fellow humans.

Using centuries-old techniques, he renders his subjects in earthy egg tempera paint and luminous gold leaf. Because Cobb paints in layers, each work can take two to three years to complete, and the end result resembles an icon or fresco that has existed for centuries. 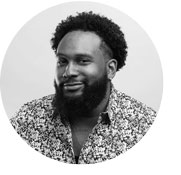 My artwork highlights the beauty of people from different ethnic backgrounds through individualized portraiture. While I attempt to cover cultures from all over the world, I focus most on those of minorities in North America. Some will say that my artwork has political messages behind the visuals. This is both true and false. While my artwork is not associated with any political party, it will always promote equality and give voice to the voiceless. I believe that everyone, regardless of their ethnic background, is born with royal value and should be treated equally.

When Jeff Miles Jr. ’15 moved from Washington, D.C., to Austin to attend St. Edward’s, it was the first time in his life he felt like a minority.

He had left a predominantly African American city and high school to come to Austin, where Black male representation is in the single digits. His professors and family — along with his experiences being an African American in Texas — challenged him to grow and experiment with his art. He discovered that his voice mattered and that art was his platform for expression.

The four portraits he painted for his 2015 Senior Show got noticed and were booked into an art display at the Austin airport. Then came an invitation to exhibit during the East Austin Studio Tour. In June 2020, he was invited by Capitol View Arts to join other artists in painting “Black Austin Matters” on Congress Avenue downtown and a mural of George Floyd on East 11th Street.

“These movements are not about valuing one over another but about respect for all,” Miles says. “They are saying allow me to matter.” 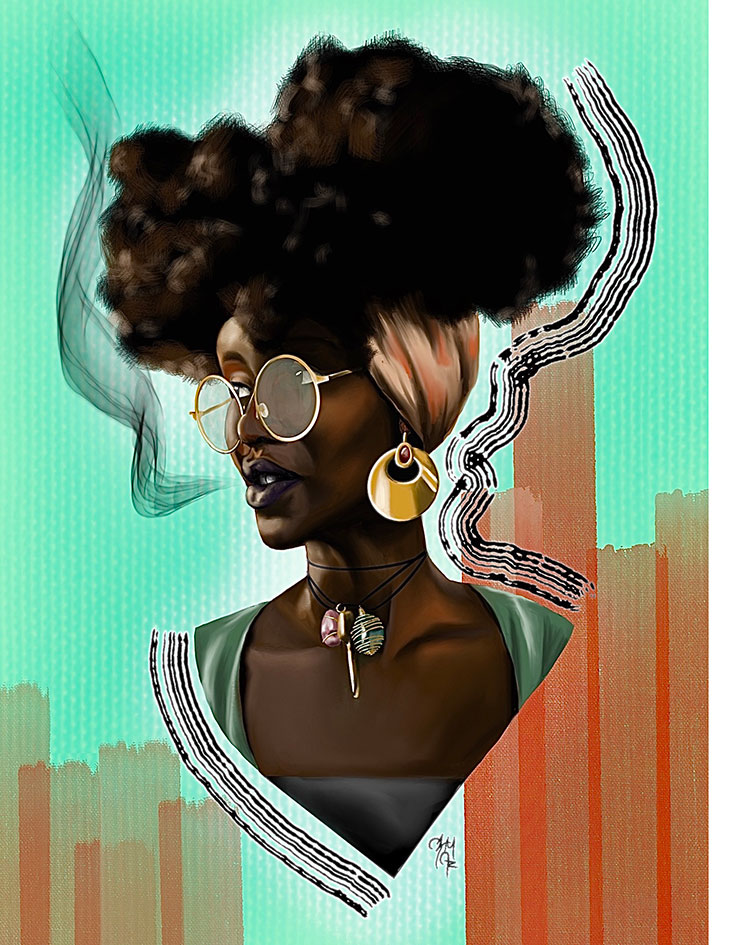 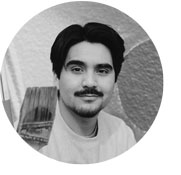 Every piece begins with an idea or feeling. No matter the medium, I find myself caught in nepantla, a place of in-between-ness, the institutional and cultural burden of feeling too Mexican for America, and too American for Mexico. Sometimes I wrestle this feeling, sometimes I welcome it. The quality of my experience as a brown body in America fluctuates. Every moment, mundane or commemorative, influences whether I feel spirited or othered. My work explores both extremes of this experience, celebration and alienation.

Gerardo Silguero ’16, who grew up in Brownsville, uses his art to explore his experience of being in between two cultures. But he is not in the middle ground when it comes to social issues that affect Latinos. Through sculpture, painting, printmaking, installation and murals, he reminds viewers that hundreds of immigrant children have been detained at the U.S.–Mexico border, separated from their parents and housed in harsh and frigid conditions.

In the midst of the Covid-19 pandemic, as art events and exhibitions mostly ceased, Silguero turned his attention to essential workers. His latest art is a series of boldly colored portraits of friends and family members who continued to work through lockdown in jobs at grocery stores, city offices and construction sites. His aim is to make these people visible and ensure they are regarded as the everyday heroes he sees them to be. 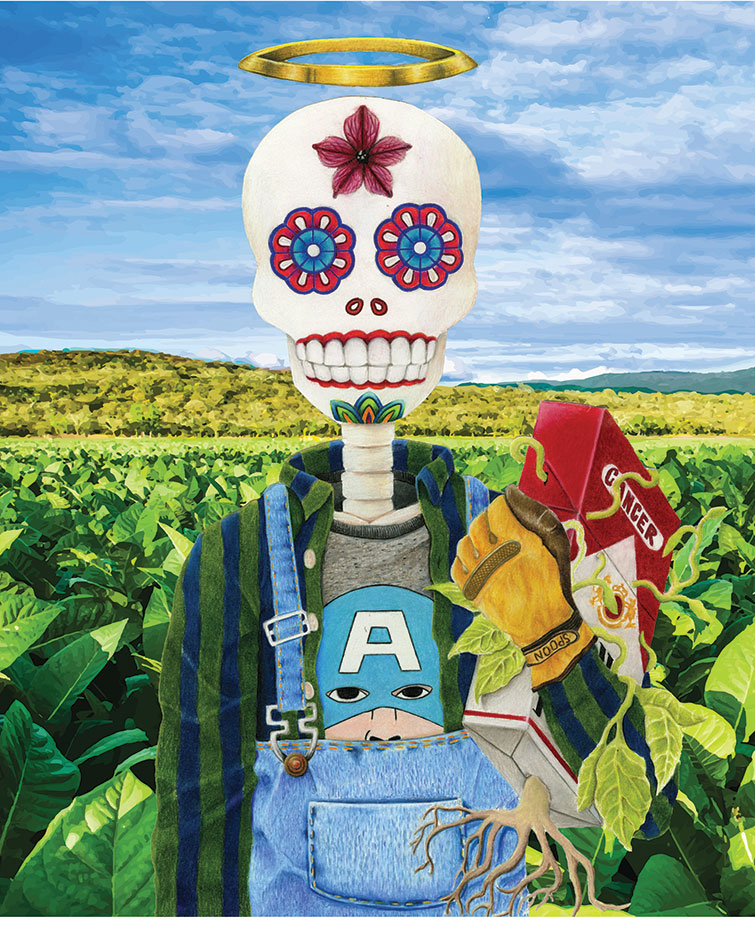 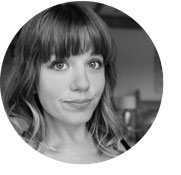 I collect personal artifacts that have embedded histories of trauma. Sheets from a rape victim, prison uniforms that have been worn down or military gear that has seen more than battle. Once I receive the objects, I have only one rule: to transform them. They become wall hangings, installations and sculptures, thus allowing the matter itself a voice in art. Pretty portrait or not, I believe we each exist more honestly in our own raw materials. When I can make beauty out of these materials, these raw pieces, I find it to be the fuel to keep making. 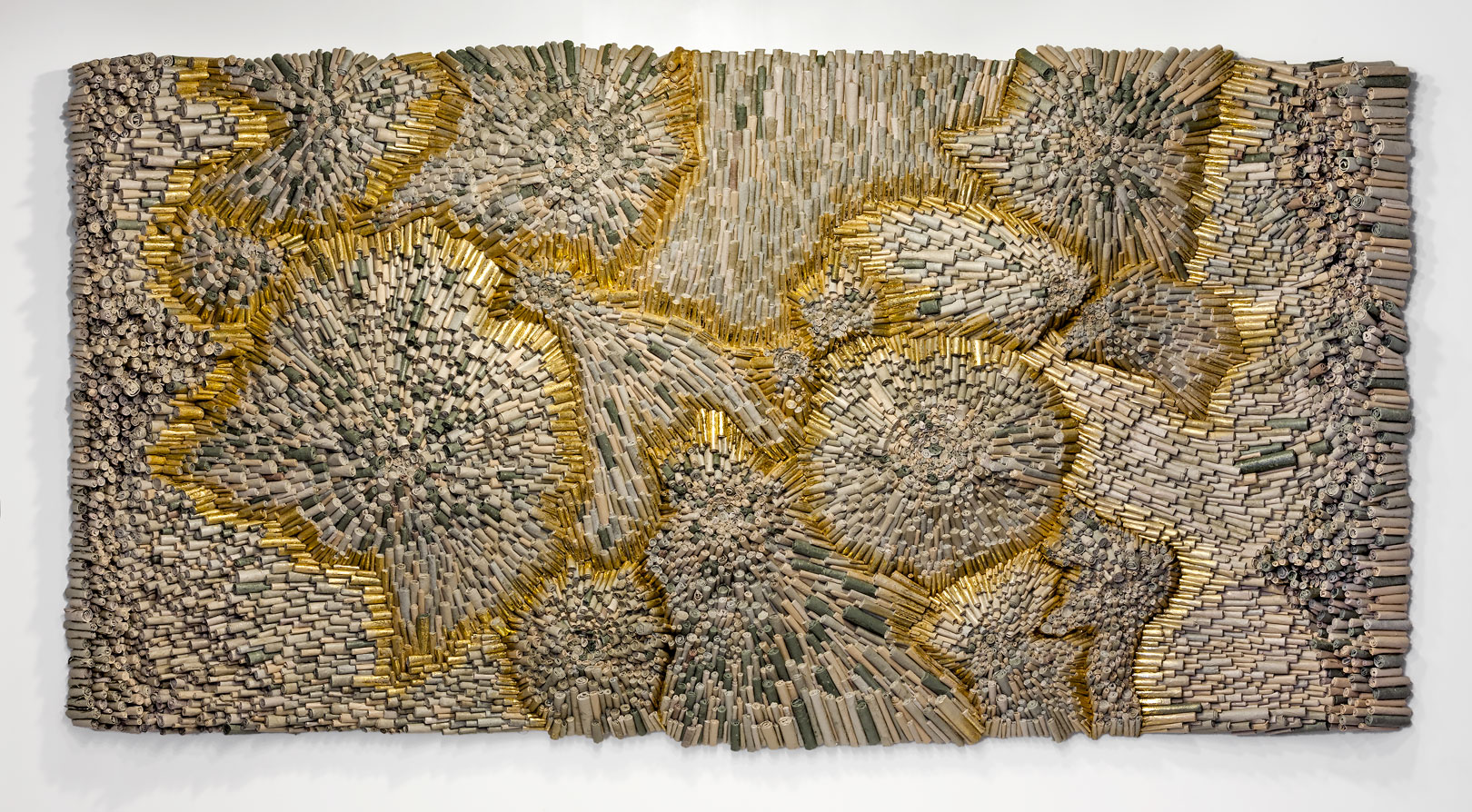 Jenn Hassin ’12 works in ceramics, drawing, painting, collage, performance and installation. In many cases, the medium itself morphs and defies definition as she transforms one object into another. Clothing becomes paper. A dress becomes a sculpture. Porcelain preserves a flower. Her enduring interest is in transforming relics of trauma into objects of beauty, education and contemplation.

In 2015, she created a large-scale rolled-paper work titled “A Battle Lost” to draw attention to the issue of suicide among military veterans. The 8,030 paper spirals signify the birth-to-death cycle of the veterans who lost their lives to suicide in the previous year. She added gold foil to the composition in the tradition of Kintsugi, a Japanese technique of mending and strengthening broken pottery. The art has traveled to exhibitions across the country and currently hangs at the U.S. Military Academy at West Point, New York.

Hassin also involves the community in making her art. She has invited students, veterans, sexual assault survivors and others to contribute to her process. She has returned to the St. Edward’s campus several times since her 2012 graduation, working with students around themes including mass incarceration and the struggle for national unity.

One of her latest and most visible transformations took place in the digital realm. On Veterans Day 2020, her rolled-paper sculpture made from military uniforms of all five branches of the armed services appeared as the Google Doodle on screens across the country.

Opening artwork by Jenn Hassin, photographed by Chris Gray. Respect / 2019 / Glazed porcelain cast long-stemmed flowers embedded in pulp made from sheets on which a close friend was raped, mounted on a cradled frame.