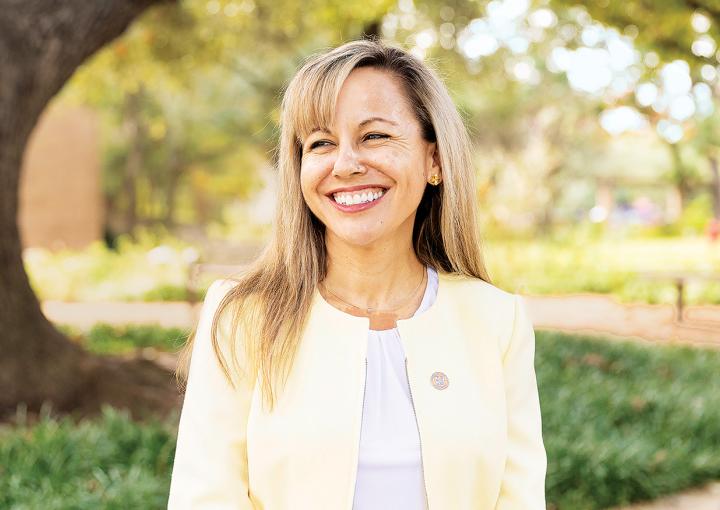 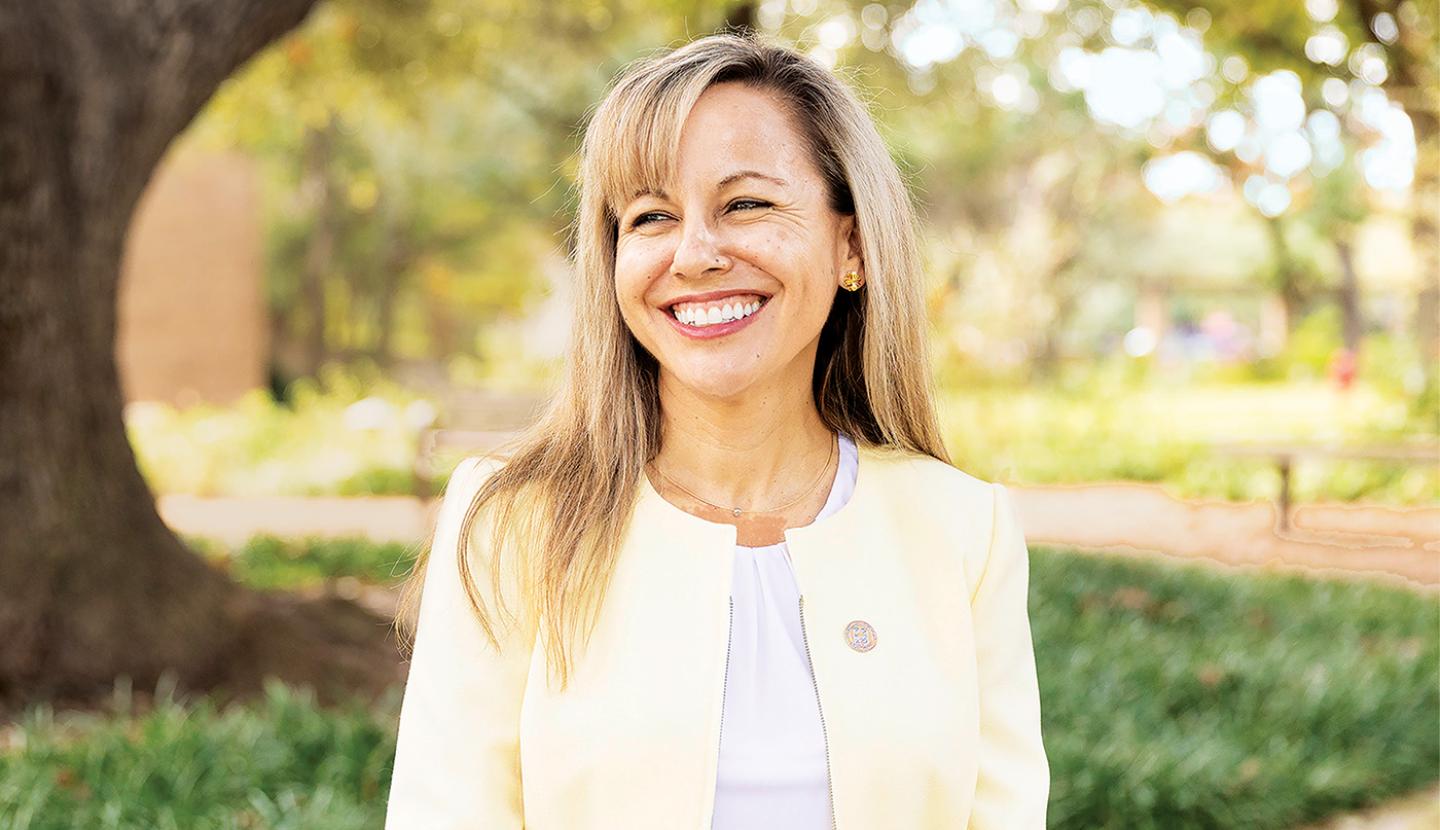 Montse Fuentes became a professor to help students like herself achieve dreams they hadn’t thought possible. Now, as president of St. Edward’s, she’s paving the path forward for the university.

Montserrat “Montse” Fuentes has spent her life as a newcomer. As a child, she moved frequently for her father’s military assignments; her academic career has led her from her home country of Spain to several different regions of the United States. Her experiences as a first-generation college student, an immigrant, a woman in a male-dominated field and a working parent have given her a deep empathy for those who lack a sense of belonging. As the new president of St. Edward’s, she has set the university on a journey to greater distinction that is inclusive of all.

Fuentes was born in Oviedo, Asturias, a lush, mountainous region near Spain’s northern coast. Although her family moved every two or three years, Fuentes consistently attended Catholic schools, reinforcing the commitment to service and community that her parents and parish churches had instilled in her.

Because neither of her parents went to college, Fuentes was determined to pursue higher education. She enrolled at the University of Valladolid, a public research university established in the 13th century. Torn between her loves for music — particularly piano — and mathematics, she decided to major in both. Fuentes sometimes struggled to navigate the unfamiliar higher education system, but faculty mentors nudged her toward life-changing opportunities to intern, conduct research and study abroad.

“I didn’t set out to pursue those opportunities, but they were presented to me because I had people who truly believed in me and cared about me,” she says. Years later, as a professor and dean, she offered the same confidence-building mentorship to her own students. 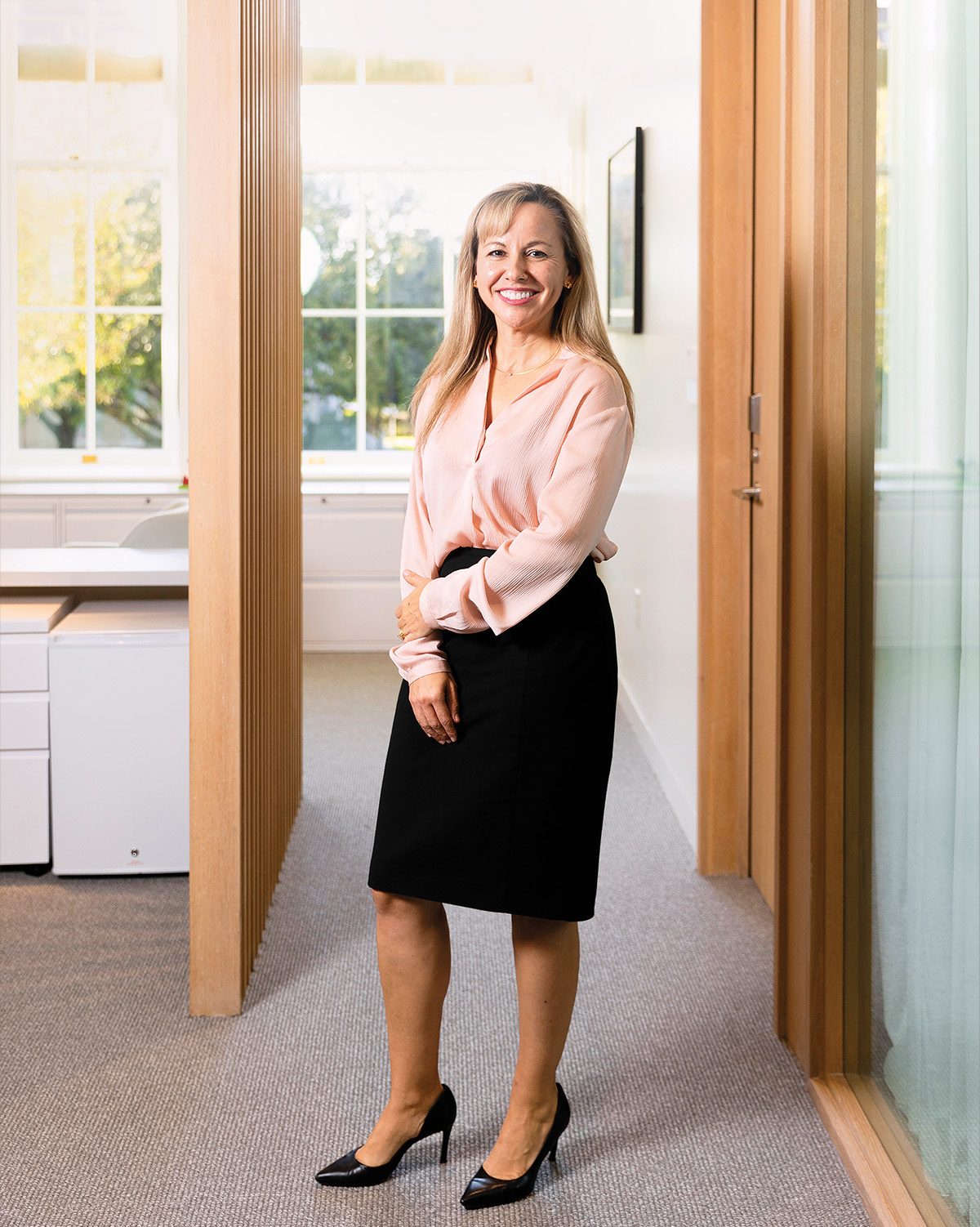 While studying abroad in Italy, Fuentes met visiting faculty from the University of Chicago’s department of statistics who recruited her to their graduate program. The experience set the direction for her life in multiple ways: Her second week in the United States, Fuentes met a man named Tom Patterson, who later became her husband.

After earning her doctorate, she started teaching statistics at North Carolina State University, where she rose to full professor and served as department head. Along the way, she had a daughter and two sons. The challenges of balancing an academic career with parenting three young children galvanized her to advocate successfully for parental leave. “One of the accomplishments I’ve always been proud of is my commitment to making work and family life more compatible,” she says. “One of the reasons I decided to pursue academic leadership opportunities was to make it easier for others in the future.” In 2013, North Carolina State recognized her with its Equity for Women award.

Fuentes went on to serve as dean of the College of Humanities and Sciences at Virginia Commonwealth University, a 30,000-student public university in Richmond, and as executive vice president and provost at the University of Iowa. She also led the research network for Statistical Methods for Atmospheric and Oceanic Sciences, or STATMOS, a group of scholars leveraging statistics in service of climate science. Fuentes’ own research focuses on the environment, climate change and air quality, and the impact of environmental problems on human health and pregnancy outcomes.

Fuentes became president of St. Edward’s in July 2021.After her years at large, public universities, she has embraced the chance to join a more intimate, mission-driven community. The mission of St. Edward’s aligns with her own priorities: inclusion, hope, creating supportive relationships and promoting justice and equity. Fuentes is building on the work of her predecessors to position St. Edward’s as a destination university: one that offers a premier education grounded in social justice, and one where all students are connected with high-impact opportunities such as research, internships and study abroad. In addition to serving as president, she is a professor of mathematics and will teach statistics. She also will continue her research with the support of a grant from the National Institutes of Health.

I didn’t set out to pursue those opportunities, but they were presented to me because I had people who truly believed in me and cared about me.

When she’s not working, Fuentes spends time with her husband and two sons — her daughter is a sophomore in college — and plays the piano. Fuentes is a distance runner and plans to join a running club and train for a marathon. For now, she recharges by running in the park near her house and doing yoga and Pilates. Austin, she says, felt like home almost immediately because of its sizable Hispanic community and because its emphasis on being a green city reminds her of where she grew up. St. Edward’s, too, was a natural fit because of its student focus and its compatibility with her values.

“At other institutions, in other states, the first question I’ve always gotten is, ‘Where are you from?’” she says. “I always have to overcome the sense that I don’t belong because clearly I’m not from that place. St. Edward’s is the first time I haven’t even gotten that question once. What people ask me is, ‘Why are you here?’ That tells me we’re here for the same reason: because we truly believe in the mission and values of the institution. It feels like this is where I belong.”

The Making of a President

Wisdom from her father
Being an expatriate and always being new to a school or community — not having a sense of belonging — has been challenging at times. But I draw on something my dad taught me when I was a child and we were moving because of his military service. He always said, “Learn to adapt without losing yourself, and make sure you’re able to lead an authentic life.” I always try to listen and learn about the community while staying in touch with my core values.

On majoring in music and math
Music has always been my passion and how I express myself. But the logic in math helped me make sense of the world around me. So I pursued both subjects. They may be perceived as an odd couple, but they really come together in a very natural manner. Music is all about harmonies, and the harmonic series is a mathematics formula. You need fractions to understand it, to be able to hold very precisely to notes. There is actually a lot of math in music. 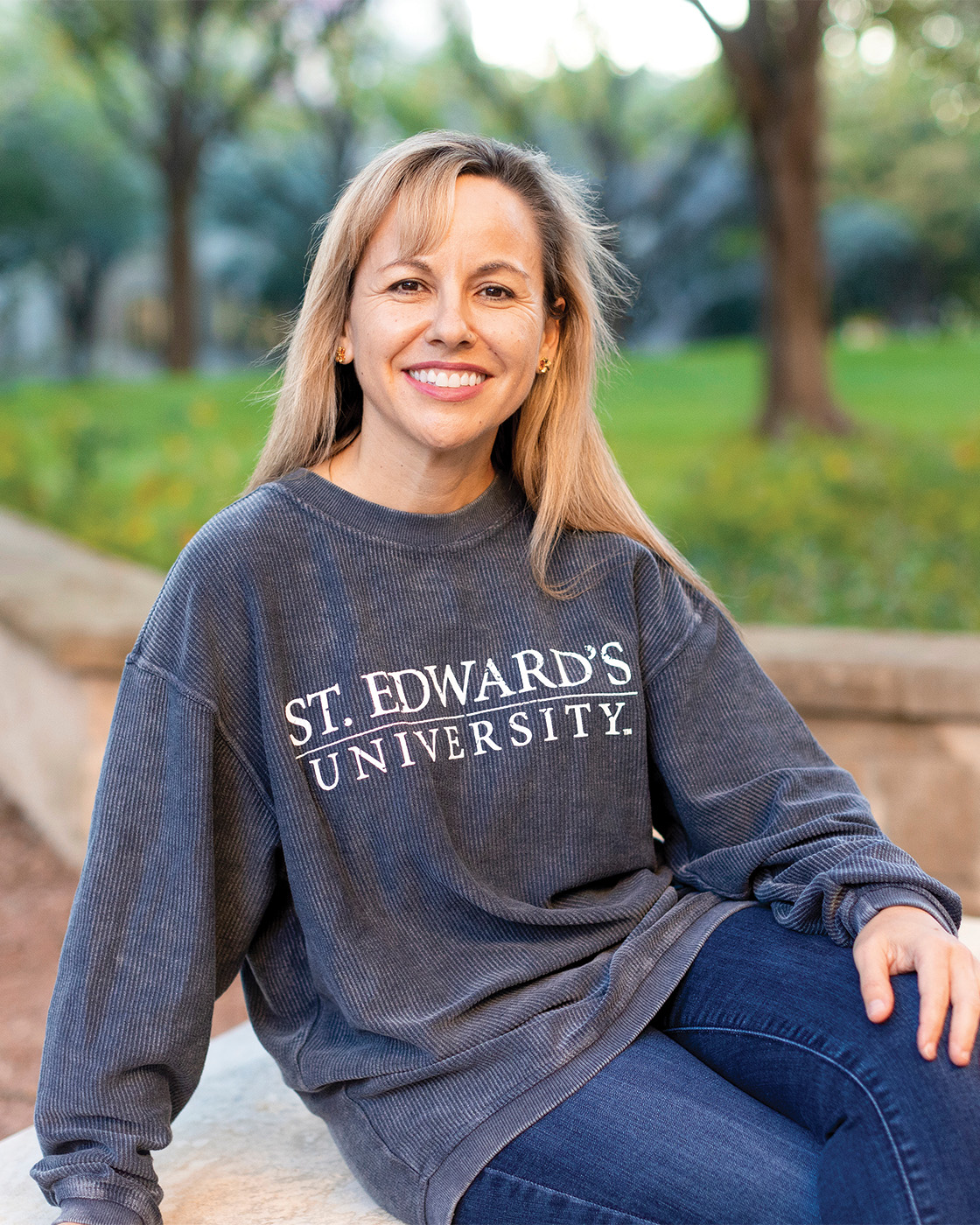 On paying it forward
When I graduated from the University of Chicago and had great career opportunities in front of me, I asked my mentor, Michael Stein, what I could do to express gratitude for everything he did for me. He told me, “Just go and do for others what you think I have done for you.” Since then, I’ve been trying to be the type of mentor that he was for me.

What's on Her Bookshelf

Why she plays the piano after a long day at work
Music is still a very important part of who I am, even if I don’t play professionally. It’s therapy: It helps me focus, manage my emotions, channel my creativity and find balance. My favorite music comes from the 19th-century Romantic era, which encourages emotional expression: Schumann, Schubert, Mendelssohn and my favorite composer, Chopin. My favorite piece to play is Chopin’s “Fantaisie-Impromptu.”

How earning two degrees prepared her for being a university president
I’m very organized and strategic with my time, and that’s a skill I developed when I was a double major. It was not easy to be studying two completely different fields, and on top of that, I had to practice the piano every day for three hours. So I had to figure out the best time of the day for me to do different activities, and that has served me well for the rest of my life. For instance, it required a lot of creativity to solve the problems in my college math courses, so I would read the questions and then play the piano. My mind would open, and I would be able to solve the problems afterward. These days, I know I do my best strategic thinking early in the morning, so I dedicate time to big-picture projects then.

What she learned from marathon training
Distance running teaches you discipline, endurance and the importance of being prepared. I’ve seen people get hurt without adequate preparation. I’m not fast, but I do have endurance.

Her favorites: Chicago and Toronto “because they were flat.”

On balancing family life and academic leadership
At North Carolina State University, where I held various leadership positions, I had many events to attend while my children were very young. Kids were not really expected at these events, but I decided to change the dynamics. I asked the chancellor if I could bring a child with me, and he always said it was fine. He always welcomed that with open arms and celebrated the fact that I was bringing my family. That type of leadership was very impactful for me, and I’ve been inspired to continue working to make family life and academia compatible. People shouldn’t have to choose. We need to create opportunities for flexibility in our work that will make it easier to do both.

On playing in other people’s backyards
In my field, we say the wonderful thing about being a statistician is that you can play in everybody’s backyard. What that means is that you can follow your passion and use statistics with the most relevant problems in the discipline that interests you. My passion has always been nature and the environment because I grew up in the mountains, and I am invested in preserving water quality and the natural world. My research is linked to environmental problems and their human impacts.

How she gets it all done
I schedule everything in my calendar — meetings, focused thinking time, meals, exercise. If it’s not in the calendar, it doesn’t happen. Every day I make sure to set aside time for strategic thinking so that I’m being proactive rather than reactive and helping the university move forward. I make sure I’m always prepared for meetings so the meeting is a good use of everyone’s time. I say no to some things. I make sure I have time to take care of myself by sleeping and exercising. And whatever I’m doing, I try to be fully present. When I’m with my kids and I’m helping them with homework or preparing dinner, that’s my time with them, and colleagues know not to expect me to be available. And I have learned not to carry work with me wherever I go, either.

On being the first Hispanic president of St. Edward’s
It’s a responsibility and a privilege, and I want to make sure that I’m leading by example. In a way, I represent the majority of our students since St. Edward’s is both majority-female and majority-minority. At the same time, because I don’t fit the stereotype of a university leader, there are still challenges ahead. My goal is to break down those barriers and make it easier for others who follow.

Story and Interview by Robyn Ross
Photography by Chelsea Purgahn 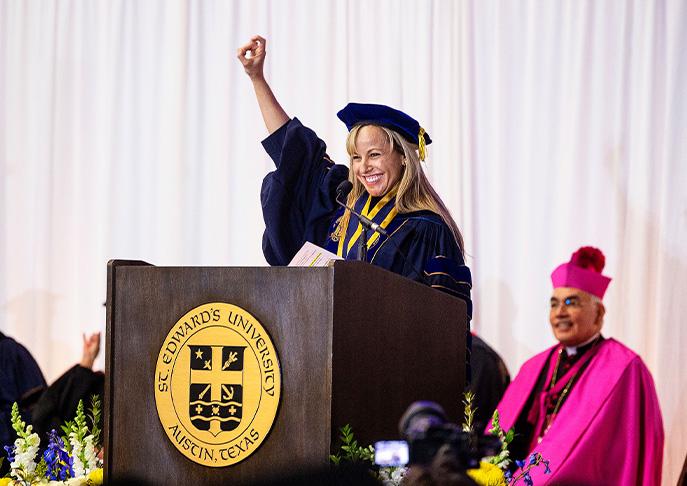 The weekend of Feb. 25–26, 2022, was packed with events celebrating St. Edward’s and its 24th president. Throughout the festivities, our campus community and guests came together to celebrate this historic inauguration of the first Hispanic president of the university and her vision for the future of St. Edward’s.

Enjoy highlights, photos and video from the event 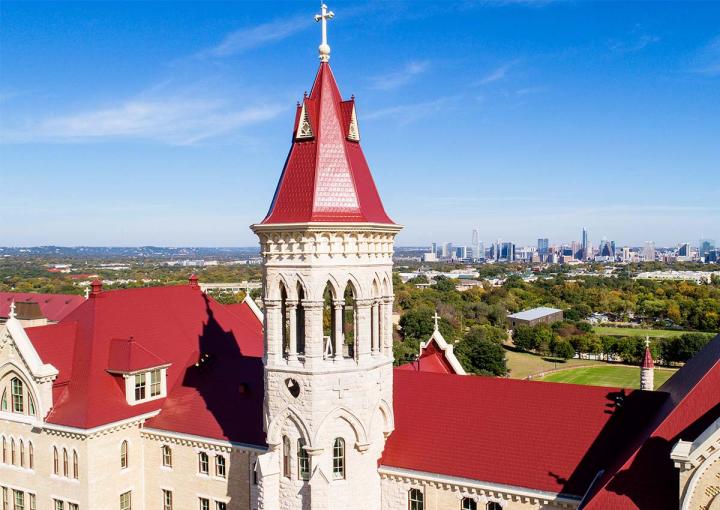 A Destination University for a More Just World

Over the past year, St. Edward’s developed a strategic plan to guide the university forward through 2027.  Building on the university’s strengths and Holy Cross identity, the plan is an ambitious vision for continuing to elevate the quality of a St. Edward’s education while emphasizing justice, equity and a mutually beneficial relationship with the Austin community.

Learn about the 5 goals of Strategic Plan 2027