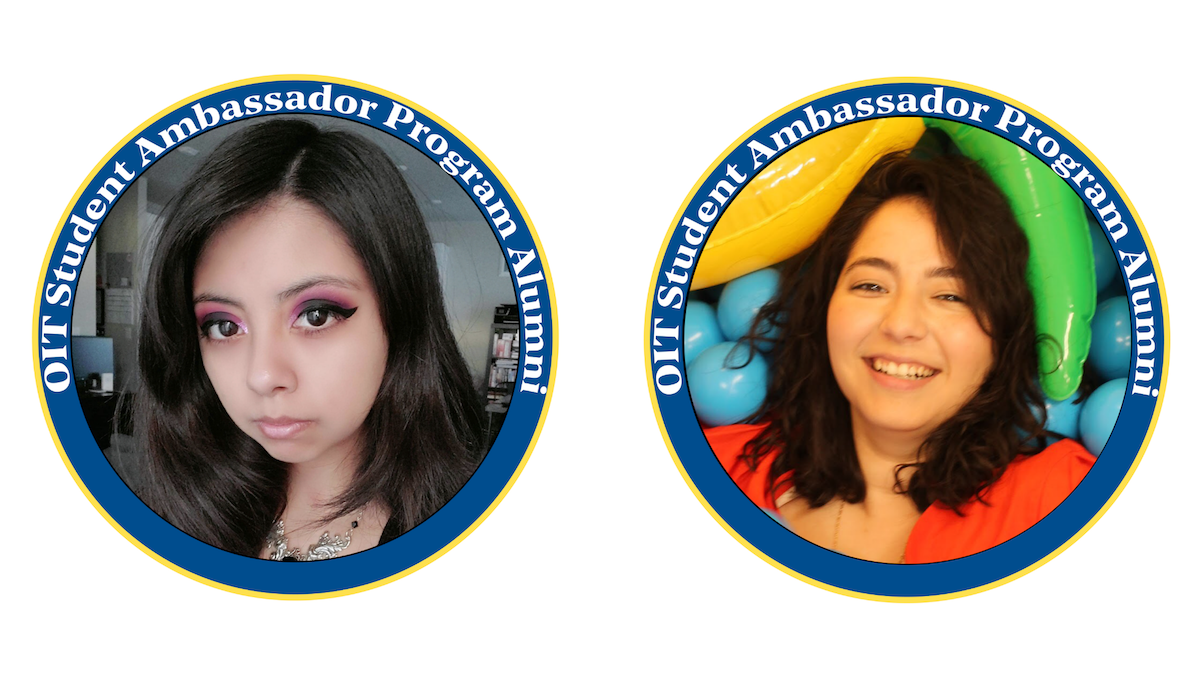 Join the Office of Information Technology (OIT) as we welcome back alumni of the OIT Student Ambassador Program! In this panel, we discuss what skills our panelists learned while working for OIT as students, how those skills set them apart in the job market, and what advice they have for current students at St. Edward’s University.

The OIT Student Ambassador Program is a professional development program that prepares college students for their post-graduate careers by giving the ambassadors meaningful, hands-on work where they interact with full-time OIT staff on a day-to-day basis. OIT Student Ambassadors act as advocates for OIT's initiatives and provide the top-quality support and assistance that keeps the university running.

Please tell us who you are, where you're from, why you chose to go to St. Edward's, what you studied while you were here, what you did for OIT and where you are today.

Hi, I'm Celestina. I'm from Houston, I moved to Austin for college to go to St. Edward's, and I stayed here for work. I got my degree in Interactive Game Studies (now called Video Game Development).

As part of the OIT Student Ambassador Program, I worked in Support with the Help Desk. That job really helped me get me where I am now. I currently work as a Support Engineer for Atlassian for the products of Opsgenie and status page.

That sounds exciting. Tell us what you were working on just recently. I love to hear that you were raising some funds earlier this year.

Yeah, so my company is very big on giving time or money to donate. They give us a ton of volunteer hours, and they bring up a lot of volunteer opportunities.

Atlassian actually has a gamers team, and all of us got together to do a 24-hour stream with Extra Life to raise money for Children's Miracle Network Hospitals. Atlassian actually price matches any eligible contribution. So, that fund-raising counted as an eligible contribution, and it got doubled. That was really fun, and that's why my hair is short. During the livestream, I did challenges like eating BeanBoozles, doing the one chip challenge or cutting my hair every $100 donation mark we hit.

That's wonderful to hear. Edeliz, please go ahead and introduce yourself.

Hi, I'm Edeliz, and I'm from South Texas. I decided to go to St. Edward's because I really wanted to be in Austin, I was looking to get a film degree, and I wanted to go to a smaller school. So I got a communication degree with a focus in media broadcast journalism, and I minored in English, which has actually come in handy.

I started working for OIT as a communication associate during my junior year, I believe. I learned a lot doing that. I did a lot of event planning and copywriting. Then, I transferred over to the Digital Media Center, which was a much better fit for me because I was more into doing videos and audio. So, luckily I ended up getting a job after college as a sound designer for Mood Media, and now I am a voiceover artist.

Can you talk a little bit more about some of the projects you're working on as a voiceover artist?

I got my job as a sound designer at Mood Media about a year and a half after graduating. They do the messages you hear in stores, like when you go to a retail store, like T.J. Maxx or a Walmart. I was somewhat skilled in doing voice work during college, and it ended up coming in handy for this job. So now I do the voice for stores like Walmart, T.J. Maxx, Sketchers, Home Goods... So when you hear that voice in a store that says, "Hello, shoppers!"... that's what I do now.

Throughout the OIT Student Ambassador Program, we're trying to make sure we put students in the roles they will enjoy and thrive in. Could you speak about some of the skills you picked up in your roles with OIT and how they helped you transition into the roles and projects you're working on now?

Now, I know how a ticketing system works, the different parts of the ticketing system, how to talk to a customer via the web or via phone. I had a lot of digital customer service training both with OIT and then with my first job out of college, which was with Box. I also learned a lot of other skills with OIT, like, reimaging Macs. I don't work a lot with hardware now— my past two jobs have been software— but I was able to bring that up in my job interviews to show how I was willing to learn things that I wasn't familiar with. I also knew a ton of different software programs working for OIT because we had to learn a bunch of different programs, not just one. So, that made me familiar with Box, and that's how I got my job at Box. As a result, I translated everything I've gathered from both jobs to Atlassian. So, I keep adding to my little tool bag of skills.

During my time working at the Digital Media Center, I learned the ins and outs of Premiere Pro thanks to guidance from OIT staff. I also worked with cameras, equipment and lighting while filming campus events. So after I graduated, I had those skills, and I used them to get jobs and internships. But really, the wide range of work I did, everything from copywriting to video editing, ended up helping me later on.

I would think that you consider yourself kind of like an entrepreneur. Could you speak to some of the skills that helped you transition from working for a company to moving into self-employment?

Yeah, a lot of tact, I guess. Even when I was in school, I knew that I wanted to be self-employed at some point. I really didn't think that it would end up being what I do now because I sort of fell into voiceover and fell into the job that I have now. In terms of the skills, I think having a ton of skills, instead of just having one thing that you focus on, is something that I took away from my time in college. So now, I can offer my clients a range of things. For example, not only can I do voice work, but I can also do podcast editing, or sometimes they need video editing for something on Instagram.

Think back to where you were as a student in OIT. What advice would you give yourself when you were a student?

Just go for it. Any job you see that you're interested in, even if you don't think you're qualified for it, just apply if you check off most of the boxes. The job postings aren't always made by the team that's hiring. It's usually the HR team or the recruiting team. The hiring team might give them certain criteria, but then the hiring manager or the recruiters might add some stuff.

Also, if you think you can learn something on the job posting, just apply. That's what I ended up doing. I didn't feel confident when I applied to Box. I was like, I fit most of that, but I feel like they won't hire me because I'm missing X, Y, and Z. But I applied anyway, and I got through the whole interview process and ended up working there. So, my advice is just apply. Give it a chance.

Applying to jobs is good practice, anyway. It's all worth it. Even if you think you're not going to make it, you'll get at least something out of it.

My advice would be to try everything once or even a few times. So, my advice is to be open. You might end up doing something different than what you anticipated. When you try a little bit of everything, you get a broader range of skills. Also, something I did in college a lot was volunteer for festivals, which really helped me develop my socializing skills, which is hard once you leave college.

Celestina, you mentioned going to interviews to get practice, even though you don't feel like you fit that role. Reflecting back, do you think having mock interviews before you go into the workforce would be something you would have liked to do?

I actually did some interviews while I was an Ambassador. We had the opportunity to interview other students who would be taking over our roles once we left. I thought that was super helpful because we got to see both sides, interviewee and interviewer.

That skill translates into many aspects of the workforce. For example, your team might put you on their interviewing panel or suggest that you do the interview training that their company offers.

I used the Career and Professional Development Office to tweak my resumé. I went to them a lot for revising and to ask questions. Also, I took a class where we did mock interviews, and we reviewed each other's resumés and cover letters.

I also made myself a playlist to hype me up, so I recommend doing that. Make a hype playlist that makes you feel like you're the best and you're on top of the world, and you'll go into that interview feeling pretty confident.

So, just remember that the ball is in your court and be careful to not be taken advantage of because that can happen in your early 20s when you're first trying to get a job.

And you have options, you can say yes, or you can say no. You might have multiple job offers, and at that point, you have a lot of power.

If you could go back in time and change anything about your college experience, what would you change?

If I could go back and tell my college self something, it would be to have faith in myself and have a lot of patience. If you don't get a job in the field you studied, sometimes it's for the best and can lead to many other opportunities. I would also like to add that TikTok is an incredible resource for anything. For example, I went on TikTok and looked up how to write a cover letter. It's just a one-minute video, so if my 20-year-old college self had had TikTok or just like a quick resource, I feel like I would have done so much better.

Also, there are so many people who are in this with you. I think it's easy to feel very alone at this time in your life, especially after just graduating. So, know that you're not alone and that things will get better. You will succeed, even if you don't do it immediately.

I wouldn't change anything. I think I'm very happy with how things turned out. I wouldn't change my major. I wouldn't change opportunities. I don't think I was in the best headspace to take on more internships or projects when I was in school. I knew my limits. So I guess that's the advice I would give is: know your limits, and if you need help, ask for help.

Thank you to our panelists for sharing their insight with St. Edward's students. OIT wishes you the best of luck and cannot wait to see where life takes you next.

Keep up with Edeliz and Celestina by staying connected with them!