St. Edward’s University is pleased to announce the launch of “The Campaign for St. Edward’s University: Opening Doors to Their World,” which has a goal of raising $100 million by 2017. To date, the university has already secured $71.6 million. St. Edward’s has been visibly impacted by this fundraising success during the quiet phase of the campaign, which began in 2007. New facilities made possible as a result of this campaign’s efforts include the 47,000 square-foot Munday Library and the 55,000 square-foot John Brooks Williams Natural Sciences Center–South. Renovations are also underway for the University Federal Credit Union Alumni Gym and the Our Lady Queen of Peace Chapel. With all major capital enhancements funded, the remainder of this campaign will focus on bolstering the university’s endowment.

Today’s campaign launch is highlighted by the announcement of a major gift towards the endowment from Luci Baines Johnson and Ian Turpin. Their generous gift will be recognized this evening at a celebration in which other major campaign contributors and distinguished alumni will be recognized.

A gift of $1.1 million to St. Edward’s University, generously provided by Luci Baines Johnson ’97 and Ian Turpin, creates an endowment that will enable undergraduates from migrant farmworker families to participate equally with their peers in activities proven to promote high achievement.

The new Johnson-Turpin CAMP Enrichment Endowment provides funding for educational opportunities such as: study abroad, undergraduate and faculty research, presentations of research at conferences, professional internships, service learning, and preparation for graduation, including guidance in applying for prestigious fellowships and scholarships. 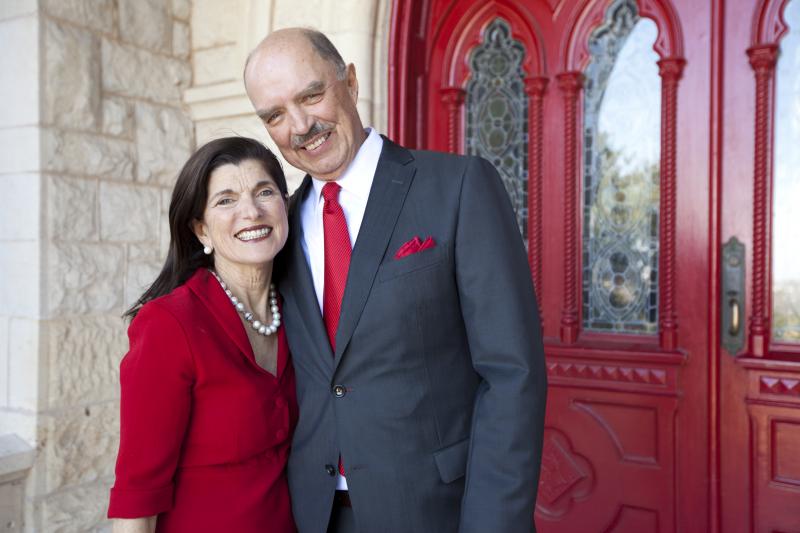 CAMP owes its existence to President Lyndon B. Johnson’s “War on Poverty” legislation, which was introduced in his State of the Union Address in 1964. By initiating this new endowment, Johnson and Turpin are building on President Johnson’s legacy and St. Edward’s University’s 42-year history of outreach to migrant students.

"To whom much is given, much more is expected,” says Luci Baines Johnson. “As a trustee and an alumna, St. Edward's has given us wonderful opportunities. It is only right that our major gift to
St. Edward’s gives opportunity to the descendants of migrant workers who inspired my father’s commitment to social justice. Daddy believed these young people had all the potential to achieve great things if only given a chance. We believe CAMP gives them that chance, and we are proud to invest in CAMP scholars so they can make a difference in the world!”

The new endowment will fund enrichment activities for approximately 10 to 12 CAMP students each year. The Johnson-Turpin Scholars will benefit from career mentoring, financial literacy education, support for summer internships, research opportunities, study abroad and postgraduate preparation. St. Edward’s currently provides CAMP students with full-tuition support; nevertheless, financial constraints and family obligations (including returning to work alongside parents in the fields in the summer) all too often prevent CAMP students from taking advantage of life-changing opportunities. The Johnson-Turpin Endowment will provide CAMP students a pathway to excellence to become the uncommon leaders and problem solvers of tomorrow.

Luci Baines Johnson chose St. Edward’s to complete her own degree in large part because the university’s mission reflects her father’s vision and her own passion for social justice. No program better illustrates this mission than CAMP. Johnson’s husband, Ian Turpin, shares the belief that education is the passport to a better life. Turpin has been a member of the St. Edward’s University Board of Trustees since 1997 and currently serves as chair of the board’s fiduciary committee.