Against the backdrop of immigrant family detention and stricter standards for asylum claims, social service providers and advocates in the United States are busy providing support to a wave of female immigrants facing considerable obstacles.

Women from the “Northern Triangle” of Central America — which includes El Salvador, Guatemala and Honduras —are crossing the U.S.-Mexico border in increasing numbers to escape poverty, domestic violence, gang violence or other life-threatening circumstances.

In addition to understanding the circumstances that cause these women to flee, advocates and social workers are seeking to better understand the needs of these communities of women in comparison to the needs of other groups of migrants. Enter Laurie Cook Heffron, assistant professor of Social Work at St. Edward’s University, who undertook a study to better inform advocacy programs and federal and state policy of the challenges facing this population.

The study’s findings illuminate the present-day reality that migrant women from Central America are vulnerable to violence and abuse throughout their journey, including during their stay in U.S. immigration detention facilities. The study, titled “Salia de Uno Y Meti en Otro: Exploring the Migration-Violence Nexus Among Central American Women,” (I left one bad situation and entered another) was published in the Violence Against Women Journal on Sept. 21, 2018. Cook Heffron interviewed 19 women seeking asylum and drew on a larger context of community work. This research is explored and extended in a more recent study with co-authors Josie Serrata and Gabriela Hurtado, "Latina Immigrant Women & Children’s Well-Being & Access to Services After Detention."

“Seeking asylum isn’t a crime. One of the things that I thought this study could do is help us understand the constellation of violence that women experience,” Cook Heffron said. “Women are often trading one threat of violence for another, and they may be willing to accept additional risks associated with migration.”

During migration, women are vulnerable to sexual assault, rape as a price of border-crossing, and exploitation or human trafficking. In some cases, the experiences of violent acts interact with one another and create cumulative trauma, Cook Heffron said.

“Women often experience sexual violence while crossing multiple international borders and then further violence or exploitation here in the United States, whether that be in drop houses or stash houses, where immigrants are held by smugglers, or in immigrant detention centers funded by the U.S. government and operated by private, for-profit companies,” Cook Heffron said. 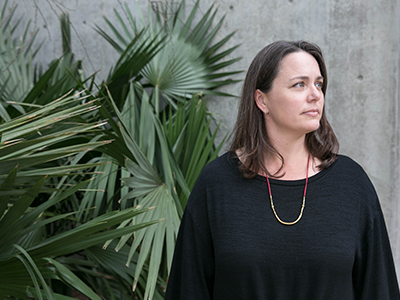 The study sheds light on the impact of immigration detention, which is often a less-recognized traumatic experience among women, Cook Heffron added.

A 2018 study by Cook Heffron, Serrata and Hurtado reports that U.S. immigrant detention practices include keeping women and children in cold hieleras (coolers), keeping lights on at all hours, delivering insults and humiliation, withholding information, isolating women from one another and from their own children, in addition to outright sexual harassment and abuse.

"When survivors of violence are detained by the immigration system, they are often exposed to similar strategies that past abusers or past perpetrators used against them to maintain and gain control,” Cook Heffron said. “The conditions of detention oftentimes mirror past abuse and violence in ways that can increase the traumatic impact and negative mental and physical health outcomes for women.”

Heffron hopes that recognizing the chain of violence and abuse will help social workers, advocates and others to better care for and equip this population.

“I think the study can help us understand how we might need to improve, increase and expand our screening of past abuse among women to better assess the impact of trauma from immigrant detention,” Cook Heffron said. “This information can also help us to better plan and prepare our service responses.”

Funding for this research was supported by The University of Texas at Austin, Charles W. Laughton Endowed Presidential Scholarship and Louis E. DeMoll Endowed Presidential Scholarship. Funding for the 2018 study by Cook Heffron, Serrata and Hurtado was supported by the Southern Methodist University Town Center and Latino Center for Leadership Development with additional support from St. Edward’s University and Casa de Esperanza’s National Latina@ Network.