When Brother Romard Barthel, CSC, ’47 handed a young freshman at St. Edward’s University a copy of The Handbook of Physics over 50 years ago, he never imagined the impact it would have.

Marusak received the book from Brother Romard as a reward for being the Physics Student of the Year.  When returning for a campus visit in 2006, he asked Brother Romard, longtime professor and director of the Physics program, to sign the book.

“I’ve used what I learned in this book my whole life,” Marusak said, “and your name in it would mean a lot to me.”

As an undergraduate, Marusak spent almost three years under Brother Romard’s tutelage before he left St. Edward’s to finish his degree closer to his family’s farm in Ennis.

“The brothers, especially Brother Romard, gave him the opportunity to thrive. They had a significant impact on his life, just as they did mine,” remembers classmate Bob Wilems ’63. 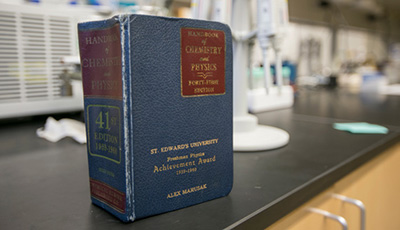 Marusak honored his mentor by contributing $10,000 to the Brother Romard Barthel, CSC, ’47, Endowed Scholarship Fund, an effort Wilems spearheaded in 2005.

When Marusak discovered he had terminal pancreatic cancer in 2006, he made a provision in his will designating St. Edward’s University as one of the primary beneficiaries of his estate. He passed away just a few months later, and his wife, Nancy — a geologist he had met at Los Alamos — kept the bequest intact.

When Nancy died last year, St. Edward’s learned that the Marusaks left the majority of their estate to the university for scholarship endowment. Ultimately, the Marusak gift will provide financial aid to hundreds of students through the scholarship honoring Brother Romard, which will include research stipends that will continue to help St. Edward’s attract top students in the sciences.

St. Edward’s also received Marusak’s copy of The Handbook of Physics, inscribed on the inside cover with this: “Alex, you’re still #1!”

Characteristically, 91-year-old Brother Romard is humble about the scholarship and research funds honoring him. “I have a hard time realizing I’ve had an impact in people’s lives,” he says. “But if I’m going to be honored in any way, I like this forum very much.”