Inside many Latino homes in the United States, families often communicate using both English and Spanish, switching seamlessly between the two languages. While the older family members likely use more Spanish than English, the children are usually English-dominant. Although their communicative skills in Spanish are a valuable resource, the young people often carry a stigma about the kind of Spanish they speak.

Enter Emily D. Bernate, assistant professor of Spanish and Linguistics at St. Edward’s University, who is working to remove the stigma by using research to prove that the Spanish spoken by heritage speakers (people raised in a home where a non-majority language is spoken) is a valuable resource that should be cultivated. Bernate is hoping to elevate the often-dismissed variety of Spanish called U.S. 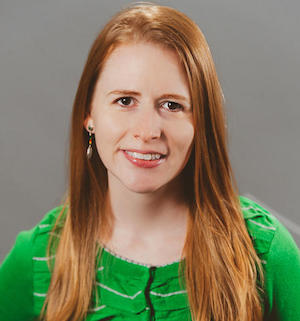 Spanish. Her goal is to help educators work more effectively with heritage learners to build upon their language and cultural knowledge.

“First, I want people to understand that just because it (U.S. Spanish) sounds different, it doesn’t mean that it’s wrong, not useful or shouldn’t be celebrated,” Bernate said. “The problem is that we’re telling heritage speakers that they don’t really speak Spanish. We are teaching them to deny their language skills, and say things like, ‘Oh, I don’t really know Spanish, I just speak Spanglish,’ rather than recognize that they have a vast range of linguistic and sociolinguistic tools.”

A linguistics researcher, Bernate believes that lessons gleaned from syntax, morphology and pragmatics can help to leverage the nation’s resource of bilingual speakers. About 40 million people in the U.S. say they speak Spanish in their home, making Spanish the second most spoken language in the U.S., according to the Pew Research Center.

She believes a better understanding of how and why heritage speakers rely on linguistic shortcuts, such as verb simplification, can help educators validate what speakers are already doing and help them “expand their linguistic repertoire to communicate more effectively.”

Bernate has authored a soon-to-be-published book chapter on the expression of linguistic politeness in U.S. Spanish. Meanwhile, she’s applying her linguistics research to her own classroom, teaching a Spanish course designed for heritage speakers at St. Edward’s. We asked her about her research and teaching:

What is U.S. Spanish and why does it matter?

I would define U.S. Spanish as the variety of Spanish spoken by Spanish-English bilinguals in the United States, a dialect which reflects the dominance English holds in our society.

When we fail to see how U.S. Spanish is just another case of language variation, we start to discount the language resources that we have in this country. We have a growing Hispanic population here, and we're not tapping into those resources.

Why is it important to study the linguistics of Spanish in the United States?

When I look at something as minute as bare-if clauses (like ‘if you could help me, please’), I’m really just analyzing how U.S. Spanish differs from other dialects, particularly because of the influence and power that English has over Spanish. In the case of bare-if clauses, Spanish is different from English in that when we make requests, we express different levels of politeness through different verb conjugations. And speakers of U.S. Spanish don’t use as many verb conjugations because they don’t have as many opportunities to hear them and reproduce them. It’s not like speakers of U.S. Spanish are incompetent. It’s very natural to use fewer verb forms in your non-dominant language. That’s just a normal thing.

Your latest research focuses on the expression of politeness. How is politeness in U.S. Spanish different from other varieties of Spanish? Can you give an example?

If I want you to help me carry a bunch of books, a monolingual speaker might say something like, [Si me pudieras ayudar, estaría muy agradecida] [If you could help me, I would be extremely grateful]. The verb forms here, imperfect subjective and conditional, are very complex. They’re difficult verb forms for somebody to manage if they’re not using Spanish all the time.

In a variety like U.S. Spanish, speakers are going to more readily have verb forms that are necessary for describing their immediate reality. But then what happens when they need to express politeness? My point is that they can still do so, but use other linguistic strategies that a monolingual speaker might not use. So, adding the word ‘if’ is another resource. I could just say [Si me ayudas con los libros], which is literally, "If you help me with the books."

So the ‘if’ takes a request that could sound demanding without the use of complex verb forms and adds a level of politeness by suggesting the request may not be possible. It gives the listener an out.

Do most Heritage speakers recognize that they’re simplifying their verbs?

I think that on a very general level they recognize that their Spanish is different from their parents’ variety. They understand that their Spanish sounds more informal than that of a monolingual speaker. But they don't know that it’s just the brain working — the brain is fantastic at finding tricks and shortcuts to express what we need to express even when we don't have all of the linguistic tools available. Once they can understand why their Spanish sounds different, they realize that they’re normal, like every other bilingual person in the world whose brain looks for shortcuts.

What is the takeaway for educators?

I want educators to recognize how they can work with these students and validate what they’re already doing. Students can then build on the knowledge they already have to expand their linguistic repertoire and communicate more effectively. If a student comes in and says something in U.S. Spanish, then I make a mental note and later say, ‘We should probably learn how to use hypothetical verb forms and we should practice.’ The idea is that when they communicate with a monolingual speaker that doesn’t have the same linguistic codes as somebody that speaks U.S. Spanish, they can learn to be effective in that situation, too.