Douglas Brinkley will be 2018 Commencement Speaker

Douglas Brinkley, a teaching innovator and bestselling author, will receive an honorary degree and serve as principal speaker at the 2018 commencement ceremony at St. Edward’s University.

Brinkley was selected because his contagious enthusiasm for history and the humanities embodies the St. Edward’s mission of helping students develop critical and creative thinking skills and become lifelong learners.

After earning his doctorate from Georgetown University, Brinkley went on to teach at institutions of higher learning including Hofstra University, the University of New Orleans, Tulane University and Rice University, where he was a fellow at the Baker Institute for Public Policy and has been a professor of history since 2007.

One of Brinkley’s most creative teaching innovations was his 1992 “American Odyssey” course. He packed 17 Hofstra University students into a sleeper bus for a six-week, cross-country trip to study history and literature lessons specific to different regions of the country: William Faulkner in Mississippi, Hunter S. Tompson in Las Vegas, and John Steinbeck and Jack London in California. 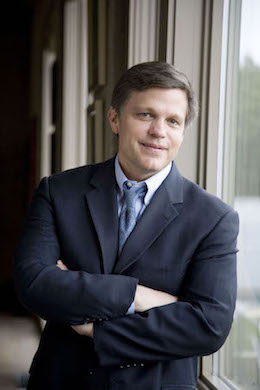 Brinkley wrote about the trip in his popular 1993 book, The Magic Bus, one of 40 books he has written, edited or co-written. His biographies have told the stories of Walter Cronkite, Franklin and Teddy Roosevelt, Jimmy Carter, John F. Kennedy and Henry Ford. And as CNN’s presidential historian, Brinkley helps thousands of viewers understand current events in historical context.

Brinkley continues to make his own discoveries across the humanities. He has written extensively about the history of conservation. He has edited Jack Kerouac’s diaries and Hunter S. Tompson’s letters. In 2017, he even won a Grammy Award for producing the Ted Nash Big Band album Presidential Suite: Eight Variations on Freedom. ​

In recognition of achievements that reflect a deep commitment to education and civic engagement, St. Edward’s will award Douglas Brinkley with an honorary degree of Doctor of Humane Letters, honoris causa, at the commencement ceremony.