The Texas Teen Book Festival is here! This Saturday, Sept. 26, St. Edward’s University will be jam-packed with all-star author sessions and panels, book signings, workshops, vendor displays, and 4,000 enthusiastic Young Adult genre fans of all ages. The 32-author lineup represents some of the most popular and critically acclaimed authors in the wildly popular YA genre.

The headlining speaker is Emmy Award-winning actress and author Sonia Manzano, best known for her role as “Maria” on the PBS series Sesame Street. Manzano, who recently 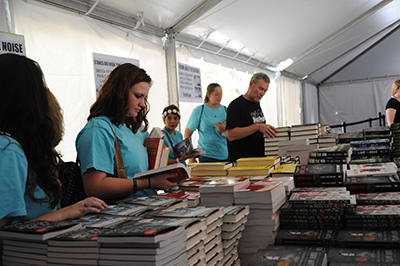 announced her retirement after more than four decades on the show, will present her new coming-of-age memoir Becoming Maria: Love and Chaos in the South Bronx.

The Festival’s lunch speakers are Jesse Andrews (Me, Earl, and the Dying Girl), Rick Yancey (The 5th Wave), and Kaui Hart Hemmings (The Descendants). The closing speakers are David Levithan (Another Day) and Libba Bray (Lair of Dreams).

The full list and schedule are available at www.texasteenbookfestival.org.

The one-day Festival takes place from 8:30 a.m. until 6:30 p.m. on the campus of St. Edward’s University, 3001 South Congress Avenue. Like its big sister the Texas Book Festival, the TTBF remains free and open to the public thanks to generous donors, sponsors, and dozens of committed volunteers.

The winners of the first Texas Teen Book Festival Writing Contest, sponsored by Delacorte Press, an imprint of Random House Children's Books, were announced on Sept. 1. The winners are Jack Dessert from Dallas (Telling Time), Madeline Sweany from Austin (Glory of the Witches), and Nikhil Prabala from Austin (Hell to Pay). Each winner will receive a cash prize, as well as a full editorial review by a Delacorte Press editor. In addition, the Writing Contest winners will receive special recognition at the Festival’s opening ceremony.

“The world will always need story tellers, and seeing these kids’ commitment to telling stories gives me peace of mind,” says Writing Contest judge and YA author Lindsey Lane (Evidence of Things Not Seen) who will moderate the “No Risk, No Reward” panel at the Festival this year.

The slate of contests for the Game Show includes a Jedi Pose-Off complete with light sabers, Jedi Mind Control Match Ups (similar to Catch Phrase, in which an author tries to get his or her teammate to guess words on the screen using verbal clues), Jedi Speed Drawing Pictionary with time limits to be set by someone humming the Darth Vader theme, and the ever-popular “Fluffy Bunny” Marshmallow Game in which authors will stuff as many marshmallows into their mouths as possible while saying "Boba Fett.”

Of the Game Show, program director of the Texas Teen Book Festival Meghan Goel says: “The tests will be grueling, but fair. May the Force be with you, contestants. Just remember: ‘Do. Or do not. There is no try.’”

There will be a graphic novel panel entitled “Drawing Between the Lines,” moderated by Griffin Mauser with authors Stephen Emond, Gareth Hinds, Andrew Smith, David Yoon, Nicola Yoon from 3:30 to 4:15 p.m. in the Mabee Ballroom.

Badgerdog Literary Publishing sessions of note include the Poetry Workshop with National Poetry Series winner and writer-in-residence at St. Edward's University Carrie Fountain, from 2:30 to 3:30 p.m., and Fiction Workshop with writer and co-director of A Strange Object Callie Collins, from 3:30 to 4:30 p.m., both of which take place in Library Classroom 1.  Attendees must register in advance here, and space is available on a first come, first-served basis.

The BookPeople Teen Press Corps will provide live coverage of the Texas Teen Book Festival on the Festival’s blog and Facebook, Twitter, and Instagram. The group of enthusiastic teens have been planning for months and will be on the front lines of every panel, presentation, and of course, the epic “Star Wars Game Show” to record the excitement, energy, and antics of this year's authors. BookPeople Teen Press Corps will also interview authors and have an outdoor photo booth to meet Festival-goers and encourage them to engage in conversations in person and online.

To help attendees plan their day, the Texas Teen Book Festival schedule is available on the interactive app SCHED and can be downloaded here. Attendees can also download SCHED on mobile devices including iPhone, Androids, and Blackberries, so they will have their personal schedules handy on Saturday.

The Texas Teen Book Festival is presented in collaboration with the Texas Book Festival, BookPeople, a dedicated group of librarian volunteers, and venue sponsor St. Edward’s University. The program is also made possible in part by a grant from Humanities Texas, the state affiliate of the National Endowment for the Humanities.

About the Texas Teen Book Festival

The Texas Teen Book Festival is a one-day event that celebrates the teen reading experience by inviting fans to visit with some of the most popular and critically acclaimed young adult authors in the country. The Texas Teen Book Festival was born as the Austin Teen Book Festival in 2009, when librarian Heather Schubert partnered with BookPeople to organize a gathering at Westlake High School. Five hundred people and 16 authors attended the first year. The event continued to grow, and in 2011-2013 was sponsored by the Austin Public Library Friends Foundation. In 2014 the Festival became a program of the Texas Book Festival and was renamed the Texas Teen Book Festival. One of the largest gatherings of its kind anywhere, the annual TTBF takes place in the fall on the campus of St. Edward’s University. For more information, visit texasteenbookfestival.org and join the conversation online using #ttbf15.