Our time on the hilltop shapes us for the rest of our lives. As we take what we learn from the Holy Cross tradition away from Austin and into the rest of the world, we become part of a growing community of alumni united by our shared experiences. As a symbol of our connections to each other and to the university, St. Edward’s has worked closely with Balfour to design an official University Ring available to graduating students and alumni.

Orders must be placed by Friday, February 10, 2023, to be received in time to participate in the University Ring Ceremony. Deadlines have been emailed to eligible students.

All eligible students (90+ credit hours completed) or alumni can order a ring by one of the following ways:

If you would like to view a physical ring, please stop by the University Bookstore or the Office of Student Involvement. 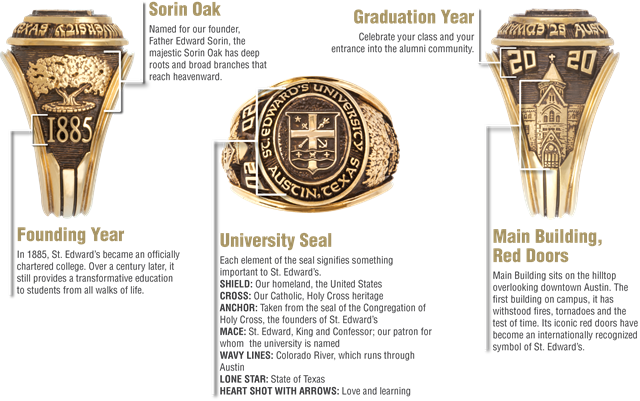 Individuals eligible to purchase a ring include:

Contact the Registrar, your advising specialist or view your unofficial transcript under the My Academic Profile task in myHilltop to verify eligibility.

In Fall 2012, three students approached the university hoping to create a new tradition that would become a source of lifelong pride for Hilltoppers. Their idea has now become a reality. Designed by and for St. Edward’s University students, the official ring captures the very essence of the university.

Four beloved symbols were chosen to celebrate the tradition and history of life on the hilltop. Recognizable around the world as an icon of St. Edward’s, the red doors bring students full circle during the Legacy Walk that begins freshman year and concludes at Hilltop Send Off. Main Building stands grandly at the heart of our famed hilltop campus as it has since 1888. Sorin Oak, named for our founder, Father Edward Sorin, creates a serene and profound place for students. The university seal represents our Holy Cross heritage and our Texan identity, reminding students of the soul of St. Edward’s.

The ring commemorates your academic success as a student at St. Edward’s. As a common bond shared between past and future graduates, it identifies you as a member of the Hilltopper family.