The Kozmetsky Center at St. Edward's University provides a forum for global dialogue and exchange of diverse perspectives among the academic, policy and private-sector communities-

The Kozmetsky Center promotes comprehensive multi-disciplinary approaches to subjects that impact global security. Learn about how our conferences tackle critical issues, such as the religion-security nexus.

Dr. Schellnhuber was quoted in a BBC article of July 2019 stating that "The climate math is brutally clear: While the world can't be healed within the next few years, it may be fatally wounded by negligence until 2020.” Hans Joachim (“John”) Schellnhuber studied Physics and Mathematics and completed his PhD in Theoretical Physics at the University of Regensburg. He has published extensively on topics of climate change, global warming and security topics at the intersection of science and earth systems and space. Professor Schellnhuber served as founding director of the Potsdam Institute for Climate Impact Research (PIK) in Germany from 1991 - 2018 and was research director at the Tyndall Centre for Climate Change Research in Great Britain from 2001-2005. He is a member of the Pontifical Academy of Sciences, the German National Academy Leopoldina, the US National Academy of Sciences, and the Academia Europaea, and the recipient of the German Environment Prize (2007), Volvo Environment Prize (2011) and Blue Planet Prize (2017). Dr. Schellnhuber served as scientific advisor to a number of eminent political and religious leaders, including German Chancellor Angela Merkel, European Commission President José Manuel Barroso and Pope Francis. He has been a member of the German Advisory Council on Global Change (WBGU) since its establishment in 1992 and contributed to the Intergovernmental Panel on Climate Change (IPCC) that received the Nobel Peace Prize in 2007. Dr. Schellnhuber’s lecture will explain sources of climate change and the threat posed to earth systems by global warming. 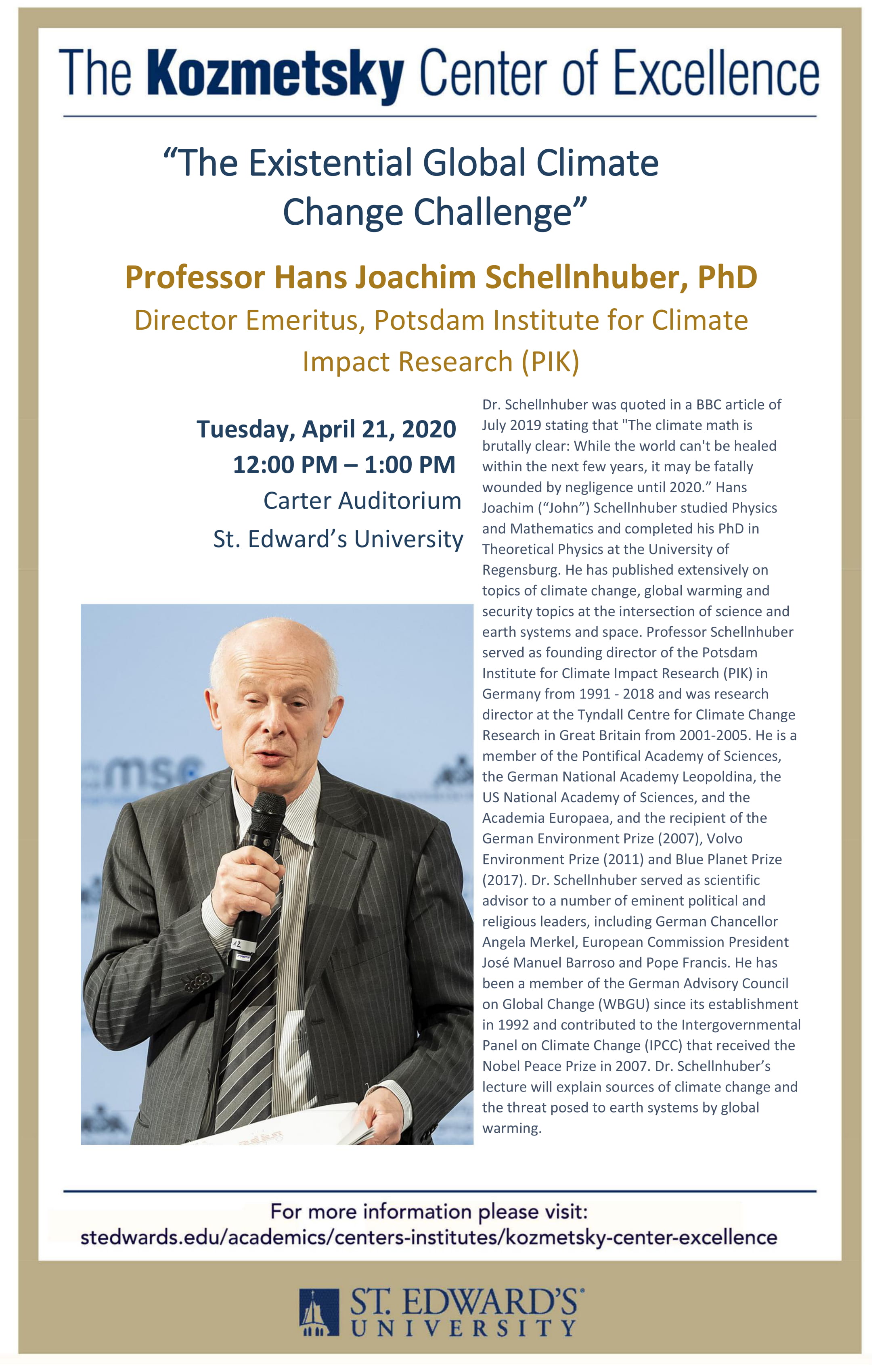 On Thursday, March 5, the Kozmetsky Center will host a screening of “A Cambodian Spring” dealing with public activism and protests over inequality and land rights. Winner of the Brooklyn Film Festival “Best Documentary,” A Cambodian Spring features the personal accounts of activists leading a movement to overthrow the dictatorial regime on Hun Sen. The film exposes political corruption and the human rights crisis in the country, and origins of political activism among its most vulnerable citizens.  This film is a testimony “of their struggle for dignity and justice, and a window into the sober reality of a nation and its possibilities for change.” SEU Professors Dr. Jooyoun Lee(Global Studies) and Dr. Imran Khan (History), subject area experts on Asia/ Southeast Asia, will offer their perspectives and lead a discussion following the film. The screening will take place in the Jones Global Events Center from 7:00-9:30 PM. 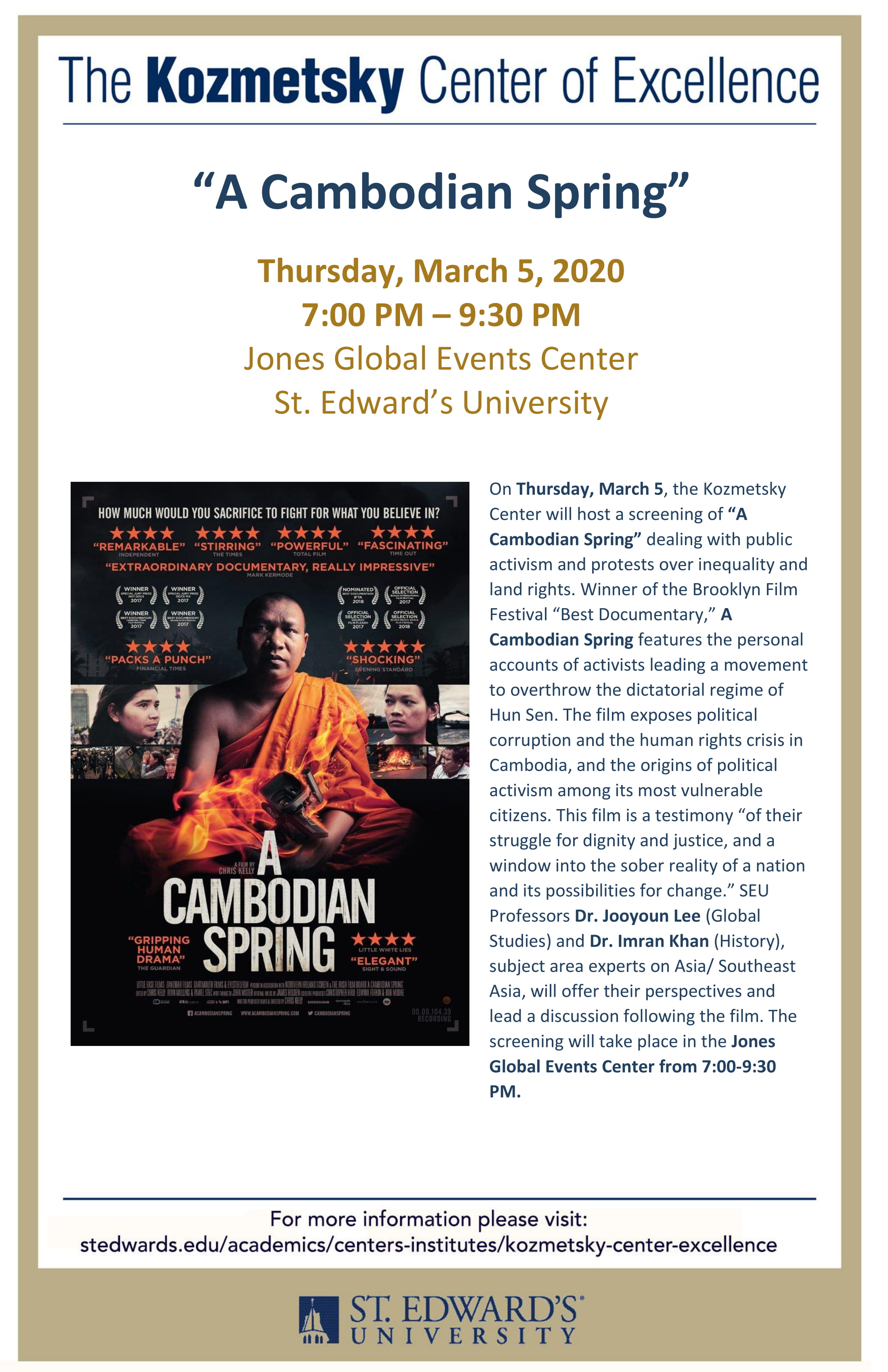 On Wednesday, February 5, the Kozmetsky Center will feature our first event for the new decade entitled “Exploring Religious-Policy/Security Nexus in Addressing Global Security Challenges.” The session is a continuation of the Kozmetsky Center (St. Edward’s University) and The Fletcher School of Law and Diplomacy (Tufts University) project series on religion in international security with the support of the NATO Public Diplomacy Division (Brussels). The session will feature perspectives of project leaders, policy/security practitioners, together with St. Edward’s University faculty of Religious Studies Dr. Kelley Coblentz Bautch and Dr. Jennifer Veninga. St. Edward’s University Professor Emeritus Father Lou Brusatti will join Imam Yahya Pallavicini, President of COREIS, the Islamic Religious Community of Italy to bring perspectives of the Catholic and Islamic faiths to the discussion. Project organizers are approaching the topic with the assumption that the international community faces challenges that can only be addressed by fostering comprehensive cooperative approaches. We hope that by facilitating exchanges among academic experts, policy officials, security and defense practitioners and religious leaders representing different nations and regions, we can strengthen networks of collaboration for addressing our most important human security challenges. Panelists will offer updates on recent project conferences, research initiatives and global engagement efforts as well as sharing views on the importance, potential and challenges in promoting cooperation among our global policy/security communities with religious faith communities in managing human security.  Topics might include violent extremism and terrorism, migration, drivers in contemporary geopolitical divisions, conflict resolution, climate change, and more. The forum will be held in Carter Auditorium in the John Brooks Williams Natural Sciences Center at 12:00-2:00 PM. 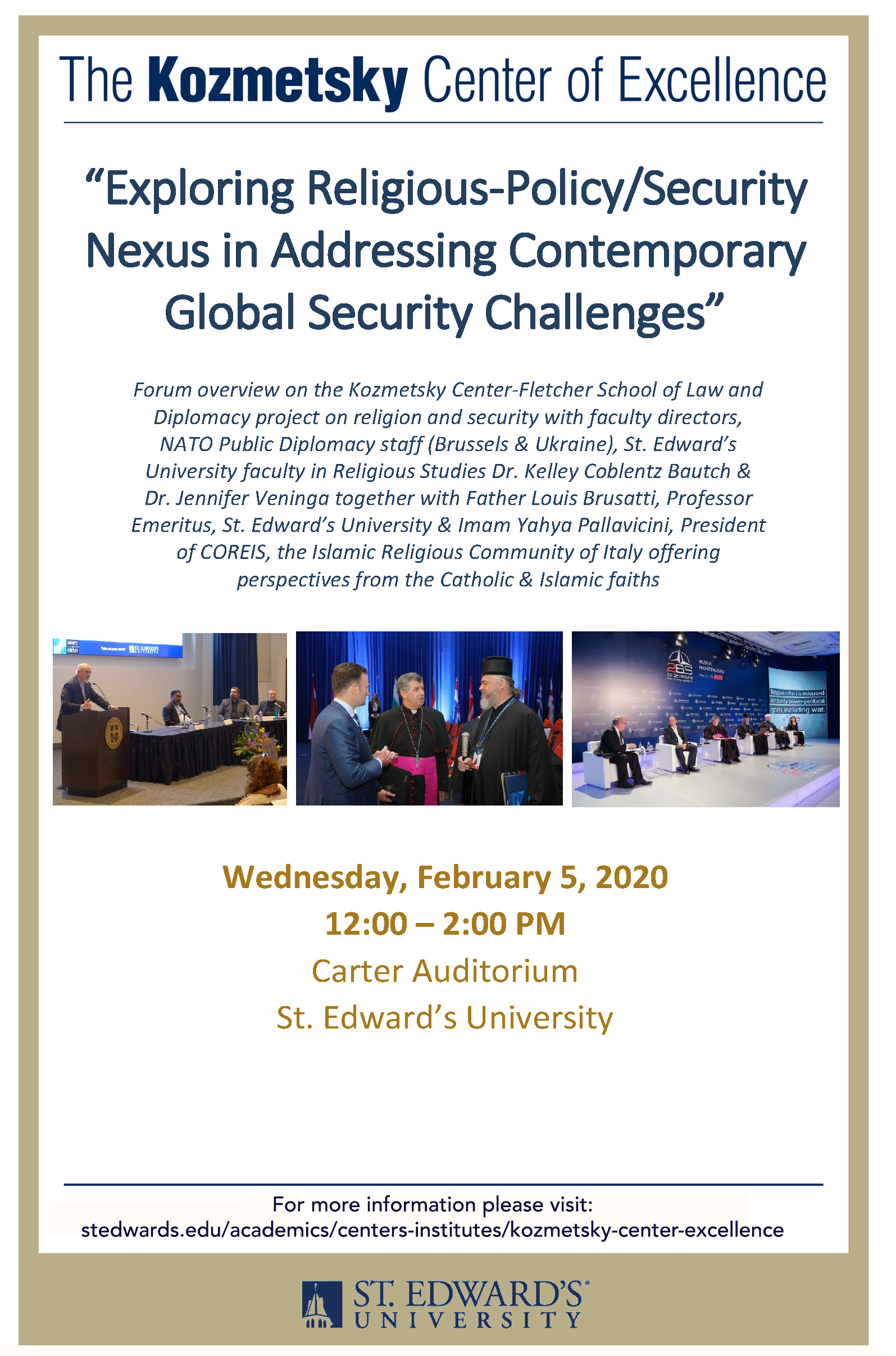 "Strategic Security Challenges in the Middle East: Perspective on a 'Second Arab Spring' and the U.S.-Iran Confrontation

Dr. Ted Karasik, Senior Advisor to Gulf State Analytics and Fellow at the Jamestown Foundation will deliver a lecture on the topic “Strategic Security Challenges in the Middle East: Perspectives on a ‘Second Arab Spring’ and the U.S.-Iran Confrontation.” For the past 30 years, Dr. Karasik worked for several U.S. agencies involved in researching and analyzing defense acquisitions, the use of military power, and religio-political issues across the Middle East and Eurasia including the evolution of violent extremism and financing networks. From 2006 until 2016, Dr. Karasik lived in Dubai, UAE where he worked on Arabian Peninsula foreign policy and security issues surrounding cultural awareness, cybersecurity, maritime security, counter-piracy, counter-terrorism, and infrastructure and national resilience. Dr. Karasik was formerly a Senior Political Scientist in the International Policy and Security Group at RAND Corporation serving as Director of Research for the RAND Center for Middle East Public Policy.  He earned his PhD in History from the University of California, Los Angeles in four fields:  Middle East, Russia, the Caucasus with additional concentration in Cultural Anthropology focusing on tribes and clans from Central Asia to East Africa.  Dr. Karasik has been a frequent commentator for major Arab news media (Al Arabiya, Al Jazeera, Sky News Arabia, and others).  He will share his perspective on the current challenges in the Middle East, the potential of a Second “Arab Spring” and the recent diplomatic and military confrontation between the United States and Iran.  The lecture event is scheduled for Wednesday February 19 from 12:00-1:30 PM in Carter Auditorium in the John Brooks Williams Natural Sciences Center. 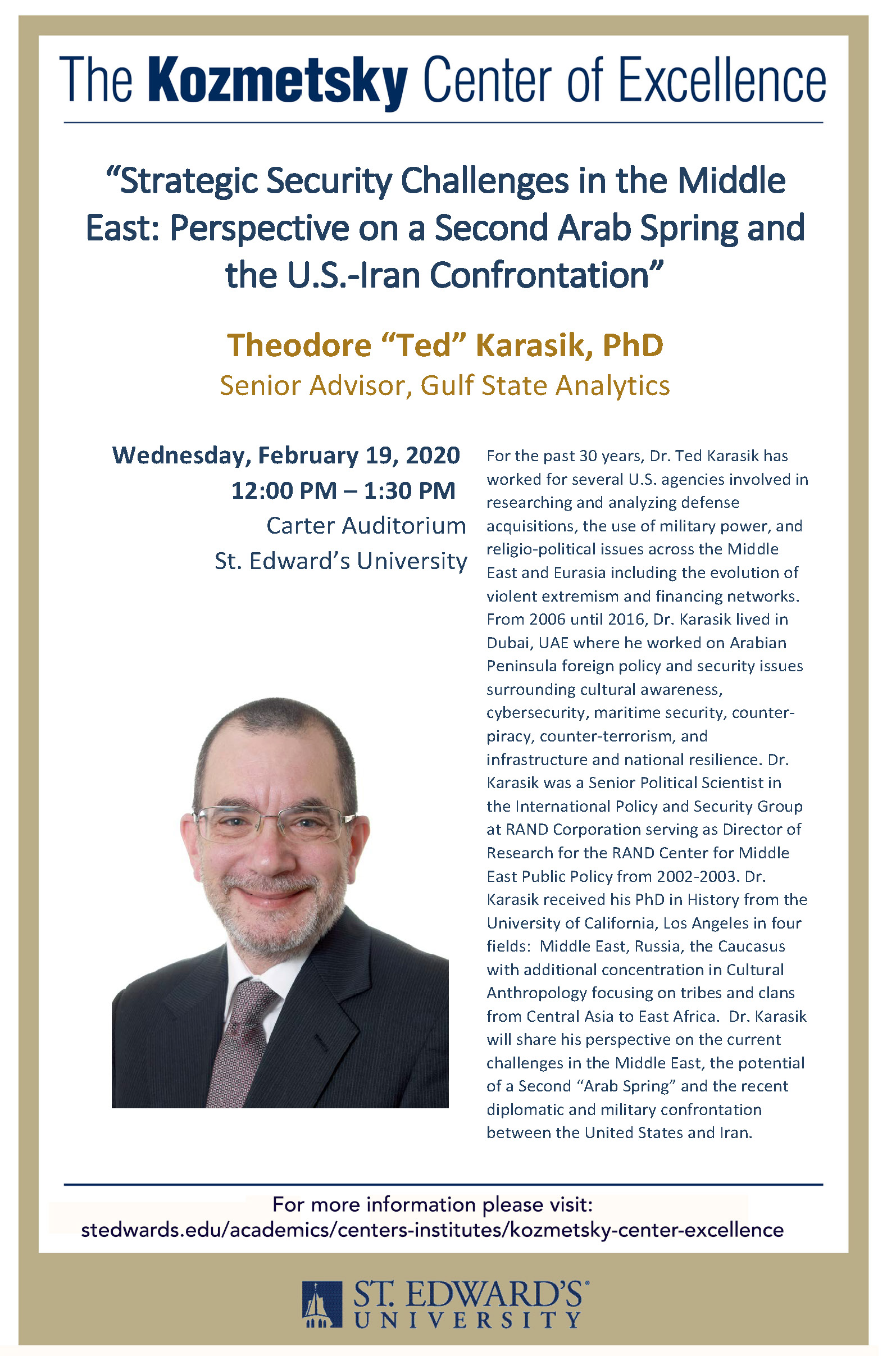 Please check our website [https://www.stedwards.edu/kozmetsky-center-excellence] for additional details on these events, and other activities supported by the Kozmetsky Center throughout Fall 2019. Kozmetsky Center events are free and open to the community.