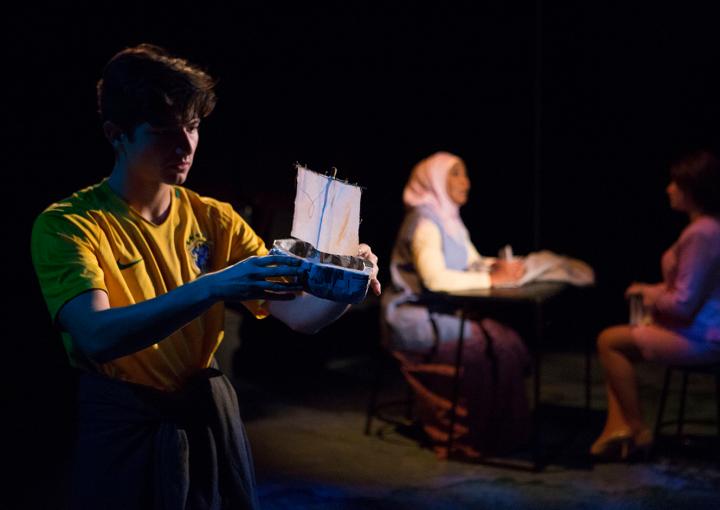 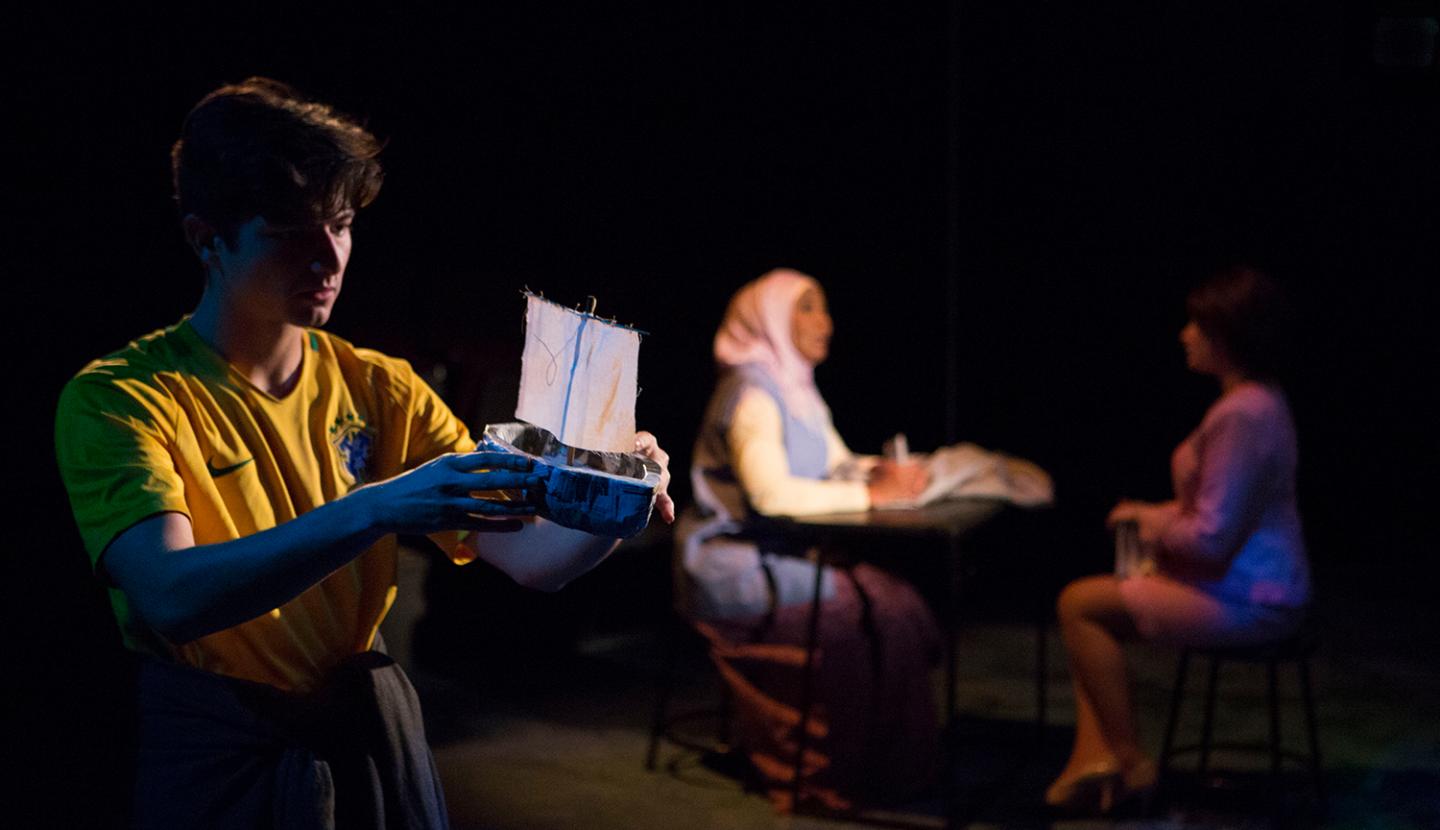 A single mother was pulled over on a traffic stop. She was in the process of applying for asylum in the United States, but she spent a week in jail because she didn’t have the documents to prove it when she was stopped. Another woman applied for asylum but wasn’t able to afford an interpreter, and she came close to losing her case for that reason alone — she got lucky that the officer hearing her case understood her native Spanish, and her case was able to proceed.

Immigration attorney Karen Crawford presented the stories to a rapt audience of the cast and crew of Anon(ymous), this fall’s second show at the Mary Moody Northern Theatre. She explained the difference between asylum and refugee status (it’s based on whether you apply from within or outside the U.S.) and how difficult it can be to complete the application. 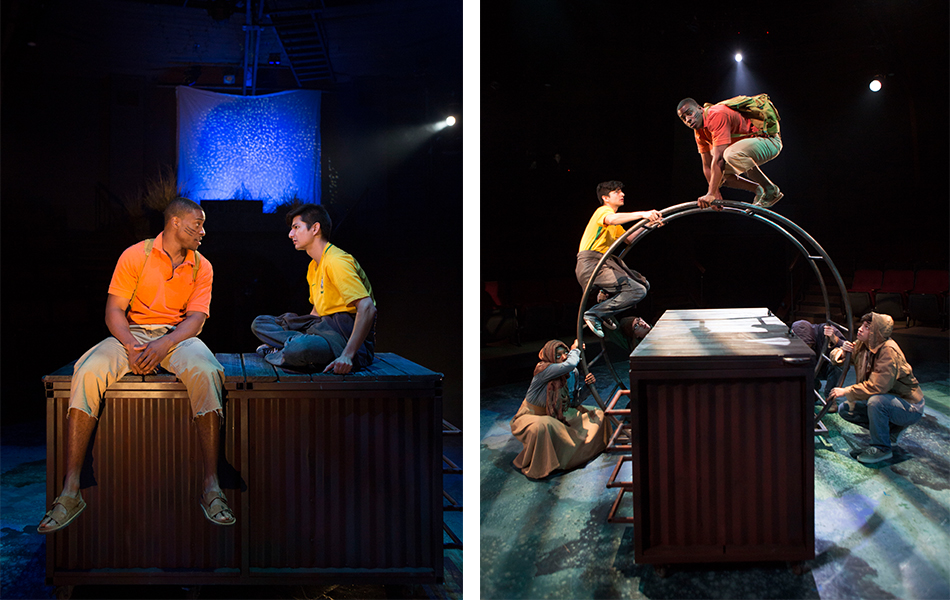 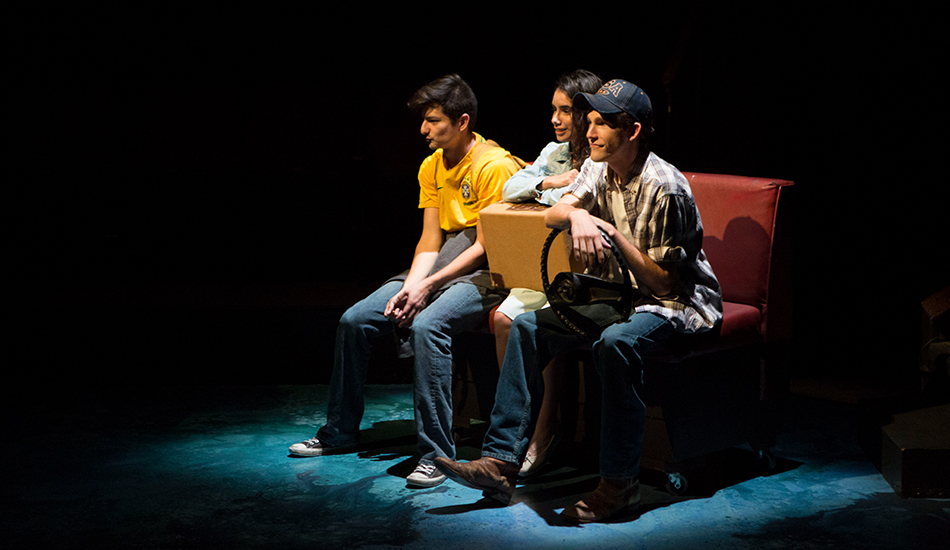 “Hearing all those stories made the issue more human and real,” says Luxy Banner ’18, who plays a goddess in Anon(ymous). “That’s one thing I love about this play: it’s humanizing. The characters aren’t just statistics, or one cookie-cutter image of who a refugee or immigrant is.”

In Anon(ymous) by Naomi Iizuka, teenage refugee Anon is separated from his mother as the two flee their war-torn country for the United States. His journey to reunite with her is filled with characters both realistic and fantastic. The play is an adaptation of Homer’s Odyssey that connects with current events and with the university’s common theme this year, Immigrant Voices.

Managing Director Michelle Polgar, who directed Anon(ymous), invited Crawford to campus to help the cast and crew understand the challenges facing real-life refugees. The stories she shared helped Banner and her colleagues connect their creative work on stage to immigration policy, and to the university’s mission to confront the critical issues of society and seek justice and peace. Theatre, too, can put a face on complicated issues, Polgar says.

“It’s so easy for us to talk about immigrants and refugees as part of a whole body of ‘others’ but lose sight of the individual,” she says. “In this show, my goal is to keep the focus on the individuals.”

By telling the story of one fictional immigrant, the team behind Anon(ymous) invited the audience to think about refugees and immigrants in a new way. Theater has the power to open people’s minds, says Jackson Pant ’20, who plays the Cyclops character.

“Our plays don’t just serve to entertain people,” he says. “When we produce them, we want people to think. There’s no better feeling than knowing that our work is purposeful — than going out after a show and hearing people in the lobby talking to each other and asking questions and truly being curious about what they saw.”

Welcoming Your Student Home for the Holidays