How a love of science, rapping, music and service paved the way

Give Amy Ontai ’17 the length of a sitcom and she’ll rap, play an original song on the ukulele, nail a British accent — and easily explain genetic sequencing and the structure of DNA. Those are among the talents she brought to Fly Sci with Amy Ontai, a show she created last year for her senior thesis. A Biology major and Education minor, Ontai often found herself discouraged during her student-teaching semesters that kids found science esoteric, difficult and (worst of all) boring. 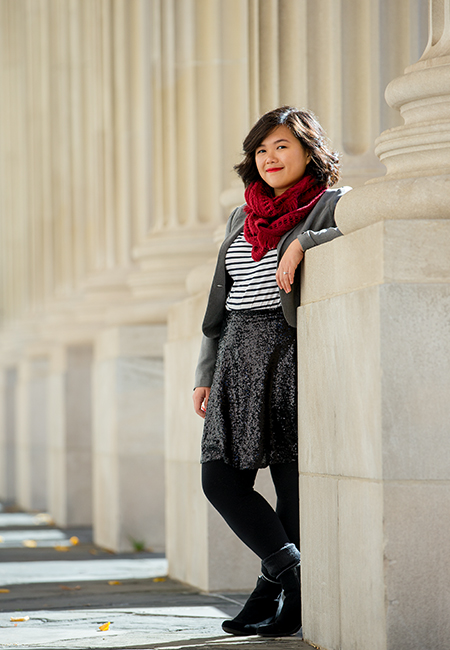 “Science should be fun and interactive,” she says. “I wanted to make a show like Bill Nye, the Science Guy, which I loved as a kid, but instead of Bill Nye, what if it was me?”

With guidance from a seventh-grade mentor teacher at Austin’s Covington Middle School, she wrote, filmed and produced two full episodes and a trailer using equipment from the Munday Library, along with the GarageBand and iMovie apps. She presented the first episode at the Austin Area STEM Conference spearheaded by Associate Professor of Secondary Education Steven Fletcher and completed the second the following semester.

As a junior, Ontai became part of McNair Scholars at St. Edward’s, which supports minority groups typically underrepresented in doctoral programs. She studied soil ecology, presented at the Annual Biomedical Research Conference for Minority Students in Tampa, Florida, and assisted professors in molecular biology classes and freshman biology labs. “Through McNair, I saw how much diversity actually benefits research as a whole,” she says. “If you diversify the backgrounds of people asking questions, you diversify the answers to those questions.”

Even with her impeccable résumé, Ontai says she still occasionally feels like an imposter at Yale. “It’s tough. There are a lot of people around me who are smarter and more well-read than I am,” she says. “But one of the most important things my college experience taught me is that I do belong here. It helped me realize that being a minority woman at Yale is not only a great accomplishment for me but for minority women in STEM everywhere.”

Being comfortable in her own skin — and thankful for her talents — is a theme reinforced by her student-assistant job in Campus Ministry. “It was my second home and one of my biggest sources of encouragement,” says Ontai. When she found out about her acceptance to Yale, Administrative Secretary Medina Bills and Associate Director Liza Manjarraz were two of the first to know. “I ran into Liza’s office and started screaming and jumping up and down,” she says. “And Father Peter [Walsh, CSC, who directs Campus Ministry but once worked at Yale’s Saint Thomas More Catholic Chapel and Center] still sends me advice on where to get good pizza and lobster rolls in New Haven.”

Learn more about the Teacher Education major and minor.

Hilltop Seniors on the Move