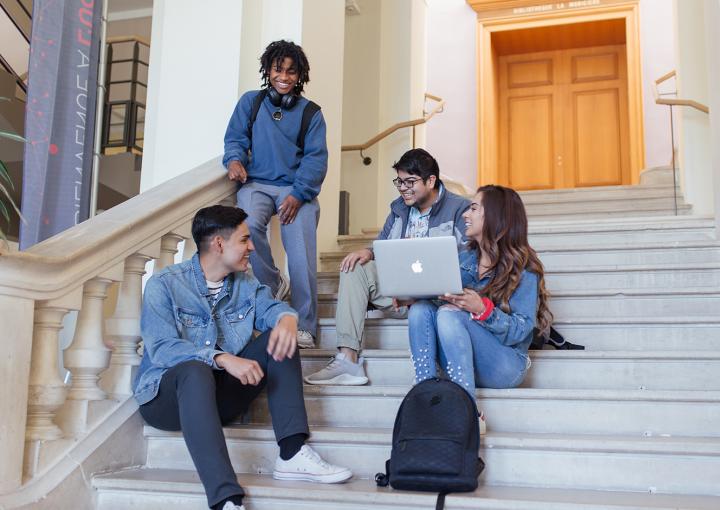 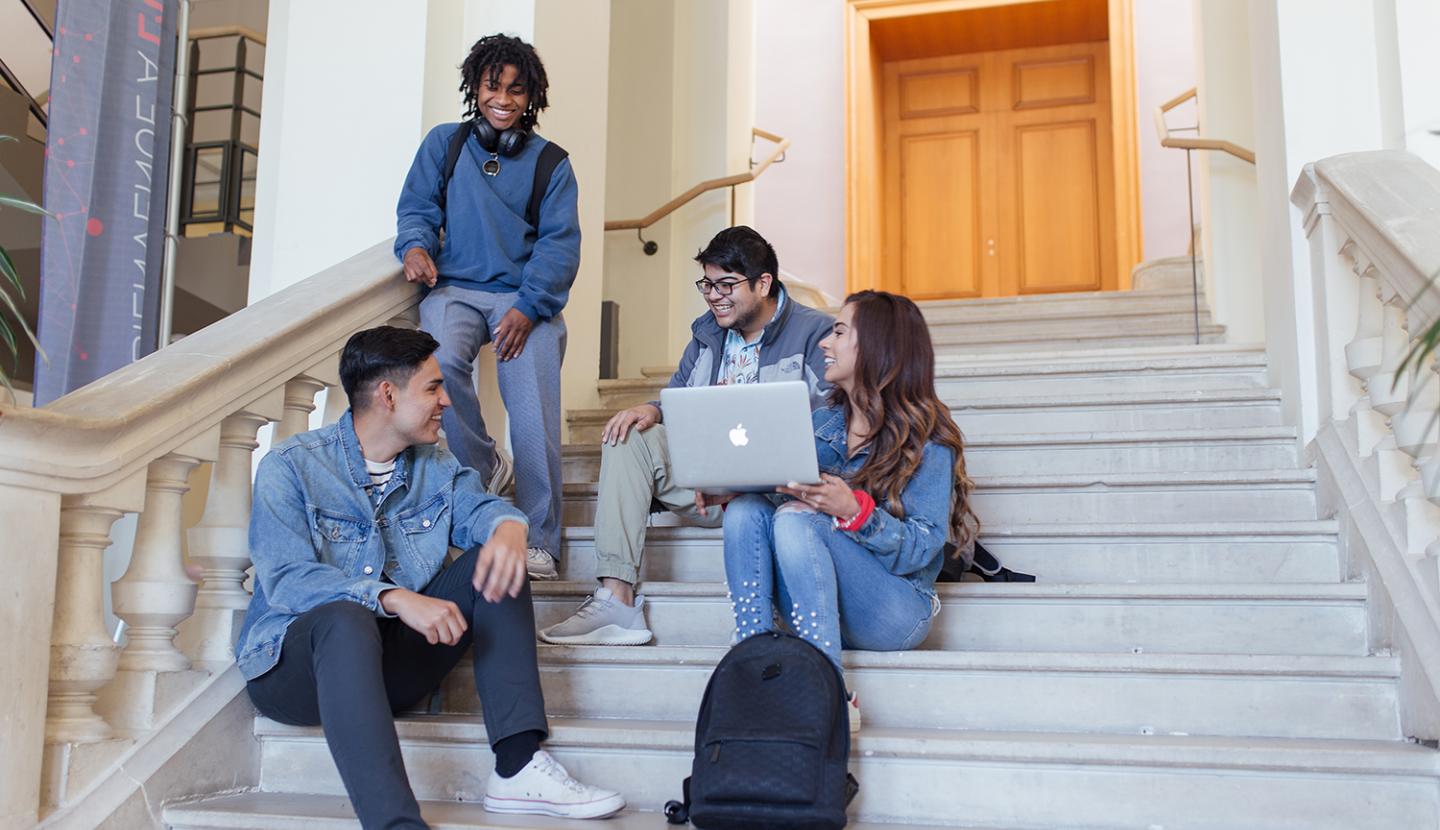 On a typical weeknight, Stephen Reyes ’21 eats dinner with his host family in Angers, France. Everyone reports on their day: Reyes; his host parents, Sophie and Romain; and their 12-year-old twins, Augustin and Anatole. The conversation begins in French but occasionally meanders into English or Spanish if Reyes is having trouble keeping up. After dinner everyone gathers in the living room to play cards or dominoes.

Reyes considers his host family vital to his study abroad experience at Université Catholique de l’Ouest ― the St. Edward’s flagship partner university in Angers, France. “They have welcomed me with open arms,” says the International Business and Digital Media Management major. “I consider them my second family.”

In addition to French, Reyes is taking Culinary and Economic Botany with Professor of Biology Bill Quinn. The class has visited local gardens, vineyards and even the “troglodytes,” caves in the Loire Valley where locals cultivate mushrooms. In his Intercultural Communication course, taught by Professor of Business Communication Catherine MacDermott, he’s studied the French economy, the country’s attitudes toward the environment and its business practices. “We talk about how to adapt to other cultures to be successful abroad,” Reyes says. 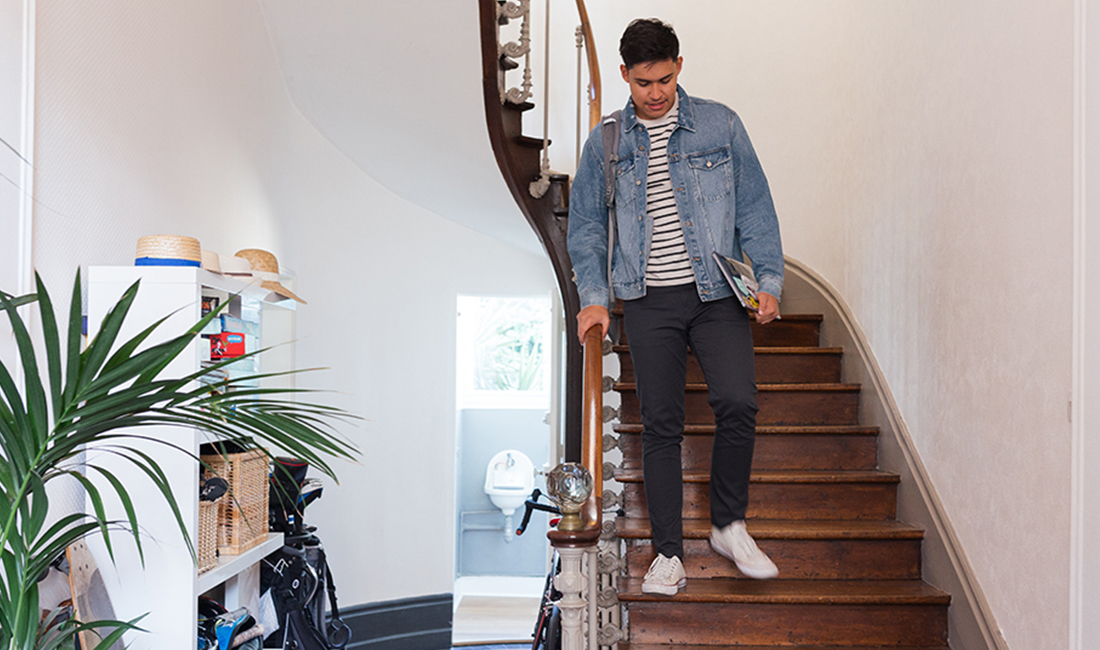 The French have no qualms about talking politics with people they’ve just met, which Reyes says was jarring at first. “Every French student, every French person you meet, they’re always asking, ‘How do you feel about your president?’” he says. “They love talking about it.” Now he starts his day with a political discussion over breakfast. Almost every morning Reyes is joined by his host mother, Sophie, who’s already listened to the day’s news on the radio and asks him for his perspective.

Reyes has adapted to another French practice: the two-hour lunch break. Accustomed to eating quickly between classes, he initially marveled at the Universite Catholique de l’Ouest students who lingered over sandwiches in the park. Now he takes advantage of the break and rides the bus from campus into downtown for lunch at his favorite café, the Empanada Factory. The owner, Camille, starts making his regular order as soon as he comes in the door.

On the weekends, Reyes explores other parts of France. The 32 St. Edward’s students have traveled together to Omaha Beach and the American cemetery in Normandy; the port city of St. Malo; and the gothic abbey on the tidal island Mont-Saint-Michel. Reyes and his best friend, Melvin, have visited Paris and nearby Nantes, where his host family’s older children attend college.

Reyes says his time in Angers has helped him feel more open-minded, responsible and confident. “I was too shy to participate in class my freshman year, but now I have confidence to voice my opinions to my professors,” he says. 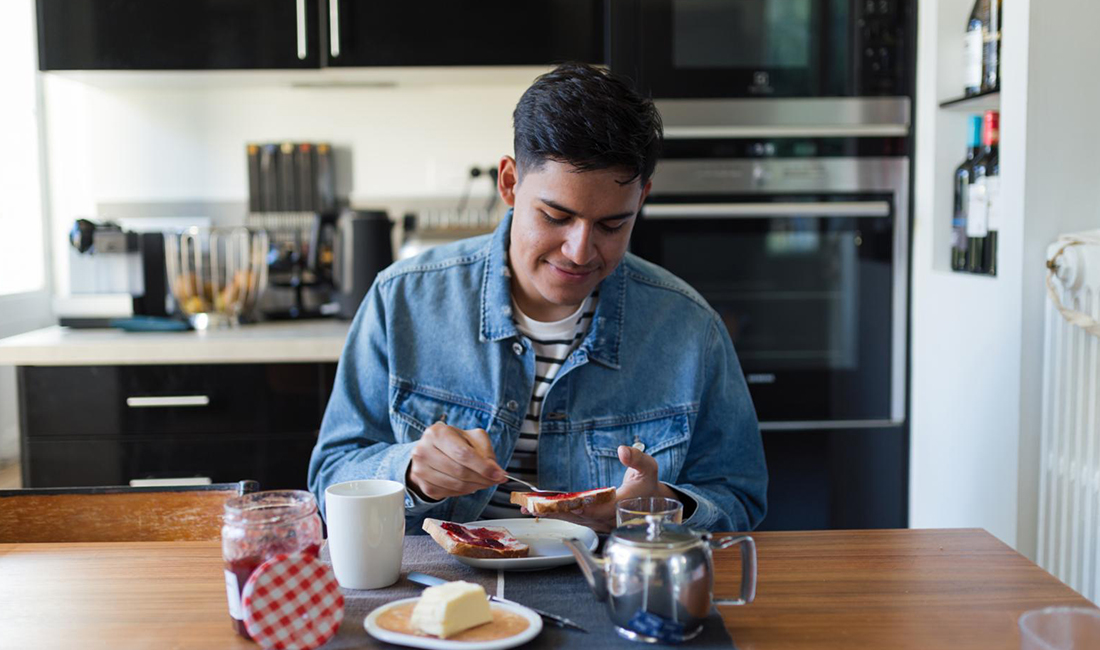 Breakfast is usually bread with Nutella or butter and jam, plus a pot of tea. 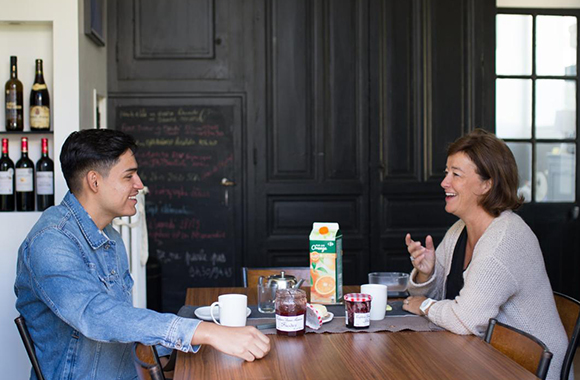 Reyes’ host mother, Sophie, joins him for breakfast every morning, and they discuss the day’s political news. 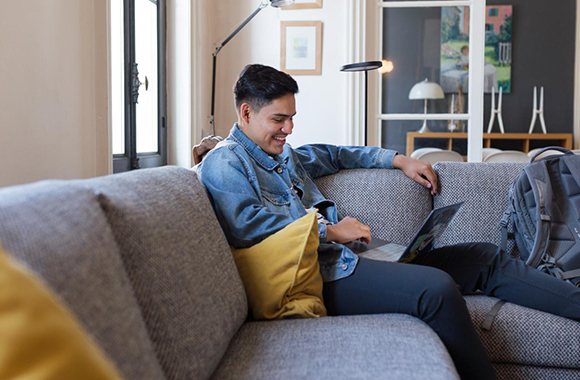 In the living room, Reyes answers email, goes over his schedule for the day, and checks the news from home in the Austin Business Journal 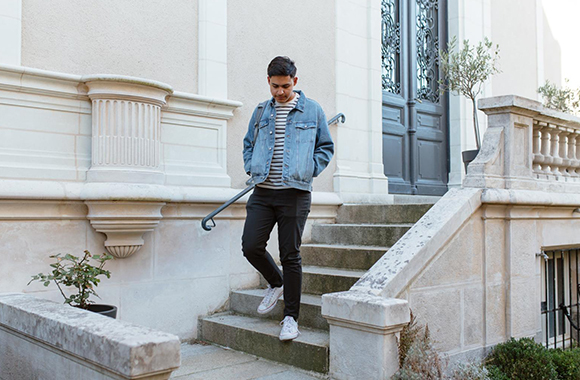 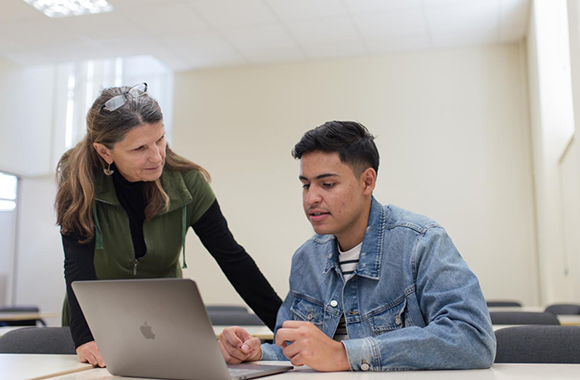 In Professor of Business Communication Catherine MacDermott’s Intercultural Communication class, Reyes learns how to adapt to other countries’ business environments. 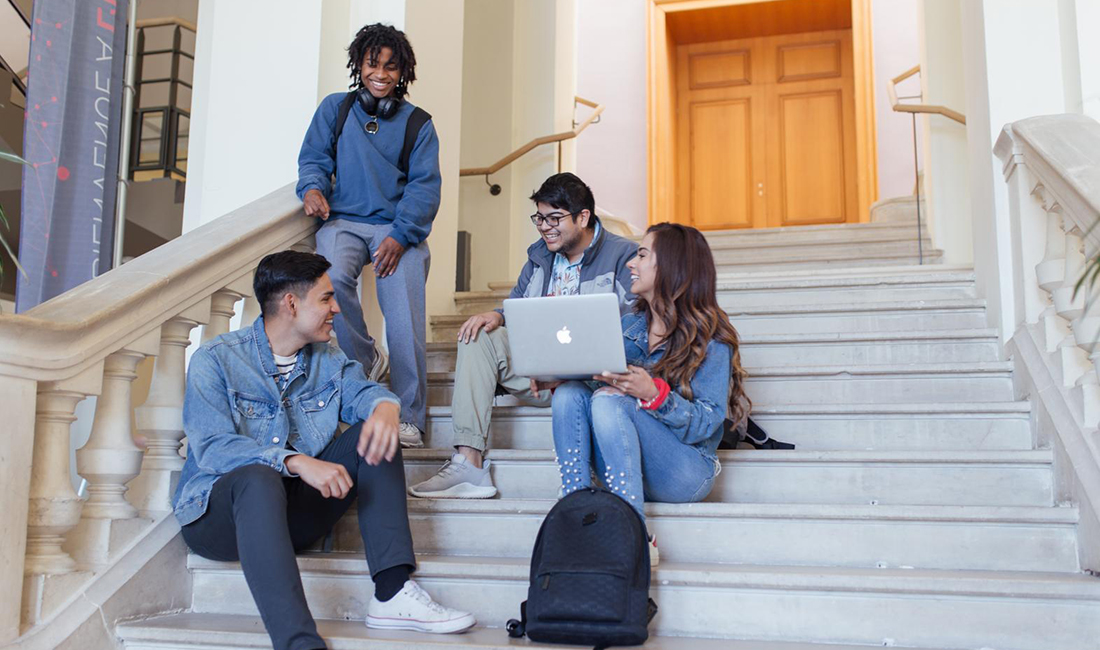 Reyes and his classmates Lynnwood, Daniel and Dariela go over their resumes and mock interviews for Business Communication. 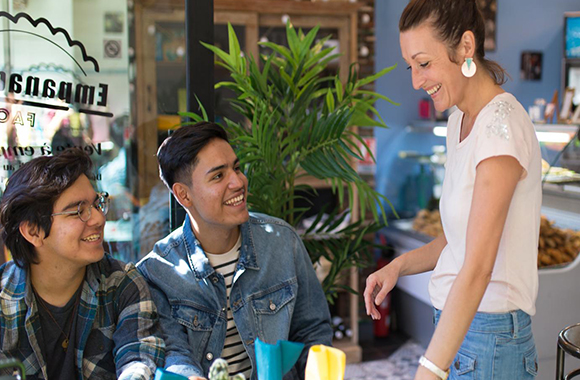 The owner of the Empanada Factory starts preparing Reyes’ order — a Mexicano and a Carne Picante — as soon as he walks in the door with his friend Melvin. 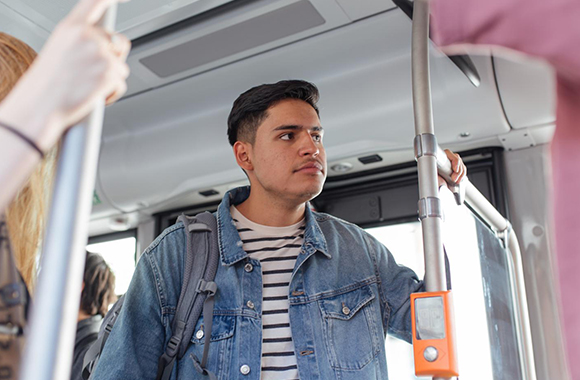 Riding the bus and tram in Angers has opened Reyes’ eyes to the environmental benefits of public transit — despite the frequent strikes by French transit workers. 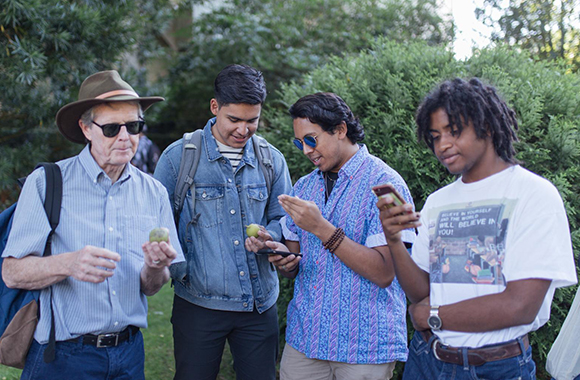 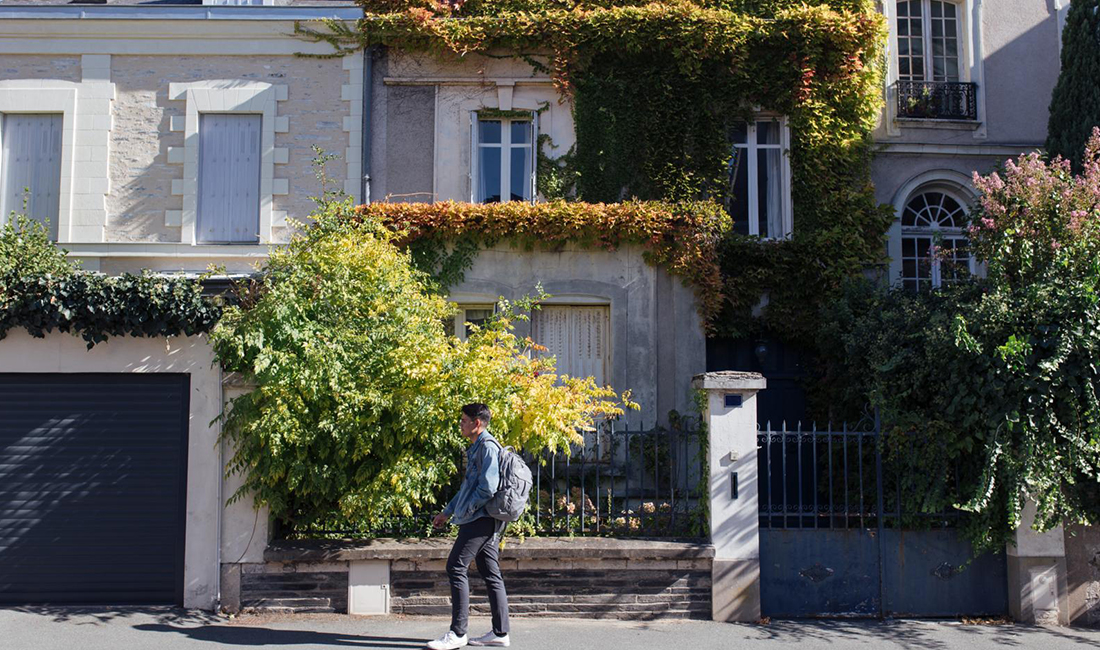 After class, Reyes walks back to his host family’s spacious home. 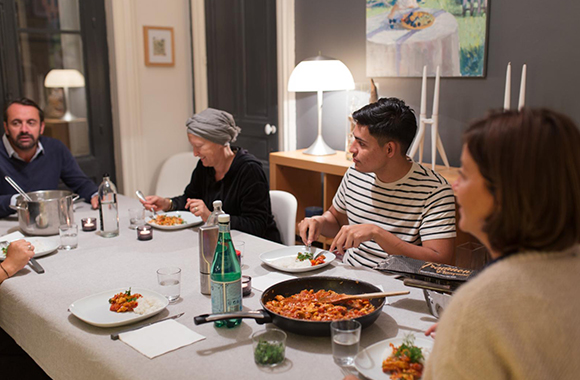 Reyes eats dinner with his host family three times a week, and after dinner everyone plays cards or board games. 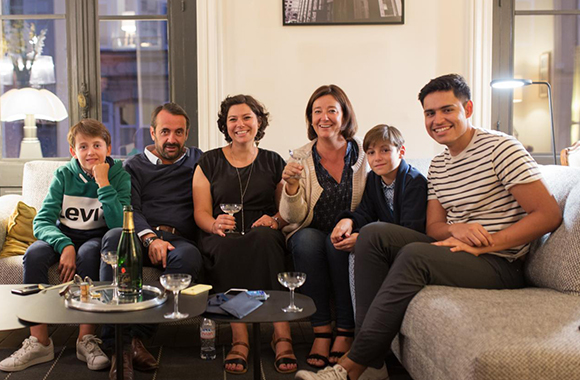 When his host mother’s relatives come to visit, Reyes is included in the meal and conversation, just like a member of the family.

Photography by Joshua Rios ’19, Biology major
Rios has a passion for science and photography. See how he explores both at St. Edward’s. 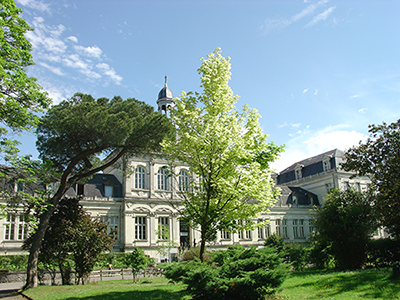 St. Edward’s has study-abroad exchange programs with more than 20 universities across the globe. Université Catholique de l’Ouest (UCO) is our flagship partner university in Angers, France, and hosts approximately 12,000 students from 60+ countries each year. Students and professors at St. Edward’s can spend a summer, semester or year studying and teaching in Angers.