Shannon Ung explores the genocide that changed Cambodia and her family 39 years ago. 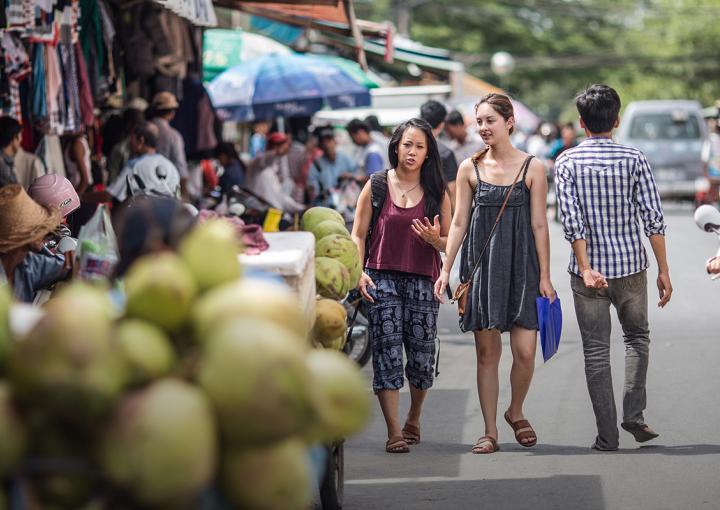 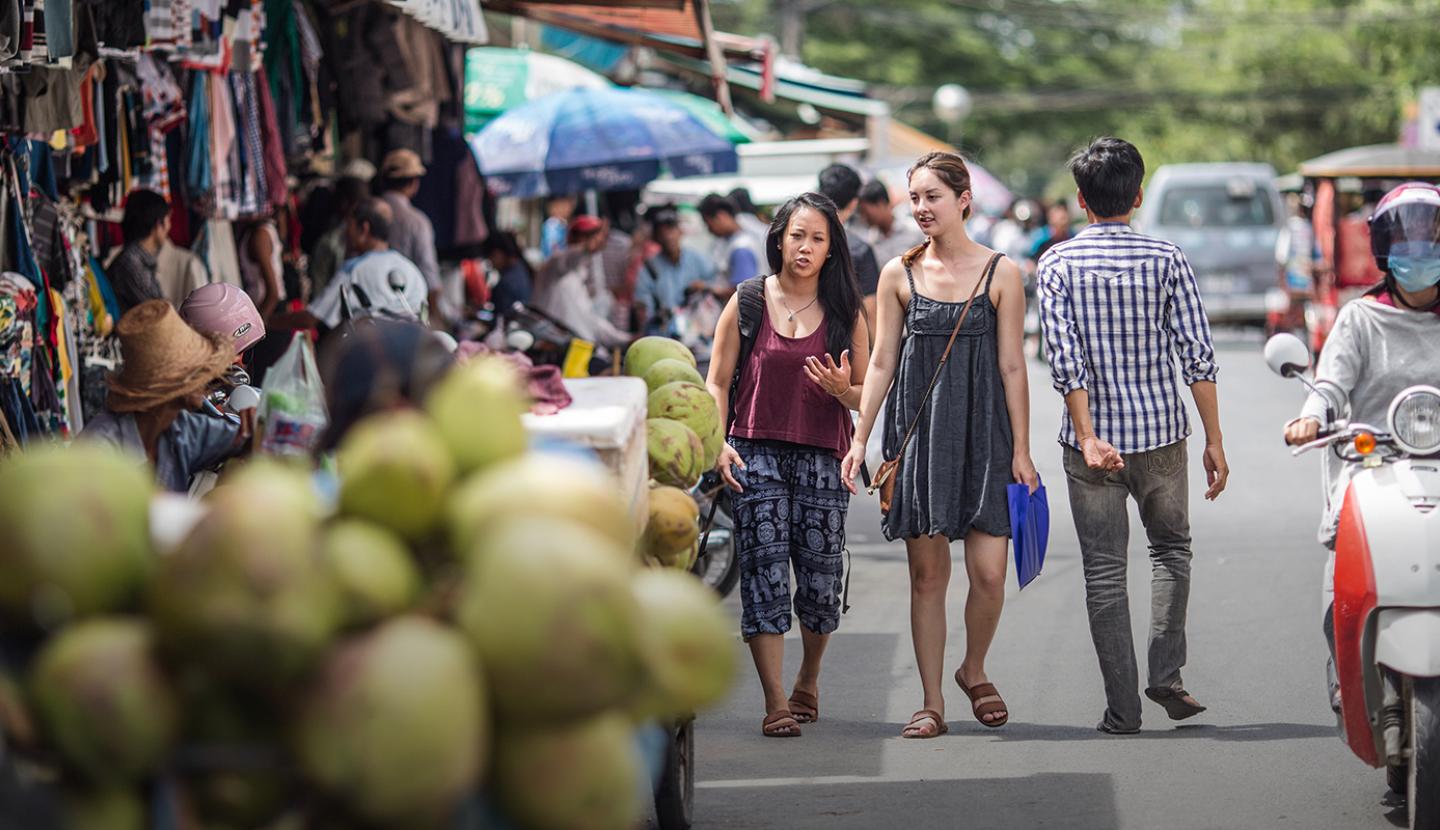 Shannon Ung ’15 clicks through the family photos she’s scanned and loaded on her Mac — her mom as a teenager visiting Pikes Peak, her dad at the Golden Gate Bridge, her parents’ Hong Kong honeymoon. She stops at an old black-and-white photo.

Ung’s dad, about 8 years old, stands with hunched shoulders and curious eyes next to a young cousin in a striped sun hat. Another cousin, a teenager in flip-flops, poses with his hands on his hips. On the right the family matriarch stares ahead, her scarf as steadfast as she is. Twenty-three relatives and friends in all gather for the souvenir snapshot in front of the ancient Angkor Wat temple in Cambodia.

The photo was taken in 1968, just seven years before Communist dictator Pol Pot took control of the country and began a genocide campaign that would ultimately claim the lives of 1.7 million people — immigrants, intellectuals, anyone who spoke a foreign language or wore glasses, anyone who might disagree with Pot’s ideology. No one in Ung’s family picture had any idea that within a decade of the shutter clicking, two would be executed, two would die from starvation and the rest would be driven from their homes into labor camps in the Cambodian countryside.

Ung’s mother’s family also suffered under Pot’s regime. Khmer Rouge soldiers marched her maternal grandfather out of his house at nightfall. Presumably shot and buried in a mass grave at one of Cambodia’s notorious “killing fields,” he was never seen again. Because they wanted his bicycle, soldiers strung her uncle to a post overlooking a dam where he died from dehydration. And when her mom was only 13 and her dad was 17, they were forced into the labor camps, where they did brutal work with few breaks, survived on meager bowls of soup and rice, and faced daily threats of execution for the slightest infraction.

Ung’s family rarely talks about its horrific past, but that makes it all the more palpable, she says. “Ever since I remember having a memory, I have known about what happened.”

And in recent years, she has yearned to know more — about her family, Cambodia, and the random luck that saved her parents from the killing fields and eventually led them to Houston, where she was born. “I can’t help but think that if anything at any point in time had been different, I could be living in Cambodia,” she says. “Or be living in poverty, or be working in the rice fields, or never have been born. It’s just a matter of circumstance.”

Ung traveled to Cambodia for the first time in June, thanks to a Summer Academic Excellence Award from St. Edward’s University. The awards — 14 were given this year — are designed to encourage in-depth independent research and make the university’s top students even more competitive for graduate-school scholarships and fellowships. With a stipend to cover travel, board and other expenses, Ung spent three weeks meeting and interviewing extended family members who had survived Pol Pot’s regime, visiting execution sites and former prisons, and experiencing firsthand the country her parents fled some 30 years ago.

Ung, a Global Studies major, had taken Politics and Governments of Asia, a class on Asian countries and their intricate and fraught relationship with each other and the United States. She had written papers and given presentations on Asian literature, film and society. Her work caught the attention of Assistant Professor of Global Studies Jooyoun Lee, who served as a reference for Ung’s Summer Academic Excellence Award application. “Shannon’s academic passion has been so clearly influenced by her family background,” says Lee. “Having a personal interest in a subject is a great way to make connections to the world, to get mobilized and motivated.”

But little of Ung’s academic success prepared her for walking the streets of the capital city of Phnom Penh, where naked children beg on dusty street corners and vendors hawk everything from pig heads to miniature Buddhas. She also wasn’t prepared for the beauty — carts stacked with ripe mangoes and rambutans, the brilliant gold and red spires of Buddhist temples, bright white lotus flowers, and deep green sugar palms.

That juxtaposition kept her up at night. “The most emotional times were before bed, when I was trying to fall asleep,” she says. “I couldn’t stop thinking about what I had seen that day, the beauty and poverty and sadness that is everywhere.”

Caroline Morris, director of the Fellowship Office at St. Edward’s, had counseled Ung on what she might experience and how to cope with it. She encouraged her to have a friend accompany her (Ung’s roommate Jackie Stagg ’15 traveled with her) and to gather raw material while she was there instead of focusing on a polished product like a blog or essay. “Shannon is very academically strong and emotionally brave, but I knew she would need time to absorb and reflect,” she says. “During her trip, I found myself sitting up at night and wondering if she was doing okay.”

Ung handled the gut-wrenching three weeks by writing, taking pictures and crying when things got overwhelming, like when she saw the 9,000 skulls on display at the Choeung Ek Genocidal Center. Each has a brightly colored sticker on it that corresponds to a particular cause of death — machete, hammer, bamboo spear and, occasionally, bullets, which were expensive and rarely used by Khmer Rouge soldiers.

“Even having seen Choeung Ek with my own eyes, I find it nearly impossible to comprehend such a crazy time when such crazy people were put in power,” Ung says. “People were brainwashed and scared. Life was reduced to nothing.”

As Ung wandered the Choeung Ek compound and listened to the audio tour, she tried to reconcile the lush and tranquil grounds with the atrocities that had taken place there under Pol Pot. At the height of his despotism in the late 1970s, some 300 prisoners arrived each night at the killing field for execution. Under fluorescent lights and with patriotic music blaring to cover the sounds of screams, soldiers hacked the prisoners to death or near-death, dumped the bodies into giant pits, and covered them with DDT powder to finish off any survivors. Then, the Khmer Rouge guards shoveled dirt and grass over the bodies and prepared a new pit for the next truckload of prisoners. Still today, heavy rains unearth bone fragments and scraps of clothing.

“You take this tour, you go to a monument or figurine with a number, and you push that number to listen to this unreal and horrific narration,” she recalls. “Putting those stories together with my parents’ stories was really overwhelming.”

Before she visited Choeung Ek, Ung traveled to Kampong Chhnang in central Cambodia to interview her great aunt, who lost her husband and two children to sickness during Pol Pot’s tyranny. She expected the language barrier to be difficult — Ung’s family members are Chinese emigrants who settled in Cambodia and speak a different dialect than the Mandarin she learned at Chinese school in Houston. What she didn’t anticipate was her own guilt for bringing up such terrible memories.

“Asking questions was really difficult. It seemed invasive, almost,” says Ung, who also spoke with her great uncle, aunt and second cousin. “Most of my family would rather not talk about it at all than remember and be sad.” But coupling the stories her relatives did share with what she saw at museums like Choeung Ek helped her put the pieces together. Morris is not surprised. “Shannon completely understands the interaction between larger historical forces and individual personal stories. That’s rare in anyone, but it’s really, really rare in someone so young,” she says. “Shannon sees how things like genocide and survival and resilience and family are universal qualities, as opposed to something that happened ‘over there.’”

And for Ung, what happened in Cambodia has shaped every moment of her life “over here” in the United States. “My ancestors are Chinese. My parents are Chinese-Cambodian. I’m Chinese-Cambodian-American. Growing up, I always felt like I had to change my story or hold things back,” she says. “There was never a place constructed for me.”

After Pol Pot was overthrown in 1979, Ung’s family moved from the labor camp to refugee camps in Thailand and the Philippines, where her parents first met. Eventually, they were granted asylum in the United States and connected with other relatives who had already resettled stateside — her mother’s family moved to Denver, Colo., and her father’s side resettled in Houston. Her father soon moved west and found work washing dishes in San Francisco’s Chinatown district; Ung’s mother joined him there and they married in 1989. After the Loma Prieta earthquake that fall, they moved to Houston and opened a restaurant. Ung’s brother was born in 1990, and she was born in 1993.

Raised Buddhist like her parents, Ung and her brother attended academically rigorous Catholic schools, where her mother met personally with administrators to tell the family’s story and arrange scholarships. Ung also attended Chinese school, took piano lessons, ran cross country, and played volleyball and softball. She did homework in a booth at her aunt’s donut shop and in the backseat of the car on delivery runs for her dad’s restaurant. And she heard her mom’s stories day in and day out — “little stories, never a big reveal and always with a moral, like respect your elders, work hard in school and take advantage of these opportunities you’ve been given.”

Ung responded to the pressure by disobeying and fighting with her parents. “I resented the fact that everything about my mom and dad’s life was so different from my life. I felt a lot of pressure to do my part to be their successful daughter but also to fit in with my school friends and my neighborhood friends,” she says. “All I wanted to do was wake up and watch one cartoon on Saturday morning, but the answer was always no — I had to go to lessons or study.”

Enrolling at St. Edward’s changed all that for Ung. “I didn’t do well in high school — I was my own deterrent. But once I got to college, I felt like that pressure to succeed was not all-encompassing anymore,” she says. “I took a step back and realized the work ethic I had gotten from my parents.”

That ability and desire to work hard has led Ung to achieve a 3.8 GPA — and a very good shot at a graduate fellowship or scholarship in public policy or international relations. “Shannon’s academic interest in Asia stems from trying to understand her parents’ experiences and how different they are from her experience and that of her brother,” Morris says. “She is incredibly open to differences of all kinds — partly because she has lived on the borders of these two cultures for so long.”

Understanding more about those boundaries and learning to negotiate them more effectively was a big reason for Ung’s trip to Cambodia. “Shannon knew she wasn’t really going to be able to bridge that divide until she went there,” says Morris.

Lee agrees. “I don’t think this trip is the endpoint of her academic passion. It has simply given her more thoughts on what can be done and what role she can play.”

Since her return, Ung has put together a slideshow of photographs she took on the trip. She’s editing the journal entries she kept and hoping to expand them into something bigger, like a memoir or thesis. And she’s applying for a Fulbright English Teaching Assistant grant — to Cambodia. “I feel a lot more complete and whole knowing about my family and how that time played a role in all of our lives,” she says. “My hope is that I can continue getting to know Cambodia in ways that transcend the trauma.”