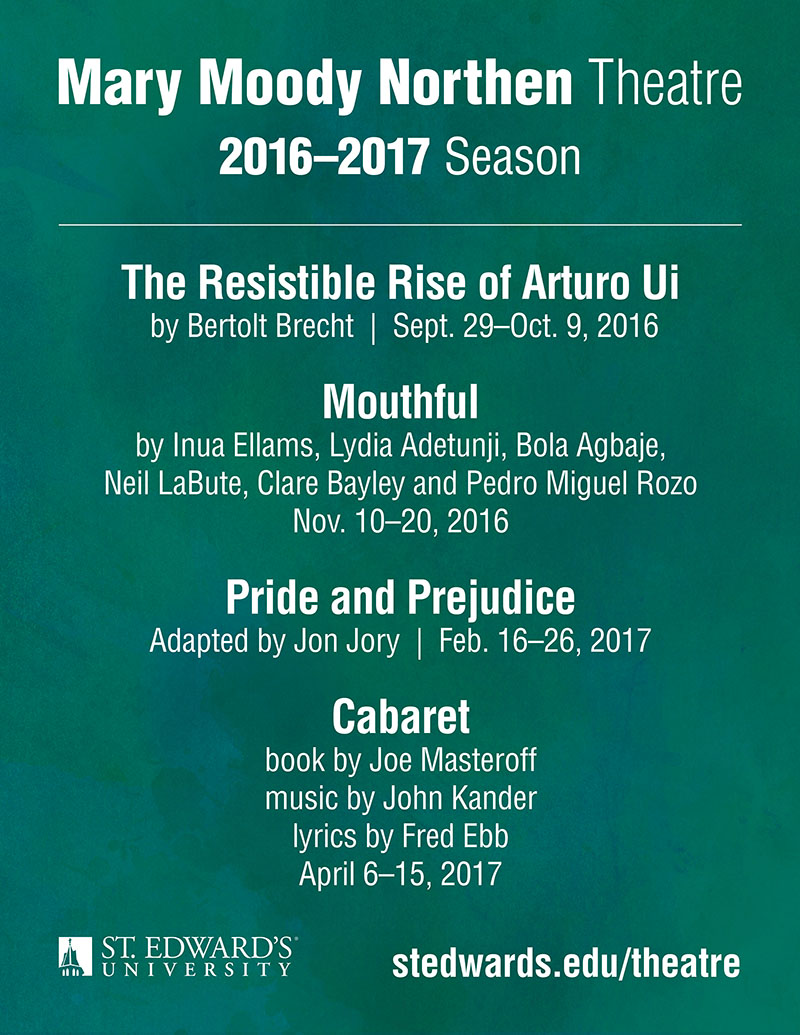 Mary Moody Northen Theatre, the award-winning producing arm of the St. Edward’s University theater training program, announces its 2016-2017 season, featuring four plays ranging from classic to contemporary. Join us for our 44th annual season and share in the fun and excitement at the theater on the hill!

The Resistible Rise of Arturo Ui: A Gangster Spectacle

Welcome to gangster-era Chicago, where the Cauliflower Trust is having a tough run. Enter the wannabe racketeer Arturo Ui. He and his hoodlum henchmen are looking for a little action, and running a “protection” campaign for the Trust looks like a golden opportunity. But power is tasty, and Ui quickly looks to expand his influence. Described as "American gangster movie meets Richard III," Brecht's wildly theatrical satire parallels Hitler's rise to power and gets a bright, fresh telling in the hands of award-winning director David Long. Part farce, part spectacle and part siren warning, The Resistible Rise of Arturo Ui paints a chilling portrait of the dangers of unchallenged corruption. This theatrical tour-de-force features guest artists Amy Downing and David Stahl. Advisory: Adult Themes.

Six of the world's leading dramatists in partnership with six world-renowned scientists combine their talents to create this imaginative, politically provocative response to the global food crisis. The short plays blend diverse voices to create vital conversation. Meet Ruth, who, despite her father's warning, spends her savings to establish an organic carrot farm in Colombia. Explore the powerful imagery of a single baguette. Consider what you might trade for a glass of water. Mouthful is an intimate and compelling exploration of the careful path we must tread in the face of rising populations and shrinking resources. Food for thought, indeed. A U.S. premiere.

“Pulls out all the stops.” The Times

Based on the novel by Jane Austen

Jane Austen's 1813 novel with all of its wit and romance comes to life in this fast-moving and high-spirited update. Join the singularly focused Mrs. Bennet as she struggles to marry off her five daughters, sometimes in direct conflict with her daughters' wishes. Enjoy the fireworks between the quick-witted, fiercely independent Lizzie Bennet and the handsome, enigmatic Mr. Darcy. Should feelings triumph over good sense, and can you trust your assumptions? This classic romance features guest artists Mary Agen Cox, Babs George and David Long. As Orlando Theater exclaims, "Fiction doesn't get any better than this."

Book by Joe Masteroff, music and lyrics by John Kander and Fred Ebb

"There was a cabaret, and there was a master of ceremonies, and there was a city called Berlin in a country called Germany. It was the end of the world." One of America's most powerful and well-loved musicals, Cabaret premiered at the Broadhurst Theatre in 1966 and earned 10 Tony awards, sparking Bob Fosse's 1972 film and a 1998 Tony award–winning revival. Fifty years later, it appears on the intimate MMNT stage. Willkommen. Bienvenue. Welcome. Advisory: Adult Themes.

“One of the great musicals of all time. Exhilarating!" Time Out New York

All performances are at 7:30 p.m. Thursday–Saturday and 2 p.m. Sunday, with the exception of Cabaret, which adds a Saturday matinee on April 15 in lieu of an Easter Sunday performance.

Season passes go on sale Aug. 22 through the MMNT box office at (512) 448-8484 and are available online at http://www.stedwards.edu/theatre. Single tickets for each production go on sale three weeks prior to opening and may be purchased through the MMNT box office or the website. Box office hours are 1–5 p.m. Monday–Friday when classes are in session and one hour prior to curtain. Group rates for 10 people or more are available. Information: 512-448-8484

St. Edward’s University is a private, liberal arts college in the Catholic Holy Cross Tradition with approximately 5,000 students. Located in Austin, Texas, it is one of the top universities in Texas and offers undergraduate and graduate programs, including MBA programs and a master’s degree in counseling. With a network of partner universities around the world, St. Edward’s is a diverse community with programs designed to inspire students with a global perspective. St. Edward's University has been recognized for 12 consecutive years as one of "America's Best Colleges" by U.S. News & World Report and ranks in the top 15 Best Regional Universities in the Western Region. Information: stedwards.edu/about.