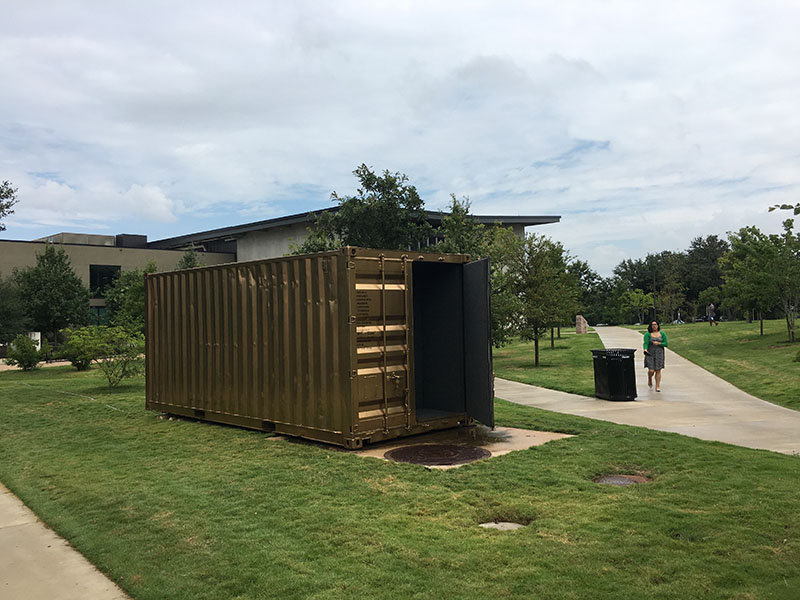 Portals, a project of Shared Studios, are gold shipping containers equipped with immersive audio-visual technology. When you enter one, you come face-to-face, live, full-body, with someone in an identical gold shipping container somewhere else on Earth. Participants at the Austin Portal on the St. Edward's campus are invited to enter for up to 20 minutes to converse live with a stranger abroad as if in the same room. Live interpretation is available.

Global perspective is pervasive at St. Edward’s University, both in and out of the classroom. With a network of 21 partner universities in 19 countries, including a branch campus in Angers, France, the doors to new worlds are open for students to prepare themselves academically, intellectually and culturally. Portals is just one more way students at St. Edward’s have the opportunity to gain a deeper understanding of what’s happening in the world today and the effect it will have tomorrow.

More on Portals
Since launching in 2014, Portals have connected more than 20,000 people around the world in intimate, one-on-one dialogues. Portals exist around the world in Afghanistan, Rwanda, Honduras, Mexico, Iran, an IDP camp in Iraq, a Syrian refugee camp in Jordan, and more. Prior Portals participants include U.S. Ambassador to the United Nations, Samantha Power; journalists Fareed Zakaria of CNN and Chris Wallace of FOX News; film producers and directors Doug Liman and Morgan Spurlock; artists Mary Ellen Carroll and Titus Kaphar; and many more. Global media has covered Portals, including The New York Times, The Washington Post,  ABC, PBS, FOX, and others. Portals at the 2016 Global Entrepreneurship Summit in Palo Alto, California, were attended by President Barack Obama, Secretary of State John Kerry, Secretary of Commerce Penny Pritzker, Under Secretary of State for Public Diplomacy and Public Affairs Rick Stengel, and Google co-founder Sergey Brin.

More about Shared_Studios
Shared_Studios is a multidisciplinary art, design and technology collective focused on carving wormholes across the world.

For press inquiries, please call or email Michelle Moghtader at 202-441-2950 and michelle@sharedstudios.com.