Group projects in her Communication courses prepared Deneice O’Connor ’08 for a fast-paced career as a propmaster, where peanut butter, duct tape and a coat hanger just might help her fix a car. 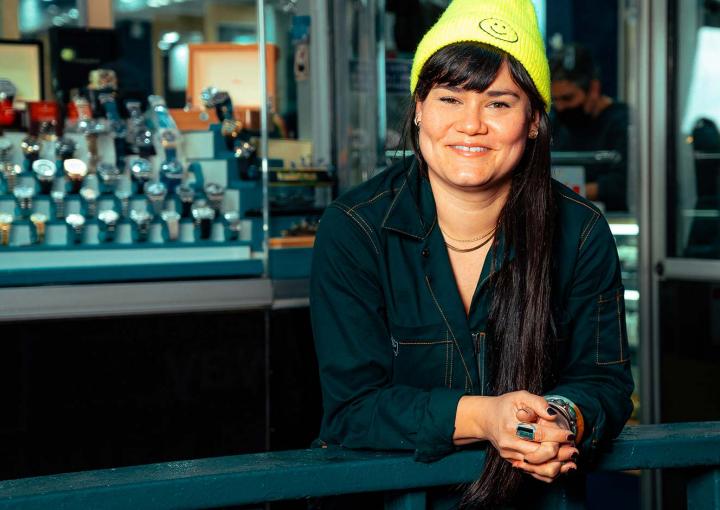 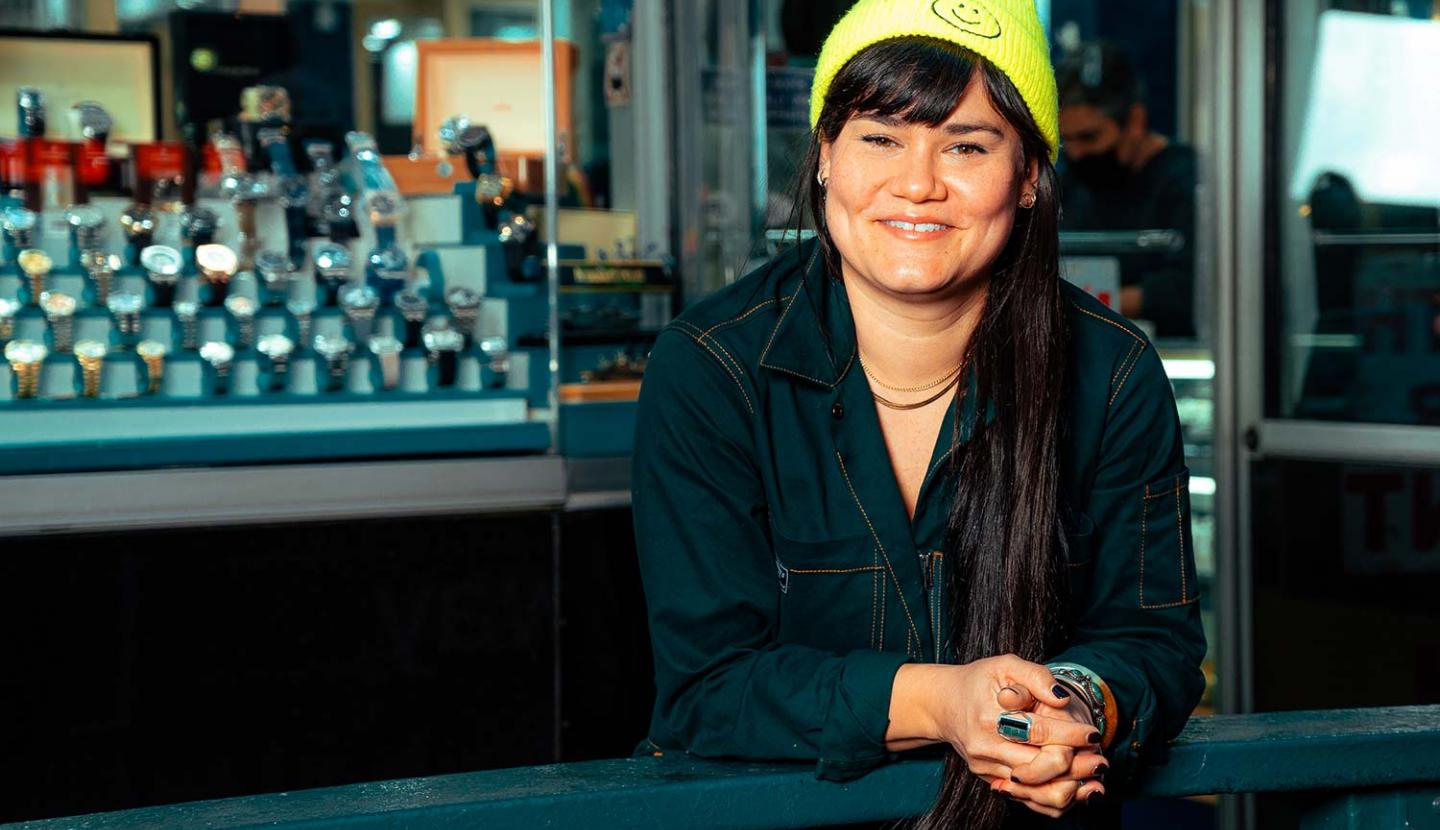 Standing on the set of the 2019 film Uncut Gems, Deneice O’Connor ’08 watched as actor Adam Sandler showed the titular gem, a giant opal, to NBA champion and fellow performer Kevin Garnett. As the on-set prop, O’Connor was responsible for fastening the correct Rolex watch around Sandler’s wrist in each scene, keeping track of the diamond-encrusted jewelry in his character’s showroom, and making sure the actors’ cell phones were charged.

Her job on the notoriously stressful-to-watch film, which follows Sandler’s character (a diamond dealer trying to hustle his way out of debts) had its own harrowing moments. O’Connor sometimes walked between the props truck and the filming location wearing a backpack full of Rolexes, real diamond jewelry, and thousands of dollars in real cash.

As she watched the scene unfold, Garnett accidentally knocked the giant opal into a chair, and a piece broke and fell to the floor. O’Connor turned pale. The “uncut gem” was made from several real opals sourced from all over the world, held together with a sculpting clay that looked like rock. It had gone through dozens of variations over several weeks until the directors were satisfied.

Just like the finished movie, the filming of Uncut Gems was particularly intense. But O’Connor is accustomed to high-stakes projects and solving problems on the fly. For the past eight years, she has worked in the props department in film and television in New York City. The job requires creativity, an eye for detail, impeccable organization, charm, and a host of obscure knowledge and skills.

“I’m part of the creative process, but I’m also thinking about money and logistics and talking to my vendors and trying to get deals,” she says. “You have to be chipper and friendly and a good communicator and be incredibly organized while also putting out fires. I didn’t go to film school, but St. Edward’s gave me just the right education for this.”

“You have to be chipper and friendly and a good communicator and be incredibly organized while also putting out fires. I didn’t go to film school, but St. Edward’s gave me just the right education for this.”

O’Connor splits her time between propmastering smaller jobs and working on bigger-name shows for her mentor, experienced propmaster Catherine Miller. When she works on a job with Miller, she has a specialized role like her on-set job with Uncut Gems or her current job as prop shopper on the Ben Stiller-directed dystopian comedy television series Severance.

Originally from San Antonio, O’Connor came to St. Edward’s with an interest in broadcast journalism. She majored in Communication and, through the late Marilyn Schultz’s broadcast journalism course and SEU TV, reported on the music scene and Barack Obama’s presidential campaign rally in Austin. In Professor of Communication Tere Garza’s Native American and Chicano Film class, she made a documentary about the immigrant detention centers in Central Texas.

“I was never great at writing papers and taking tests and studying, but I always loved class time and discussions,” she says. “I started to feel really good about myself when I took Tere’s class and Marilyn’s class because we were actually making things. I found that I was a doer.”

“I started to feel really good about myself when I took Tere’s class and Marilyn’s class because we were actually making things. I found that I was a doer.”

In those days, she loathed group projects because of the logistics and the challenge of distributing workload equitably. “And it hit me, after I came to New York, that my career has been one group project after another,” she says. “If you want to be good at your job, you’ve got to learn how to talk to everybody, understand what everybody’s roles are on set, and understand how you can help each other. The Communication classes indirectly fueled my career. They didn’t necessarily tell me how to break a script down or how to be on set, but they taught me how to communicate.”

After graduation, she took a film workshop with noted Austin director Kat Candler, who introduced her to The University of Texas film students and local directors who hired her to work on their projects. She gradually realized the props department, which demanded problem-solving skills in high-pressure environments, was a good fit. “My childhood was chaotic, so something that really suited me was being in the heat of the moment and being like, ‘Ok, I’ve got peanut butter, duct tape and a coat hanger, how am I going to fix this car?’ And figuring it out.” By the time she left Austin for New York City, in her mid-20s, she was propmastering small projects.

When O’Connor is hired to propmaster a production — leading the props team — she has anywhere from a few weeks to several months to prepare for shooting. She reads through the script with a highlighter, marking all the props she needs, then organizes them in a spreadsheet by character and scene. O’Connor has to work within the budget she’s given by the production manager, so she gets good at thrifting, reusing nondescript items like backpacks, and occasionally using product placement to wrangle free items. 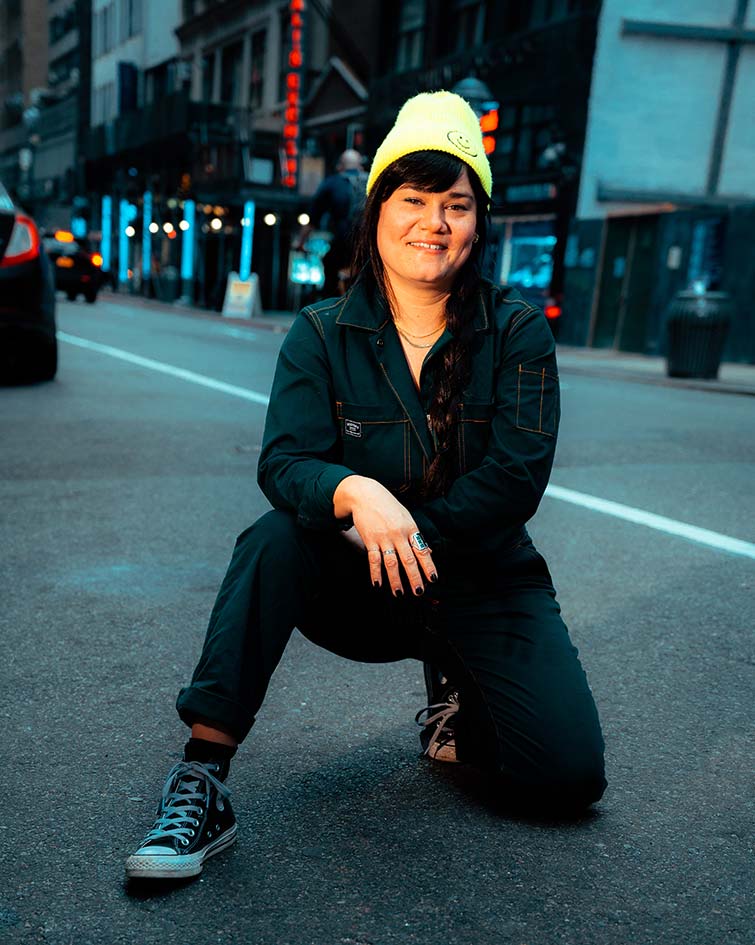 Those steps help offset costs that are larger than might initially appear. For example, a script might include a scene where a character smashes a wineglass against a wall. Cheap stemware is available at Target, but O’Connor needs to get goblets fabricated from a glass substitute that will shatter without hurting anyone. She also needs multiple goblets to accommodate multiple takes — so the price tag for the wineglasses can easily exceed $150.

This is the kind of knowledge O’Connor has picked up on the job, sometimes learning the hard way. Every important prop needs to be duplicated, which is why Garnett’s accident with the one-of-a-kind gem was so harrowing.

“If an actor’s running down the street and trips and falls and his cell phone breaks, and you’ve already shot half that scene, and you’re in your twelfth hour that day, and everybody wants to go home, and it’s 20 degrees outside, you want to be the superhero that says, ‘Don’t worry, I have five more of those,’” O’Connor says.

She’s also learned how to repair those cell phones, jumpstart cars, troubleshoot computers and arrange food artfully on a plate. “We’re all MacGyvers, because we have to do problem solving at the last minute when props will break or stop working,” she says.

O’Connor meets with the writer and director to talk through the props for the show and find out how much creative input she’ll have. Then she and her team round up sample props or photos of them for show-and-tell, where the director gives each item a thumbs-up or tells the team to keep looking. After that, they start shopping.

When O’Connor is able to offer creative input, she dives into the psychology of each character. What would this person’s favorite color be? O’Connor asks herself. Where does he shop? What kind of backpack and cell phone cover would he have? O’Connor likes to think about every detail. If the character went to college, he might carry a keychain with the university’s logo. If he’s an activist, he might have political stickers on his laptop or patches on his backpack.

People who work in props need to enjoy immersing themselves in a subject to understand the details that will make a show authentic, O’Connor says. “I learn about so many strange things,” she says. “My entire career is an education.” Her work on Uncut Gems introduced her to the largely Jewish culture on the stretch of 47th street in Manhattan called the Diamond District.

For her most recent job propmastering on the Hulu series Ramy, about a young Egyptian American Muslim man from New Jersey, she learned all about Egyptian food and culture. For an episode of High Maintenance, an HBO series about a bike delivery person in Brooklyn, O’Connor had to procure a hyper-realistic baby doll — the kind that costs thousands of dollars and can be mistaken for an actual baby. O’Connor went down an internet rabbit hole learning about the real-life community of realistic doll “moms” and met a woman who had bought one of the dolls after losing her own baby, then started making them. “At first thought, the people were strange, but then I met this woman and we got really close,” O’Connor says.

The ability to think three steps ahead is important for a props team member, too. Sometimes a writer is still revising scripts for the later episodes of a television series while filming is underway. O’Connor ends up juggling work on the set with finding props for future episodes. She might be helping reset a 12-person dinner during shooting of one episode while at the same time fielding a phone call about a tow truck needed for next week’s filming.

O’Connor had been about to start work on Severance when the pandemic forced the industry to shut down in March. Six months later the project resumed with stricter safety guidelines. Props can no longer be sourced on the fly, a change that’s slowed down the often-frenetic pace on set. “Before, the cameras could be rolling and at the last minute the director might say, ‘Oh, I think I want this character to eat Chinese food. Go run out and get some Chinese food really quick,’” O’Connor says. These days, props — especially food — have to be carefully screened and sterilized before they hit the set.

O’Connor used her unanticipated time off to get involved with the community, particularly the Black Lives Matter movement. Now that filming has restarted, she wants to maintain a balance among activism, specifically working towards diversity and inclusion on film sets, working specialized jobs on big-name projects, and propmastering smaller projects she feels personally invested in. “When I’m in charge, I only want to do a project if I really care about the script or the people,” she says. “I’ve worked hard enough where I can be choosy.”