Attending the 2015 Paris Climate Change Conference is just one of many impressive opportunities Chris Jackson ’16 took advantage of during his time on the hilltop. Some of his amazing activities are covered in this story we published in 2015. We recently caught up with Jackson to see where his St. Edward’s experience has taken him. Find out what he’s up to now at UC Berkeley in our Beyond the Hilltop update at the end of this article

In November 2015, 45,000 diplomats, world leaders, scientists and researchers converged in Paris, France, for the United Nations Framework Convention on Climate Change. Chris Jackson ’16 was one of eight American Chemical Society students (and future climate-change researchers) selected from universities across the United States to observe and learn as world leaders identified global targets for climate change.

Jackson didn’t get here overnight. His research started his freshman year in the Natural Sciences Living Learning Community, where students in the same field live in a shared wing of a residence hall, take classes together and work on research with faculty mentors. In Jackson’s case, the LLC experience led him to a six-week forensic chemistry research project under the guidance of now-retired Assistant Professor of Chemistry Don Wharry.

After that first experience, he found himself drawn to two very different research subjects, renewable energy and cancer — both pressing issues that would allow him to help people. “Some people do fundamental research, which aims to improve scientific understanding and theories,” he says. “But I would rather do applied research. I want my research to make a difference in the world.” 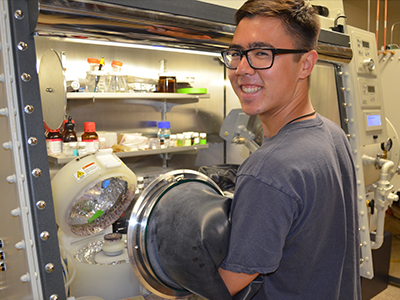 Unsure which direction to go, he applied to summer research programs all over the country and decided to follow the path that opened for him. Thus, he headed to the Stanford Linear Accelerator Center (SLAC) National Laboratory in California for a summer working on solar cells. That experience cemented his interest in hands-on applied research and convinced him that renewable energy was the right choice. The following year, he went after a research position at NASA’s Marshall Space Flight Center in Huntsville, Alabama, where he explored carbon dioxide reduction for the International Space Station.

Back on campus, he immersed himself in computational chemistry research — a new form of research for him that uses computers to solve problems instead of hands-on experiments — with Professor of Chemistry Tricia Shepherd. He has also relied on the mentorship of Associate Professor of Biology and Chemistry Mary Kopecki-Fjetland, who serves as his academic adviser and helped him through the process of changing his major to biochemistry and back to chemistry again as he focused his interests.

Jackson’s life isn’t all science, all the time. He competes for the Hilltoppers Division II varsity cross country team and is president of two student organizations, the Asian Student Association and the university’s chapter of the American Chemical Society. He also leads a Service Break Experience, which means he is traveling this January with a group of students to serve a community in need. 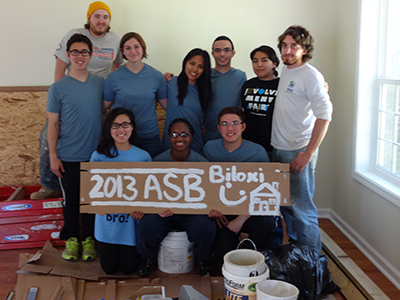 “During my freshman year, I joined the Habitat for Humanity Alternative Spring Break in Biloxi, which was affected by Hurricane Katrina,” he says. “Now, two years later, as I’ve moved into climate change research, I can look back on my time in Biloxi and wonder if my science can help us manage natural disasters in the future.” 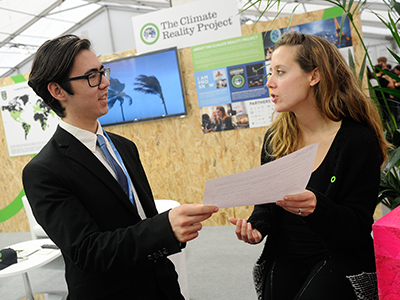 Attending the UN Convention on Climate Change, he hopes, will put him on a path to make a bigger difference in the world. Even more than research, he wants to move into the public policy side and raise public awareness of scientific concerns. He has already applied for a number of highly competitive scholarships and fellowships (and is in the running for both Fulbright and Gates-Cambridge scholarships) that will allow him to do that.

“There are so many big challenges,” he says. “I’m interested in renewable energy, but there’s so much more. How does climate change affect poverty? Health? Politics? How do we talk to the general public about these things? That’s what I want to work on.

Since graduating in 2016, Jackson continues to pursue his passion for science and service. Prior to entering a Chemistry PhD program at the University of California Berkeley in August 2017, he spent a year volunteering abroad with an orphanage in Jamaica and with a foundation in Thailand that serves adults with disabilities and children at a school for the blind.

Jackson was awarded a highly competitive National Science Foundation Graduate Research Fellowship ($34,000 annually for three years). At UC Berkeley, he serves as a Graduate Student Instructor and Graduate Student Researcher — 5-year appointments that cover his tuition, fees and other expenses.

“At Berkeley, I conduct research on nanomaterials for optoelectronic applications, such as solar cells or LEDs,” says Jackson. “I thoroughly enjoy the challenge of this work because it allows me to do fundamental science that also has direct ties to important energy applications.”

Outside the classroom and lab, Jackson has leadership roles in graduate student organizations such as the Berkeley Energy & Resources Collaborative, the Berkeley Science Policy Group and the Berkeley Science Review, a graduate student run magazine. “These groups allow me to interface with non-scientists and professionals in industry, government and many other fields,” he says. “We work to communicate the science being done at UC Berkeley and translate it into language that can be understood by non-scientists.”