A Biology professor and students track the health of bees in colonies on campus. 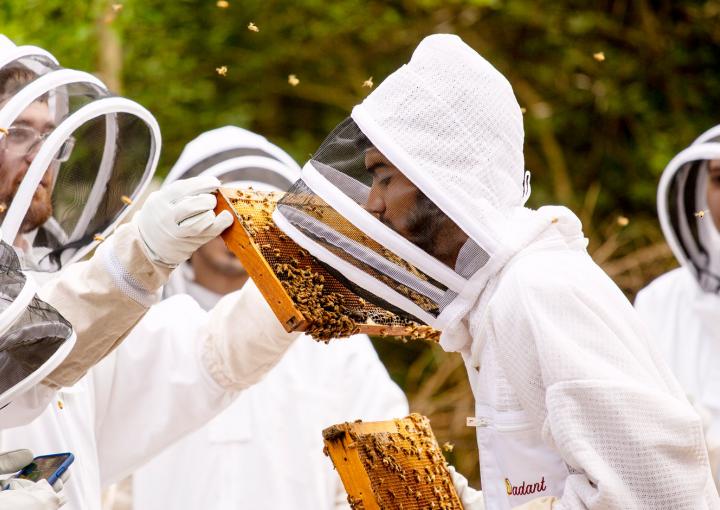 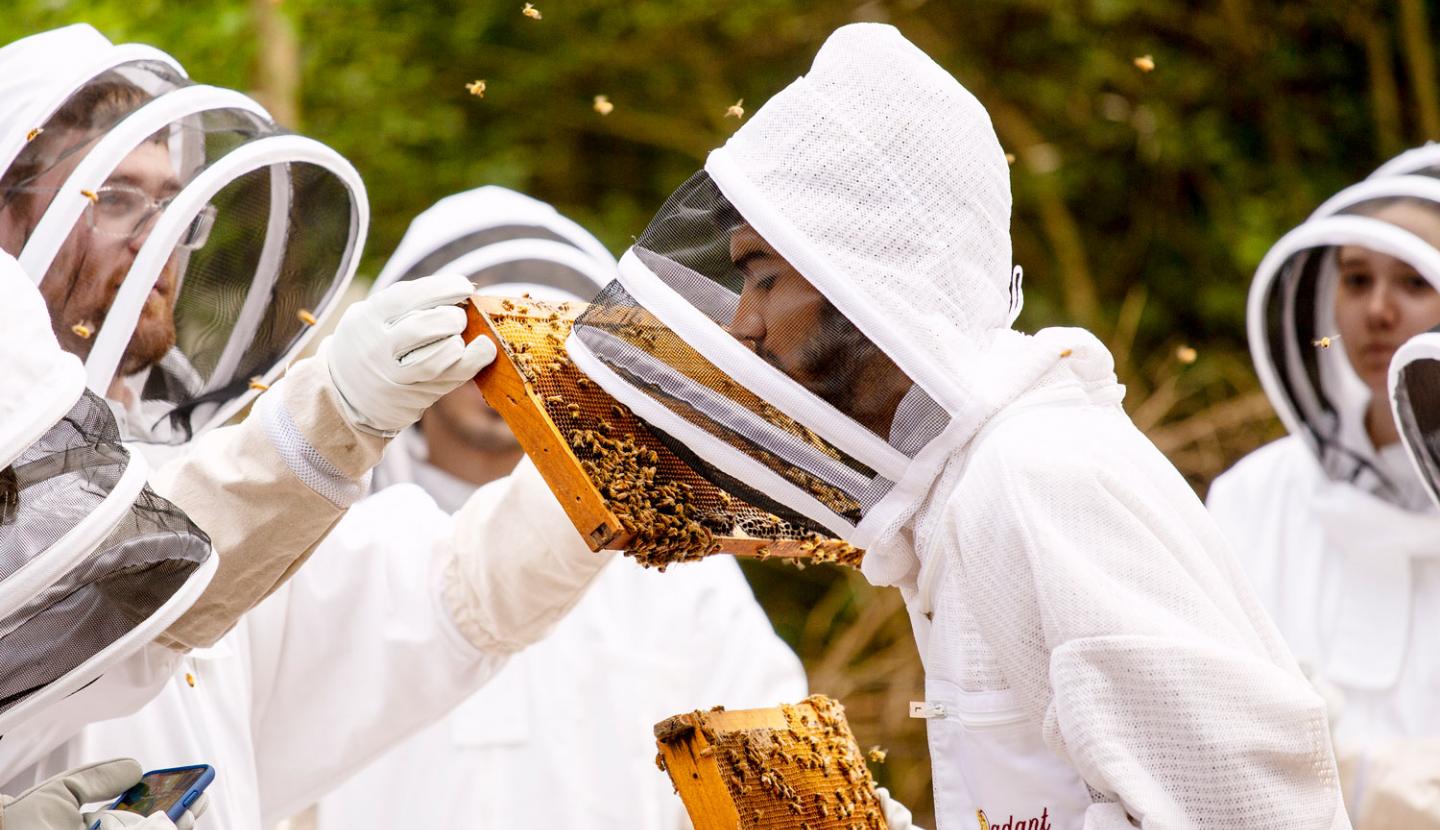 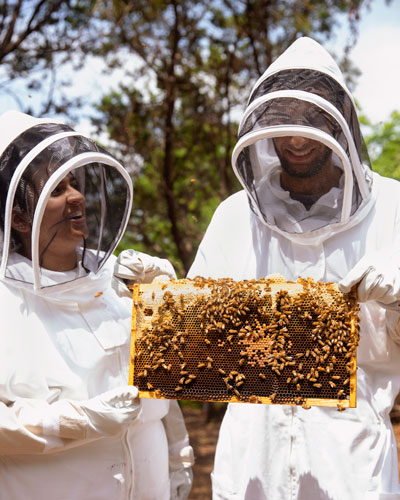 Priyanka Ranchod ’21 and David Weier ’19 inspect one another’s protective bee suits, making certain every piece is tightly fastened. They approach a clearing in the woods in a corner of campus where two honeybee hives, like white file cabinets, rest on a table inside a small fence. Bees dart through the air and squeeze through thin openings at the bottom of each hive.

The two Biology majors need to collect live bees for their summer research with Assistant Professor of Biology Matt Steffenson. Ranchod collected bees last week, and today she’s teaching Weier. She takes a vial from a black equipment bag and unscrews the top. “If you tilt it at an angle, they’ll crawl up into it, and then you can just close it.” She holds a vial next to a bee on the edge of the hive, and the bee crawls in. She quickly caps the vial and sets it gently in the bag.

Weier steps up to the hive. “Hey, friend,” he says, offering the vial to a bee near the hive’s entrance. “Anybody want to come with?”

As Ranchod and Weier work, the air around them gradually fills with a low humming as the bees, alerted to an intruder, emerge from the hives to investigate. The students breathe calmly — carbon dioxide attracts the insects — and work until they’ve collected 50 bees from each hive.

When they finish, Ranchod turns to Weier. “Do you want to look inside and see how they’re doing?” The team has refrained from obsessively checking the colony. Opening the hive disturbs its operations, but a peek every now and then is OK. Together the students gently open the hive and peer inside, where the mass of moving bees ripples like a single organism. 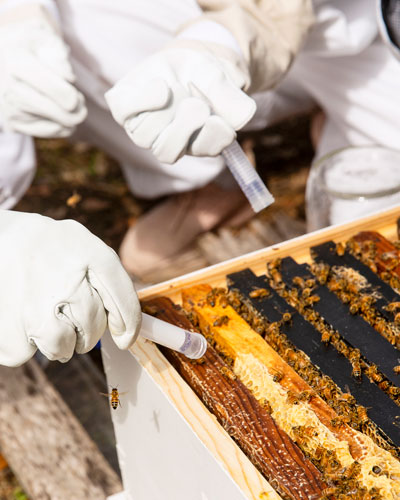 Ranchod carefully removes one of the wooden frames from the upper box. Golden comb spreads across the bottom, hexagon by perfect hexagon. “This is all new since last week,” she murmurs as she inspects it. As the colony grows, it will spread from the lower box, where the queen and most of the bees are now, into the upper box.

The sun emerges from behind the clouds, and heat builds beneath the students’ heavy white suits. Carrying the bags full of vials, they head up the hill toward the lab. 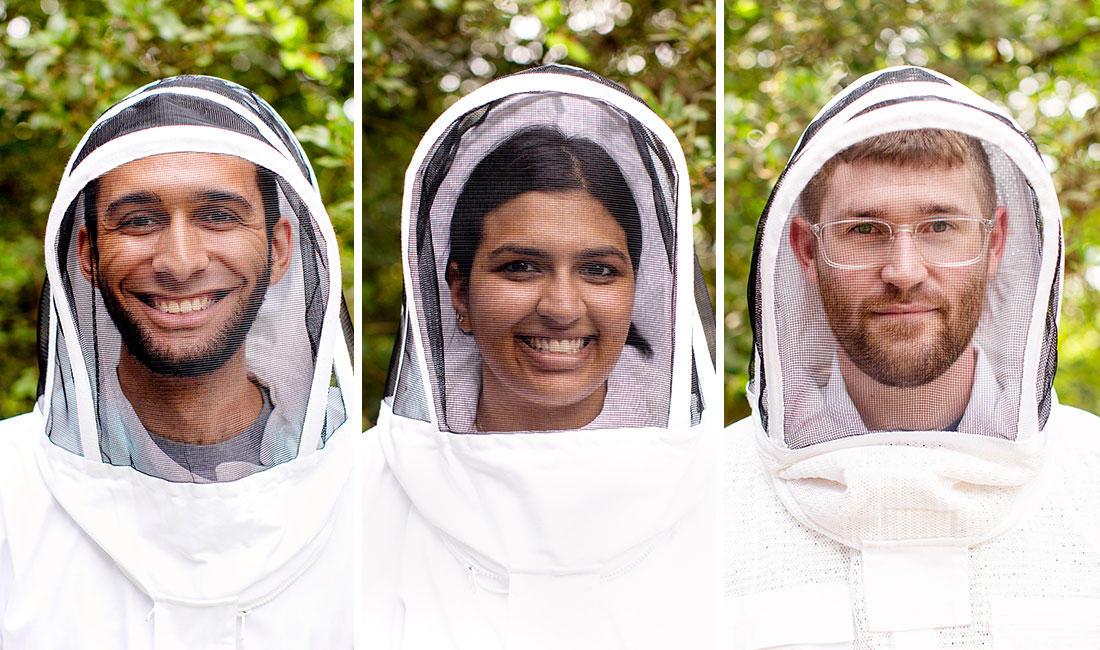 David Weier and Priyanka Ranchod are among several students who worked with Assistant Professor of Biology Matthew Steffenson to research what makes bees susceptible to colony collapse disorder (CCD), a threat to honeybee populations worldwide.

Suiting up for work

Biology students and Assistant Professor of Biology Matthew Steffenson put on bee suits to prepare to set up two bee colonies on the St. Edward’s campus. Once the colonies are installed, students will collect bees to bring back to the lab for research. 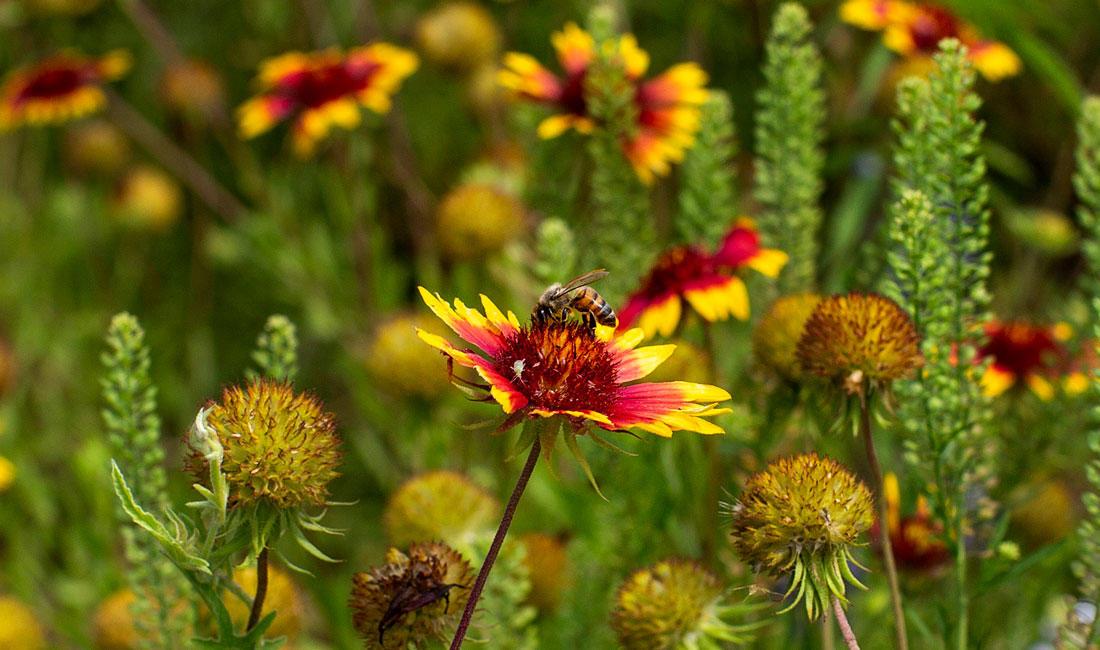 A bee collects nectar from wild flowers on the St. Edward’s campus. “Statistically, one out of every three bites of food you eat was pollinated by honeybees. Without bees, human health completely crumbles,” says Biology and Pre-Med major Kia Baeza.

Biology students David Weier and Priyanka Ranchod measure the amount of sugar water in a container. The water supplies supplemental food for the recently installed bee colonies as they acclimate to their new surroundings.

Assistant Professor of Biology Matthew Steffenson and undergraduate students begin setting up two hives of about 30,000 honeybees on the St. Edward’s University campus.

A Biology student breathes over the bees to make them buzz. Carbon dioxide attracts the bees and alerts them to the presence of others.

Biology students collect sample bees at the bee colony to bring back to the lab for research. In the lab, students run biochemical assays to measure the levels of proteins in the bees’ hemolymph, the equivalent of blood in bees.

Using a vial for each bee they collected, Ranchod and Weier gathered sample bees from the hives — 50 bees per hive, twice a week, for seven weeks — in order to conduct their research.

Searching for the queen

Assistant Professor Matthew Steffenson and Biology students look for the queen bee in a honeycomb formation. Steffenson wanted to understand how moving a colony affects the bees’ stress response and ability to fight off infection.

The queen bee, with a larger abdomen, lays eggs in the center of the masses. Each colony has a single queen who can lay up to 2,000 eggs a day in the summer. Over time, if the hives are healthy, they will grow to between 30,000 and 50,000 bees each.

To study the health of a sample bee’s hemolymph, which supports the bee’s immune system, Ranchod removes the bee’s abdomen with a scalpel. The bee research is being conducted in a lab in the John Williams Brooks Natural Sciences Center at St. Edward’s.

Biology majors Ranchod, Baeza and Weier collect hemolymph from bee samples. “All of us in the lab have similar passions. We’re here because we want to learn new things, and we enjoy the process of research,” says Ranchod.
Prev Next

The hives are part of Steffenson’s research into what makes bees susceptible to colony collapse disorder (CCD), which emerged as a threat to honeybee populations about a decade ago. CCD, a sudden disappearance of up to 90 percent of the worker bees in a colony, has become an object lesson in the dangers of pesticides or human-driven climate change. But Steffenson says bee death, including CCD, doesn’t have one clear cause. 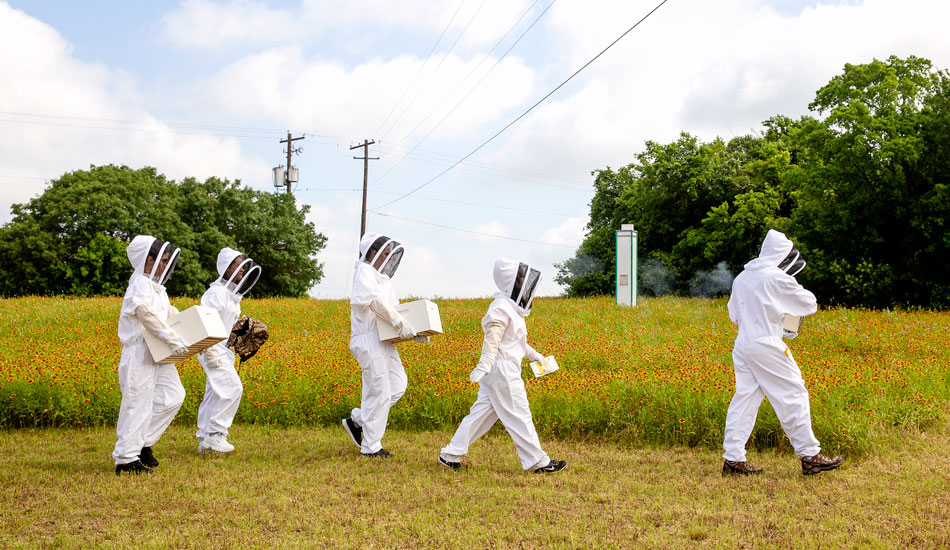 When people start keeping bees, or when beekeepers replace a colony lost to CCD, they often start a new hive with bees purchased and transported from an apiary. Steffenson wanted to understand how moving a colony affects the bees’ stress response and ability to fight off infection, and by extension, their susceptibility to CCD. The results may help beekeepers make more informed decisions about how to treat bees after a move. For instance, if his studies show that moving bees suppresses their immunity, beekeepers could treat recently moved colonies with antifungals or other medications to prevent infection. 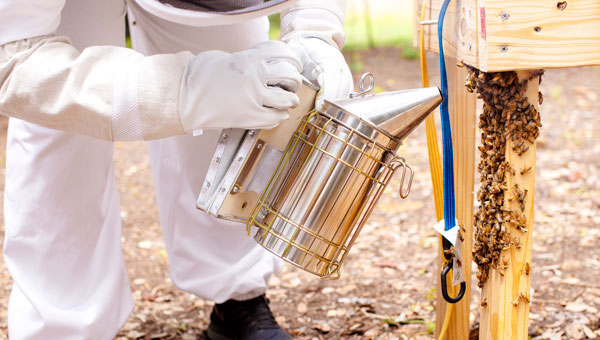 In May, Steffenson purchased two 15,000-bee colonies from an apiary in Dallas and, with students’ help, set up the hives. Each colony has a single queen who can lay up to 2,000 eggs a day in the summer. Over time, if the colonies are healthy, they will grow to between 30,000 and 50,000 bees each.

Last summer, Steffenson and Biology major Kia Baeza ’20 conducted research with honeybee colonies maintained by professional beekeepers off campus. The two studied how exposure to four commonly used pesticides affected the bees’ immune systems. Their analysis showed that pesticide exposure reduced the concentration of protein in the bees’ hemolymph — which is roughly equivalent to blood — potentially making them susceptible to pathogens.

Baeza spent this past summer applying to medical school and working at a hospital, but she submitted the research to a scientific journal this fall. She says her interest in the project combined her lifelong love of bees and her concern for human health. 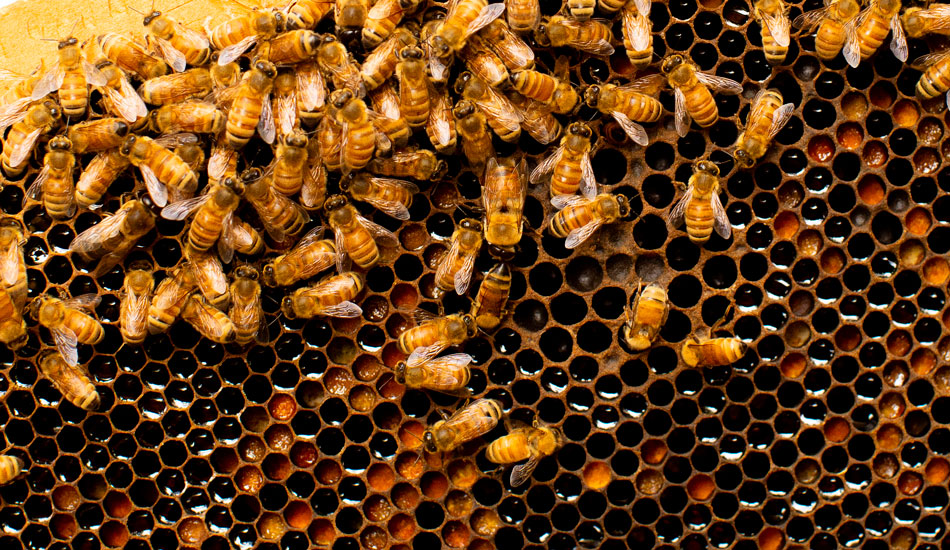 “My job as a physician would be harder without honeybees,” she explains. “Statistically, one out of every three bites of food you eat was pollinated by honeybees. Without bees, human health completely crumbles.”

Although Steffenson has been working with honeybees for five years, this summer marked his first foray into managing bee colonies himself. It’s a project he’s undertaking with coaching from area honey farmers — which, he says, makes his academic research unusually reliant on the knowledge of beekeepers in agriculture.

“I know the science side of things, but if you ask me to find a queen in the colony, which beekeepers have been doing for thousands of years, I’d have to rely on YouTube videos,” he says. “The project is this intersection between experts who are not scientists, and me with my science background trying to learn from them.” 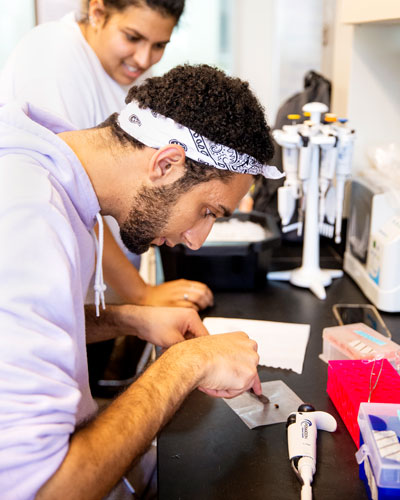 Back at the science building, in the aptly named McBee Lab, Ranchod and Weier hang up their suits and place the vials of bees in an incubator. A few vials go into a refrigerator. This step slows down the bees’ physiological systems, which reduces stress response in the immune system, immobilizes the bees and minimizes any pain they could feel from what comes next. (“We try to be as humane as possible,” Steffenson says. “These bees are essentially sacrificing their lives to improve our understanding of how to combat the problems they’re facing right now.”)

After five minutes, Ranchod pulls a vial from the fridge and places the sedated bee on a small piece of wax paper. Holding its head and thorax with forceps, she removes its abdomen with a scalpel.

Then she grabs the head and thorax with the forceps and squeezes until the hemolymph, the bee equivalent of blood, emerges. It’s a tiny drop of yellowish liquid, which Weier uses a micro pipette to collect. The students repeat the process until they’ve extracted hemolymph from all the bees, which they place in a freezer to halt the samples’ biological functions and protein degradation until they can analyze them.

Ranchod and Weier will spend their afternoon running biochemical assays on other samples to measure the levels of proteins in the hemolymph that are specifically associated with the immune system. And they’ll continue collecting sample bees from the hives — 50 bees per hive, twice a week — for a total of seven weeks. The data analysis will eventually show whether the bees’ immunology changes over time and, by extension, how the colony is faring in its new environment. 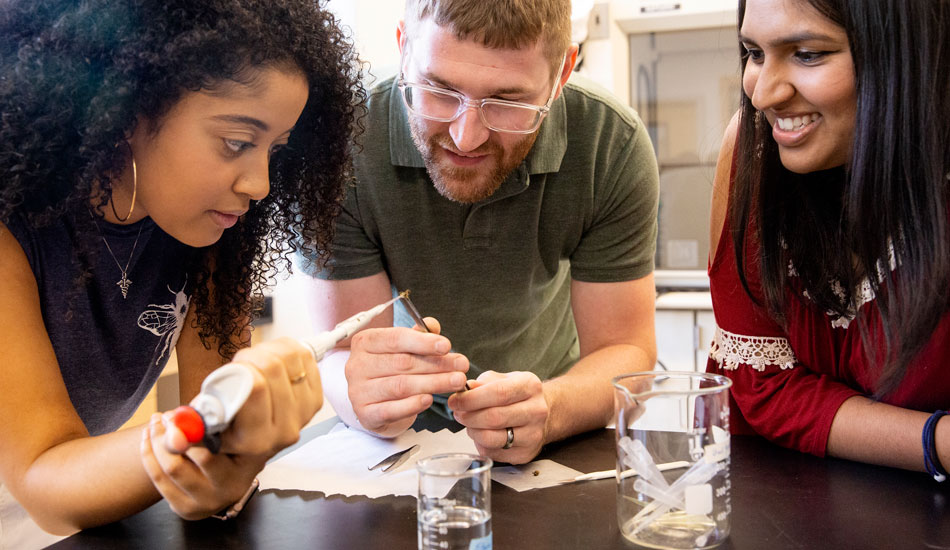 Like Baeza, Ranchod plans to become a doctor, and conducting research has prepared her for the reality that medicine won’t have an answer for every problem.

“What I like about research is that you never really know what the outcome will be,” she says. “In every step, you encounter more questions. I like that it’s challenging me to keep questioning myself, stay on my toes and discover more new things.”