Lessons from a World Leader

The President of Kosovo Brings an Inspiring Story to the Hilltop

“Traveling back in time, what advice would you give your younger self?” asked a student of the distinguished guest who stood before an audience in Jones Global Events Center. Atifete Jahjaga, former President of the Republic of Kosovo, had just completed a 45-minute speech to the St. Edward’s community. The President’s answer came with a smile — one of many that day that punctuated her positive outlook on the evolution and future of Kosovo’s newly formed democracy.

“I would say to that young girl, believe in yourself. Believe in your values. And have courage,” said Jahjaga. “There is nothing that cannot be done when you invest in your potential.”

The arc and accomplishments of Jahjaga’s career are a testament to that advice. After rising to the rank of Major General of the Kosovo Police, she assumed the presidency of Kosovo in 2011 at the age of 35. She became the youngest woman to be elected to any nation’s top leadership post and the first female president in the Balkan region. Though her five-year term ended in Spring 2016, Jahjaga remains Kosovo’s most ardent and internationally renowned proponent. 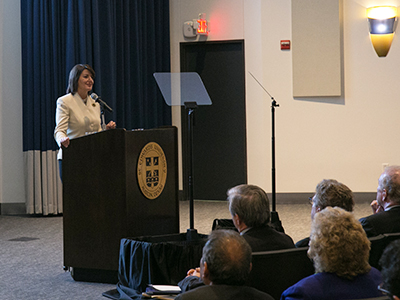 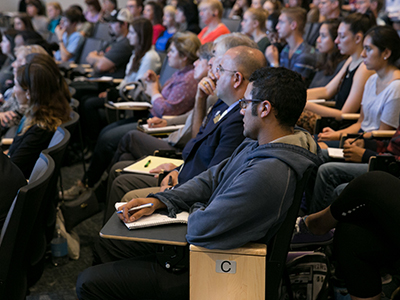 President Jahjaga’s visit to the hilltop in October was part of an annual series of programs sponsored by the Kozmetsky Center at St. Edward’s. The center brings experts, scholars and leaders to campus for lectures, classroom visits and panel discussions on critical global issues.

“It was an honor to welcome President Jahjaga to campus,” says Sharyl Cross, director of the Kozmetsky Center. “We invited her to share her perspective with students on the most important aspects of leadership, service and values, and on priorities ahead for Kosovo and the world community.”

Leading a Nation Torn by War

During her speech, Jahjaga reflected on the 1998–1999 Kosovo War and its turbulent aftermath, which led Kosovo to declare its independence from Serbia in 2008. She spoke about the challenges of guiding Kosovo’s transition to democracy — from developing an economy to fighting corruption to integrating a multi-ethnic society. And she stressed the importance of promoting alliances with Kosovo's Balkan neighbors and the wider global community.

“Today, after almost a decade of remarkable nation building, we have managed to recover, to overcome and to move forward,” she said. For Jahjaga, a vital step in her country’s healing is to pursue reparations for the war crimes perpetrated by Serbian militants against Kosovars, including acts of ethnic cleansing and sexual violence. Equally as vital she says is the empowerment of women throughout the Balkans. 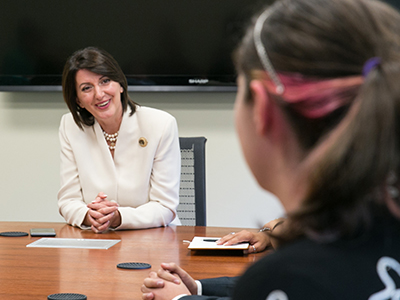 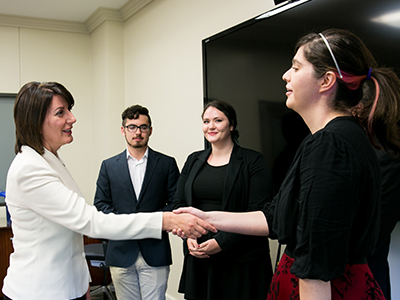 Learning One-on-One with the President

After Jahjaga’s presentation, Global Studies major David Menchaca ’18 and Mathematics major Crisel Suarez ’17 participated in a roundtable discussion with the President, other students and several faculty members. The group talked about Brexit, Kosovo’s path to membership in the European Union, and the rise in nationalistic rhetoric and Islamophobia in Europe and North America.

Menchacha and Suarez believe other countries can learn from Jahjaga’s leadership and diplomacy across a region of clashing cultures and politics. “The way President Jahjaga has helped Kosovo become more modernized, more tolerant and more recognized on a global scale brings hope that older democracies like the United States can overcome their racial and religious conflicts,” says Menchaca.

Suarez was impressed by Jahjaga’s commitment to inclusion, community building, and transparency between governments and citizens, which she says should be a model for future leaders. “Meeting President Jahjaga was an amazing opportunity and very inspiring,” says Suarez. “She showed me the kind of legacy we can create in our communities and the world.”

Service Is at the Heart of Our Campus

Only At St. Edward’s