3 Famous Writers Visit St. Edward’s and Share Advice on Their Craft and Life

For the serious student of writing, nothing is as inspiring as hearing successful authors speak about their craft. Students at St. Edward’s had the chance to meet three highly accomplished writers this fall when Jonathan Safran Foer, Mindy Kaling and Eula Biss visited campus. The three read from their work and answered students’ questions about everything from finding story ideas to getting over writer’s block. Two more award-winning authors will visit campus this spring to share their work and encourage students in their own creative journey.

It might surprise readers that Jonathan Safran Foer, the author of three bestsellers, only decided — consciously — to become a writer four years ago. During his Sept. 20 campus visit as part of the Marcia Kinsey Visiting Writers Series, Foer read from his latest novel, Here I Am. The book focuses on two crises, one personal (the revelation of an infidelity) and one geopolitical (an earthquake in the Middle East), that force characters to make difficult choices. Foer told students that he had written his first book in college, and the second shortly thereafter, riding the same momentum — but he had not intentionally set out to pursue a career as a writer. For the next few years, he worked on other projects, including an HBO show he cancelled at the last minute when he realized that what he most wanted to do was write books; that’s when he started Here I Am. 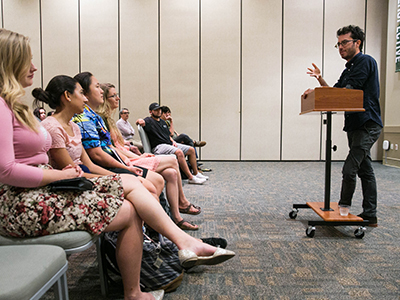 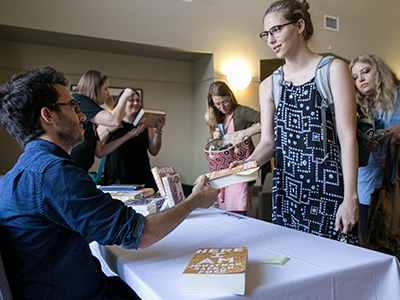 In response to student questions about the writing process, Foer shrugged off the idea that crafting good sentences is difficult. “What’s very hard is not stopping,” he said, adding that of the hundreds of students he’s taught, only half a dozen have continued writing after college. The best protection against stopping, he said, isn’t a commitment to sit at a writing desk for a certain number of hours each day or write a certain number of words; it’s genuinely wanting to write what you’re writing.

Asked whether he starts a novel with an outline, or a character study, Foer shook his head — when he begins a project, he said, he has no idea where the story will go. All he has when he starts is a detail or two — “At most I have a little itch, Wouldn’t that be interesting?” — which he can only figure out by writing for a while to see what happens. By way of illustration, he asked the crowd how long it would take to drive to the Alamo (90 minutes) and offered a comparison: A person could drive directly to downtown San Antonio to visit the Alamo, he said, or could instead choose to drive for 90 minutes with no particular destination or map. “One of those latter paths will be much more interesting than going to the Alamo,” he said. In writing, “the thing that I stumble upon will be better than the thing I set out to find.”

The Texas Teen Book Festival brought to campus several thousand readers of young-adult fiction — ranging in age from sixth grade to fortysomething. It also brought Mindy Kaling, writer and star of the TV show The Mindy Project, and a writer and cast member of The Office. Kaling’s two books, Is Everyone Hanging Out without Me? (and Other Concerns) and Why Not Me? blend memoir and advice for teens and adults alike. Kaling sat down with Sarah Pitre, founder of the website ForeverYoungAdult.com and senior director of programming and promotions at Austin’s Alamo Drafthouse, for a conversation about Kaling’s adolescence, structured as though it were a YA novel. 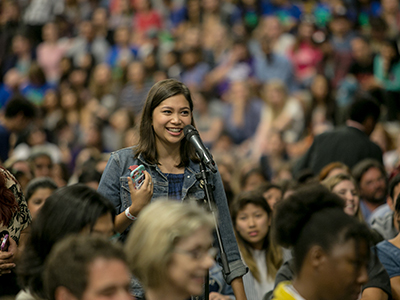 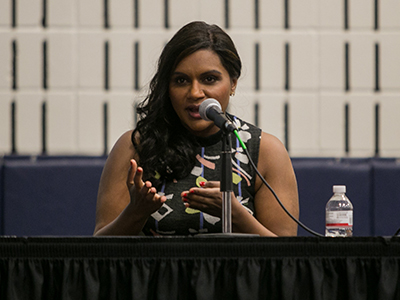 Asked what “Mindy the protagonist” was like, Kaling described her adolescent self as “a friendly, chubby kid who liked talking to people but was overlooked at school.” She read voraciously — Edith Wharton’s House of Mirth was a favorite —and began writing to fill the hours she spent waiting in her mother’s medical office after school. At age 8 or 9, when she realized that writing for television was a career option, she began watching episodes of Monty Python and Saturday Night Live on repeat, transcribing them to understand how comedy was written.

In her books Kaling urges readers not to “peak in high school,” and Pitre asked for elaboration.

“Nobody I knew who was cool in high school stayed cool or has a life that I would want,” Kaling answered, acknowledging with a laugh that such a declaration sounded harsh. “If you peak in high school — congratulations, keep that going. If not, you can use that time to take notes.” She closed with a piece of advice she gives in Is Everyone…?: “I just want ambitious teenagers to know it is totally fine to be quiet, observant kids.”

“One of the pleasures of writing from research is ending up in an unexpected place,” Eula Biss told an audience of students on Oct. 3. As part of the Marcia Kinsey Visiting Writers Series, the essayist and poet read from On Immunity: An Inoculation, a 2014 finalist for the National Book Critics Circle Award for criticism. 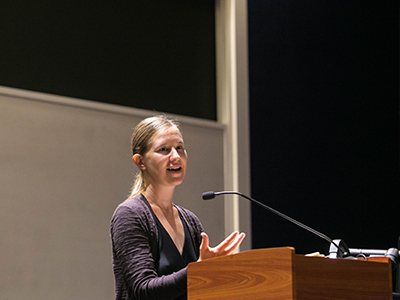 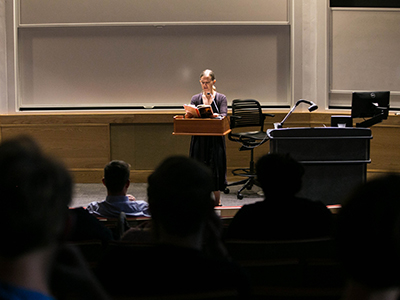 On Immunity began with Biss’s research into vaccines, during which she discovered that an anti-vaccination movement in Victorian England used vampires as a metaphor for vaccines. “Vampires kind of took over the book,” she explained, before reading selections from the book that danced between her research on historical attitudes toward immunization, contagion and blood, and accounts of a medical complication and blood transfusion she experienced after giving birth to her son.

Biss suggested that “writer’s block” can arise because a writer wants to make a point but is, at some level, afraid to. In young people, she said, it can because students don’t yet feel they have a right to say something. Or it can be a result of feeling overwhelmed. The antidote, Biss says, is just to get some words on the page. “I tell my students that I consider writing a problem-solving activity,” she said. “It’s like higher math, where you have to solve problems — you don’t wait for divine inspiration.”